Accessibility links
Review: 'Dumbo' Is Forgettable Tim Burton's take on the classic Disney animated feature does what it sets out to do in a kid-friendly, safe and unsurprising way devoid of the director's onetime idiosyncratic flair. 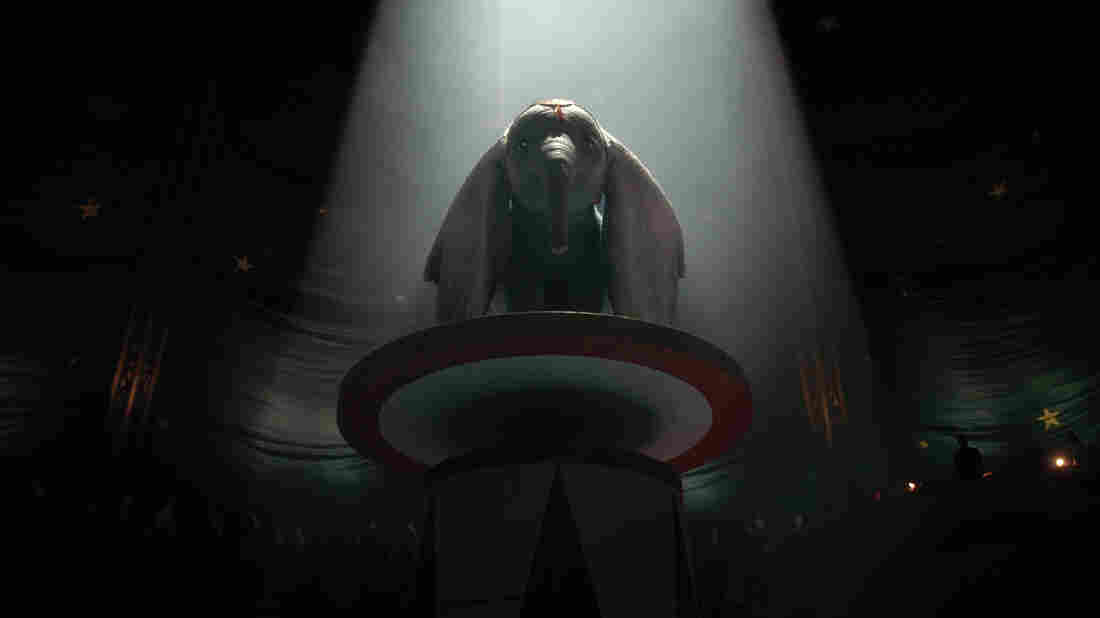 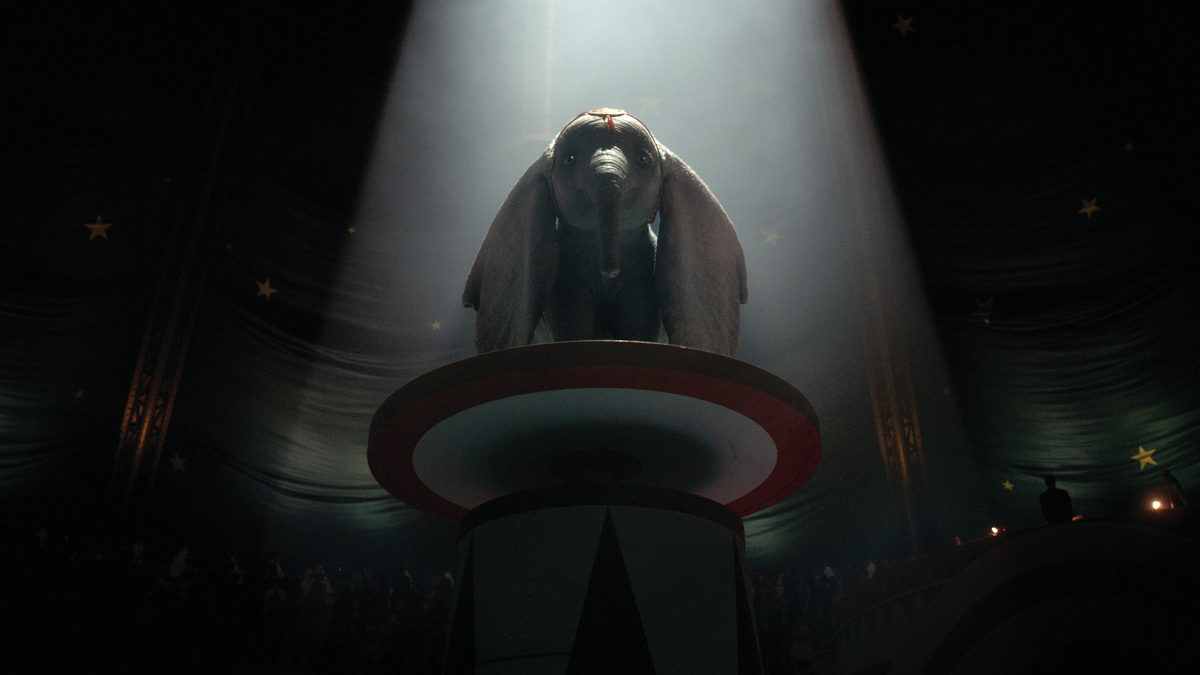 Dumbo, the first of three live-action(ish) remakes of beloved Disney cartoons due in the next four months (Aladdin is coming in May, The Lion King in June), coulda been a contender. Its director is Tim Burton, who began his career as an animator, and who has periodically returned to that medium for heartfelt, handmade pictures like Corpse Bride and Frankenweenie. More recently, Burton is the filmmaker most directly responsible for this cartoon-reclamation trend: His 2010 re-imagining of Alice in Wonderland took in more than a billion dollars around the world. Do you know anyone of any age who likes that film? Dumbo is better, but that's a bar any able-bodied adult elephant could clear, no unusual talents necessary.

Once the most idiosyncratic of big-studio filmmakers, Burton has long since become a company man. This efficient, indistinct Dumbo could've been directed by any number of Chris Columbuses or Brad Peytons or Jon Favreaus (who made 2016's The Jungle Book and that upcoming digitized Lion King) — able project managers all, and not a one of them possessed of the fevered imagination to pull off a Beetlejuice, never mind an Ed Wood. The docile Burton we have here is the one Warner Brothers' wished they'd had on Batman Returns a generation ago, when parents and a certain billions-and-billions-served burger chain screamed about how the blockbuster sequel turned out awfully weird and kinky and violent, for a film they'd worked so hard to sell to children.

Friends, Romans, merchandising partners: Breathe easy. Burton's Dumbo is just as kid-safe — and just as sad, in its tale of ostracism and familial separation — as the 64-minute original from 1941. Dumbo '19 runs 50 minutes longer and features a 700 percent increase in major speaking roles for humans, a 100 percent decrease in peptalk-dispensing mice and gossiping lady pachyderms, and a complete erasure of racial-caricatures-as-singing-crows. The memorable pink-elephant sequence, hallucinated by little Dumbo after a clown spikes his water bowl, is here re-imagined as a clean-and-sober soap-bubble display at the circus where Dumbo becomes a star attraction.

Ehren Kruger, the screenwriter of three heartwarming Transformers sequels, has opted to set his version of the story exactly a century in the past, in an idyllic American Midwest that Burton has created entirely on soundstages in England. The digital animals are more lifelike than the screensaver-y sunrises and sunsets, which give the movie what little color it has. Save for some practical sets, the only element not conjured via code is the cast, which features Colin Farrell, Eva Green, and Batman Returns alums Danny DeVito and Michael Keaton, all four of them easy to watch even while tamping down their wilder instincts and delivering arrow-straight performances.

Well, maybe not Keaton, sporting some odd vocal tics (and Lindsey Graham's haircut) as V.A. Vandevere, a Walt Disney-like tycoon who shows up halfway through the movie to lure Dumbo & Co. to work for him at Dreamland, his just-opened destination theme park. Alan Arkin is here, too, as J. Griffin Remington, Dreamland's chief investor. (Those character names are the most imaginative writing in the movie.) Arkin pops off his handful of lines as though he's being paid by the exclamation point, but at least he's not walking on digital eggshells.

Farrell plays Holt Farrier, a former horse trainer and stunt rider in DeVito's Medici Brothers' Circus, who has just returned from the battlefields of France minus an arm. During his stint as a soldier, influenza took his wife, leaving him alone to raise their two dewy-eyed kids, Milly (Nico Parker) and Joe (Finley Hobbins). When Holt suggests Milly develop an act for the show, she tells him she's going to be a scientist because "Maybe I don't need people looking at me all the time." Ouch. Financial pressure has forced DeVito's genial showman to sell Holt's horses, so he charges the veteran with looking after the pregnant pachyderm he's just bought hoping that an adorable baby elephant will bring the crowds back. That also means that when the baby arrives sporting those massive ears, Holt gets the order to... fix the problem.

That the plot involves having DeVito's modest family-run circus being swallowed up by a mogul with his own theme park is almost too obvious a metaphor for the back half of Burton's 35-year career. There're things to admire here: Green, appearing in her third Burton joint, has a warmth she's rarely called upon to display as Colette Marchant, a French aerialist whom Vandevere wants to cast as Dumbo's jockey. The sequence in which Ma Jumbo gets locked up and eventually shipped away for defending her little Dumbo from bullies, taken straight from the 1941 film, has an emotional heft (and a political resonance, however accidental) that lingers no matter how calculated its design. But I'm grasping. The only creatures likely to remember this Dumbo a year from now are elephants.