Accessibility links
Prominent Christian Book Retailer, LifeWay, Closing Brick-And-Mortar Stores Evangelical Christian book retailer LifeWay is closing its stores by the end of the year. Some lament the stores' end, while others say LifeWay sells too narrow an understanding of Christianity. 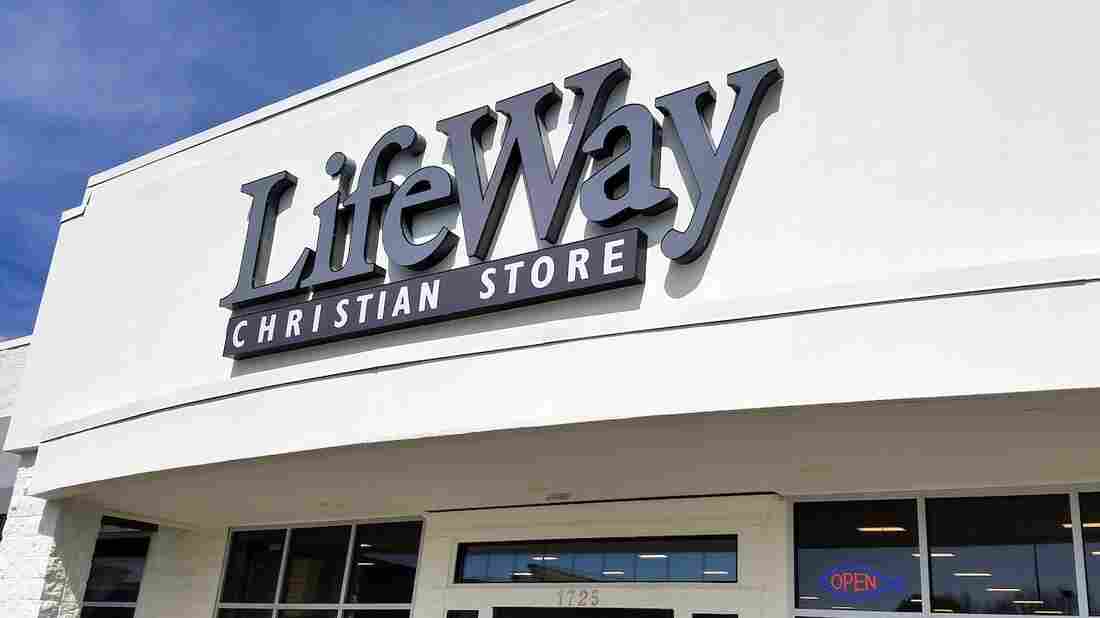 LifeWay Christian Store, the retail arm of the Southern Baptist Convention's publishing company, plans to close all 172 of its outlets by the end of 2019. Chas Sisk/Nashville Public Radio hide caption 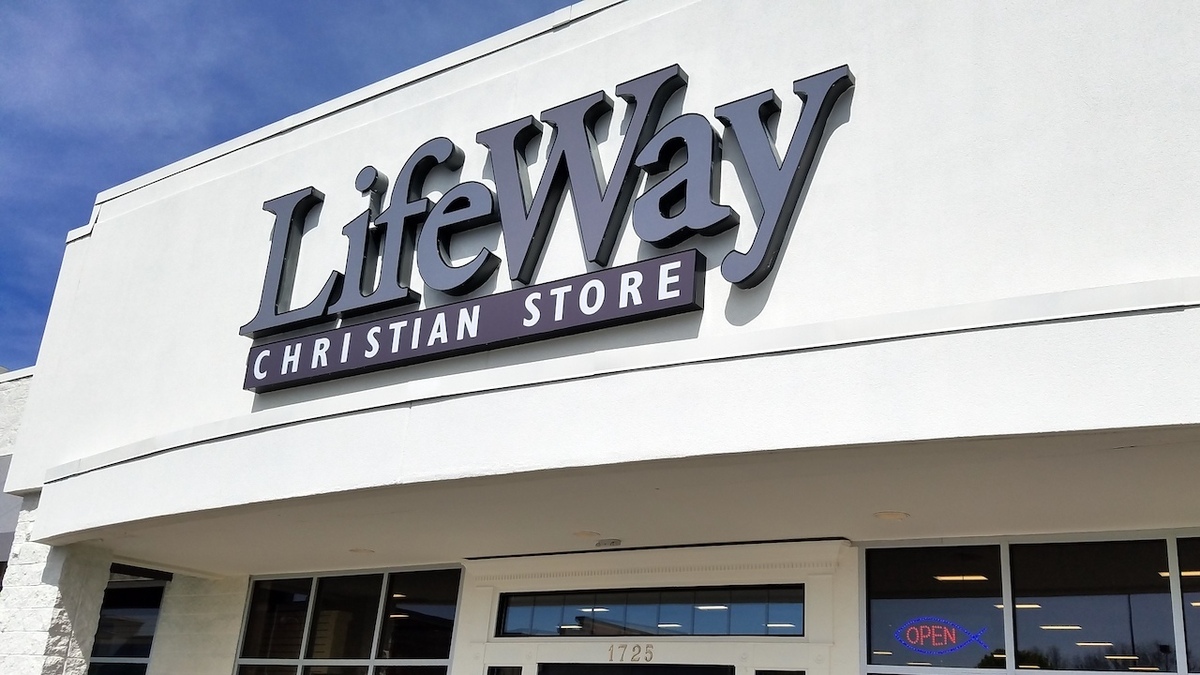 LifeWay Christian Store, the retail arm of the Southern Baptist Convention's publishing company, plans to close all 172 of its outlets by the end of 2019.

LifeWay Christian Stores plans to close all of its locations by end of the year and move all of the company's retailing online. Its bricks-and-mortar division has been losing money since 2013, and the company says it has tried just about everything to keep the business going, including overhauling several stores last summer and experimenting with features like coffee bars.

Some of those innovations succeeded in increasing foot traffic. But nothing increased sales, which the company says plunged by more than 10 percent again over the Christmas shopping season.

"That's kind of when we knew that we were going to have to make a change," says Chief Executive Brad Waggoner.

LifeWay is more than a bookseller. Its history goes all the way back to Reconstruction, just after the Civil War, when it started producing Sunday school materials for Baptist churches. That grew into a church supply business and two publishing imprints, Broadman and Holman, now known as B&H Publishing.

The brick-and-mortar strategy was there to be salt and light.

Even today, publishing and hosting evangelical conferences remain its bread and butter.

The company didn't get into retail until about three decades ago, when box stores like Barnes & Noble and Borders were taking off. But those chains typically devoted just a few shelves to faith and spirituality.

LifeWay opened stores that sold nothing else.

"The brick-and-mortar strategy was there to be salt and light out in those communities and to assist churches in doing what they do," Waggoner says, referring to biblical verses that call on Christians to be the "salt for the earth" and "light of the world." "So it's always been motivated by the ministry impact."

Five years ago, Susan Oaks found herself starting over.

Widowed after 41 years of marriage, she had moved from a dirt lane outside Fredericksburg, Va., to a high-rise in Nashville, Tenn. Oaks decided she needed to meet people. So she turned to the nearest LifeWay store.

"This is where I've been able to come and hang out and call it, you know, 'my secret place.' "

Oaks says she spends hours at a time at this LifeWay store in the Nashville suburb of Cool Springs. There are a coffee bar run by a Christian nonprofit, a friendly staff that shares her evangelical beliefs, and racks of inspirational merchandise. 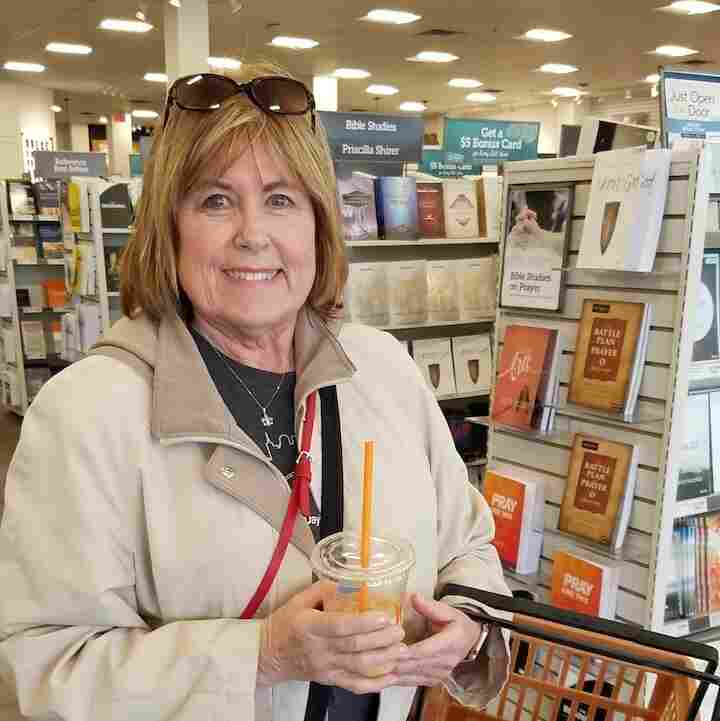 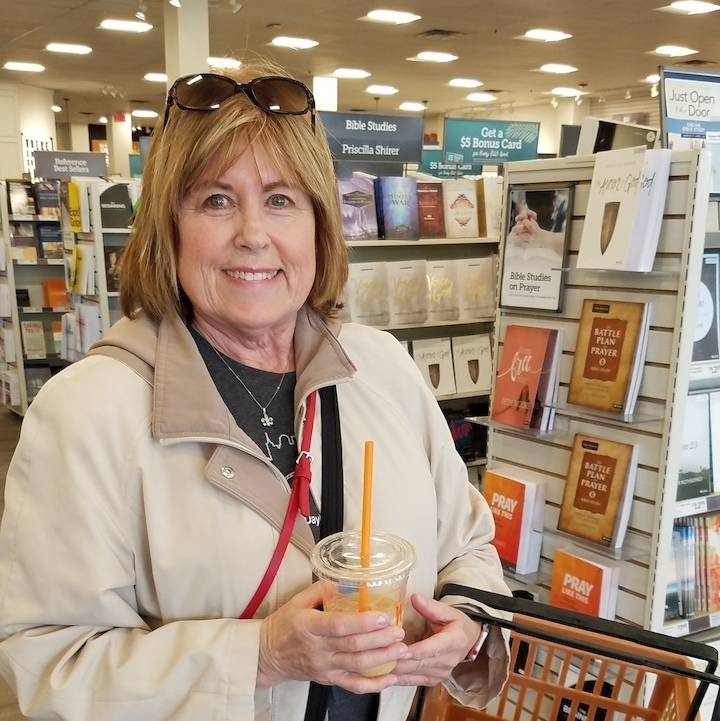 Nashville resident Susan Oaks says she frequently spends hours at a time at LifeWay stores, including the company's location in Cool Springs, Tenn.

On this day, she is buying greeting cards, faith-based DVDs and a romance novel set in Amish country.

"I can pick up a book and sit here and read and then have people come up and talk to me," she says, "So, it's not as though you're having worship ... but here, I have personally a connection because I feel the presence of God."

The company peaked at 184 stores in 2013 and has closed only a few stores. CEO Waggoner says they tried to hang on — largely because they felt the stores provided a service to evangelicals like Oaks.

Influence on the Christian book market

LifeWay doesn't exclusively sell things that it publishes, but decisions about what to stock are guided by Southern Baptist standards: Whether customers buy VeggieTales, a children's series in which table foods act out Bible stories, or the latest album by Christian artist TobyMac, customers are assured it conforms to evangelical theology.

"We ask people to trust that we're going to provide things that are in line with the Bible," Waggoner says.

But some people think that focus might have been a factor in LifeWay's decline. The company's focus on evangelicalism could be off-putting to others, including other Christians.

Christian author Rachel Held Evans grew up in an evangelical household in Dayton, Tenn. Today she identifies as Episcopalian and writes about her struggles with faith, including Christianity's historic relationships with women and LGBT people.

She says the chain's large presence in Christian bookselling has affected authors — even those, like her, who aren't published by LifeWay.

Evans hopes LifeWay's decision to get out of bricks-and-mortar retail will loosen up Christian publishing. But, she confesses, a bit of her still hates to see another bookseller close its doors.

LifeWay officials stress that they're not getting out of retail entirely. The company's website will still offer Christian-focused books, DVDs and other materials.

LifeWay recently opened a new headquarters, abandoning its downtown high-rise that has since been torn down and, in an ironic twist, is being redeveloped for 5,000 Amazon jobs expected to land in Nashville in a few years.

Closing the stores, says Waggoner, will allow the company to focus on other priorities. Those include expanding LifeWay's digital products, offering more materials overseas in languages other than English, and continuing its robust conference division.

"We're going to continue to make content available in all kinds of ways to all kinds of people," Waggoner says. "So we're not backing off at all with what we're trying to provide the public. In fact, we're going to double down on taking advantage of all the different ways we can get biblical content out there."

Chas Sisk's last name was previously misspelled as Cisk in both photo credits. And Fredericksburg, Va., was incorrectly referred to as Frederickburg.