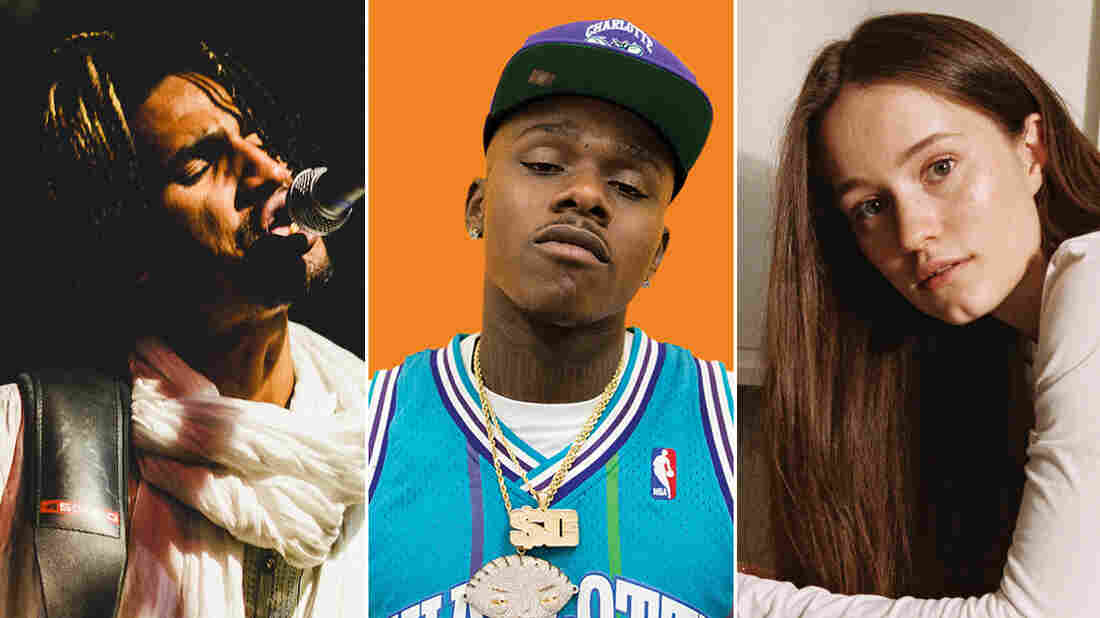 Mdou Moctar, DaBaby and Sigrid made some of our favorite songs from the month of March. Courtesy of the artists hide caption 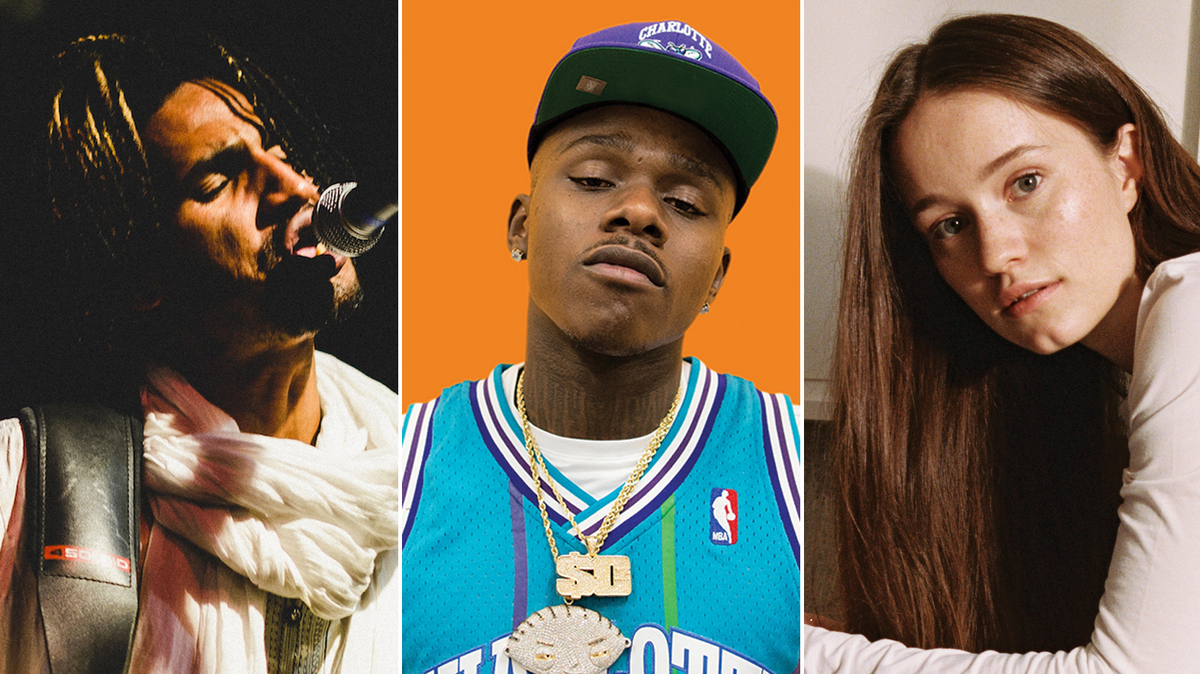 Mdou Moctar, DaBaby and Sigrid made some of our favorite songs from the month of March.

A meditative quality lingers over our favorite tracks from March. U.K. rapper Dave crafted a 11-minute opus to an acquaintance, grappling at once with toxic masculinity, domestic violence and the cathartic value of therapy. LA rock star-on-waiting SASAMI wades into a solitary quest for universal connection. Caleb Burhans shares his entrancing tribute to the late Jason Molina. And Amanda Palmer unleashed a grand treatise on the human condition. Nevertheless, there's moments of mirth here, too — Maren Morris linked up with the Brothers Osborne for a front-porch celebration, viral rapper DaBaby partners with Offset for a standout that belies his goofy origins, and Austin fixture Grupo Fantasma infuses its cumbia-laden funk with a resounding statement for unity.

Below you'll find a complete, alphabetized list of NPR Music's favorite 10 songs for March, as well as a Spotify playlist to hear them. And be sure to check out the 10 best albums we heard in March, too.

This beautiful and meditative tribute to the late singer-songwriter, performed by Irish guitarist Simon Jermyn, is composer Caleb Burhans' wistful dispatch to a cherished friend he never met. The music unfolds slowly before shifting into a mesmerizing groove that takes the mind into a very deep space. —Tom Huizenga

Singer Jorja Smith's voice is a beautiful beacon of light in this wistful and affecting reflection on youth and lost years from the British hip-hop artist Loyle Carner. "I got a lot of love and a lot of loose ends," he laments on the chorus, "A lot of people that I wish I knew then." —Robin Hilton

Poised and precise in her singing and ace guitar playing, 20-year-old Madison Cunningham might not conjure a comparison to Fiona Apple on first listen, but this song named after Orange County's airport, with its wonderfully tangled imagery and cutting self-awareness, shows she's an heir to that queen's powerful throne. —Ann Powers

In March 2017, DaBaby walked around SXSW Music Festival wearing a diaper — and little else — to promote his music. The spectacle went viral, but the music didn't quite follow. Two years later, sans Pampers, the North Carolina upstart has fans losing their minds over his major label debut, Baby on Baby. And while tracks like "Suge," "Walker Texas Ranger" and "Goin Baby" have predictably taken off thanks to comical music videos, the highest compliment you can pay this newcomer is to spin "Baby Sitter," which features Offset of Migos. At just 2:38, it's a great primer for everything that makes DaBaby stand out: It's bouncy, aggressive, didactic and shows off his hopscotch flow against the backdrop of a bass rattler. —Sidney Madden

Mountain Man's Alexandra Sauser-Monnig reintroduces herself as Daughter of Swords — and announces her presence with a slice of poppy folk music so sweetly radiant, it's essentially a summer sunbeam in song form. —Stephen Thompson

U.K. rapper Dave's first major-label LP, Psychodrama, climaxes with a haunting 11-minute orchestral ode to "Lesley." An emotionally wrought story about a friend who falls victim to an abusive mate, it doubles as a metaphor for the toxic masculinity plaguing all women. —Rodney Carmichael

Grupo Fantasma is an institution in Austin, Texas, thanks to their smart mix of funk and various Mexican dance genres. They band is so talented that Grupo has spun off at least three other studied bands that highlight the various strengths of the individual members. Its newest album, American Music: Vol. VII, celebrates funky cumbias and this track is a straight ahead funk collaboration with West Coast funk compadres Ozomatli and South Floridian reggae-inspired funksters Locos Por Juana. "The Wall" is just what the title suggests: a politically charged, inspired takedown of the proposed barrier between the US and Mexico. —Felix Contreras

For the past few years, there's been much hand-wringing over the implications of artificial intelligence's increasing sophistication. The most interesting area of concern is art: What will we say makes us human, when a computer knows how to make us feel? Holly Herndon is one of the most well-known (and brilliant) artists sprinting toward that creative singularity. One of the contributors to her upcoming record, PROTO, is Spawn, an AI baby that she and her collaborators have been potty training for some time. Its development — that's an unsettling thought — is the subject of PROTO, and "Eternal" sounds like Spawn's heart cracking through the eggshell, poking into the real world. —Andrew Flanagan

One of the unsung heroes of electronic soul and R&B, Shafiq Husayn reconnects with frequent collaborator Bilal on "Between Us 2," a highlight from his new LP, The Loop. The song blends samples and live instruments at the highest degree of precision, a method that he and his Sa-Ra Creative Partners perfected more than 10 years ago. —Bobby Carter

An insanely good psychedelic guitar tune made by a someone who grew up in a small central Niger village, built his guitars out of spare parts, and had no idea what rock music was. Prepare yourself for what occurs at the 4-minute and 36-second mark. —Bob Boilen

Down home and rowdy, this porch anthem from country's most innovative young star (with a strong assist from her pals in the Brothers Osborne) celebrates Southern values, East Nashville style: tolerance, open-mindedness and healthy living through judicious partying . —Ann Powers

When Odonis Odonis released its first full-length five years ago, the Toronto trio was as indebted to post-punk's Jesus Lizard as it was digital hardcore's Atari Teenage Riot. But with each successive album, the band has embraced darker industrial impulses. On its forthcoming Reaction EP, Odonis Odonis refines its grime and provides a restrained outlet for contemporary anxiety. You couldn't ask for a better soundtrack to the uploading of our minds to the cloud — which, as it turns out, is less Second Life and more panoptical solitary confinement. —Andrew Flanagan

It's pretty impossible to unspool the entire meaning of life in a single song, even if it's 10 minutes long. But that's exactly what Amanda Palmer does with this devastating opus on fear and human folly. —Robin Hilton

SASAMI, "Turned Out I Was Everyone"

The final track on SASAMI ends Sasami Ashworth's eponymous debut record on its most meditative note. "Thought I was the only one," Ashworth repeats over a drum loop and a bed of swaying synths, "Turned out I was everyone." Her voice is simultaneously certain and weightless as she recites a soothing reflection on the beauty of anonymity, or perhaps on the way loneliness binds us together, or on the delight of being proven wrong after all. —Marissa Lorusso

Don't let the trite diminutive of its title fool you: Sigrid's made a nuanced, flaw-free pop song with "Basic," distilling the pure delirium of Carly Rae Jepsen's best production into an amorous plea for fidelity that reaches the stratosphere. Just as you think we've arrived to the conclusion, Sigrid pulls a clever sleight of hand: She unplugs, letting her total devotion linger and resonate in the air, and not a moment too soon. —Joshua Bote

The uncompromising Inuit throat singer, composer and author pushes the human voice to surprising places. With an arresting blend of hyperventilating pulsations, soaring ribbons of vocalizing and dreamy synths, you can virtually feel the temperature drop. —Tom Huizenga

Under trembling strings, Iranian master vocalist Mahsa Vahdat sings the lines "My place is placelessness / My trace is tracelessness" in anxious ululations. The text might be ancient (13th century Persian poet Rumi), but it speaks loudly today, when issues of identity and homeland are never far away. —Tom Huizenga

Emily Wells, "Remind Me To Remember"

"Movies" is the densest and most deeply affecting cut from singer-songwriter Natalie Mering's upcoming album, Titanic Rising. (Stream it now as part of NPR's First Listen series.) It functions as both a sly argument for art's transportive, transformational powers, and as a tongue-in-cheek signal flare demanding rescue from the same. In the song's accompanying video, Mering appears suspended in white, transfixed by her own reflection, a not-subtle metaphor for everyone's voraciously vicarious experiences with film. —Andrew Flanagan

I love this breezy song, but once you realize it's filled with paranoia, "Paralysed" is downright scary. "It is not safe here / Please take me or they might," she sings. Nilüfer, we're worried about you. —Bob Boilen