Accessibility links
'It Surfaces With The Same Rawness': A Daughter Remembers Her Mother's Disappearance Carolyn DeFord, a member of the Puyallup tribe, was 26 when her mother suddenly vanished. At StoryCorps, she remembers what life has been like having never learned what happened. 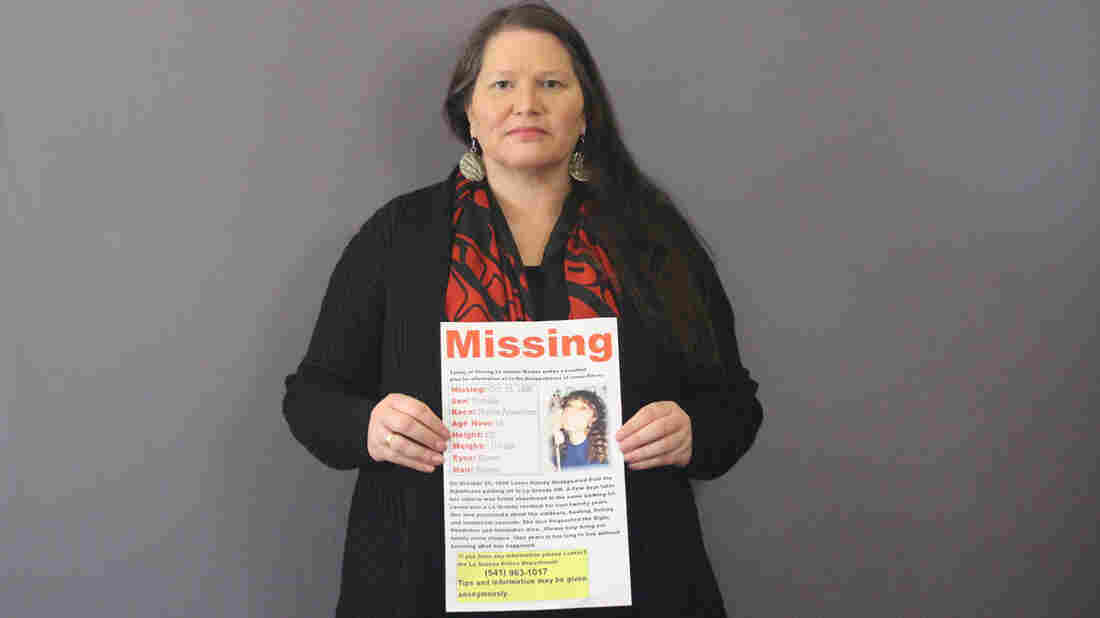 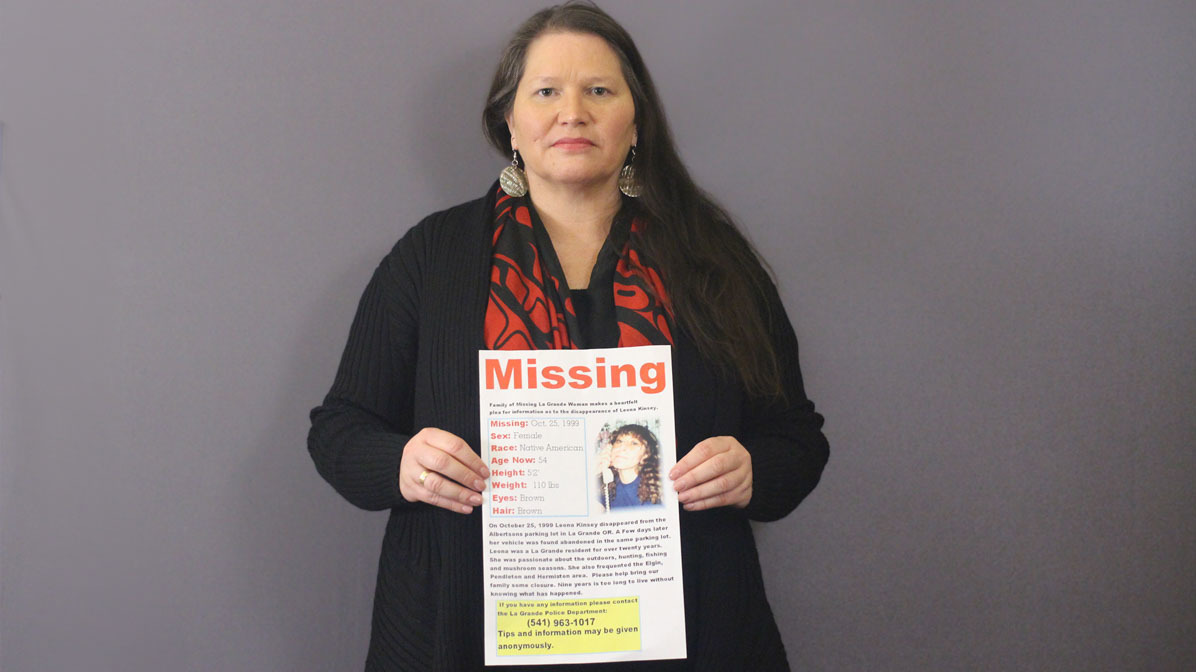 Carolyn DeFord poses with the missing persons poster for her mother, Leona Kinsey, who went missing in October 1999.

It's been 20 years since Carolyn DeFord, a member of the Puyallup tribe, last saw her mother, Leona Kinsey in La Grande, Ore.

DeFord was raised by Kinsey in a trailer park in La Grande. She remembers her mother as independent and self-sufficient, working odd jobs to scrape by.

But in 1999, at the age of 45, Kinsey went missing and was never seen again. With her disappearance, she joined the countless Native American women who have gone missing without a trace, their cases often never tracked by local police departments.

In a recent interview with StoryCorps, DeFord recounted the story of her mother's disappearance.

It all began when Kinsey failed to show up to a friend's house, and then for three straight days, didn't respond to her daughter's messages. Worried, DeFord filed a missing persons report.

Two days later, a friend found Kinsey's abandoned car in a grocery store parking lot. Fearing the worst, DeFord flew from her home in Washington to her mother's home in La Grande.

When DeFord arrived at her mom's house, her two dogs were locked outside; her cat was still inside.

"There was still coffee in the coffee pot. She had groceries. She had bread," DeFord says. "I went in her room and I laid down on her bed for a second and I could smell her in the pillows and I just cried."

'He Was My Everything': A Farmer's Wife Reflects On Her Husband's Suicide

Then she found her mom's purse, which had a pager with all the worried messages DeFord had left.

"I had this great hope that I would call and make the missing person's report and the police would just find her," she says. "That's what they do right? They find people."

Since the disappearance, DeFord raised a family and now works for the Puyallup Tribe in Washington as a senior administrative assistant. But even after 20 years, she says the grieving never ends.

"Sometimes it surfaces with the same rawness as if it was yesterday," she says. 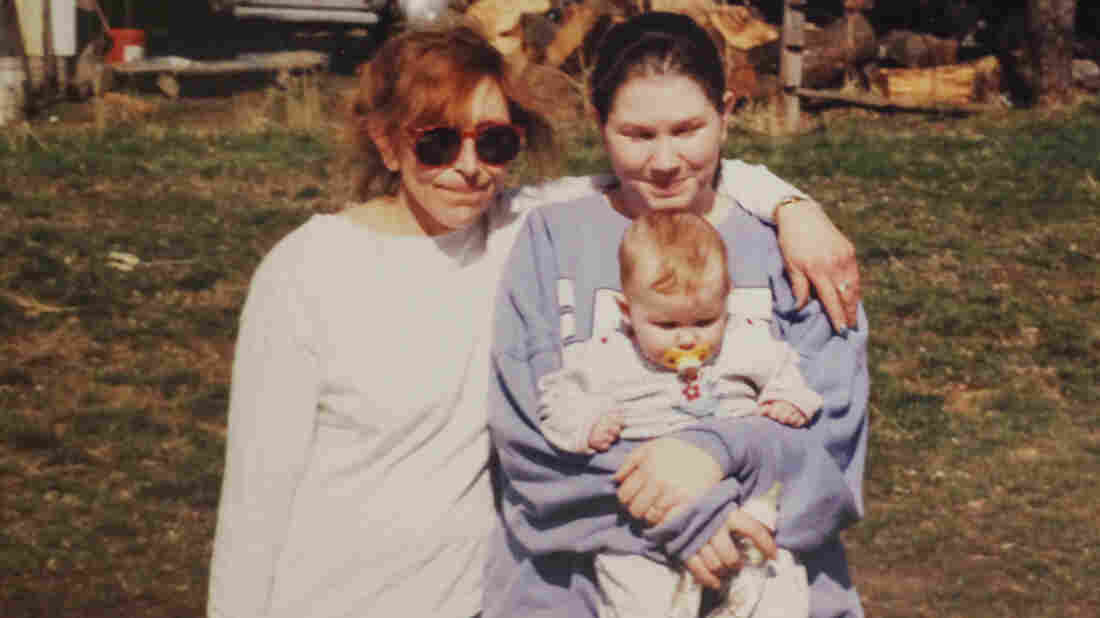 Carolyn DeFord poses with her mother and daughter in La Grande, Oregon in their last photograph together before Leona disappeared in 1999. Courtesy of Carolyn DeFord hide caption 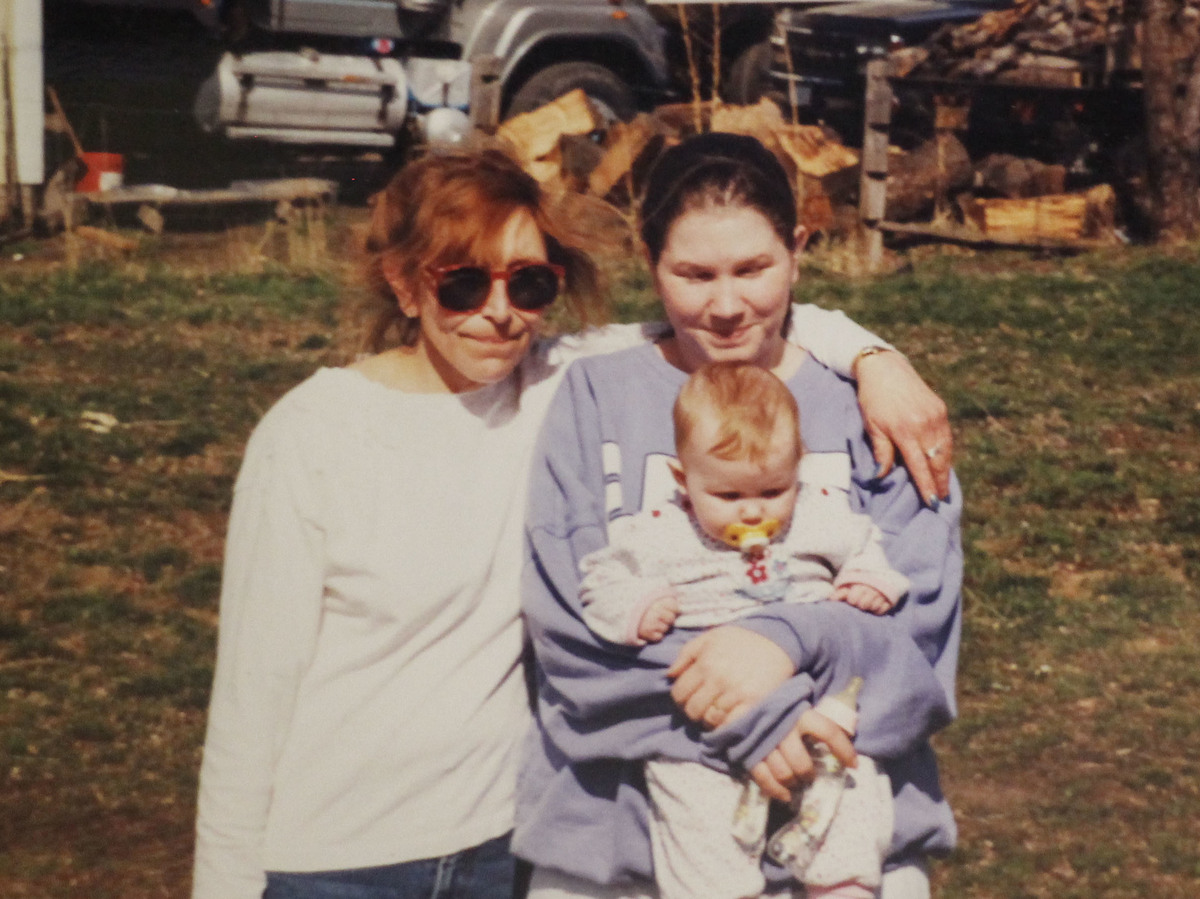 Carolyn DeFord poses with her mother and daughter in La Grande, Oregon in their last photograph together before Leona disappeared in 1999.

What makes things especially painful is the absence of closure, never knowing what happened.

"For the rest of the world, losing somebody, there's a grieving process ... when someone's missing, you don't get to go somewhere to honor them," DeFord says. She's never held a funeral or a ceremony for her mother.

Kinsey's case remains unsolved and DeFord says there won't be a ceremony or funeral until a resolution is found. She now works to help the families of other missing and murdered indigenous women.

"This year, I'm the age she was when she disappeared," DeFord says. "There's something about that."