Accessibility links
Georgia Lawmakers Pass Strict 'Heartbeat' Abortion Ban Georgia lawmakers approved a bill Friday that, if signed by Gov. Brian Kemp, will ban abortions once a heartbeat is detected in an embryo, which is typically about six weeks into a pregnancy. 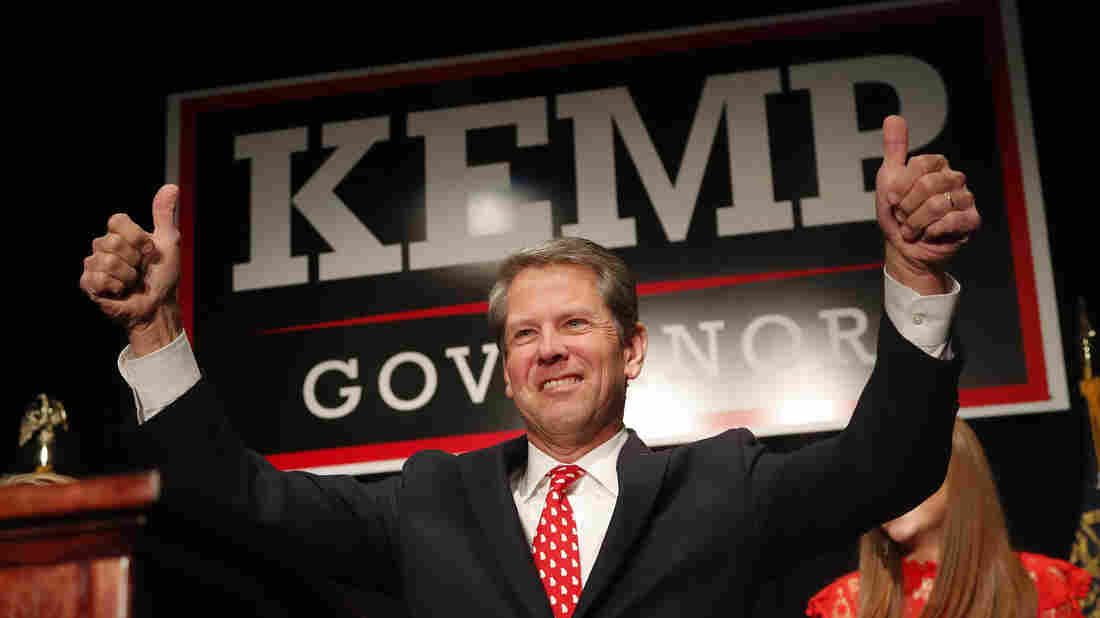 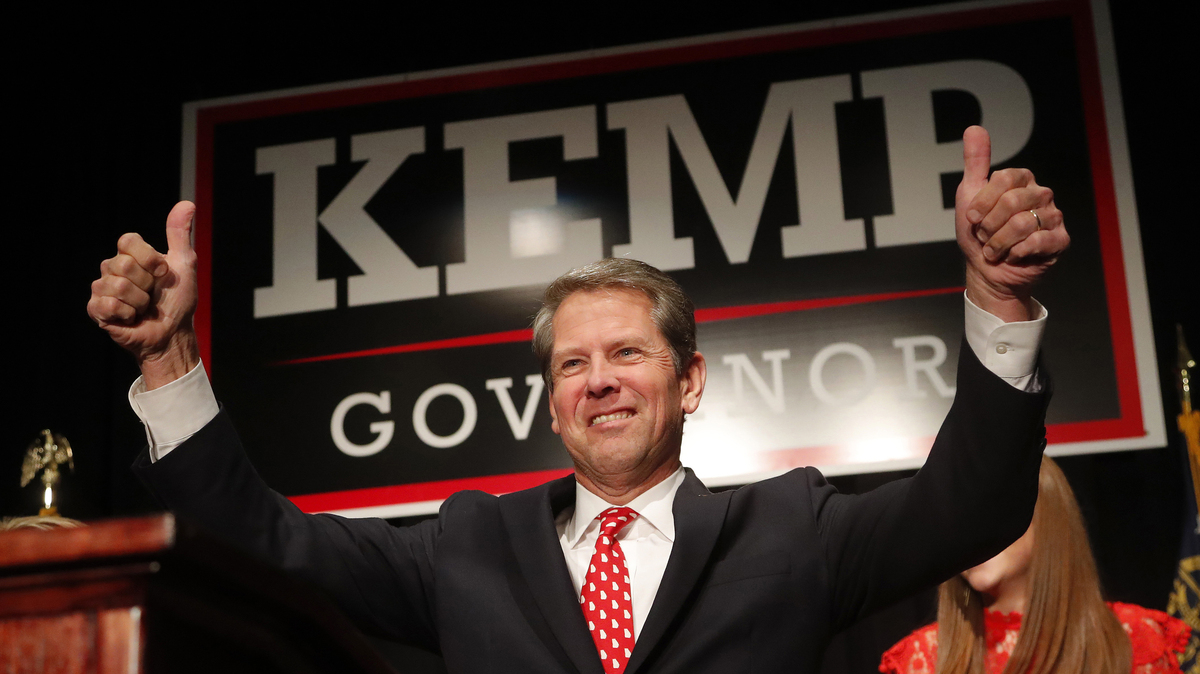 "We got over 40 phone calls from patients that were concerned about their upcoming appointments," said Hales, the director of A Preferred Women's Health Center, which operates four health clinics that perform abortions in Georgia and North Carolina.

Hales' clients were worried they might no longer be able to receive abortion services, after Georgia lawmakers approved a bill that would ban abortions once a heartbeat is detected in an embryo, which is typically about six weeks into a pregnancy. Currently, women in Georgia can seek an abortion during the first 20 weeks of pregnancy.

The measure passed in the Georgia House with 92 votes on Friday.

But the bill still needs one more person's stamp of approval before it becomes law — the state's governor, Brian Kemp.

The governor, who took office in January, promised to support anti-abortion legislation during his campaign. Kemp responded to the bill's passage in a post to Twitter, saying the action "reaffirms our priorities and who we are as a state."

Georgia values life. We stand up for the innocent and speak for those who cannot speak for themselves. The legislature’s bold action reaffirms our priorities and who we are as a state. I thank these lawmakers for their leadership and applaud their undeniable courage. #gapol

If Kemp signs the bill, called the "Living Infants Fairness and Equality (LIFE) Act," it will go into effect on the first of the year in 2020.

"It really does confuse a lot of patients and that's going to be a big a hurdle in the next weeks," Hales said.

Sean Young, the legal director of the American Civil Liberties Union of Georgia, said it isn't just a state issue; the bill could impact women from out-of-state, as well.

"Georgia has clinics that provide health care to women across the Southeast," Young told NPR. "This law will jeopardize the health of women in Georgia and the entire Southeast region."

The bill makes exceptions for abortions in cases that involve rape or incest, on the condition that a woman files a police report first. It also excludes situations in which a physician has determined that a pregnancy is "medically futile" or that a "medical emergency exists" that could "prevent the death ... or the substantial and irreversible physical impairment of a major bodily function of the pregnant woman."

Georgia is poised to join a growing list of states that have moved to pass strict abortion laws. Earlier this month, Republican governors in Mississippi and Kentucky signed similar laws that, like the proposal in Georgia, have been called "heartbeat" bills. Lawmakers in Tennessee, Florida, South Carolina and Ohio are pushing for similar bans, The Associated Press reported.

There has been significant pushback against the strict abortion laws. Kentucky's ban was temporarily blocked by a federal judge, and in January, a state judge found a similar law in Iowa unconstitutional.

If Georgia's bill is signed into law, the ACLU of Georgia said in a statement Friday that the organization will pursue legal action. Young, the organization's legal director, told NPR that under 50 years of Supreme Court precedent, the bill is unconstitutional. "We will see the governor in court," Young said.

Other groups have also opposed the bill, including the Medical Association of Georgia and the Georgia Academy of Family Physicians, which the AP reported sent letters to lawmakers arguing against the legislation.

Hollywood has also had its say; two letters — one from the Writers Guild of America and another spearheaded by actress Alyssa Milano and signed by 49 other actors — were issued in opposition to the bill.

Both letters warned lawmakers that if the bill is enacted, it could deter them from doing business in the state. The labor union said the law would make Georgia an "inhospitable place for those in the film and television industry to work."

To @BrianKempGA & Speaker Ralston:
Attached, is an open letter signed by 50 actors against #HB481. On behalf of the undersigned--as people often called to work in GA or those of us contractually bound to work in GA--we hope you'll reconsider signing this bill. #HBIsBadForBusiness pic.twitter.com/DsOmAWYU2x

Georgians who are against the bill have also made their voices heard. When the bill passed on Friday, a crowd gathered in the halls of the Capitol, chanting "shame," the AP reported. Women dressed as characters from The Handmaid's Tale, a dystopian story about women who are considered property of the state and forced to conceive children, have been protesting at the Georgia Capitol since the House first passed the measure earlier this month.

Abortion has long been a contentious topic in Georgia, but state Democratic State Sen. Jennifer Jordan said in her dissent to the bill that Georgia had reached an "uneasy truce" in recent years that "should have held."

"Our state currently has some of the most restrictive abortion laws in this country, yet abortion is safe and legal," Jordan said. "We didn't seek this fight."

But Georgia's "uneasy truce" hasn't been tenable for everyone.

"We would disagree that there should be a truce on protecting an innocent life in Georgia," Joshua Edmonds, the executive director of the Georgia Life Alliance, a group that opposes abortion. "There's no truce on protecting a human life, regardless the manner of conception, medical condition, gender or race."

Shortly before the bill came to a vote, Republican State Rep. Ed Setzler, who sponsored the bill, called it an effort to outlaw abortion "in the highest courts of the land," according to The Boston Globe.

Setzler, who defended the bill on the House floor on Friday, said it isn't part of a political agenda. "I think Georgians recognize the rightness of this," Setzler said. "There's certainly dissent. But this is not a political issue. We're not doing this political reasons. We're doing this because it's right."

If the bill is signed into law and then opposed in court, WABE's Emma Hurt reports lawmakers agree a case could end up in front of the U.S. Supreme Court.