Accessibility links
Interview: Miriam Toews, Author Of 'Women Talking' Miriam Toews' new novel is based on an awful true story: The drugging and rape of women in a Mennonite colony in Bolivia. Toews says she wanted to show the women as real humans, not isolated cultists. 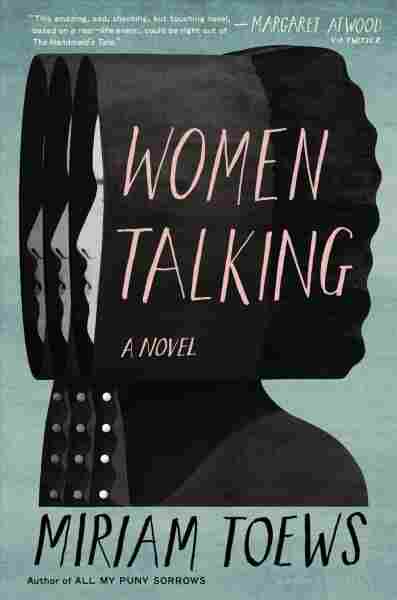 Miriam Toews' new book Women Talking is based on a ghastly true story — here's the opening sentence: "Between 2005 and 2009, in a remote Mennonite colony in Bolivia, many girls and women would wake in the morning feeling drowsy and in pain, having been attacked in the night."

Eventually it was revealed that men from the colony were drugging and raping the women. Toews takes that story and imagines what happened next, as the women gather in a hayloft and discuss how to respond. "There are eight women, two families, different generations, teenagers and then their mothers and their grandmothers, and all of the women have been attacked, have been raped, including the young children of the women there, and they have two days, 48 hours, to figure out what to do," she says. "The options they're considering are to stay and fight, to leave and to do nothing."

The concept of forgiveness is one that I believe in. To forgive somebody for having done something to you, it's a good feeling, but it's a religious concept, and it's there in order to keep the peace within these colonies. It's a tool, basically, another tool for the men who, the male leaders of these communities to wield and to say, look, you must forgive or you will not be forgiven, you will not enter heaven, and this is your Christian duty. And so this whole idea of forgiveness is really a type of justice, in a way: OK, they did this, they come back, you forgive them, we go on, we sweep this under the carpet and we continue, and nothing changes.

On including August, a male character who's taking the minutes of the women's meeting

To forgive somebody for having done something to you, it's a good feeling, but it's a religious concept, and it's there in order to keep the peace within these colonies.

First of all, just on a very pragmatic level, the women in these colonies aren't educated. Maybe they're able to write their name, maybe, but for the most part, they are illiterate. Given that the content of the book is the minutes of these meetings, it was necessary that there was someone who could read and write, write especially. But more importantly, it was kind of an inversion of roles, or role reversal, in that August is the secretary to the women, really, and the women are the philosophers, the women are the ones who are making an important decision. And in the end, of course, that document, the minutes are irrelevant to the women — they can't read them, they have far more important things to do. The implication is that the women will go on to write their own story.

On not describing the violence at the center of the story

It was important to me. I didn't want to reenact these crimes, the rapes. When I heard about what had happened in Manitoba Colony, in Bolivia, I was horrified like everybody else. But I also had all of these questions, questions that I've had all of my life, having been born and raised and grown up in a conservative Mennonite community. And I wanted these women to ask each other these questions and to have that conversation.

On comparing her Mennonite childhood to the colony in the book

It's similar in that the rules are very much the same. Certainly the misogyny within the culture, the culture of control, discipline, guilt, et cetera. But some of the details were very different. The community that I grew up in was a very conservative, is a very conservative Mennonite community. It was the first Mennonite settlement in Canada. But we, for instance, drove cars. We left the community from time to time, whereas in these closed colonies — for instance, the one at the heart of the book — the women, you know, really in my opinion are prisoners, in a sense. They don't speak the language of the country that they're in, they don't read and write, they don't leave the colony without being accompanied by a man.

It's easy to think of these people in these closed colonies, in these remote places, isolated, as sort of freaks, and cultists, in a way ... but the reality is too, of course, that they're human beings.

Even at the trial, the real trial of these rapists, the women weren't allowed to testify themselves. Men did it. And of course there's no recourse for them when these types things happen. And even if these crimes, even if these types of rapes aren't still happening — even though the rumor is that they are still happening — the number of incidents of male sexual violence ... are so high in these closed colonies and it doesn't take a lot to see why.

On depicting the women's inner lives

It's easy to think of these people in these closed colonies, in these remote places, isolated, as sort of freaks, and cultists, in a way ... but the reality is too, of course, that they're human beings, and I wanted to convey that. Because I feel that as long as we think of them as freaks and outsiders, we can then very easily say, well, you know, that's happening there, but it's so alien, maybe it's not really happening. And if you don't think it's really happening — at least not in the society you're familiar with — it's easy not to do anything about it, and not to even really think about it. ... Like human beings everywhere, they argue, they laugh, they joke, they contradict themselves, they nurture each other, care for each other. So I enjoyed making up the voices of the women in the loft, and hopefully — the hope is that someday we'll hear from these women directly.

This story was produced for radio by Samantha Balaban and Evie Stone, and adapted for the Web by Petra Mayer.