Accessibility links
Census Citizenship Question And What You Need To Know About The 2020 Census Who gets counted in the 2020 census? When does the count officially start? NPR answers questions about the national head count required by the U.S. Constitution once a decade. 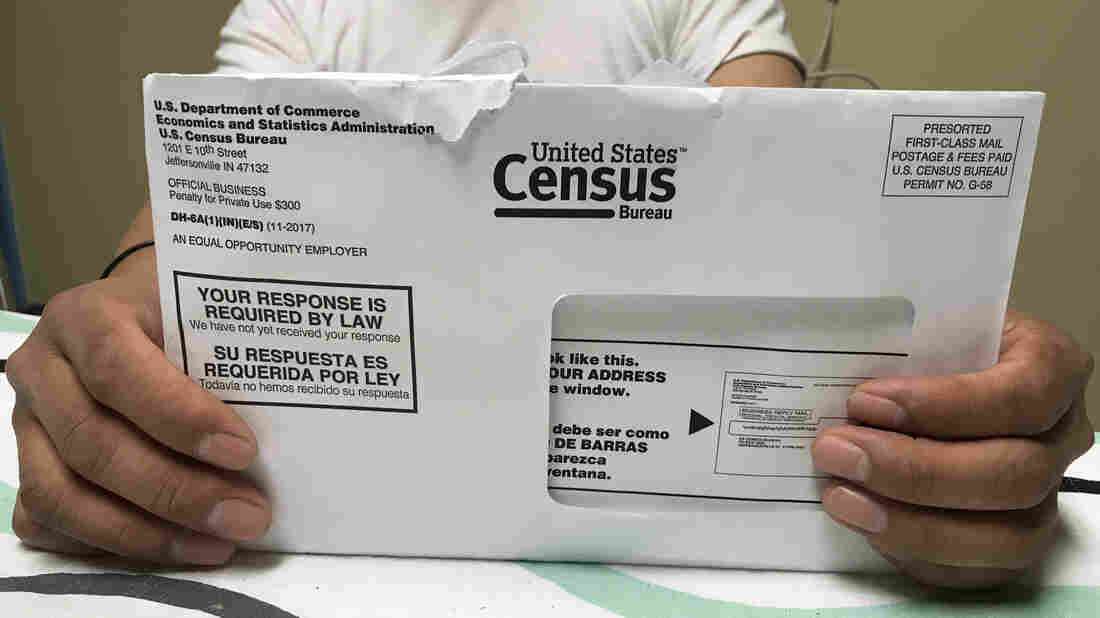 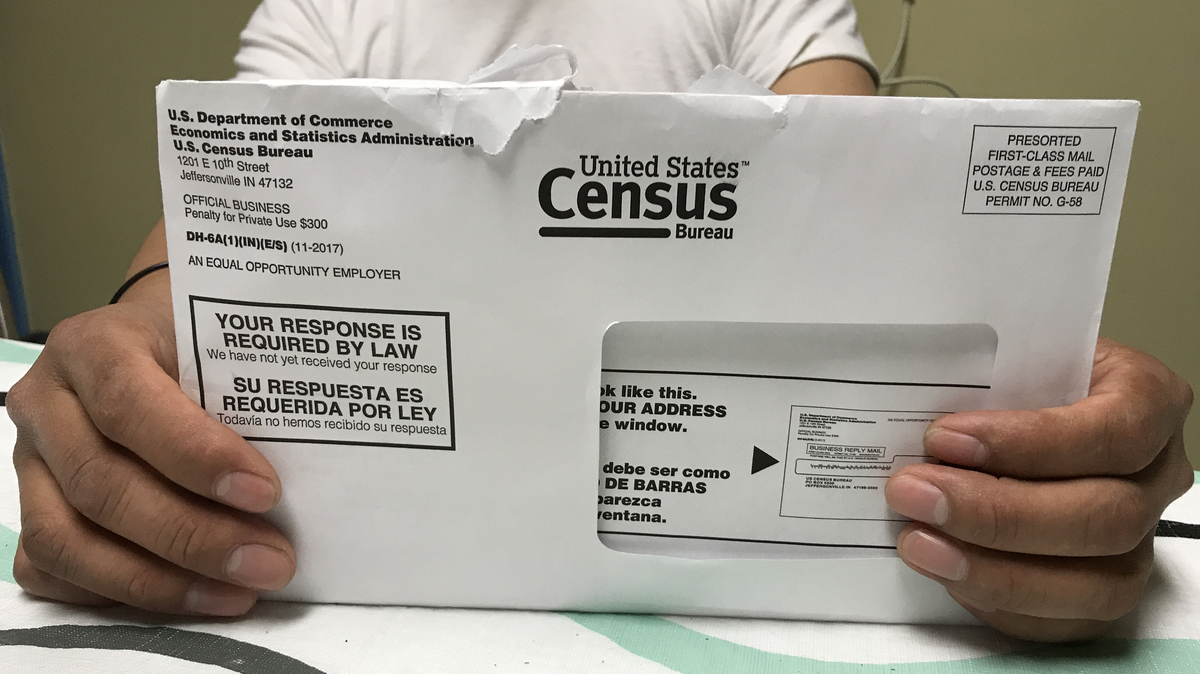 A Rhode Island resident holds an envelope he received for the 2020 census test run in Providence County.

The federal government is getting ready to ask some personal questions for the 2020 census. By next April 1, the Census Bureau plans to send a letter or a door knocker to every U.S. household. It's part of a once-a-decade tradition of counting every person living in the U.S.

Each national head count usually comes with a rash of confusion. The 2020 census will be the first in the U.S. since the rise of social media. The government has already begun preparing to combat disinformation campaigns that may try to disrupt the count, which is rolling out during what's expected to be a heated presidential race.

NPR has been tracking all of the developments to help you figure out what you need to know. Here are some of the most frequently asked questions about the census, answered.

Why is the census important?

The census is required by the Constitution, which has called for an "actual enumeration" once a decade since 1790. The 2020 population numbers will shape how political power and federal tax dollars are shared in the U.S over the next 10 years. The number of congressional seats and Electoral College votes each state gets are determined by census numbers. They also guide how an estimated $880 billion a year in federal funding is distributed for schools, roads and other public services in local communities. The demographic data are used by businesses to determine, for example, where to build new supermarkets and by emergency responders to locate injured people after natural disasters.

When does the 2020 census officially start?

The head count is set to officially begin on Jan. 21, in Toksook Bay, Alaska — more than two months before Census Day (April 1), which is a reference date. Most households can start participating around mid-March, when letters with instructions are scheduled to be sent to 95 percent of homes around the country.

How is the census taken?

The 2020 count will be the first one to allow all U.S. households to respond online. Paper forms will still be available, and, for the first time, you can call 1-800 numbers to give responses over the phone. Census workers will make home visits to remote areas — including rural Alaska, parts of northern Maine and some American Indian reservations — to gather census information in person. Households in the rest of the U.S. that do not respond themselves by early April may start receiving visits from door knockers trained to conduct census interviews and collect responses using smartphones.

Demonstration Of The 2020 Census Online Form

Watch a demonstration by U.S. Census Bureau staff of how to complete the 2020 census online form.

Who gets counted in the census?

The Census Bureau includes every person living in the U.S. — regardless of citizenship or immigration status. International visitors on vacation or work trips to the U.S. during the census are not included. Residents are counted at the address where they usually live and sleep. The Census Bureau has a detailed breakdown of how the 2020 census will count deployed troops, college students, incarcerated people, those displaced by natural disasters and other groups in unique living situations.

What questions will the 2020 census ask?

Most of the questions will be similar to what census forms have asked for in recent counts:

Notable changes for 2020 include new write-in areas under the race question for the non-Hispanic origins of those who identify as white and/or black ("German" and "Jamaican" are among the provided examples). There are also new household relationship categories that allow couples living together to identify their relationships as either "same-sex" or "opposite-sex."

In July, federal courts permanently blocked the Trump administration from adding to the 2020 census the question, "Is this person a citizen of the United States?" The Census Bureau, however, continues to include a citizenship question on other forms it asks some U.S. households to complete, including the American Community Survey; census forms for American Samoa, Guam, the Commonwealth of the Northern Mariana Islands, and the U.S. Virgin Islands; and the 2019 Census Test, which is collecting responses through Aug. 15.

Why was including a citizenship question on the census controversial?

The Trump administration has previously insisted it wants to add the question because the responses can be used to better enforce Voting Rights Act protections against discrimination of racial and language minorities. But a federal judge in New York has rejected that explanation as a "sham justification," and a judge in California wrote that including the question "threatens the very foundation of our democratic system."

A majority of the Supreme Court agreed with the lower courts and kept the question blocked from the census because they found that the administration's reasoning appeared "contrived."

Critics of the question point to Census Bureau research suggesting that asking about citizenship in the current political climate will discourage households with noncitizens from participating in the census. The dozens of states, cities and other groups suing the administration fear that could result in an undercount of Latinx people and other communities of color.

While the 2020 census won't include a citizenship question, the administration has directed the Census Bureau to compile government records on citizenship from the Social Security Administration, the Department of Homeland Security and other federal agencies. The bureau is preparing to release anonymized citizenship information based on those records in 2021. President Trump says the information could be used to redraw voting districts in a way that, a GOP strategist concluded, would be "advantageous to Republicans and Non-Hispanic Whites."

Can I refuse to answer a census question?

You can skip questions, submit an incomplete census form, and still be included in the head count. But you can be fined for refusing to answer a census question or intentionally giving a false answer, although the penalty has been enforced rarely in the past. Returning a partially filled-out questionnaire may result in a follow-up phone call or visit from a census worker.

Under current federal law, the bureau cannot share census responses identifying individuals with the public or other federal agencies, including immigration authorities and other law enforcement, until 72 years after the information is collected. The Census Bureau, however, can release anonymized census information about specific demographic groups at a level as detailed as a neighborhood.

Can I respond to the census in a language other than English?

While paper forms will only be available in English and Spanish, you can respond online or by phone in Spanish, Arabic, Chinese, French, Haitian Creole, Japanese, Korean, Polish, Portuguese, Russian, Tagalog and Vietnamese. The bureau is also providing video and printed guides in 59 non-English languages, as well as a video in American Sign Language.

Why is Hispanic or Latino not a racial category on the census?

A growing number of Latino census participants have been confused by this question format, resulting in "some other race" ranking as the third-largest racial group in census results from 2000 and 2010. The bureau has recommended combining the race and ethnicity questions into one, with "Hispanic, Latino, or Spanish" as an option for both race and ethnicity. But that would require the Trump administration to approve an Obama-era proposal to change the federal standards on race and ethnicity data. So far, OMB has not made public whether that proposal has been approved.

How do I apply for a census job?

Applications for the half-million temporary census positions, including door knockers and outreach specialists, must be submitted online. You can find more information on the bureau's recruitment website.

When will the 2020 census results be released?

The Census Bureau is expected to announce the new population counts by Dec. 31, 2020. That's the bureau's deadline for sending to the president numbers for the reapportionment of congressional seats, which goes into effect beginning with the 2022 elections. 2020 census data used for state and local redistricting are set to be released by March 31, 2021. The bureau is planning to release other new census data beginning in spring 2021.