Accessibility links
Fantasy Collides With African Culture In Blitz The Ambassador's 'Burial Of Kojo' The new Netflix movie, "The Burial of Kojo," is a fantasy film confronting illegal mining in Ghana. NPR's Michel Martin talks with the film's director about the project. 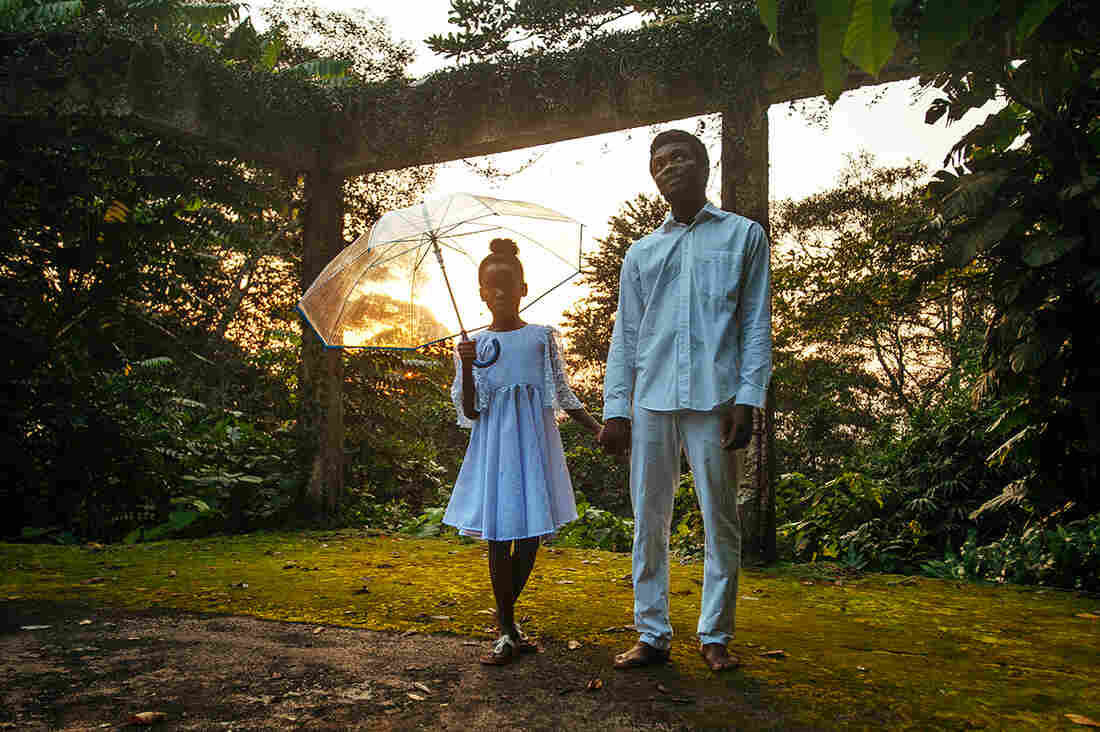 "The Burial Of Kojo" takes place in Ghana, using a cast and crew made up almost entirely of locals. Above, Cynthia Dakwa, who plays the role of "Esi," and Joseph Otsiman, who plays "Kojo." Ofoe Amegavie/Ofoe Amegavie hide caption 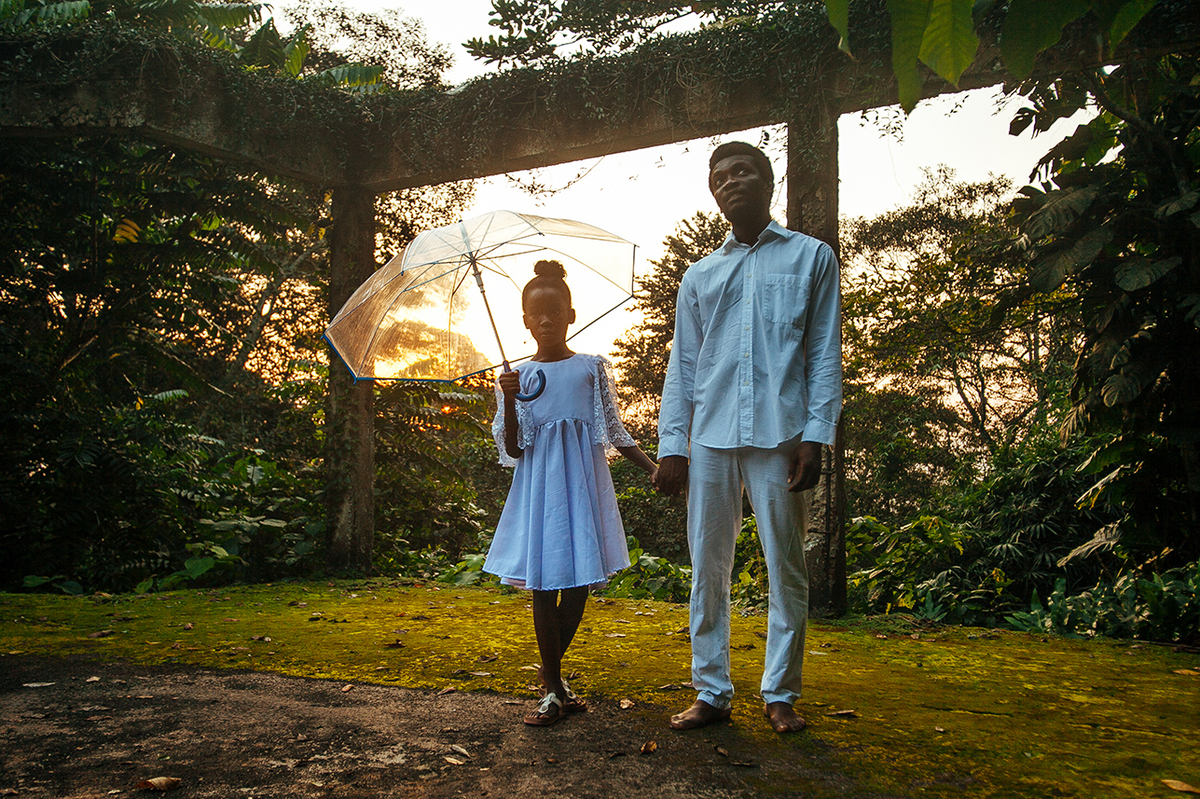 "The Burial Of Kojo" takes place in Ghana, using a cast and crew made up almost entirely of locals. Above, Cynthia Dakwa, who plays the role of "Esi," and Joseph Otsiman, who plays "Kojo."

On his 2014 album, Afropolitan Dreams, hip-hop artist Samuel Bazawule, also known as "Blitz the Ambassador," vividly describes his journey from wide-eyed immigrant to multinational success story. In one song he declares: "I think I'm relocating back to Ghana for good."

Taking leave from his home in Brooklyn and returning to the country of his birth was a fateful decision that Bazawule credits as the inspiration for his first feature film, The Burial of Kojo. The modern fable of a young girl navigating the spirit realm to find her father after his mysterious disappearance, the film takes place entirely in Ghana, using a cast and crew made up almost entirely of locals.

The Burial of Kojo caught the eye of producer and director Ava DuVernay , who acquired it earlier this year for distribution by her production company, ARRAY. On Sunday, the film makes its premieres on Netflix — the first original film from Ghana to be released on the streaming platform.

Bazawule spoke with NPR's Michel Martin about the project.

On making the transition from music to film.

I had made music for six years by the time I made Afropolitan Dreams, and I was slowly getting to the point where I realized that trying to communicate this Africanness through music just wasn't doing it. So I knew that I had to expand the palette. I've been a visual artist since I was a kid — I've made music, and I felt cinema was the logical next step. It allows us to combine all these things that we know, visual and sonic, and it puts people in the shoes of characters, so it makes sense as a medium.

You can't tell a story currently about Africa without shedding some light on the environment and how that's become exploited, whether it's through mining, lumbering or wherever the natural resource grab is. It's also seeing China make a play on the continent, and some really strong European corporations still running things. So for me, it was very important that that was present. But I never once wanted to make a story that centered [on] that.

On the film's depictions of family relationships

The film is about two brothers who have a jagged past, and one brother goes missing. We kind of suspect his brother is responsible for it, but his daughter then has to go on this magical journey to find him when nobody else can — the police can't, and his wife can't.

The pivotal scene [between father and daughter Kojo and Esi] is in Fante, which is a dialect of Twi. [Esi] says, "You know if you leave me, I will turn into the wind, disappear into thin air and find you." And the father responds, "You don't have to turn into air or go anywhere. I'll never leave you."

On filming with an all-Ghanaian cast and crew

Story is all about autonomy — who gets to control the story and who gets to tell the story. I felt that many African films haven't had the kind of autonomy that they should have. And you can tell by the choices that are made cinematically when it's clear somebody was in the room that just didn't really understand.
So going into this film, autonomy was the first thing. If we're going to make a film, then we should be adding to the canon of filmmaking, but specifically to the canon of African filmmaking. That required us to kind of put our heads together with other Africans to say, "What do you know? What do you remember?" And those memories are how I'm going to form the foundation of this film.

For me, my storytelling genesis begins with my grandmother's stories. You know, late-night nocturnal sitting around listening to fairy tales and folk tales and magical tales and stuff that only your mind could imagine. For me, making this film was central that I continued in that tradition.

On the film's vibrant color palette

It was about mirroring what I know. Africa is so rich visually, from fabrics in the marketplace to what the clay looks like, to what the earth looks like. It's so vivid.

And it's always struck me as odd when I watch movies from the continent that are often desaturated and almost sepia-toned. I'm always baffled because it's clear that whoever's coloring this has probably never been to the content, or definitely hasn't walked through the marketplace, because when you do, you realize that color comes at you.

On wanting a diverse, multinational audience for The Burial of Kojo

For me, it's the reason I've been making art from the beginning. I don't think it's right that a continent with over 1.2 billion people has such little visual representation, specifically in cinema.

So if we understand that cinema is a means of building empathy and for you to walk in shoes of people you've never met and to understand their circumstance, then you understand how important it is that our films don't just play locally, but they play globally. Because within that global discourse, that's how we form our ideas of each other. And if the films that are made from the continent aren't made by Africans or controlled by Africans, then the narrative is always one that doesn't really exemplify Africa.

This story was edited for broadcast by Tinbete Ermyas.