Accessibility links
This Is For 'The Undefeated': A New Picture Book Celebrates Black Brilliance Kadir Nelson was inspired by Kwame Alexander's poem. It "spoke to excellence, and perseverance, and triumph amidst adversity," Nelson says. "It was an ode to the sung and unsung heroes in history."

In The Undefeated, artist Kadir Nelson illustrates generations of black American heroes "emerging from the shadows."

"It begins with Jesse Owens literally jumping out of the darkness into the light ..." Nelson says. "By the time we get to toward the middle and end of the book those shadows have disappeared and the brilliance and excellence of the subjects have completely emerged into the bright light."

The text of the book is a poem Kwame Alexander wrote in 2008. Alexander's second daughter, Samayah had just been born, and Barack Obama had recently won election as the first African-American president of the United States. "This poem was my tribute to both," Alexander writes.

The poem inspired Nelson. "I thought it was very powerful ..." he says. "A beautiful poem that spoke to excellence, and perseverance, and triumph amidst adversity. It was an ode to the sung and unsung heroes in history."

I don't necessarily have to illustrate other people's works ... I'll take on a book or project written by someone else when the words really speak to me ... [when] I can add something to it that is unique to the work that I do. This is one of those texts that really spoke to me; it was beautifully written and I felt it was a really great pairing of words and pictures of an author and an artist.

I just really think about people in my family, people that I know, who are the unsung heroes. The people throughout history who we don't necessarily know — who we may never know — but all their contributions to the story of America are just as important.

On leaving one page blank for those who didn't survive

On the way he depicted the transatlantic slave trade

The subject matter is very difficult. It's not pretty. So even though I'm an artist and I try to create images that are visually pleasing, it was important that this subject be portrayed in the way that I think it should be. It's striking, it's unsettling, and it also gives you pause. This really happened.

On finding a visual style that feels true to his subjects

Whether it's a book, whether it's a stamp, or an album cover, my approach is always the same: I want to be able to connect with the subject matter. I have to step in the shoes of whoever I'm portraying and create artwork that is reverent toward toward the subject. 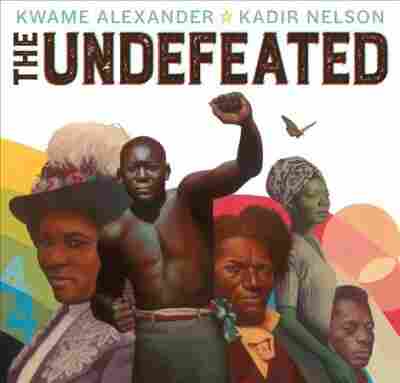 by Kwame Alexander and Kadir Nelson

On dedicating the book to his grandmother, and whether she's portrayed in it

We don't see her face, but at the same time, you know, I look at that family on the second spread ["the ones who survived America by any means necessary"] and I'm reminded of my grandmother. ...

My grandmother, she is from the Deep South and she married my grandfather who was a white American and they moved to the north and created a whole life for themselves. ... I come from a family of ancestors who were sharecroppers. ... I look at what she was able to do to push her family forward and create a life for the whole family ...

Justine Kenin and Emily Kopp produced and edited this interview for broadcast. Beth Novey adapted it for the Web.