Accessibility links
If Trump Closes Mexican Border, U.S. Economy Could See Big Disruptions President Trump has threatened to close the U.S. border with Mexico in response to a large number of illegal crossings. A closure would very likely hit a wide range of industries. 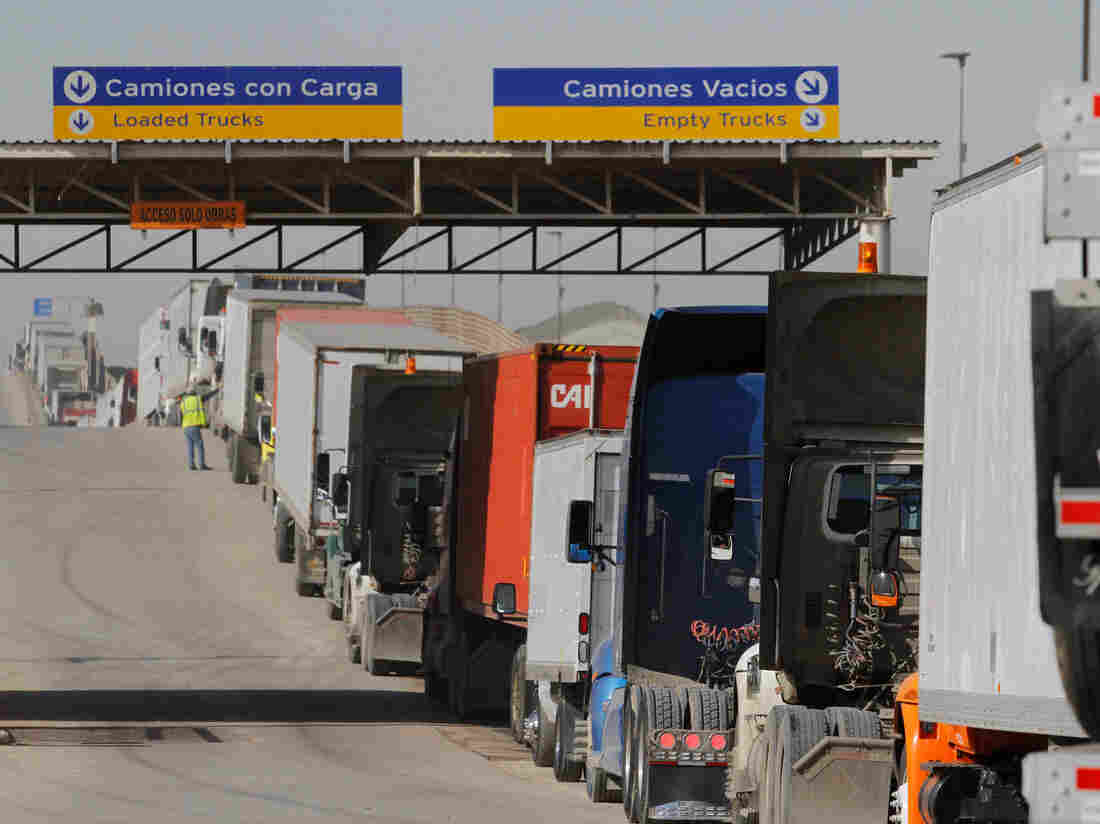 Trucks wait to enter the United States at the border crossing in Tijuana, Mexico, in 2017. More than $1.6 billion in goods flow across the border each day. Jorge Duenes/Reuters hide caption 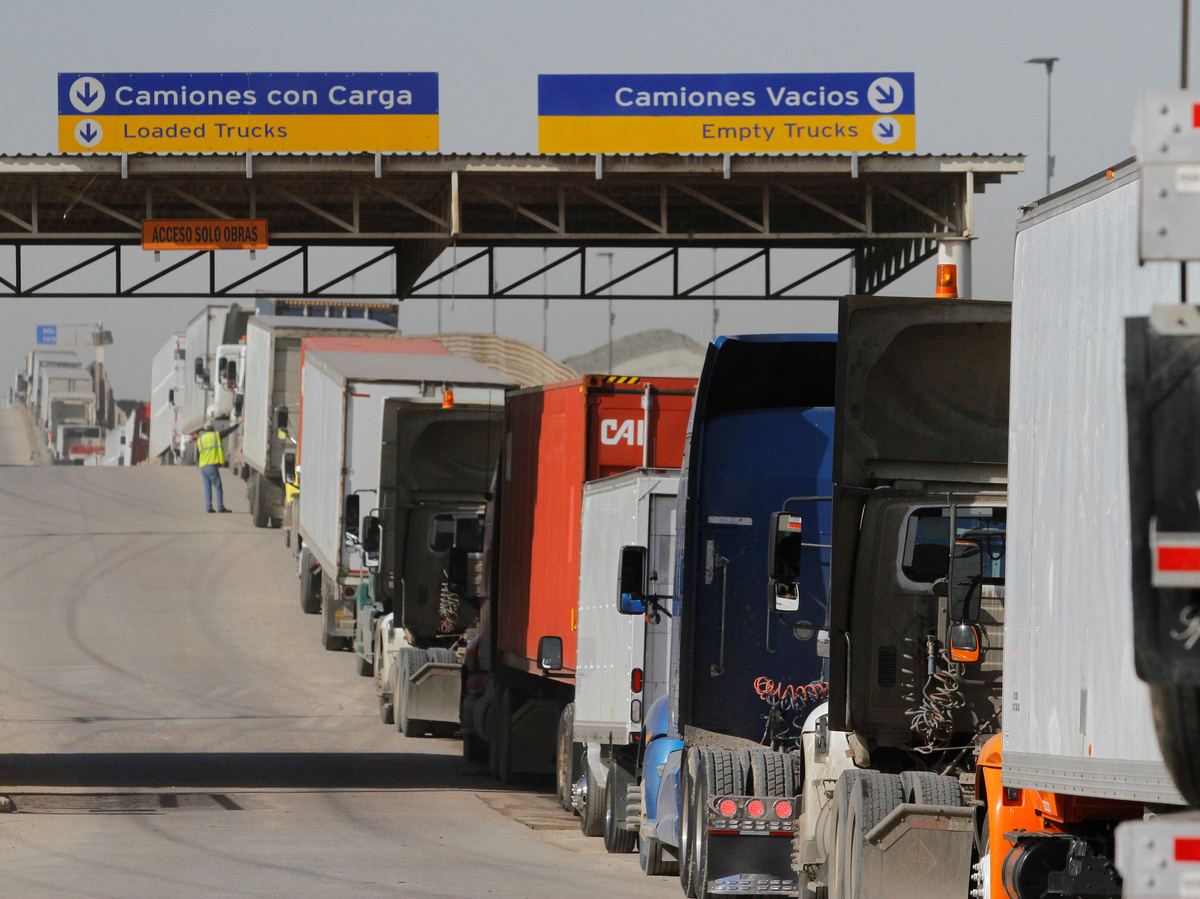 Trucks wait to enter the United States at the border crossing in Tijuana, Mexico, in 2017. More than $1.6 billion in goods flow across the border each day.

Frustrated by the large number of Central Americans who have been entering the country from Mexico, President Trump doubled down on his threat to close the Southern U.S. border.

"I'm ready to close it," Trump said Tuesday. "If we don't make a deal with Congress, the border is going to be closed, 100 percent."

This is not the first time Trump has sounded that warning. And so far he has not followed through.

Halting cross-border traffic with one of the nation's biggest trading partners could do serious damage to the U.S. economy, including industries located far from Mexico. But Trump appeared unmoved by that.

"Sure, it's going to have a negative impact on the economy," the president conceded. "But security is what is most important to me."

Retailers in San Diego got a small taste of what a border closing would look like last November, when members of a migrant caravan rushed the international boundary and U.S. officials closed one border crossing in response. While that shutdown lasted only a few hours, it came on what should have been one of the busiest shopping days of the year. And the fallout was severe, costing local merchants an estimated $5.3 million in lost sales.

"I easily, easily lost between $3,500 to $4,500 just that day," said Louie Saloumi, who runs a churro stand in an outlet mall just north of the border that caters to Mexican shoppers.

Saloumi said if the border were closed for a full week, he'd be out of business. "That mall would be a ghost town," he said.

Closing the entire U.S. border with Mexico would also put the brakes on more than $1.6 billion worth of goods that cross back and forth every day, including 50 million pounds of fresh Mexican produce that now fills 100 warehouses in Nogales, Ariz.

One importer warned that the U.S. would run out of avocados in three weeks, but guacamole is the least of it. Fresh tomatoes, peppers, melons and eggplant for the whole country would soon be in short supply.

"Probably over half of what most consumers put in their shopping bag when it comes to fresh produce, they would find reduced quantities and higher prices," said Lance Jungmeyer, president of the Fresh Produce Association of the Americas.

The Trump administration has already announced plans to halt truck traffic through Nogales on Sundays, as customs officers who typically staff the border crossing there are reassigned to deal with the influx of Central American migrants. If that shutdown extends to other days of the week, Jungmeyer worries some people will be out of work.

"There's jobs that depend on moving goods back and forth every day. And if that's not moving, those people are laid off," Jungmeyer said. "That means those people are not able to keep the lights on in their own homes and to put groceries in their own refrigerators. So it gets really dicey, really quick."

The effects aren't limited to the border region. Mexico is a critical supplier for companies throughout the U.S., including the highly integrated auto industry.

"We don't just trade with each other. We're making things together," said Kristin Dziczek, vice president of the Center for Automotive Research in Michigan. "Mexico is a source of 37 percent of all imported auto parts to the U.S. Every vehicle has Mexican parts in it."

U.S. assembly plants are especially dependent on Mexico for critical parts such as wiring harnesses. Without them, those plants would soon grind to a halt. And that in turn would idle domestic parts-makers.

"We'll see auto production in the U.S. shut down pretty quickly. Some within hours and certainly the whole industry within days," Dziczek said.

The fallout from a complete border shutdown would be so fast and so sweeping it's hard to take the president's threat seriously, Dziczek said. But White House aides insist it's a real possibility.

Companies throughout the U.S. routinely make contingency plans for supply disruptions, but it's impossible to prepare for something like a complete border shutdown. If the worst does happen, Dziczek joked that she does have one consolation: a stockpile of tequila that can last a while.