Accessibility links
Waco Biker Shootout: All Charges Dropped In 2015 Melee That Killed 9 The McLennan County district attorney said he aims to "end this nightmare that we have been dealing with in this county." Prosecutors were not able to win any convictions after indicting 155 bikers. 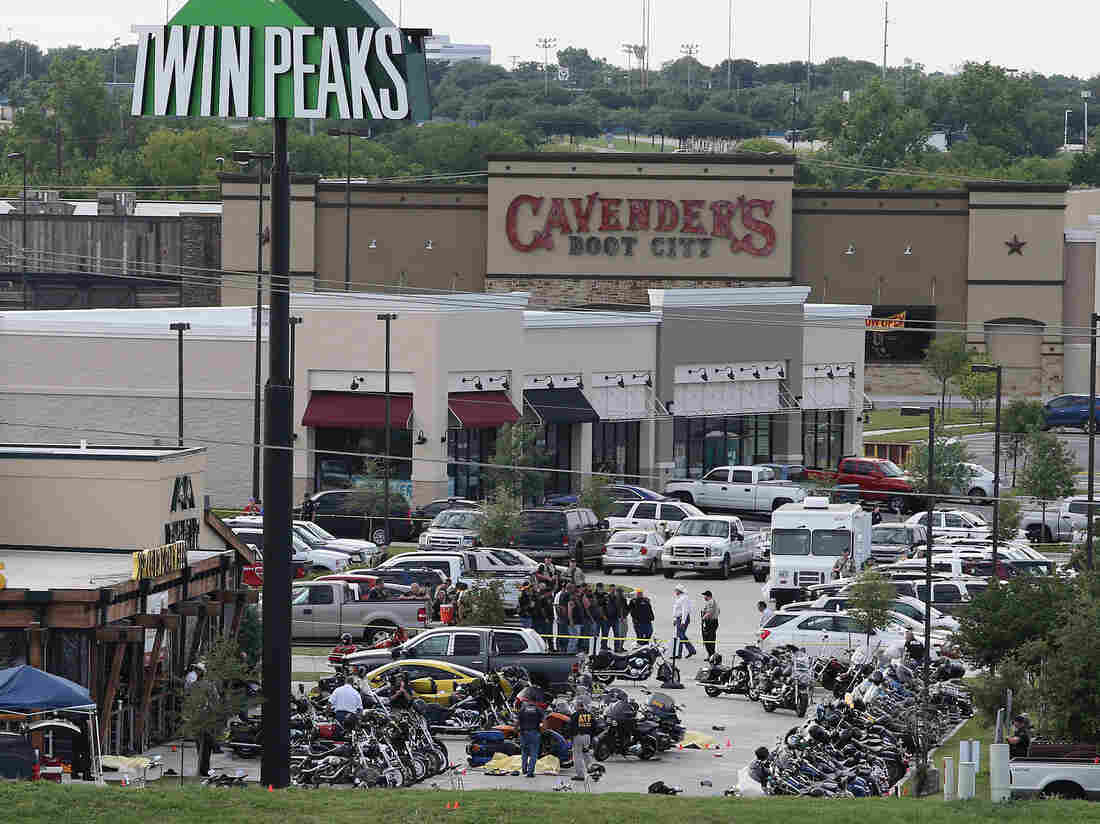 Prosecutors in McLennan County, Texas, said that all remaining charges related to the deadly melee between rival motorcycle gangs outside a Waco restaurant in May 2015 would be dropped. The aftermath of the shooting is seen here. Jerry Larson/AP hide caption 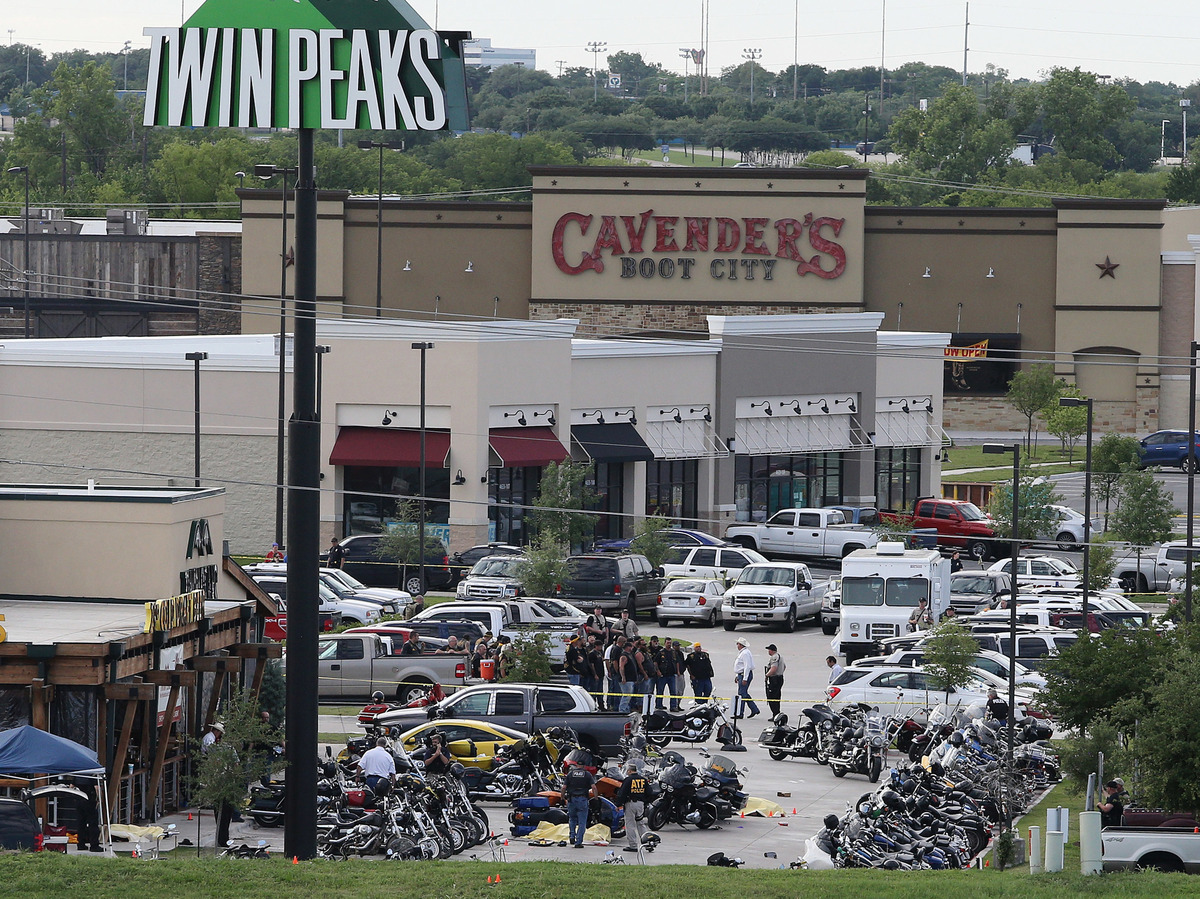 Prosecutors in McLennan County, Texas, said that all remaining charges related to the deadly melee between rival motorcycle gangs outside a Waco restaurant in May 2015 would be dropped. The aftermath of the shooting is seen here.

In a 2015 shootout in the parking lot of a Waco, Texas, restaurant, nine people were killed and 20 were injured. After the gunfight, police arrested 177 bikers, and a grand jury indicted 155 of them on charges of organized crime.

But no single one will be held to account for the violence, McLennan County Criminal District Attorney Barry Johnson announced Tuesday, pointing the finger at his predecessor, who he said failed to determine the charges in which "the admissible evidence would support a verdict of guilt beyond a reasonable doubt."

A 'War' On Wheels: The Biker Shootout At Waco, And What Came Next

He told the Waco Tribune-Herald that he was dropping the charges to "end this nightmare that we have been dealing with in this county since May 17, 2015."

"The loss of life is a difficult thing," Johnson told the newspaper. "But after looking over the 24 cases we were left with, it is my opinion as your district attorney that we are not able to prosecute any of those cases and reach our burden of proof beyond a reasonable doubt."

All but 24 of the indictments were dropped before Johnson took office on Jan. 1. The remaining 24 defendants were reindicted on charges of riot. But the statute of limitations had already expired on many of the cases by then. Johnson said he was concerned that any convictions would be overturned on appeal because the charges might not hold up.

The previous district attorney, Abel Reyna, told the Tribune-Herald that he took issue with Johnson's assessment.

"I absolutely disagree with the overall result, as well as several statements and accusations within Mr. Johnson's press release," he said. "However, it is solely his decision on how to proceed with any case in the district attorney's office. I respect the fact that the voters of McLennan County chose Mr. Johnson to make these types of decisions."

Prosecutors struggled to prove who was at fault in the melee because it was "a battlefield situation," Tom Needham, McLennan County's executive assistant criminal district attorney, told the Austin American-Statesman. "There were dozens of guns and hundreds of weapons collected after a five-minute brawl. ... With the video evidence and the forensic evidence that's available, it's simply not possible to establish proof beyond a reasonable doubt [of] who fired the shots that killed people."

Four of those killed were struck by bullets from Waco police officers, according to multiple media reports.

As NPR's John Burnett reported at the time, Waco police knew that trouble was brewing at the Twin Peaks restaurant between rival motorcycle gangs, including the Cossacks and the Bandidos:

"Bikers had been congregating there in ever-increasing numbers, and there had been more and more arrests for fights and weapons. Authorities had intelligence that there was a high potential for violence on Sunday. And they were right.

"About 12:15 p.m. local time, a fight reportedly started in the bathroom, then moved into the bar and finally spilled into the parking lot, where the motorcycle riders went at each other with guns, knives, chains and clubs."

Only one of the cases was ever tried by prosecutors: that of Jacob Carrizal, head of the Bandidos' Dallas chapter. But his case ended in mistrial, indicating the difficulty that prosecutors were likely to face in any subsequent trial of a biker rounded up at Twin Peaks.

A judge put all the remaining cases on hold once Johnson was elected so that he could review their handling. In his statement, Johnson said he didn't want to waste taxpayers' money on fruitless trials. As of May 2018, the county reportedly had spent $1.2 million on expenses related to the shootout.

More than 130 bikers have filed civil rights lawsuits against city and county authorities, the Tribune-Herald reports; many of them allege false arrest. Many of the 177 arrested spent weeks in jail on $1 million bonds.