Accessibility links
President Trump To Border: Calexico, Calif. Residents Worry About Rising Tension A 2-mile section of border fence was replaced last year with a 30-foot steel pole wall. Residents on both sides of the border are concerned about rising tensions around cross-border traffic. 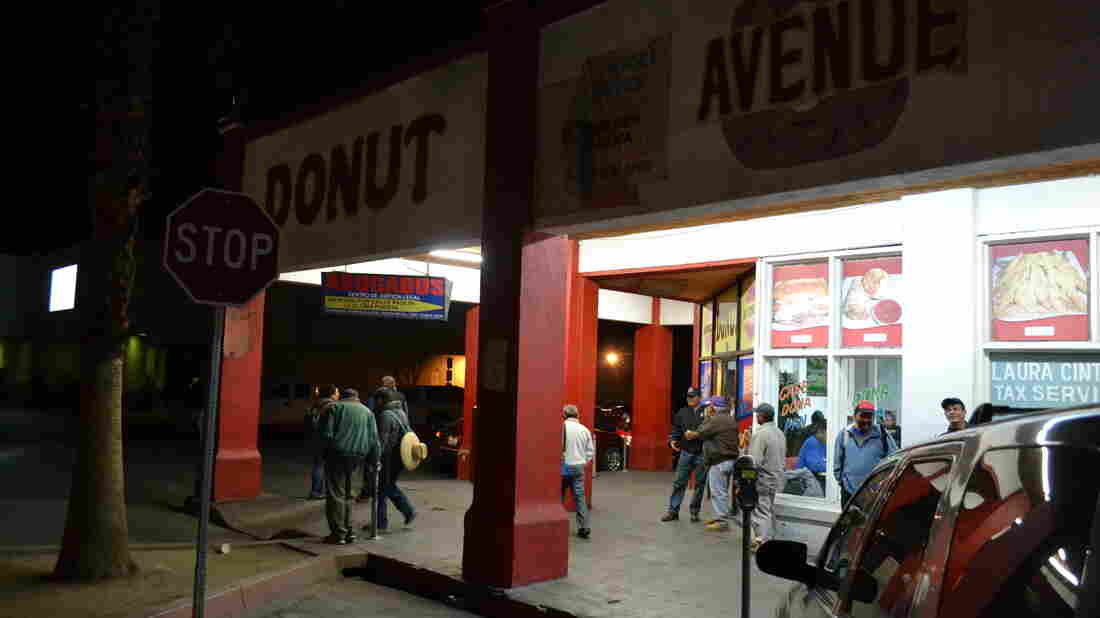 Mexican agricultural workers wait at a Calexico doughnut shop before dawn to be driven to farms in the Imperial Valley after crossing the border. President Trump is scheduled to visit Calexico, Calif., on Friday. Max Rivlin-Nadler for NPR hide caption 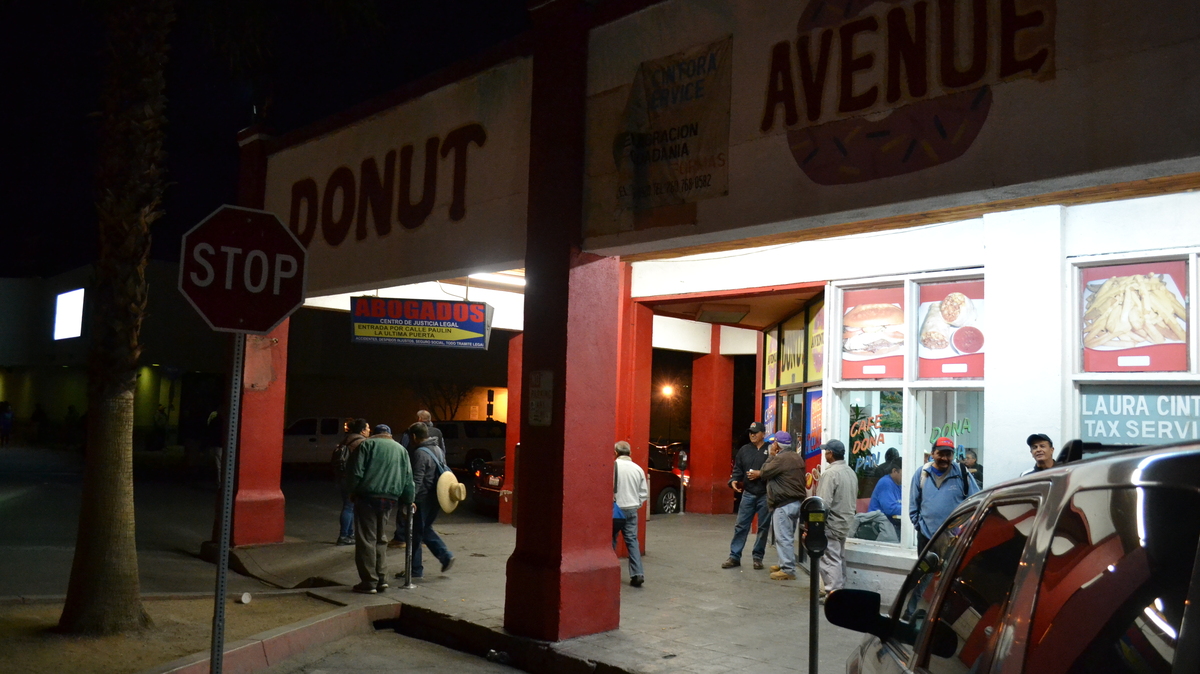 Mexican agricultural workers wait at a Calexico doughnut shop before dawn to be driven to farms in the Imperial Valley after crossing the border. President Trump is scheduled to visit Calexico, Calif., on Friday.

President Trump is scheduled to visit Calexico, Calif., on Friday to commemorate the completion of what the White House has touted as the first segment of the president's border wall.

The visit comes a week after the president threatened to shut down the border as a result of a surge of migrant families crossing in search of asylum. He has since walked back that threat, but uncertainty and nervousness remain in border towns like Calexico that rely on cross-border trade and traffic.

A little before 4 on a recent morning, 25-year-old Alexandra Elizabeth Godoy had already been up for three hours. She is one of the hundreds of Mexican citizens who cross the border from Mexicali, Mexico, to Calexico every morning. She picks lettuce at a farm in the Imperial Valley to support her three children, and she was waiting in downtown Calexico for a bus to take her to work.

She says she hasn't been following the news, but her friends have been telling her about President Trump's on-again, off-again threats to close the southwest border.

In a doughnut and coffee shop filled with farmworkers from across the border, 45-year-old Enrique Javier, who has been working in the Imperial Valley for 30 years, says a border closure would be hard not only for farmworkers, but for the entire city.

"The marketplace would be affected, the taxi companies, the buses, everything would be impacted that works with Mexicans," Javier says in Spanish.

Families that straddle the border would also have to make tough decisions. Edgar Godinez, 21, who lives in Heber, Calif., has a 1-year-old son in Mexicali.

"I wouldn't be able to see my son if they do that. I might have to stay in Mexico to stay with my son," he says.

Before sunrise, buses take the agricultural workers to fields throughout the Imperial Valley.

Jack Vessey is a fourth-generation farmer in Holtville, Calif., about 15 miles north of the border. More than half of his workers cross from Mexico. He says that the threats and the tension along the border are just not good for business — especially in the midst of the cabbage harvest.

"It's a region. It's not this fence or this line or this border. It's been there. It's been here for a long, long time. And to see the people passing back and forth — be it families, be it dollars, be it pesos — you know, we live together," Vessey says at his family's farm office.

Vessey acknowledges the need for immigration reform, but he doesn't think a shutdown or even a short-term interruption at the border would be the right way to go about it.

"I don't know what we'd do," Vessey says. "It would be very difficult to do what we do on a daily basis." 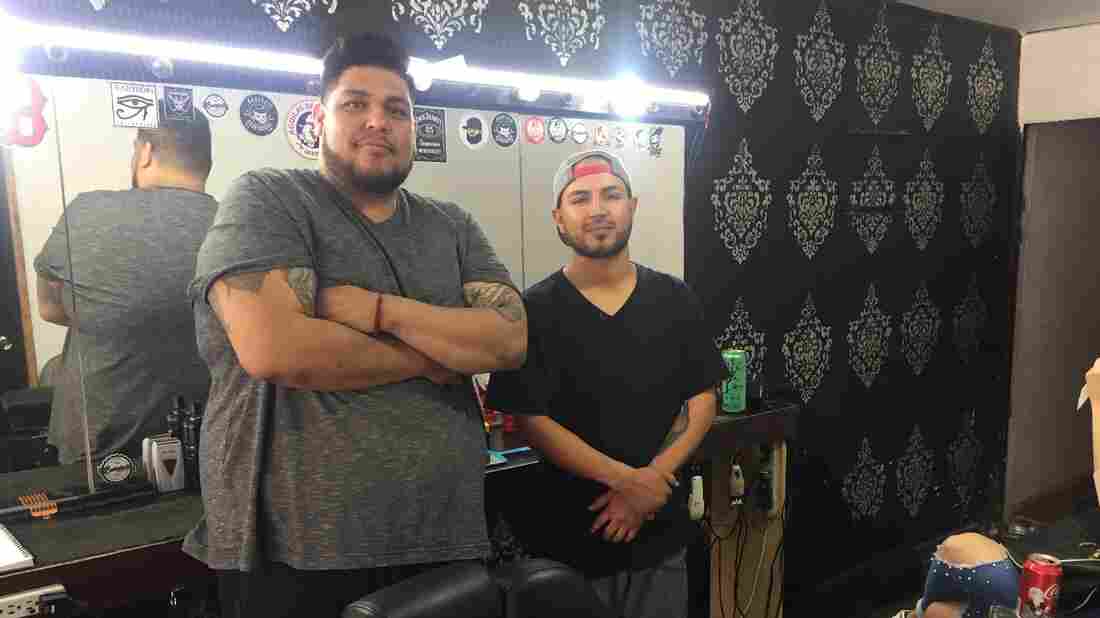 Hernan Gomez (right) and his business partner Chris Lopez (left) in their Mexicali barbershop. They are concerned that a border slowdown could be bad for business. Max Rivlin-Nadler for NPR hide caption 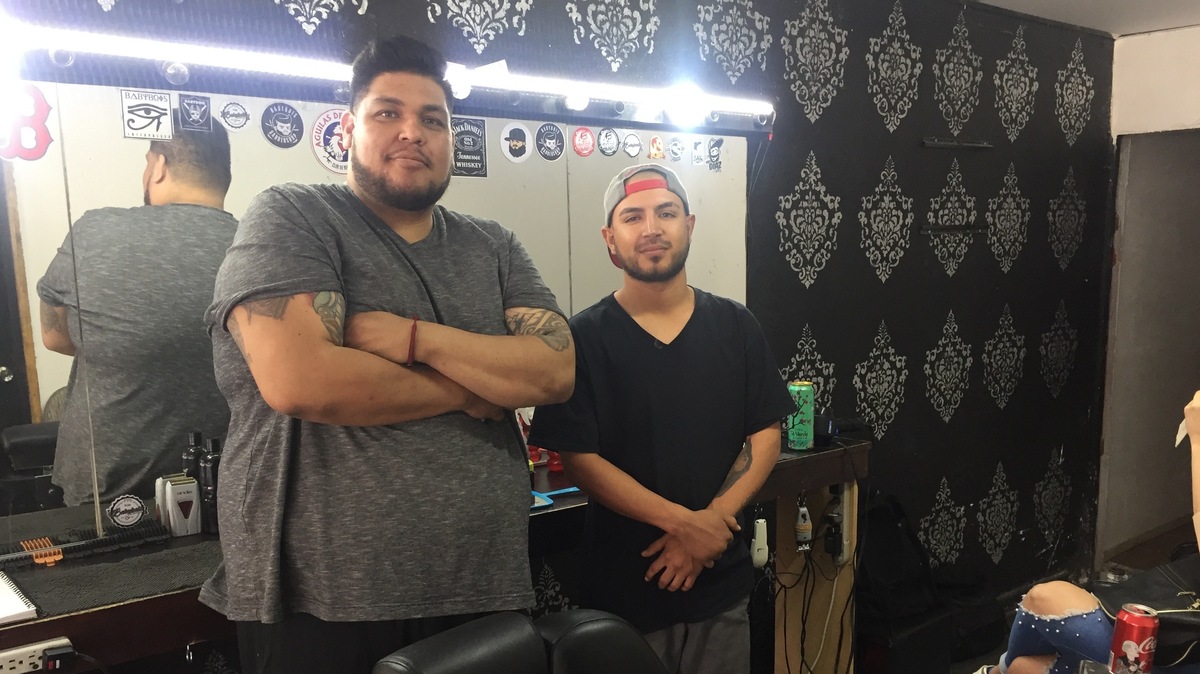 Hernan Gomez (right) and his business partner Chris Lopez (left) in their Mexicali barbershop. They are concerned that a border slowdown could be bad for business.

South of the border, in Mexicali, lots of businesses rely on cross-border traffic coming over from the U.S. In La Chinesca — a Chinese neighborhood in Mexicali — 25-year-old Hernan Gomez runs the BabyBois Barber Shop with a group of friends. The neighborhood was founded by Chinese railroad workers who had been deported from the U.S. because of the Chinese Exclusion Act, and it has been shaped throughout the decades by U.S. and Mexican policies toward immigrants.

Gomez's shop is currently undergoing construction, and he feels as if the border shutdown scare could not have come at a worse time for his regular clients, who he'll be relying on to keep him in business through the remodeling.

"If it were to close down, they would be affected. It's a barbershop, man. Man likes to stay fresh." Gomez said. "Man, we'd lose customers like that. Sometimes when the wait [at the border] is too long, we lose customers."

Some border crossings — like those in El Paso — have experienced wait times of up to seven hours to get into the U.S., because Customs and Border Protection staff have been pulled away to deal with huge numbers of asylum-seeking families arriving on the southwest border.

Calexico has not had as many asylum-seekers presenting at its port of entry as nearby San Diego, but delays at the border might occur as security ramps up for Trump's visit.

The renovated fence is now slatted — the previous one wasn't — and allows border patrol agents to see through it into Mexico. But the barrier itself isn't new to Calexico.

"At least 45 years there's been a fence there. Now they've obviously replaced the fence. It's now higher and so now you can see through it, but the fence has been there for many, many years," says Calexico City Manager David Dale.

Dale insists, though, that what we call that barrier is important.

"That's our sister city in Mexicali, so they're like our brothers and sisters there. And so we say it's not a wall, it's a fence," he says.

Calexico is already planning for protesters — including some who will launch a large, inflatable Trump balloon to greet the president's visit.