Accessibility links
Rohingya Settle In For The Long Haul, Even As Bangladesh Wants Refugees To Go Home Bangladesh wants a million Rohingya refugees to go back to Myanmar. But 18 months after most of them fled violence, they are too afraid to go back and are making new lives for themselves in camps. 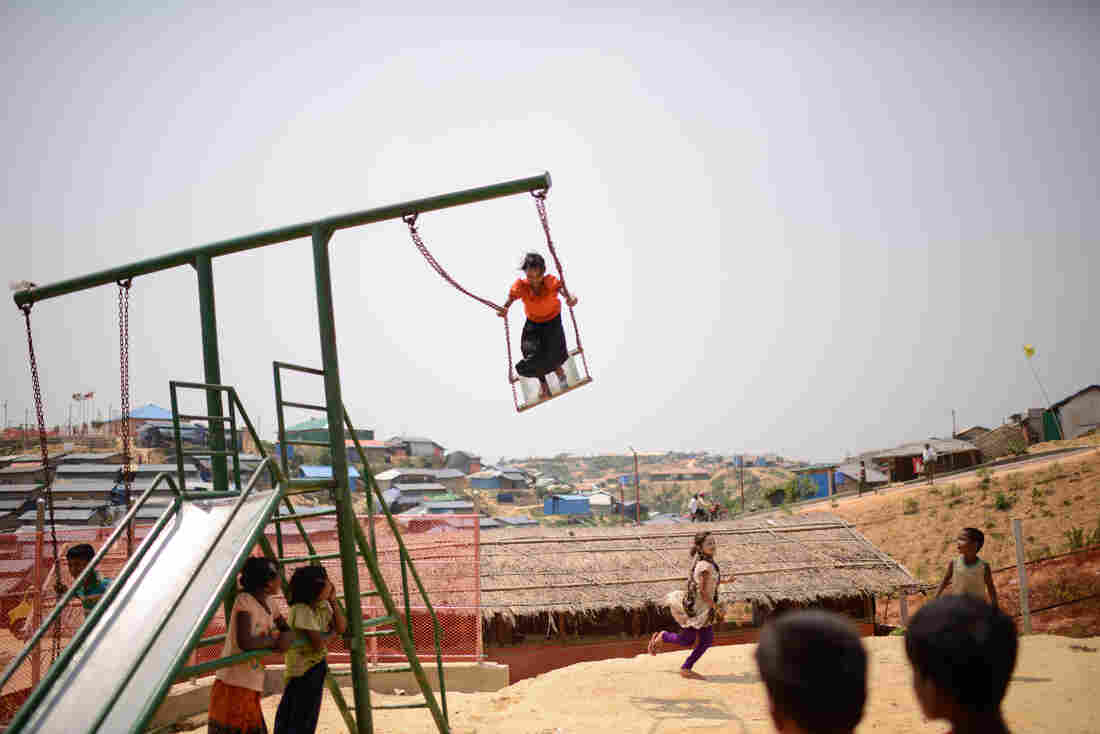 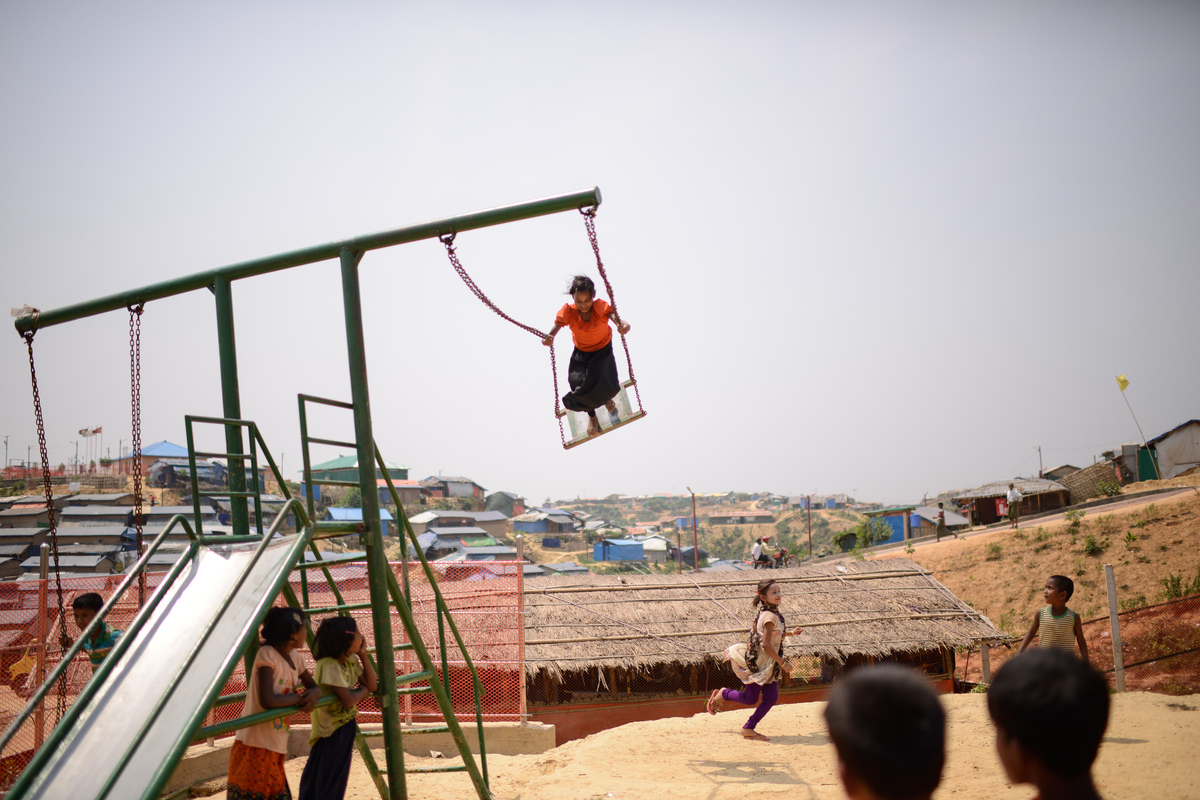 Children play at a Rohingya refugee camp outside Cox's Bazar in Bangladesh.

Along the edge of the largest camp sheltering Rohingya refugees in Bangladesh, hundreds of men and women with shovels and wicker baskets are turning a barren hill into a parking lot-sized plateau. The newly leveled land will eventually hold new stronger shelters for refugees from overcrowded parts of the camps.

Under the direction of engineers from the World Food Program, the day laborers are building retaining walls, terracing slopes and digging massive drainage ditches. 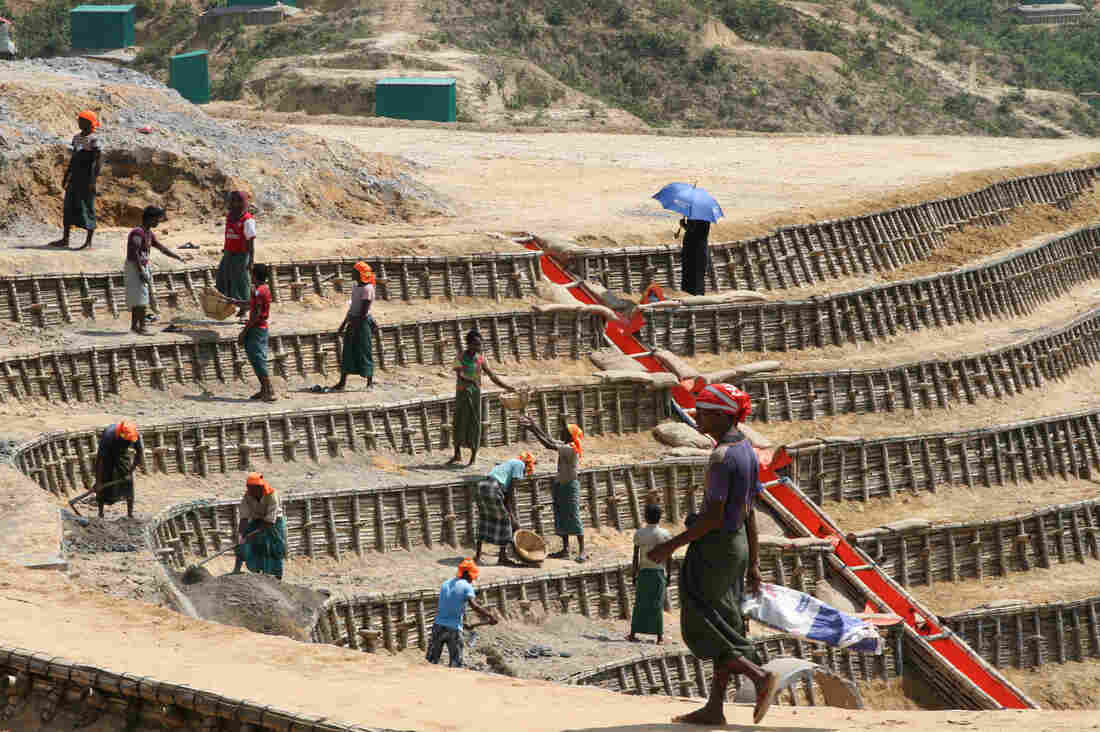 "We are here creating safe land for living," declares Mosa Alshalabi, a WFP engineer. "Because that soil," he says pointing at some sandy cliffs in front of him, "that soil is not safe at all. All these houses when it rains, the soil [beneath them] will be washed away."

The Bangladeshi government continues to insist that the nearly 1 million Rohingya refugees crammed into camps like this one outside Cox's Bazar are just temporary visitors. It wants them to go home. But a year and a half after most of the refugees arrived, there are few signs that they will leave anytime soon. Shoring up land for new homes, growing their own food and enrolling in religious schools, they appear to be settling in for the long haul. There are even playgrounds popping up in some places, with solid metal slides and swing sets.

For aid groups, the response has had to shift from treating Rohingya needs as a short-term humanitarian crisis to coming up with longer-term ways to support the refugees.

Alshalabi says over the last few weeks, the work crews have literally been moving mountains.

"For example, that road wasn't here," he says. Pointing in the opposite direction, he adds, "That was a mountain. We cut that mountain to make a platform safe for living."

More than 1,000 Rohingya refugees, working on a recent day for the WFP's construction crews in an area called Camp 4 Extension, earn roughly $5 a day to move buckets of sand and dig drainage ditches.

At one point last year, in a desperate push ahead of the monsoons, Alshalabi says the WFP employed more than 5,000 Rohingya day laborers to reinforce drainage canals, build bamboo bridges and install other basic infrastructure in the sprawling refugee camp. 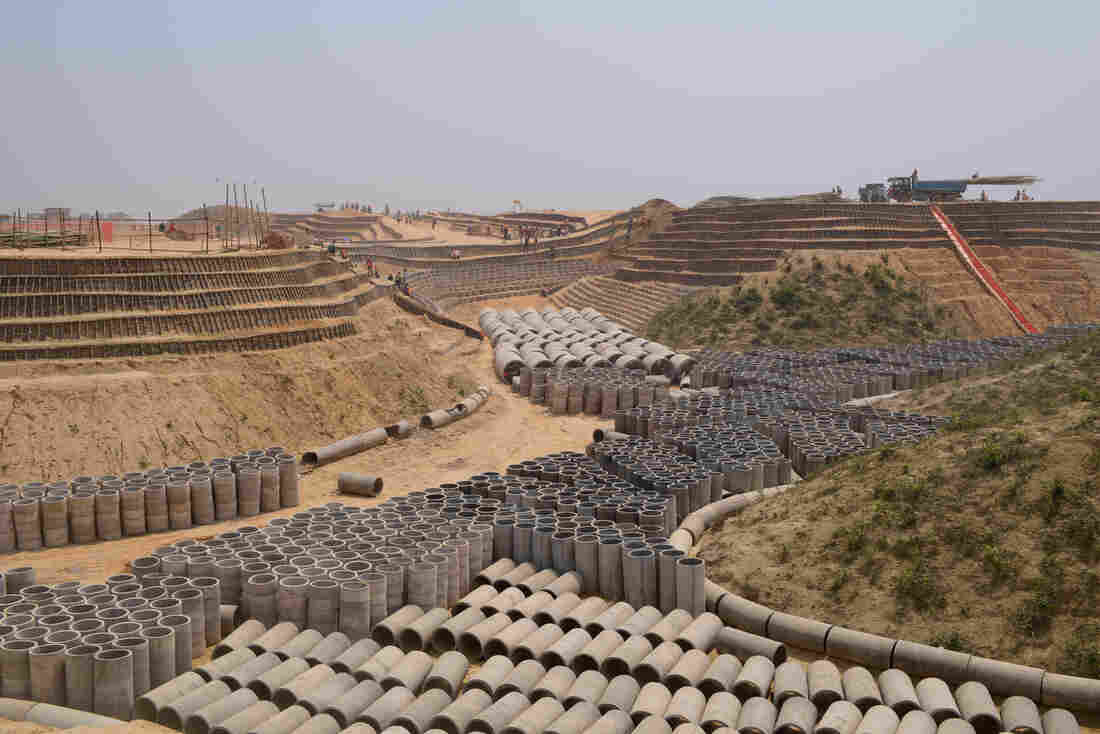 Construction is underway to put in drainage ditches and stabilize hillsides on the edges of the Kutupalong section of the sprawling refugee camp. The shored-up land will be used for new shelters for residents currently living in overcrowded areas of the settlement. Mahmud Hossain Opu for NPR hide caption 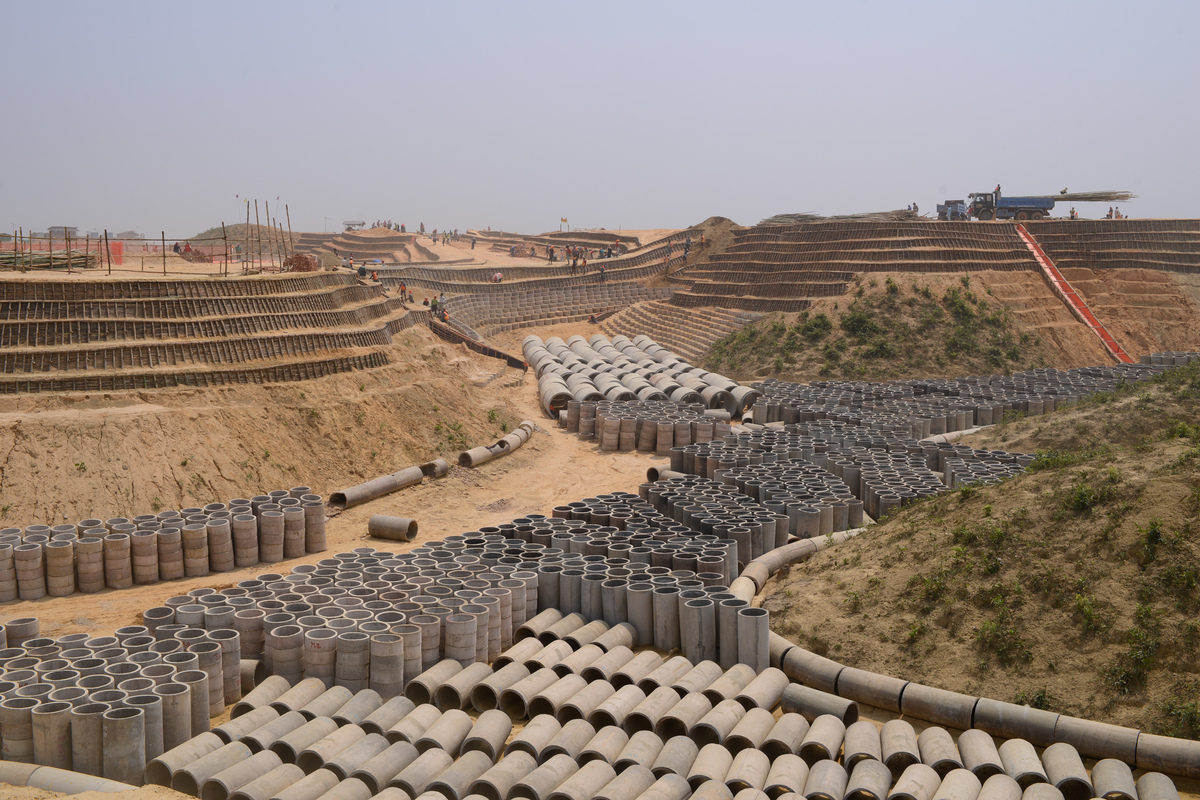 Construction is underway to put in drainage ditches and stabilize hillsides on the edges of the Kutupalong section of the sprawling refugee camp. The shored-up land will be used for new shelters for residents currently living in overcrowded areas of the settlement.

The expanse of newly terraced hillsides, shored-up roads, dump trucks and work crews looks anything but temporary. Yet the Bangladesh government bans Rohingya from building what it calls "permanent" houses. So even the new shelters are made of plastic tarps wrapped around solid bamboo frames.

Most of the Rohingya refugees took shelter in these camps late in 2017, after escaping brutal attacks on their villages in Myanmar by pro-government militias. Nearly 700,000 Rohingya fled across the Naf River into southeastern Bangladesh. They joined roughly a quarter of a million other Rohingya who had already fled earlier violence.

Aid officials are cautious about speculating on how long the Rohingya might stay in Bangladesh. U.N. and other humanitarian officials stress that any return to Myanmar should be voluntary. 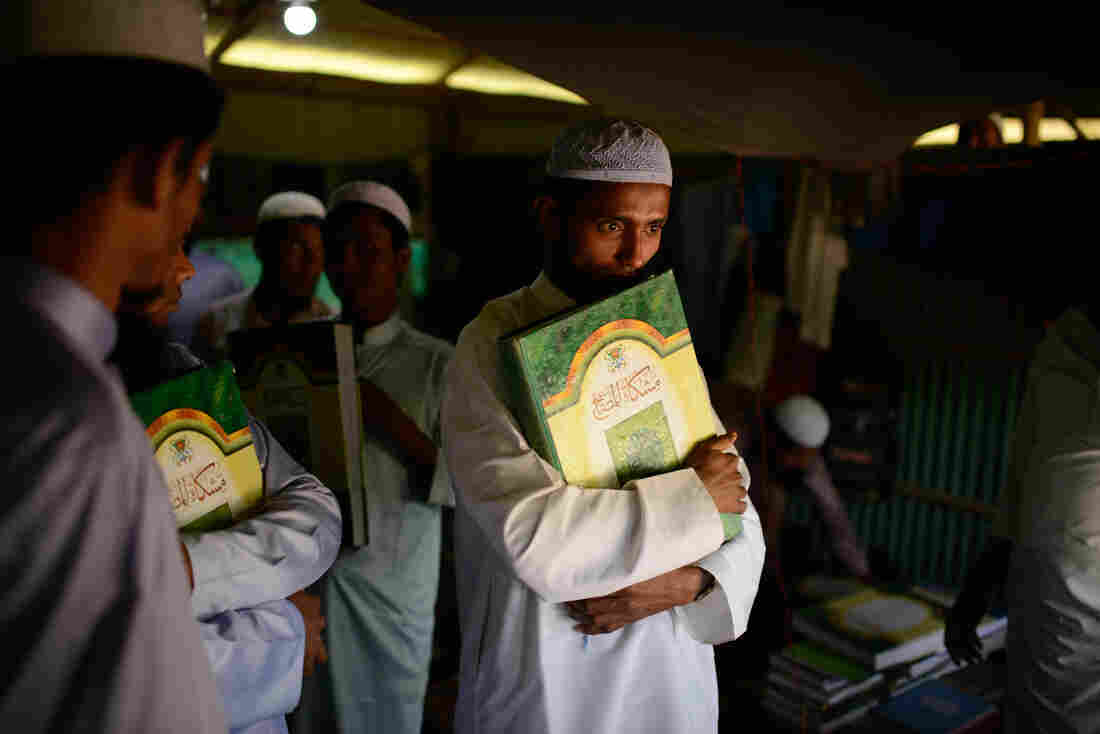 A student holds an Islamic text at a madrassa in the Kutupalong Rohingya refugee camp. With limited educational opportunities for children in the camps, many Rohingya families are sending their kids to madrassas to study Arabic and Islamic studies. Mahmud Hossain Opu for NPR hide caption

Rohingya Muslims are a long-persecuted ethnic and religious minority in Myanmar (previously known as Burma). They have lived in the region for generations, but officials in Myanmar refuse to recognize them as citizens, referring to them as "Bengali" — suggesting that they are from Bangladesh, even though they don't speak the same language — and limiting their movement inside Myanmar. 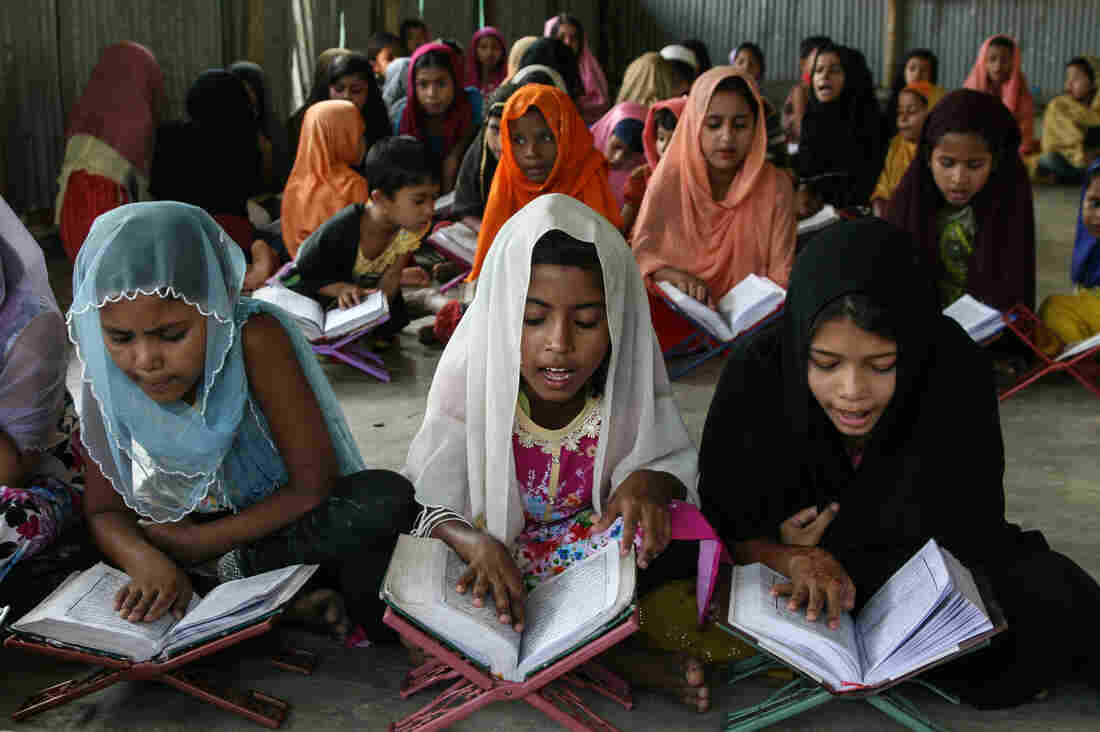 In 2017, after an armed Rohingya separatist group attacked a police station, Myanmar soldiers and pro-government militias launched what the U.N. and human rights groups have denounced as a campaign of ethnic cleansing against the Rohingya. Entire villages were burned to the ground. Thousands were killed.

Myanmar officials say the violence was a security operation targeting terrorists, and the Rohingya refugees are welcome to come home. Myanmar has refused to allow United Nations investigators or international journalists into the country to investigate the alleged massacres. It has jailed two Myanmar reporters who were investigating the killing of Rohingya Muslims for Reuters.

Bangladesh says the refugees have overwhelmed the area around Cox's Bazar and has been pushing for them to return to Myanmar as soon as possible. Host countries seldom have the ability or desire to absorb huge numbers of refugees. But Bangladesh's campaign late last year offering free transportation and resettlement benefits to any refugee willing to go back to Myanmar had exactly zero takers.

In fact — if other refugee crises around the globe are a reasonable guide — it is rare for people fleeing conflict to return home very quickly. Some studies have said that the average refugee will end up in exile for 17 years, although that number has been disputed recently.

Balukali is a densely settled part of what is now the largest refugee camp in the world — it merged with another camp, Kutupalong, and the combined camp now holds nearly 650,000 people. This is more than twice the size of the world's next-biggest camp in Uganda, and about three times as large as the infamous Dadaab camp in Kenya.

The Rohingya refugees in Balukali are packed so tightly together that the residents of one shelter can often reach out and touch their neighbors' hut. Workers have been trying to install solar street lights but have struggled to find enough open space to install concrete footings for the lamp poles.

Noor Kamal, 40, arrived in Balukali along with almost everyone else here in the fall of 2017. Like so many of the residents, he says he fled the militias torching their villages.

"I would like to go back to Myanmar," he says. But he quickly adds that it could be years before he's able to do so. For now, he says it wouldn't be safe to return and he doesn't know when it will be.

Ever since the wave of Rohingya started pouring out of Myanmar in 2017, the refugees have had a fairly consistent set of demands for Myanmar: safety, citizenship and a return of their land. Now Kamal and many others in the camps have a new priority on their list: justice. They want the people who organized and carried out the attacks to be held accountable.

"We want them prosecuted for the crimes they committed against us," Kamal says.

Given that Myanmar denies the attacks and journalists who have tried to investigate the atrocities have been arrested, prosecution appears a long way off.

"It may take a long time," Kamal concedes.

To ease the long-term environmental impact of so many refugees — a population roughly the size of Denver's living in what used to be a nature preserve — international aid groups have built a massive sewage treatment plant on the edge of the Kutupalong section of the camp. Deep wells have been dug to try to make sure the refugees have access to clean drinking water.

Originally, every family cooked over open fires made from wood gathered from nearby hillsides. Eventually, the hillsides were stripped bare. As more and more areas were denuded, women and children walked for miles to collect wood further and further from the camps. It was clearly unsustainable, yet families still needed to cook. 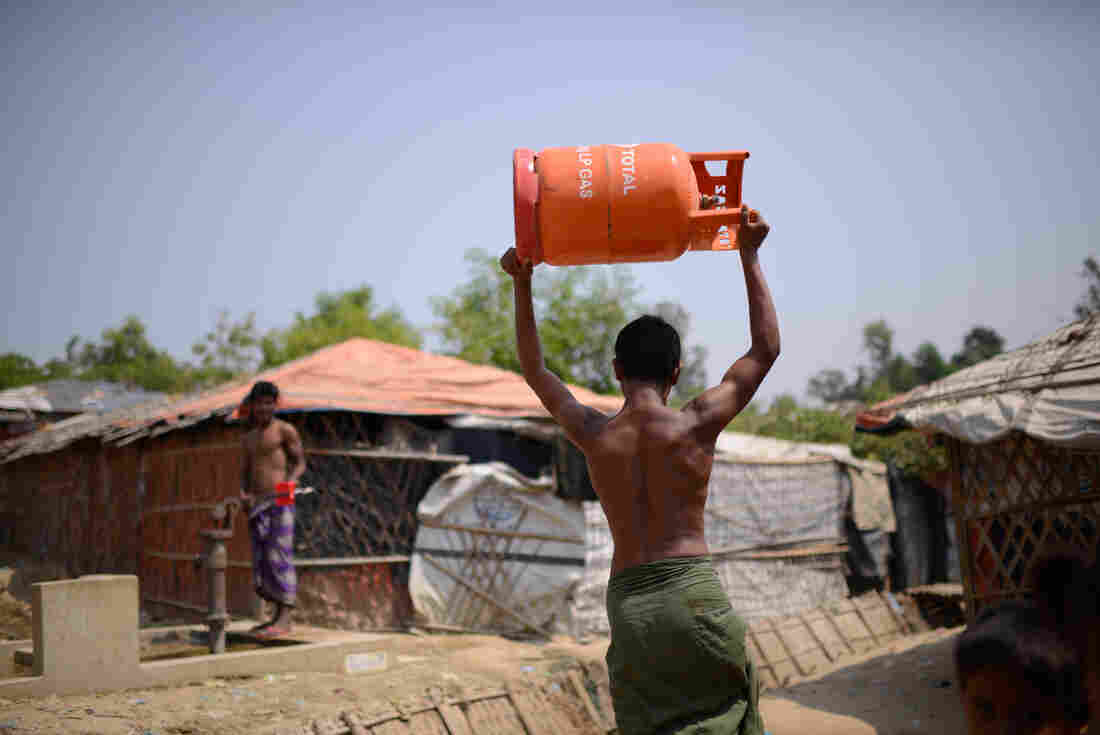 A Rohingya refugee carries a gas cylinder back to his shelter in the Balukali refugee camp. The U.N. refugee agency, along with other aid organizations, has launched a program to replace wood cooking fires with gas stoves. Mahmud Hossain Opu for NPR hide caption

In response, aid groups have begun distributing single-burner gas cookstoves to every household in the camps. This has meant setting up distribution points for residents to swap their used canisters of bottled gas. The U.N. Refugee Agency (UNHCR) and other groups have budgeted $30 million a year for the bottled gas program.

In another sign of this refugee situation shifting from crisis to long-term humanitarian problem, the World Food Program is moving away from handing out monthly rations of rice, beans and cooking oil to every family. Instead, it is creating retail stores where refugees can shop for groceries using electronic rations cards. Each month, rather than shipping tons of food, the agency will simply load credit onto the refugees' cards.

Refugee children still aren't officially allowed to go to schools. Bangladeshi officials don't want the kids settling in. UNICEF and other agencies have instead set up "learning centers" and "child-friendly spaces" where Rohingya kids go for an hour or two a day to study math and English. But Bangladeshi officials don't allow the Rohingya-speaking children to learn Bengali.

Mohammed Arfaan, who is also a Rohingya refugee runs the Al Jamia Darul Arfaan madrassa in the Balukali 1 camp. He says many Rohingya parents are sending their kids to religious schools — 400 students are enrolled at his alone, from nursery school to 12th grade. After a break this spring for Ramadan, his school will add room for another 100 students, he says.

Arfaan's seminary is funded by an aid group from Malayasia. Classes focus on the Quran and Islamic studies, but students can also learn Arabic and English. The madrassas fill an important role for many Rohingya in the camps, he emphasizes.

In another sign that refugees have moved beyond just thinking about daily survival, many have started planting gardens. 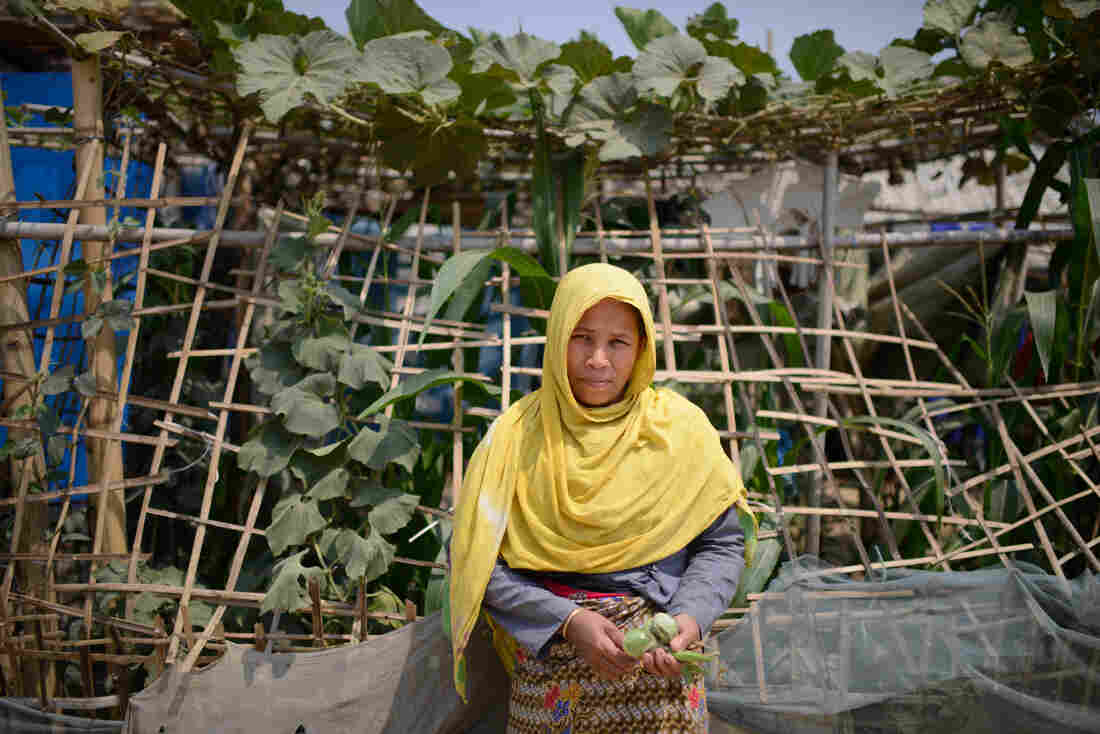 Fatima Katu, 40, has started a small garden at her home in the refugee camp. Compared to her previous shelter in the camp, she says, "We have more space here and now it feels like home." Mahmud Hossain Opu for NPR hide caption

"I'm very happy here," says Fatima Katu, a 40-year-old mother of six standing next to a huge squash vine that's climbed up on to the roof of her shelter. Katu recently moved with her husband and children to a new cluster of homes in Camp 4 Extension, among the neat rows of shelters made of tarps and bamboo.

In addition to the squash vines, Katu has planted beans and chili peppers in a small plot along the south side of their shelter.

Back in Myanmar, her family had a much larger farm, with animals and rice fields. But now, with at least a small plot to grow vegetables, she says she is getting used to a new life in Bangladesh.

Compared to the cramped shelter they first lived in, she says, "We have more space here and now it feels like home."

She can easily see staying in the Bangladesh camp for another five years, she says, maybe even 10.