Accessibility links
Biden Jokes About Hugs In a speech before the International Brotherhood of Electrical Workers union, Biden assured the audience that he had permission to embrace a union worker and put his arm around a child onstage.

Biden Jokes About Unwanted Touching, Says He Will Change His Campaign Style

Biden Jokes About Unwanted Touching, Says He Will Change His Campaign Style 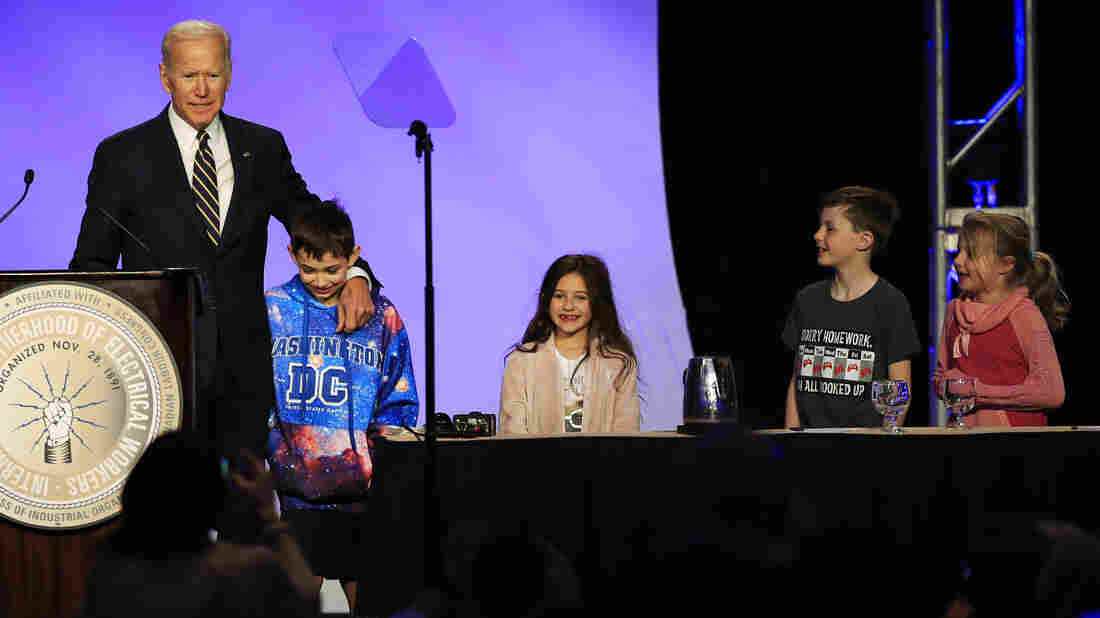 Former Vice President Joe Biden is joined by some children onstage, as he speaks at an International Brotherhood of Electrical Workers conference Friday in Washington. Manuel Balce Ceneta/AP hide caption 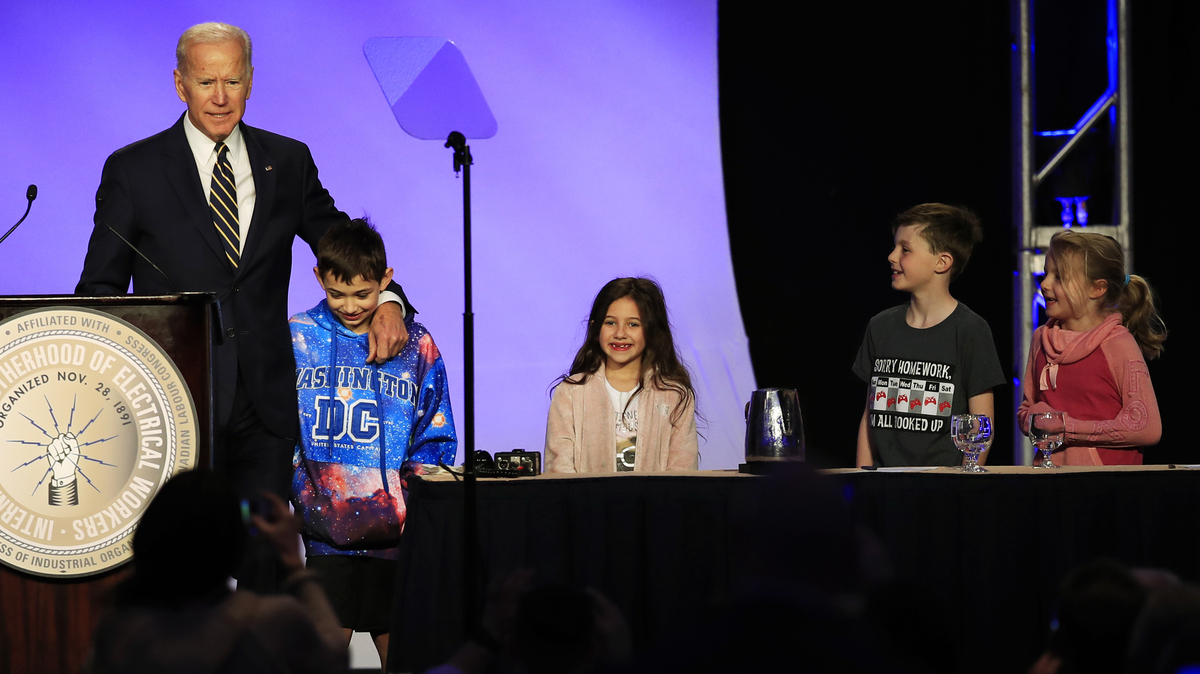 Former Vice President Joe Biden is joined by some children onstage, as he speaks at an International Brotherhood of Electrical Workers conference Friday in Washington.

Former Vice President Joe Biden joked about accusations that he made several women uncomfortable by touching them, as he hugged a labor union president Friday, saying, "I just want you to know I had permission."

Later, during the same speech before the International Brotherhood of Electrical Workers, Biden invited a group of children onstage, shaking their hands and putting his arm around one boy.

"By the way, he gave me permission to touch him," Biden said to laughs from the crowd.

Biden's conduct has come under a microscope in the past week as several women have said they were made uncomfortable by the hugs, shoulder grasps and other close physical contact he initiated during his career.

Answering questions from reporters after the speech, Biden said he was "sorry that I didn't understand more." That was in response to a question of whether he would directly apologize to the women whom he made feel uncomfortable.

However, he noted that his intentions weren't what's important. "I literally think it is upon me," he said, "and I think everybody else, to make sure if you embrace someone, if you touch someone, it's with their consent, regardless of your intentions, regardless if you're trying to bring solace."

And Biden conceded, "I think it's going to have to change how I campaign."

Biden said he is "very close" to announcing a 2020 presidential bid. He said he has been "told by the lawyers I have to be careful with what I say, so I don't start the clock ticking."

But: "I'm very close to making the decision to stand before you relatively soon." Asked what's the holdup, he responded, "The holdup? Putting everything together, man."

Asked whether he could win this Democratic primary given that he has been tagged as a moderate by many activists in the party, Biden dismissed that label. He said he wished he had been labeled a moderate when he ran for the Senate seven times. And he contended, "The vast majority of the members of the Democratic Party are still basically liberal-to-moderate Democrats in the traditional sense."

He disputed that the rank-and-file Democratic voters had lurched that far left. "I'm an Obama-Biden Democrat, man," he said, "and I'm proud of it."

Earlier this week, Biden released a video in which he said he will be "more mindful" of people's personal space. President Trump, who has been accused by more than a dozen women of inappropriate sexual contact, defended his tweeting a parody video showing Biden being approached from behind by a second Biden who rubs his shoulders.

Asked by a reporter whether he was "the right messenger" for that, Trump responded, "I think I am a very good messenger," adding that people "got a kick out of it."

Trump also said that he did not view Biden "as a threat," adding, "I think he's only a threat to himself."

After Biden's speech to the union workers, Trump tweeted that they'll be voting for him instead.

I’ve employed thousands of Electrical Workers. They will be voting for me!