Accessibility links
A 'Purple' Congregation With Diverse Viewpoints Prioritizes Community In an era of red and blue polarization, purple congregations are increasingly rare and a challenge to maintain. They learn to avoid some subjects to maintain congregational harmony. 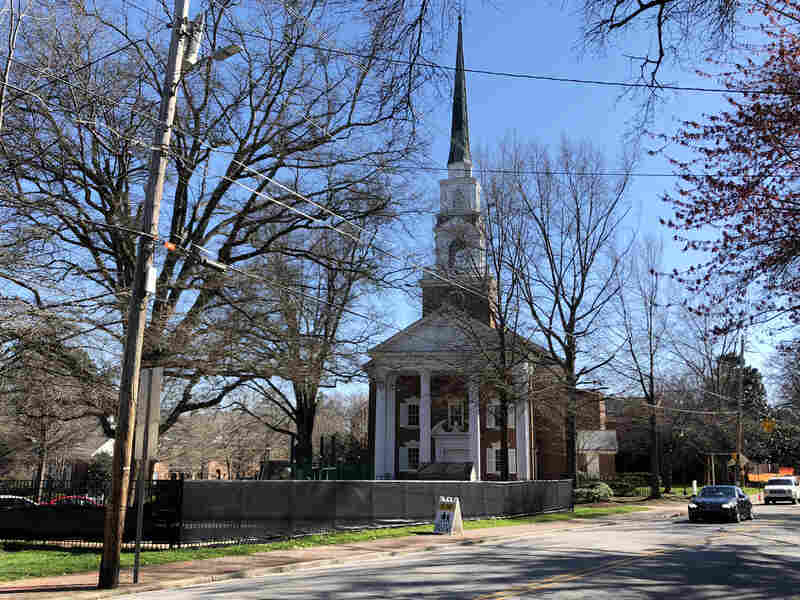 White Memorial Presbyterian Church in Raleigh, N.C., is thriving, with about 4,000 members, at a time when other mainline Protestant congregations are struggling. Just as impressively, it brings together worshippers with disparate political views. Tom Gjelten/NPR hide caption 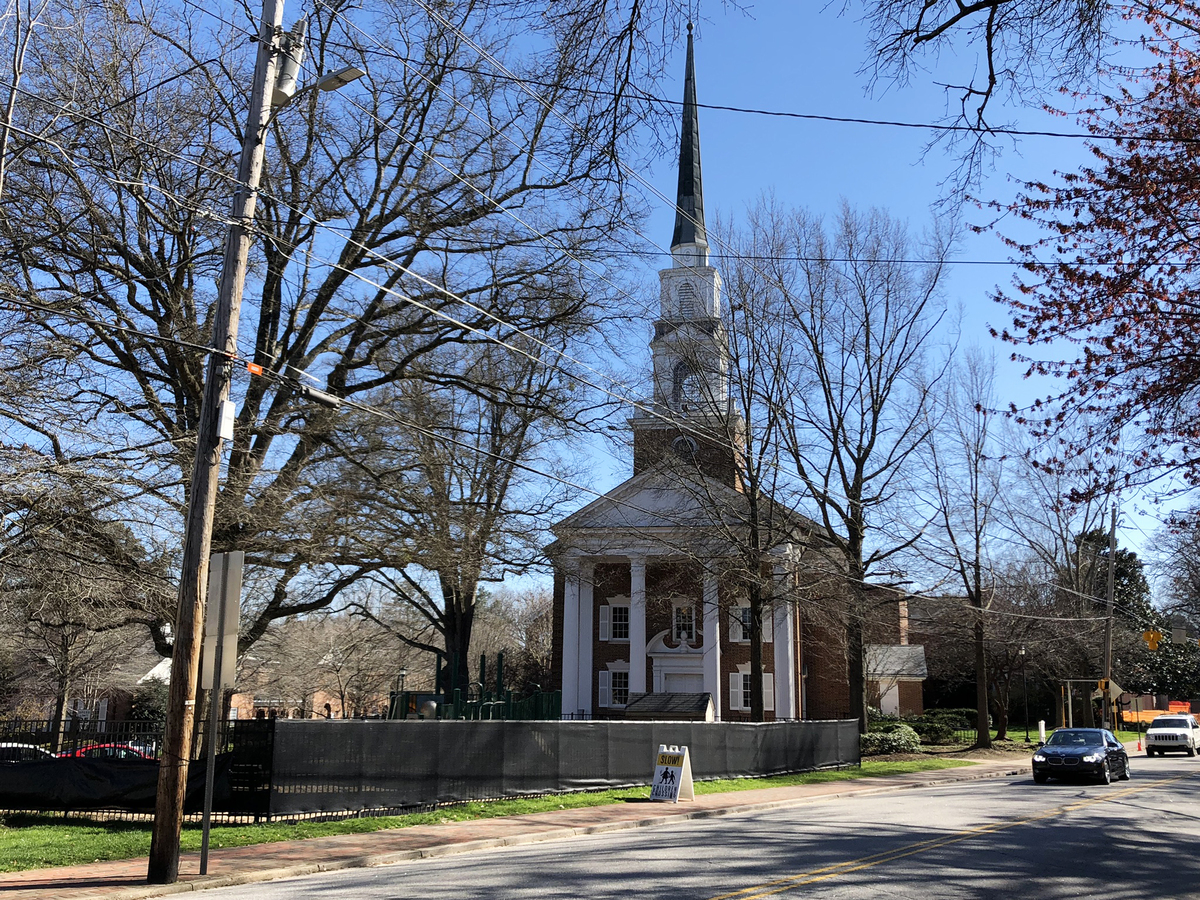 White Memorial Presbyterian Church in Raleigh, N.C., is thriving, with about 4,000 members, at a time when other mainline Protestant congregations are struggling. Just as impressively, it brings together worshippers with disparate political views.

At a time when Americans are moving apart in their political and religious views, worshippers at White Memorial Presbyterian Church in Raleigh, N.C., have learned to avoid some subjects for the sake of maintaining congregational harmony.

"You wouldn't run up to a stove and touch a hot burner," says DeLana Anderson, a church deacon. "So, I'm certainly not going to do that here."

White Memorial is thriving, with about 4,000 members, while other mainline Protestant congregations are struggling. Just as impressively, it brings together worshippers with disparate political views, both red and blue.

"Raleigh is a purple city. North Carolina is a purple state," notes Christopher Edmonston, the church's senior pastor. "Many of the people who have come to church here in the last 25 years are from other parts of the country, and they bring their ideas, their politics, their viewpoints, with them. So we almost have to be purple if we're going to continue to be open and welcome to any person that wants to come." 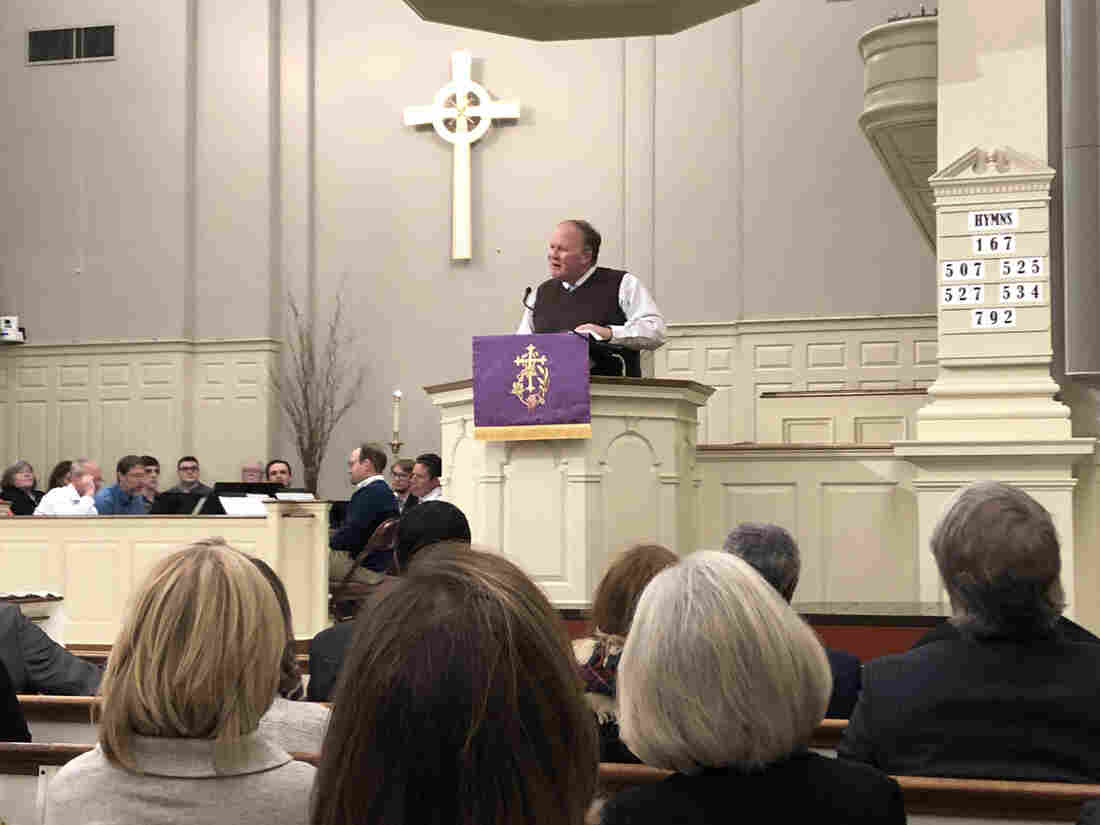 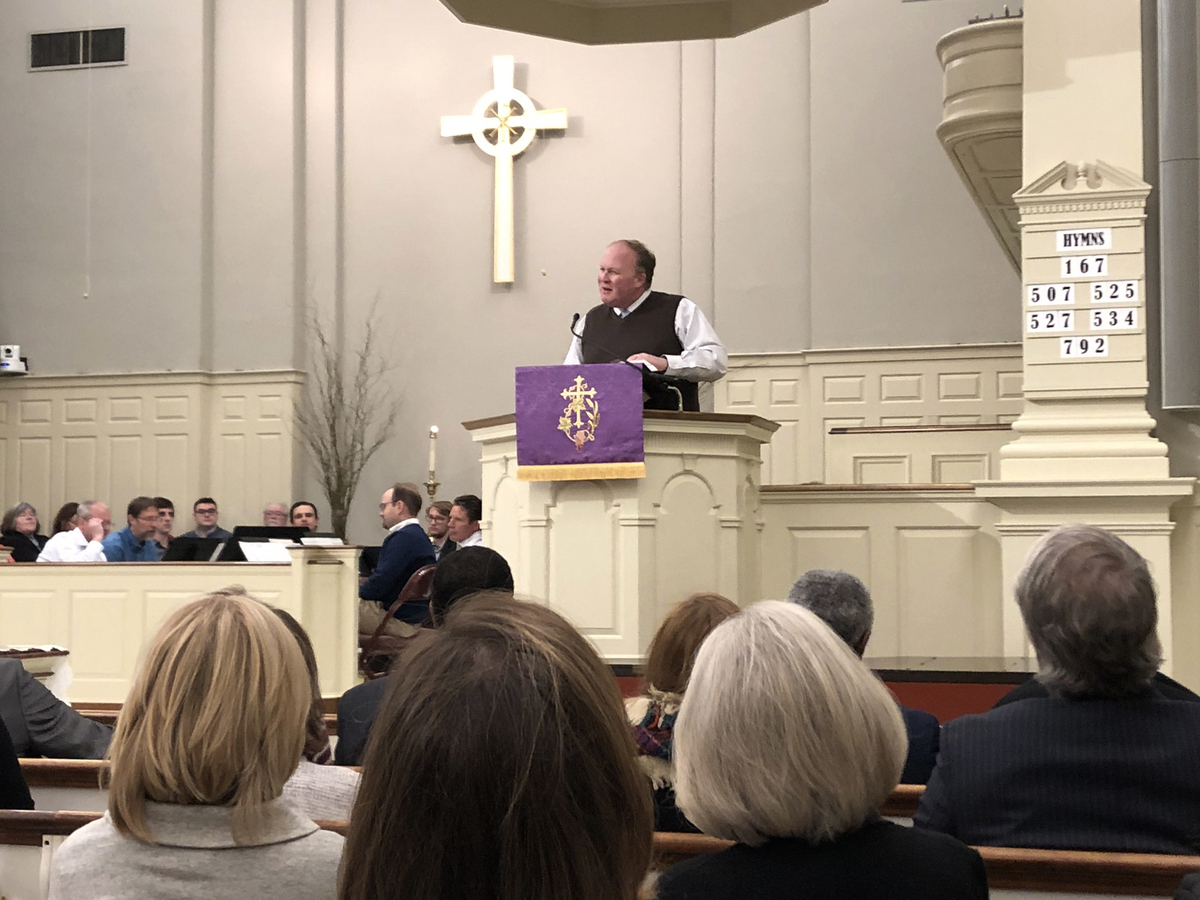 With that as its mission, White Memorial is fighting an uphill battle. A recent report by the Barna Group, a faith-based research organization, highlighted a growing tendency for people to seek "communities that look and believe as they do" and noted that the trend was especially evident among the most frequent churchgoers.

"One of the features we see in our research is that congregations aren't as politically diverse as they used to be," says Barna Group President David Kinnaman. "That's not to say that they were ever bastions of political diversity, but at least there was a sense in which you could worship together with people who were very different from you politically."

At White Memorial Presbyterian, Edmonston preaches often on the importance of civility, even when it means treading carefully around those subjects on which his congregants are likely to disagree.

Congregations aren't as politically diverse as they used to be.

"I absolutely bite my tongue sometimes," he says. "There are things that I resist."

In Edmonston's case, the hot-button issues have included North Carolina's "bathroom bill," which limited gender-segregated restrooms to users with the corresponding biological sex, and state-imposed restrictions on voting rights.

"That's a place where I've tended to be more pastoral than prophetic," Edmonston says. "And that's a choice I've got to live with, whether it's wise or not."

Some of his more progressive congregants are ready to support Edmonston if he decides to be more outspoken politically.

"We're on the blue side of purple," says Anderson. "I have a harder time being with people who are Trump supporters."

I can't be part of a community if I'm not talking with and listening to people around me, especially those who feel differently than I do about religion or political issues.

"Sometimes I wish the church was more forceful," adds her husband, Scott. "But Christopher is a dear friend and a wonderful pastor."

It is a challenge that Edmonston has considered carefully.

"People are coming to our churches with their political ideas already formed," he says. "That puts pastors in a precarious place, because when you speak against that, given the options for people to practice their Christian faith, they will simply go and find a place where the pastor will agree with them." Under such circumstances, Edmonston says, discord inevitably takes the place of discourse, a trade-off he cites repeatedly in conversations, sermons and commentary.

"I can't be part of a community if I'm not talking with and listening to people around me, especially those who feel differently than I do about religion or political issues," he says. "I'm not really part of the community if I'm only hearing the same voices over and over again."

The promotion of discourse over discord may strengthen civic culture in an era of political polarization, but for Edmonston, the mission is more a reflection of Presbyterian theology than it is a commitment to democratic process. By tradition, the denomination emphasizes the development of a worshiping community, whereas evangelical churches focus more on an individual's personal relationship with God.

"I think that's important," Edmonston says. "I just don't emphasize it as much, because that's not the thrust I see in Scripture. The thrust in Scripture [to me] is, 'I'm calling you to be builders of the kingdom of God.' We're trying to build a community that puts into practice what it really means to love your neighbors and welcome them into our spaces."

That welcoming approach includes a major commitment to children's and education programs plus extensive outreach activities, including weekly community suppers and a speakers series, all of which Edmonston says have contributed to his church's membership growth in recent years.

That growth has not come without difficulty, however.

LGBTQ issues the most problematic

In 2015, the Presbyterian Church (USA) informed local congregations that they would have to decide on their own whether to accommodate same-sex weddings. It was a question that White Memorial had previously managed to avoid and is one of the most difficult challenges a congregation can face. 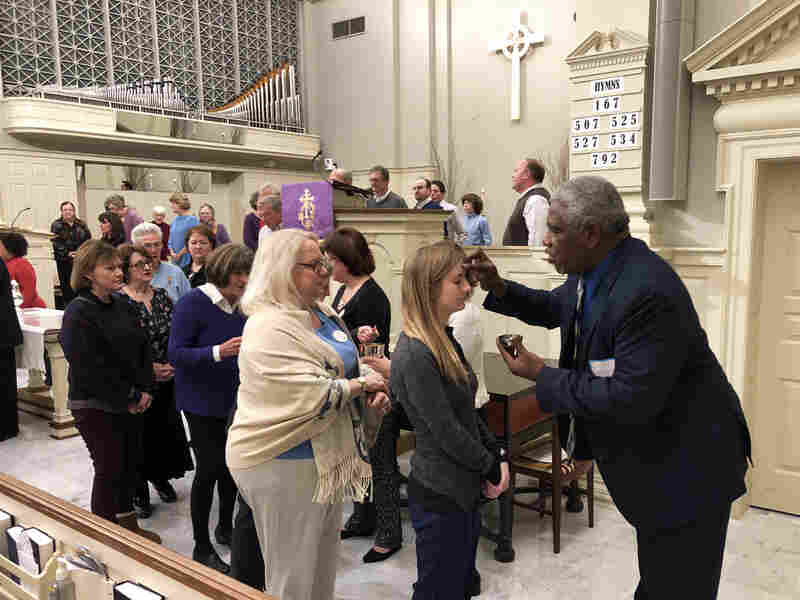 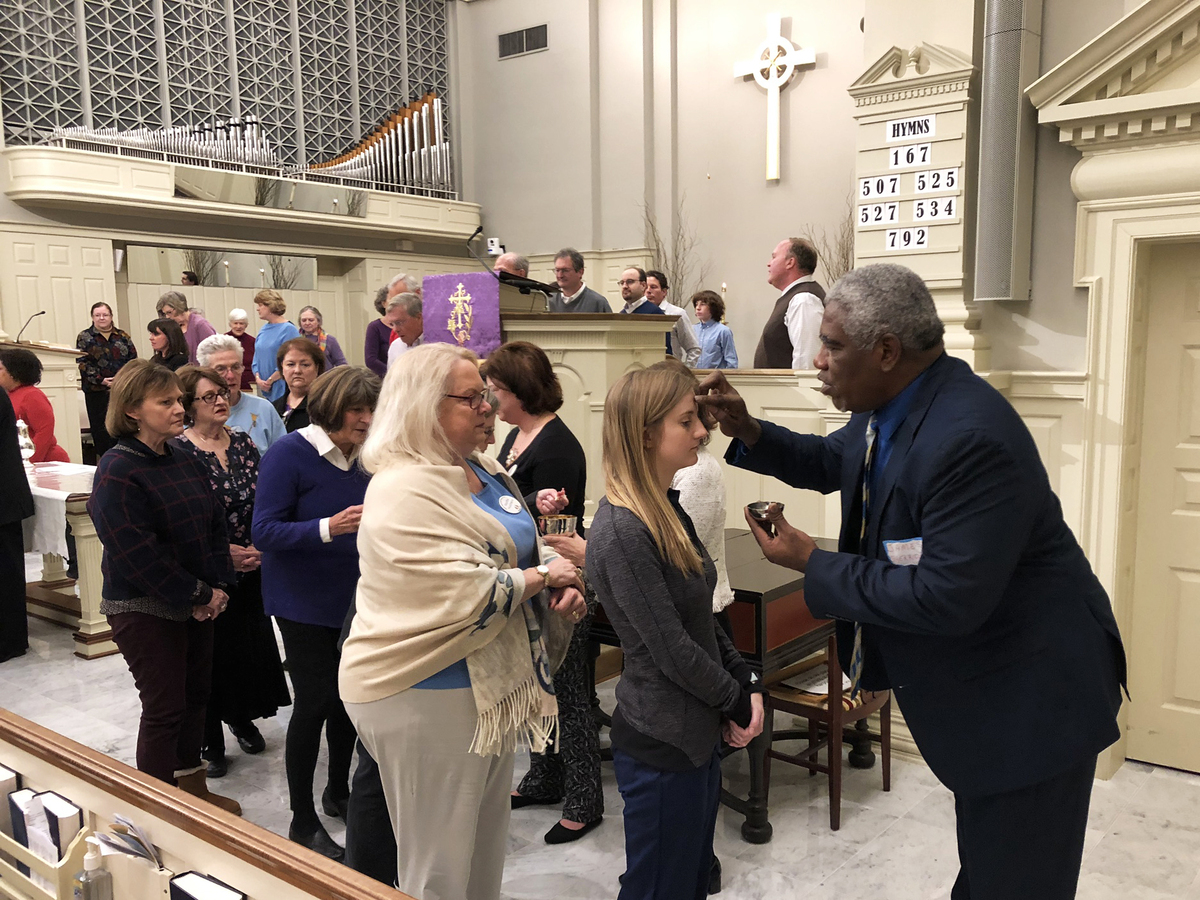 "I have never known a day in the church, from the day I was ordained in 1999 until that summer, when it wasn't an active conversation and an argument," says Edmonston.

Indeed, the Barna Group report found that Christian clergy rated LGBTQ-related issues as by far the most problematic of any they faced, with 44 percent of surveyed pastors saying they felt reluctant to speak about such issues, as opposed to just 18 percent who felt limited in speaking about abortion and 7 percent who had difficulty addressing questions about immigration and poverty.

When Presbyterian churches were informed in 2015 that they should decide on their own whether to accommodate same-sex marriages, no gay or lesbian members at White Memorial had yet asked to be married at the church. But Edmonston and other church leaders felt the congregation needed to address the question without reference to any particular request by a member, so as not to personalize the issue.

Rather than making an executive policy decision, Edmonston and the church's governing board (in Presbyterian terminology, a "session") sought to involve the congregation. A series of public meetings were scheduled, with speakers for and against same-sex marriage. Members with strong feelings, pro and con, were invited to send letters to the church leaders expressing their viewpoints. Most were opposed to a more inclusive wedding policy, according to Carol Vassey, a church elder who read all the letters and responded to each one personally.

"I wanted them to know that sometimes in our family, we agree to disagree," she says, "but that I loved them and I cared how they felt. Some of the people came to the meetings trying to convince us that we were not looking at it correctly. Some just wanted to be heard."

In those meetings, Vassey did not hide her own advocacy for a new church policy to allow same-sex weddings. "I have a grandson who's gay," she says. "I have a nephew who's gay. I have many friends who are gay. We're all children of God."

Choosing to stay together

In the end, the church session voted to allow same-sex weddings, although the margin by which the measure passed was not announced and remains a secret to this day. Edmonston says it was for strategic reasons.

In either case, congregational solidarity could have been damaged — the prospect Edmonston feared most. In his sermon on the Sunday following the vote, he pleaded with his congregation to stay united.

"If you were overjoyed by the session's conclusions, I humbly ask that you respect that there are others who are not there and some who might not ever get there," he said. "If you are one of those who are dismayed, I ask you to remember that the strength of our congregation remains secure and that our love for one another and our devotion to this church family is greater than any single issue."

Finding 'Common Good' Among Evangelicals In The Political Season

Among those who were troubled by the decision was Gregg Thompson, a former Republican member of the North Carolina legislature who was raised in what he calls "a very conservative rural district" of the state.

"Growing up Southern Baptist, I struggled with it," he says of the same-sex wedding issue. "I had to do a lot of soul-searching and a lot of praying about it. But the way it was handled within our congregation helped put me at ease some."

Thompson stayed at the church, but more than 40 members who opposed the same-sex wedding decision left for a more like-minded congregation.

"They did exactly what happens with a culture of discord," Edmonston says. "They went to a place where there was someone who agreed with the position they had."

We all come together in the grace of God.

The loss of a few dozen members out of a congregation of more than 4,000 was a relatively minor development, however, and the process of working through the marriage decision may actually have left the church stronger.

"We had a gentleman in our Sunday school class who really talked all of us into moving to another church," Brown recalls. "And I got there, and I realized I just missed this church too much. So I came back."

What brought him back was the very quality that the church staff has worked so hard to maintain: its strong sense of community.

"Now everybody is rallied back around, together," Brown says. "I mean, [we're] probably closer as a church than I've ever seen us. We all come together in the grace of God."

Edmonston acknowledges that his church's experience may not be easy for other congregations to emulate. The White Memorial membership is almost entirely white and upper middle class, so there may be fewer tensions in the church arising from racial and economic injustice.

"Homogeneity certainly helps," he says. "When you ask for civility, you have to be aware that some of the people you're calling to the table come with some pretty significant wounds."

Against that reality, Edmonston is asked to make the case for civility as powerfully as he can.

"To me, it's always an argument for the long game," he promptly answers. "No matter how right my position may be, if I tear you down while I'm making it, [if I say], 'I'm right, you're wrong, you're stupid,' at the end of that, you and I still have to be neighbors. We still have to live with each other, once the votes are counted."