Accessibility links
Book Review: 'The Poison Bed,' By Elizabeth Fremantle Elizabeth Fremantle's twisty, deceptive new novel is based on the real-life story of the Earl and Countess of Somerset, who were convicted in the murder of a friend-turned-enemy in 1616.

Court Life Is Murder In 'The Poison Bed'

Court Life Is Murder In 'The Poison Bed' 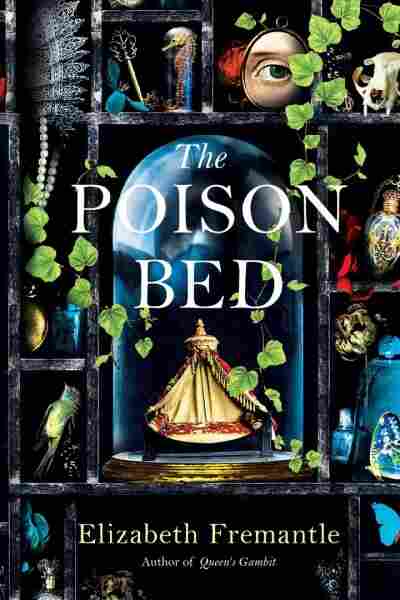 When the press release for The Poison Bed by Elizabeth Fremantle called it "Gone Girl meets The Miniaturist," I took notice — because while I enjoyed Gillian Flynn's Gone Girl, I flat-out loved Jessie Burton's 2014 debut The Miniaturist, which brought readers to a 16th-century Amsterdam as sugar-trade boomtown, a place few of us had ever considered.

You'll immediately get the Burton connection with Fremantle's fifth book, which is based on a 16th-century true crime, the case of Frances and Robert Carr. The Carrs were convicted in 1616 of murdering Sir Thomas Overbury, one of the many courtiers surrounding King James I. Period detail abounds, from the bling-y golden ruffs that Frances's creepy cohort Anne Turner dyes with saffron, to the time it takes to bake a meat pie ("a good hour"), to the high value of an intact hymen amongst the upper classes.

There's also plenty of intrigue and sexy sex, with the intriguing difference that the sexiest sex is between men. When they called Robert Carr "the King's Favourite," they weren't talking about his amazing intellect. The much-older king paws constantly at his boy toy, who lets us know he's only ever felt lust for men before he sets eyes on the slender Frances, who could be a boy were it not for her Rapunzel-like hair. While he dreams of Frances, only Frances, King James is wetly kissing him and maneuvering him into yet another round of "the acts we performed ... certainly they contravened the law, but human desire can take many forms ..." There's a lot of musk released, many musky garments, tons of male pheromones flying fast and furious around the royal personage. (All that musk is eminently human. Still, I wondered more than once if Fremantle really wanted to write erotica.)

However, the author allows her initially farcical version of Jacobean London to ease up as she speeds up the flip-flopping perspectives of Frances and Robert, signaled merely at each chapter's start by the words "Her" and "Him." Despite the speed of their alternating perspectives, the two tell their stories slowly, using their present circumstances and past peccadilloes to heighten the tension about whodunit.

Which is where, of course, the Flynn comparisons come from: Frances is a member of the powerful, ruthless Howard clan, people who will stop at nothing when it comes to gaining royal favor. The special pawn of her nasty Uncle Henry ("she's more than a daughter to me," he tells Carr), Frances has more political knowledge beneath her ruff than most of her male contemporaries will ever learn. She may be, as a female, a pawn in some games, but she hopes at some point to gain her freedom by playing along skillfully. What she wants, she tells us, is to be married in full, to have her own home, to be happy with Robert Carr, to be healed of the brokenness she feels, which she has told him about in sad detail.

Perhaps we shouldn't take her words at face value, what with the Gone Girl comparison and all. Or should we? On your way to finding out, maybe you'll be most affected, as I was, by scenes between Frances and a young woman named Nelly. In those sections we learn a great deal about the severely restricted choices for women in early-modern England — and how those restricted choices also restricted their communication.

Like all the best writers of historical thrillers, Elizabeth Fremantle weaves together documented fact with sensitively imagined fiction to create a novel that helps us understand a time and place better.

But back to Frances Howard Carr and her story, because the second half of the book tells us much more about a different version than the one we've already learned. What could be more tense than being the King's Favourite? Remaining the King's Favourite, that's what. Once married, Frances and Robert have to work harder than a CEO trying to close a billion-dollar deal to maintain their positions. (Perhaps court nobles of various times and places were the CEOs of their day? Discuss.) While Fremantle doesn't live up to Flynn's sly, artful deceit in plotting — who could? — she makes up for it in the slow trail of clues left showing us what really happened at King James' court.

Except, of course, she doesn't. No one will ever know the full truth behind the Carr case. (Don't look on Wikipedia if you don't want your reading of The Poison Bed prematurely spoiled!) Like all the best writers of historical thrillers, Elizabeth Fremantle weaves together documented fact with sensitively imagined fiction to create a novel that helps us understand a time and place better. It doesn't matter if you guess whodunit, early or late. The tale is in the telling, and so is the readerly enjoyment. If your idea of a great summer read is closer to The Miniaturist than Gone Girl, I highly recommend The Poison Bed. And maybe you'll want to keep track of what your spouse buys at the drugstore, too.