Accessibility links
Book Review: 'The Luminous Dead,' By Caitlin Starling Caitlin Starling's tense new horror novel follows a desperate young cave diver who's lied her way into a job on a dangerous planet, and the supervisor who may not have her best interests at heart.

Monsters Imaginary And Real Haunt The Caves Of 'The Luminous Dead'

Monsters Imaginary And Real Haunt The Caves Of 'The Luminous Dead' 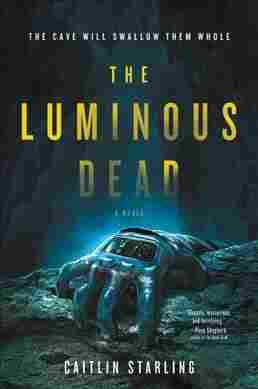 The astronaut alone in their capsule. The explorer stranded far from home. The one who wakes to the flickering light and failing systems of their underground bunker. The lonely survivor in a ruined world — Last Man Alive.

Science fiction loves its stripped-down character list like high fantasy does the crowded dramatis personae. It has a streak of rugged individualism that's been around since the good old days, a vestige of its roots in the westerns, Golden Age sci-fi libertarianism and after-the-bomb freak-outs. To really squirm into someone's head, sci-fi says, you gotta get 'em alone against the world. Anything else is just opera.

Caitlin Starling gets that. She understands the classical strength of the single narrator, the vicious focus of third person, non-omniscient objectivity, the claustrophobic potential of never, ever (almost ever) being able to escape the confines of one person's head.

Of Gyre Price's head, inside her helmet, miles below the surface of a planet, stalked by monsters.

That's The Luminous Dead in brief. It is a haunted cave story. A psychological nightmare yarn spun between just two characters. There's Gyre, the young caver who desperately lied her way into a risky, high-paying job exploring an underground system, and there's Em, her handler, the voice in her ear, her only connection to the outside world. Thus, it is a universe contained completely within the heads Gyre and Em.

Trouble is, Em is crazy.

Trouble is, so is Gyre.

Trouble is, the monsters — some of them, anyway — are very real.

It's tough to know here how much more I should tell you, because the entire architecture of the story hangs on the slow-burn paranoia and the fraying personal connection between Gyre and Em. I can say that the job isn't what Gyre expects it to be. And I can say that she was ridiculously, admittedly naïve to begin with — not really asking any questions, not even requesting a briefing before the book drops her into the initial descent — because she was so worried about her lie being found out. And I can certainly say that even with just two characters tangled up at the core of this book, Gyre isn't the only liar here. Em has secrets, too. She's her own special kind of monster — manipulative, damaged, terrible, but also deeply, deeply human. They both are. The Luminous Dead is too meticulously twisted to let anyone simply be evil without cause, without depth.

And that, actually, is the best thing about these kind of one-man (or, in this case, two-woman) shows. Like Ripley in Alien, like Mark Watney in The Martian, it's the lack of distractions — like multiple viewpoints, a large cast, a pushy narrator — that allows you to slip completely into one skin and wear it around for a while. It allows you to inhabit Gyre's world completely, without interruption and without ... relief.

Because the world we're offered isn't nice. Or comfortable. Or pleasant in almost any way. It's the kind of story that can make a single breath of cool air seem like a banquet and a massage; a sip of recycled urine the most luxurious thing imaginable. It is a claustrophobic story (because cave), a dark and blank and drippy one (because cave). Worse, it is a story about madness and loneliness and claustrophobia and isolation made even colder by the smart, awful, perfect application of technology.

See, Gyre spends her entire time locked in a special protective suit and helmet. Her meals are all nutritive paste delivered through a shunt directly into her stomach. Her air is filtered and recycled. She can't touch her face or scrub her fingers through her hair. She can't feel anything but aching muscles and exhaustion, but her suit can deliver drugs directly into her bloodstream to help. It can be operated remotely by Em if necessary. And everything Gyre sees is filtered through her heads-up display, overlaid with radar and sonar and image amplification, all of which is controlled by Em.

It is a torturous book. Horrifying in small, cutting, personal ways, and in the more classic scare-in-a-dark-room way. But there's an iron rod of panicked strength that runs through the middle of it.

Em, who may not have Gyre's best interests at heart. Who may not want her to see certain things. Who has profited by the poverty and desperation of this planet's population as the mines fail and jobs become more and more scarce. Who has sent other cavers down this hole before, not all of whom came back.

But also the only thing keeping Gyre alive.

So yes, The Luminous Dead is a book about spelunking and ghosts and the ways we are haunted by the dead and the missing. There are sequences about diving through flooded, silt-blind sumps that will raise every hair on your neck, and a long stretch (arguably too long) in the middle where even the mercy of having two characters for company becomes winnowed down to just one as Gyre, in a fit, cuts her communications with the surface.

It is a torturous book. Horrifying in small, cutting, personal ways, and in the more classic scare-in-a-dark-room way. But there's an iron rod of panicked strength that runs through the middle of it. A will to survive that is palpable. And by the time it is winding toward its conclusion, all the lies, the nightmares and the psychological games fall away and The Luminous Dead simply becomes a bloody race to the surface.

There's no forgiveness waiting there. No absolution. Only escape from the monsters down in the cave and — maybe — the ones that Gyre and Em brought down with them, too.