Accessibility links
'Amazing Grace' Gets LA Premiere In Church Where It Took Place In 1972, the Queen of Soul recorded a live album at the New Temple Missionary Baptist Church in LA. After her death, the film has been released and was screened at the same church it was filmed. 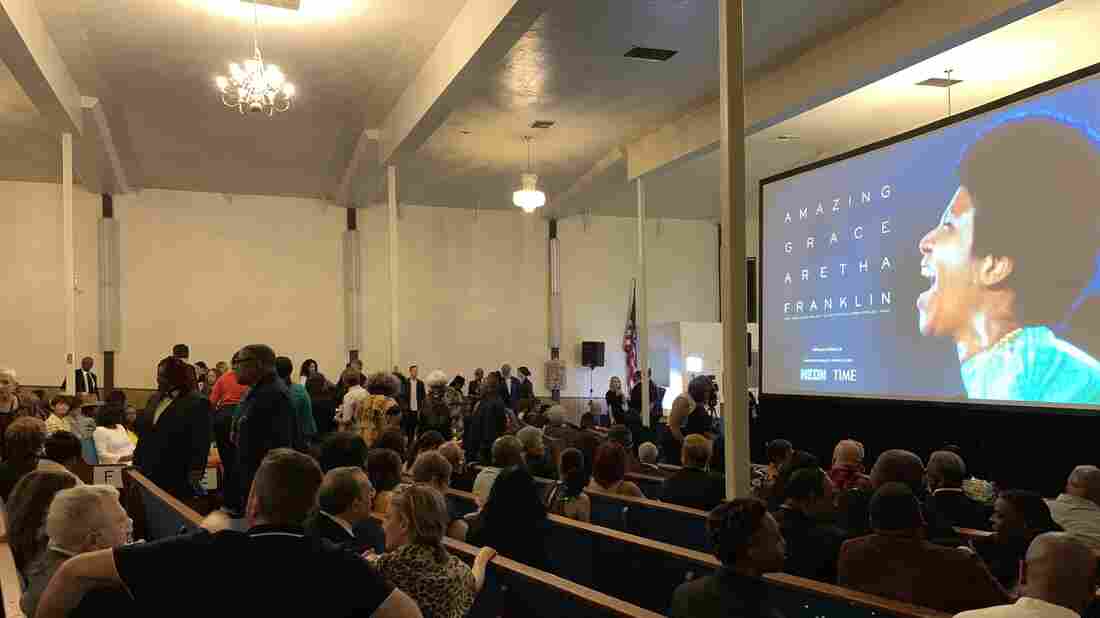 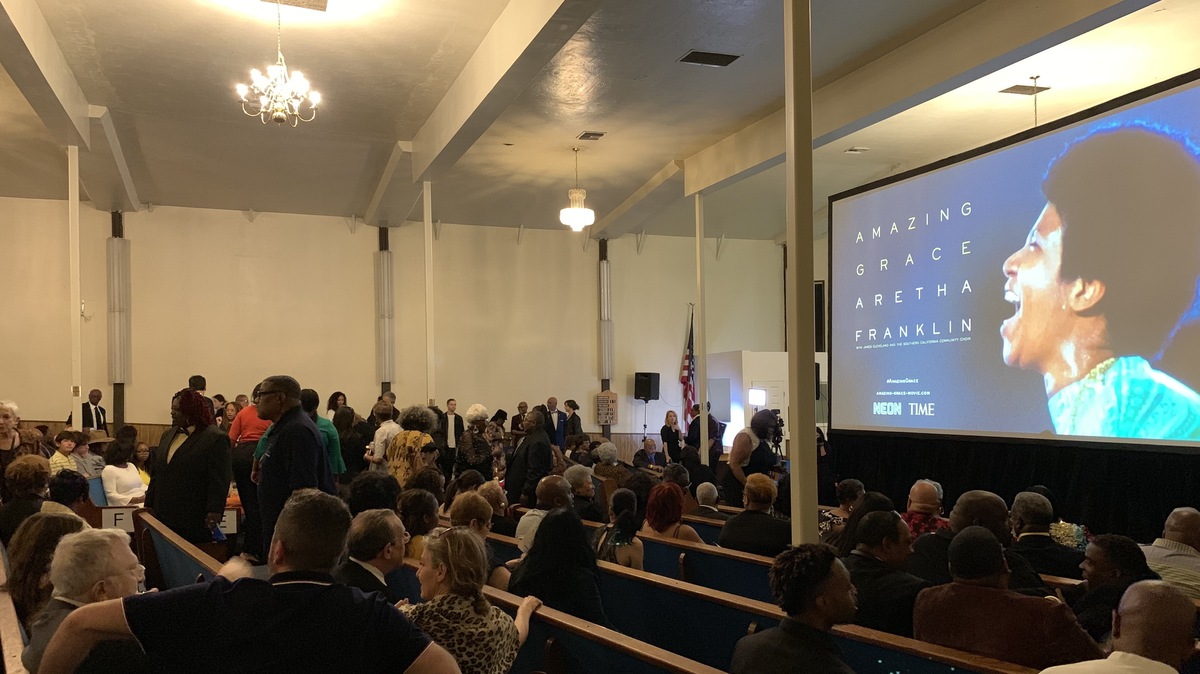 Viewers find their seats inside The New Temple Missionary Baptist Church for the LA screening of Amazing Grace.

Nearly a half-century ago at a Baptist church in Watts, Calif., Aretha Franklin recorded Amazing Grace. The 1972 album went on to become the best-selling live gospel album and while those live sessions were filmed, the Queen of Soul did not want the concert film to be released. Forty seven years later, the documentary has been released and on March 31, the film had its West Coast premiere right in that same Baptist church where it took place.

It was an odd scene for a movie premiere; people all dressed up like they were going to church. But they were, in a sense. The New Temple Missionary Baptist Church is still a house of worship, although, the rows of pews used to be folding theater seats because the building started out as a movie theater.

For two nights in 1972, the church became a recording studio as the Queen of Soul returned to her gospel roots and sang to the Lord. Only 29 years old at the time, Franklin was at the pinnacle of her career.

The Sound Made Flesh

"Against the better advice of her recording company, she decided to go back into the church and record a gospel album," Sabrina Owens, Aretha Franklin's niece, says.

Owens, who was 14 at the time, wasn't there those two nights. And like many, she didn't know that a young Sydney Pollack, who would later direct Tootsie and Out of Africa, was there. He was filming the entire event, which was hosted by Franklin's longtime mentor, himself a giant figure in gospel music, Reverend James Cleveland, the former minister of music at Aretha's father's church in Detroit.

Pollack captured the electric, soulful performance. He also captured the sweat on Franklin's face and audience members dancing in the aisles. He captured the experience of being there. Unfortunately, he failed to capture the film takes with a clapperboard, so it was impossible to synchronize the audio with the images.

"When you see it, then it's a different experience," producer Alan Elliott, who grew up obsessed with that album, explains. "Because then you can see that James Cleveland breaks down in the middle of 'Amazing Grace' and starts crying, and has to leave the piano." 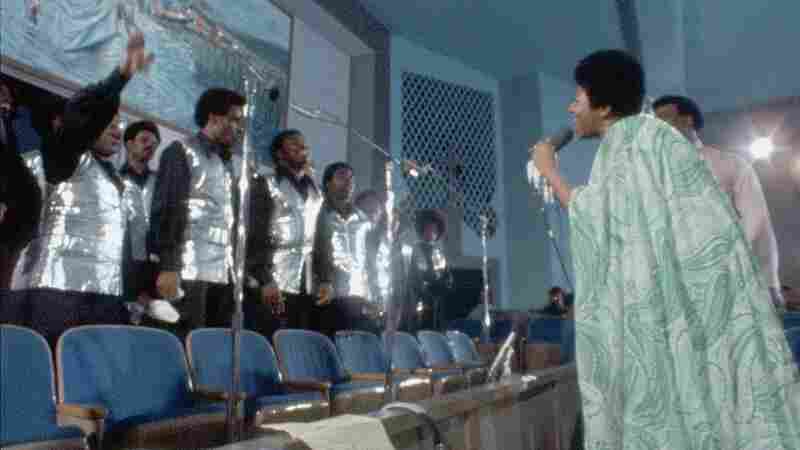 Aretha Franklin and members of the Southern California Community Choir in a still from the documentary Amazing Grace. Neon hide caption 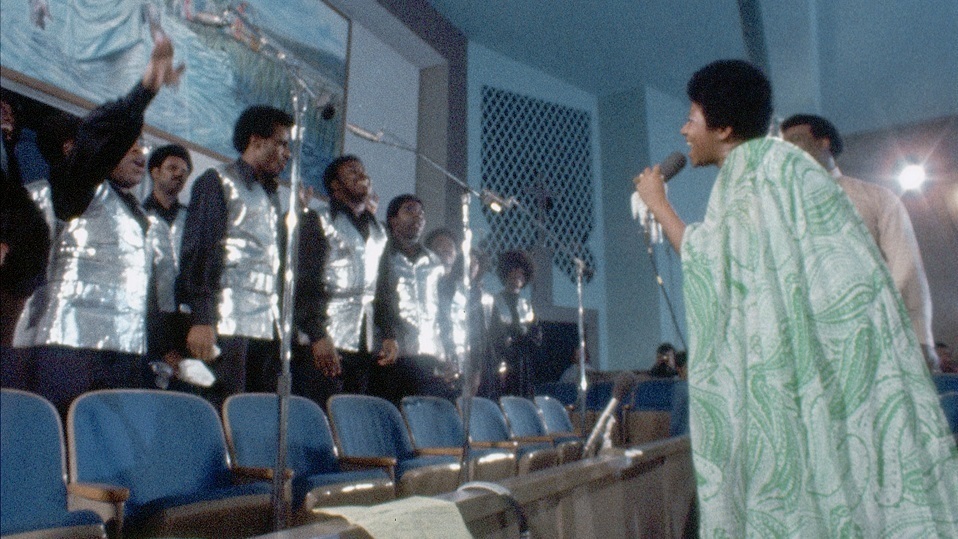 Aretha Franklin and members of the Southern California Community Choir in a still from the documentary Amazing Grace.

Before Pollack died of cancer in 2008, he gave Elliott his blessing to try to finish the film. Elliott mortgaged his own house to buy the negative from Warner Brothers without knowing about the synchronization issue. "And so, there was this bipolarity to it," Elliot says. "Which was: 'Oh my God, we have to start from scratch.' And then on the other side: 'Oh my God, we have all the footage.' Then, there was an opportunity, and that was really exciting."

Fortunately, technological advancements enabled Elliott to sync the sound. He fashioned a 90-minute concert film with no narration, no interviews, just Aretha singing her heart out backed by the Reverend Cleveland and the Southern California Community Choir.

But there was another major obstacle: Aretha Franklin. The singer sued Elliott in 2011 to prevent a private screening and she stopped him from premiering the film at the Telluride Film Festival in 2015, and again in 2016. No one really knows why she didn't want the film to come out, though after she died in August, her family was quick to green light the release.

"All the technical difficulties are fixed and when I saw it, it was such a moving and powerful experience, I thought that everybody deserved to see it," Owens says. "And since Aretha did not have an issue with the content of the film, only other things, she would have loved this. And I think she would have wanted her fanbase to see it." 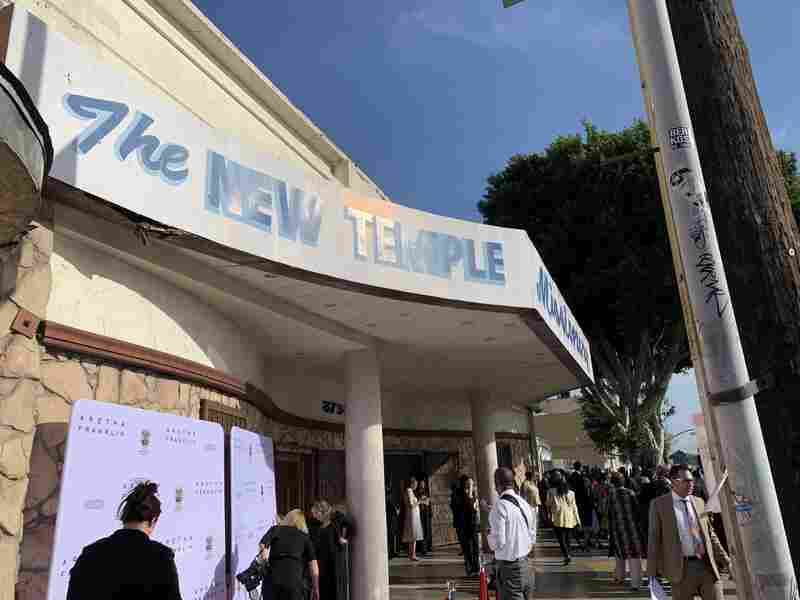 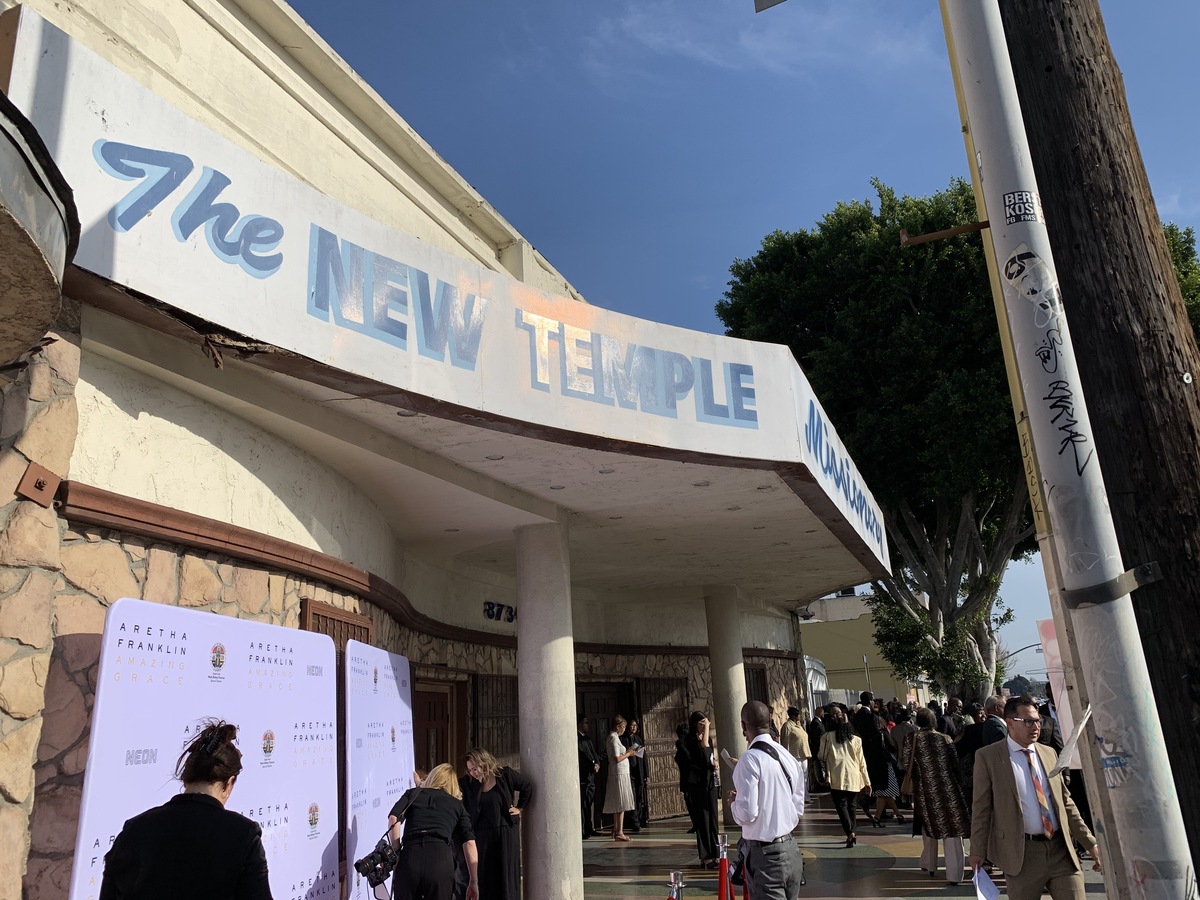 Fans file into The New Temple Missionary Baptist Church in Watts, Los Angeles for the screening of Amazing Grace.

And so, on a cool spring night in Watts, the documentary team hosted a premiere of Amazing Grace right in The New Temple Missionary Baptist Church. The church has been retrofitted a little, but to Elliott, it's still a holy site. Even the big mural of Jesus in a river, which hovers over the choir throughout the concert film, is still there.

"The other day somebody asked me, 'What's the historical meaning of this church?'" Elliot recalls. "And I said, 'Well, you know, it's like what Mozart's church or Bach's church is, this is what this church is for gospel music.'"

Singer Eddie Kendrix was one of several people at the premiere who was there in 1972. "I've known Aretha since she was like 13 years old," Kendrix says. "She's always been bigger than life, so it was no mystery that all of this is going on. That's the type of talent she was."

A number of original choir members, now with grayer hair and oxygen tanks, sat up front. Reverend Dr. Alexander Hamilton, who had directed the choir and arranged many of the songs, led his singers in two spirituals from a wheelchair. As the movie started, the New Temple Missionary Baptist Church once again became an Aretha Franklin concert and a church service all at once. "You can't hardly listen to her without singing along," Kendrix says.

Nina Gregory edited the audio of this interview for broadcast.