Accessibility links
Questions For Arkady Martine, Author Of 'A Memory Called Empire' City planner and Byzantine historian Arkady Martine puts her academic experience to work in a new novel about an ambassador from a small space station who comes to the court of a devouring empire. 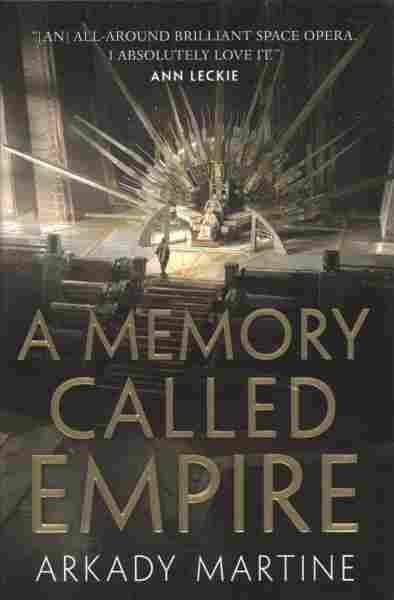 Before she was a novelist (and occasional NPR contributor), Arkady Martine was a Byzantine historian and an apprentice city planner — and that expertise is on display in her new book A Memory Called Empire. It's the story of an ambassador from a small, independent space station on the edge of a huge, devouring galactic empire, who arrives in the imperial capital and is almost immediately launched on a wild ride of intrigue, courtly manners, poetry and plotting.

Martine's Teixcalaanli Empire has overtones of Byzantium and the Aztecs, among other cultures. "I wanted to think about empires that were conquest-oriented, that were war-and-sacrifice oriented, and that led me to the Mexica — the Triple Alliance of the Aztecs," she tells me in an email conversation. "The world of Teixcalaan isn't Byzantium, and it isn't the Mexica, and it isn't any of the other cultures I added in, but I wanted to look outside of what I knew best, see what other imperial structures with a universalizing we-are-the-center-of-the-world ideology could add to my conceptions of empire and its functions. And also I wanted to pull away from the elements of Christian theology which are deeply embedded into Byzantine imperialism, and one of the ways I did that was to design a religion that was based on blood sacrifice (though, in the period of this book, Teixcalaan is a long way away from any actual human sacrifice practices, though they're drifting around in the background.)"

What other cultures are in the mix? The way the Teixcalaanli treat outsiders seems like it has some real world resonances.

Some Mongol steppe empire, certainly — the Emperor's Sworn Band concept is straight from Central Asian modes of political governance — but more importantly, there's a lot of American cultural imperialism in how Teixcalaan spreads itself across the galaxy. It's not just a military power — it's a pervasive cultural one. Unavoidable, like McDonald's and Hollywood movies.

And my development of the civilized vs. barbarian concept that Teixcalaan is based on is from Rome, and Byzantium (which is still Rome, according to Byzantines). But it is also the experience of many, many people right now, who either choose or are forced into assimilation into a larger, more dominant and oppressive culture — and how that assimilation is never total, always conditional, never complete.

I'm an American Jew. It's a story-concept that spoke to me very personally.

Poetry plays a huge role in the empire's cultural and political life — what inspired that? And what was it like trying to write poetry in English that had to reflect poetry written in Teixcalaanli?

... there's a lot of American cultural imperialism in how Teixcalaan spreads itself across the galaxy. It's not just a military power — it's a pervasive cultural one. Unavoidable, like McDonald's and Hollywood movies.

A great deal of the plot of A Memory Called Empire moves through the speaking of, transmission of, and use/reuse of poetic form: there's a poetry contest that prefigures a war, for example, and a protest song which first incites a riot and then is used to calm it down. Poetry is capable of all these things; I am not instilling it with any special quality that it lacks in the world we live in. Anglophone Western culture of the 21st century has mostly relegated the political power of poetry to in-group settings: the open mic, the protest rally. But poetry has a political valence which is widely recognized elsewhere, both currently and historically. And I really wanted to use that — to think about poetry as emotional carrier wave for politics, philosophy, ideology. Also, it's a pretty direct lift from Middle Byzantine literary culture: Teixcalaan, like Byzantium, has a literature that centers poetic forms in part because their literature is one which is performed out loud in political settings. Oratorical verse, with rhythm and meter, is a valued skill set amongst the intelligentsia. (The poetry contests in A Memory Called Empire are a little bit like rap battles with politics in. Think of the Cabinet Battle songs in Hamilton and you've got the idea pretty much solid.)

I wrote three full poems and many partial ones for the book, including two versions of the same protest song, a political intervention in the form of a three-line epigram, and a public safety message that used to be part of an epic about city-building. Teixcalaanli poetry is explicitly supposed to be in complex meter, and sometimes also in complex rhyme — this is that skillset use again — but I deliberately ignored that when I wrote the poetry for the book, because, well — writing in English meter wouldn't match up with what the Teixcalaanli meter would be. And also I'm terrible at metered poetry. I can fake being a genius political poet in free verse, but all my attempts at metered poetry come out twee as hell. The choice to gesture at poetry instead of trying to achieve the heights of the form let me not get trapped in having to be really, really good. It's a shortcut. But I wanted readers to think that Teixcalaanli poets were incredible, whether or not that particular reader liked English poetry — so I didn't want to trip them up with English poetry poorly done, or which might ring false or silly and throw them out of the story.

You're also a city planner — tell me how that played into the way you designed the City and its AI.

The poetry contests in 'A Memory Called Empire' are a little bit like rap battles with politics in. Think of the Cabinet Battle songs in 'Hamilton' and you've got the idea pretty much solid.

Urban planning is a long history of cities (and their planners) seeing, and deliberately not seeing, the people who live in them. Working in city planning makes me consider the city as an organism, as a machine for living in (to deliberately misquote Le Corbusier). And that is reflected in the City which is the Jewel of the World in A Memory Called Empire. The City — the Jewel of the World, the heart of Teixcalaan — is an oecumenopolis, a world-city: essentially a planet which has been fully urbanized aside from its oceans and its natural reserves. City-planets are quintessentially space opera for me — Star Wars' Coruscant, for example, but also any number of others. I love the visual of the idea. All that architecture, a planet that would glow like a jewel, lit up with glass and metal and lights. But cities aren't just visuals, they're real, complex, messy places, and a planet-size city would be complex to the point of near-ungovernability.

Which of course is where the algorithm-driven subway system and other city-ruling algorithms and artificial intelligences that I created for the Jewel of the World come in. If you have something so complex as a world-city, it would require artificial intelligence to keep tabs on, most likely. And algorithmic processes, to help predict what its needs are. And because I study history, and because I work in city planning, I knew when I began thinking about those algorithms that they were going to be biased, be about panopticon control, be about making citizens of Teixcalaan visible to policing and governing forces, and making non-citizens either invisible or singled out for persecution. Because that's what algorithms tend to do, because algorithms are written by human beings.

I'm a worldbuilding nerd and I love the tiny details that make a setting pop ... like those Teixcalaanli names! (They reminded me of reading National Geographic stories about excavations at Rio Azul when I was little) How did you come up with them?

I actually got Tor to put up a version of my (terrifyingly extensive) document about How Teixcalaanli Names Work, over here.

But the real inspiration for the number-noun naming system comes from the naming practices of the Mixtec people of Oaxaca, who, like many Mesoamerican peoples, were named for the day in the 260-day cycle of the year on which they were born: a cycle of thirteen numbers and twenty signs (animals, plants, and natural phenomena). Teixcalaan has a lot of Mesoamerican influences, and choosing to use this kind of name felt like it really deepened and specified the cultures I was referencing.

Am I going to a special literary hell because my brain kept rendering the Emperor's name as One Direction?

Yes, you are going to a special literary hell, but you won't be alone there. I realized fairly early on that Emperor Six Direction was, er, Reminiscent of a certain band. And yet I couldn't bring myself to change it, because it's such a perfect name for a Teixcalaanli emperor: All six of their directions! North, south, east, west, earth, sky. Emperor of everything, stretching out in all directions!

On the other hand, my friend Max Gladstone and I ended up giving all the One Direction boys Teixcalaanli names as a kind of preemptive self-defense, so I am not sure whether I regret or am gleeful about my choices here.

Editor's note: For the record, Martine says Harry actually IS named One Direction in Teixcalaanli. Zayn is One Amaryllis, Niall is One Lathe, Louis is One Silicon — or maybe Semiconductor — and Liam is One Expanding Insulation Foam. She also says you can consider this canon.

Will there be more stories set in this world? I want to know what Three Seagrass does next. Or what the deal with the scary ring-ships is.

Yes, there absolutely will be! The direct sequel (which will tell you both about the scary ring-ships and what Three Seagrass does next) is titled A Desolation Called Peace, which I thoroughly stole from Tacitus. (I was reading Tacitus in a bar in Prague, long story. But it's the best line. Rome makes a desert and calls it peace.) The book itself is about incomprehensibility and impossible wars. A lot of it happens on a Teixcalaanli battleship. There's interstellar mail fraud. And a kitten. (Technically, several kittens). Also a maybe-genocide, some extremely unwise kissing, and the usual dose of political machination. I was inspired by the horror of apocalyptic violence which happened between Cortez and Moctezuma, for what that's worth. It comes out in 2020. After that, I hope that I get to write a novella about Nineteen Adze, and maybe some other books set in Teixcalaan — it's not a series, exactly, but it is a universe, and I love it very much and want to keep exploring it.