Accessibility links
A Baby In Cardiac Arrest And An Emergency Dispatcher Who Did Not Know Telephone CPR Emergency dispatchers play a key role when people go into cardiac arrest, but there are no national requirements that they be trained in telephone CPR.

Listen · 7:02 7:02
A Baby In Cardiac Arrest And An Emergency Dispatcher Who Did Not Know Telephone CPR 7:02 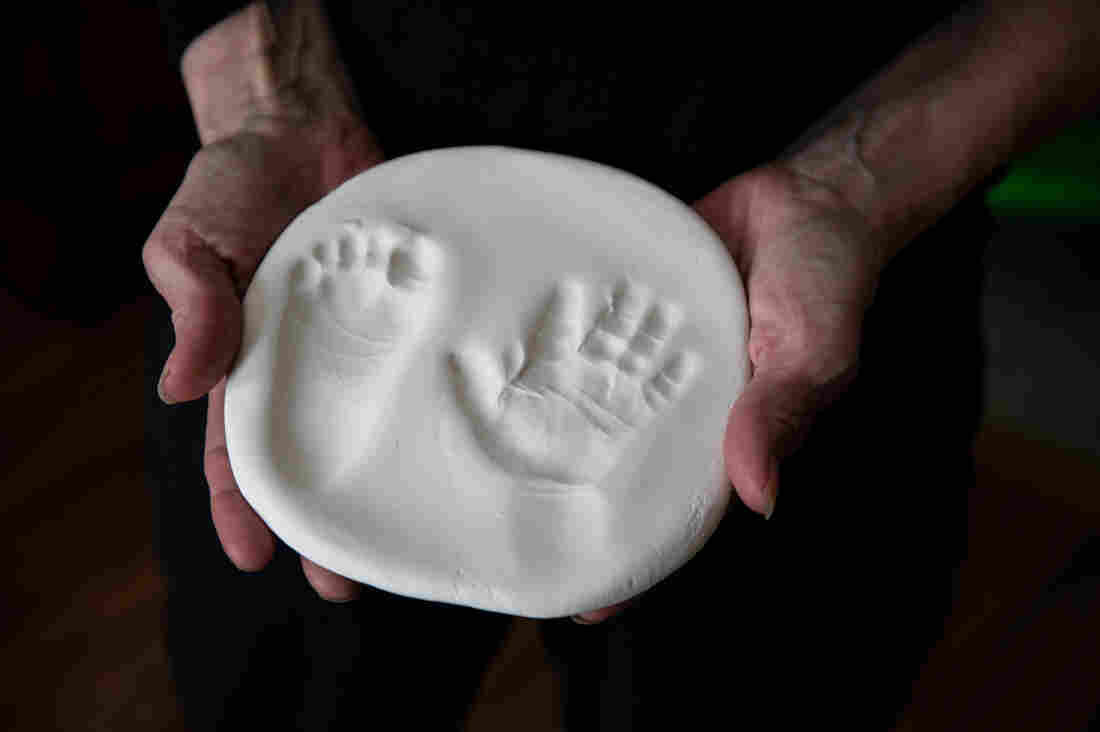 Barbara holds an imprint of her grandson Alijah's hand and foot that she was given after he died. Jessica, the baby's aunt, called 911 when he was found limp. The operator failed to recognize that the baby was in cardiac arrest, meaning that his heart had stopped and he was not breathing, according to three emergency medical experts who reviewed a recording of the 911 call. Kayana Szymczak for ProPublica hide caption 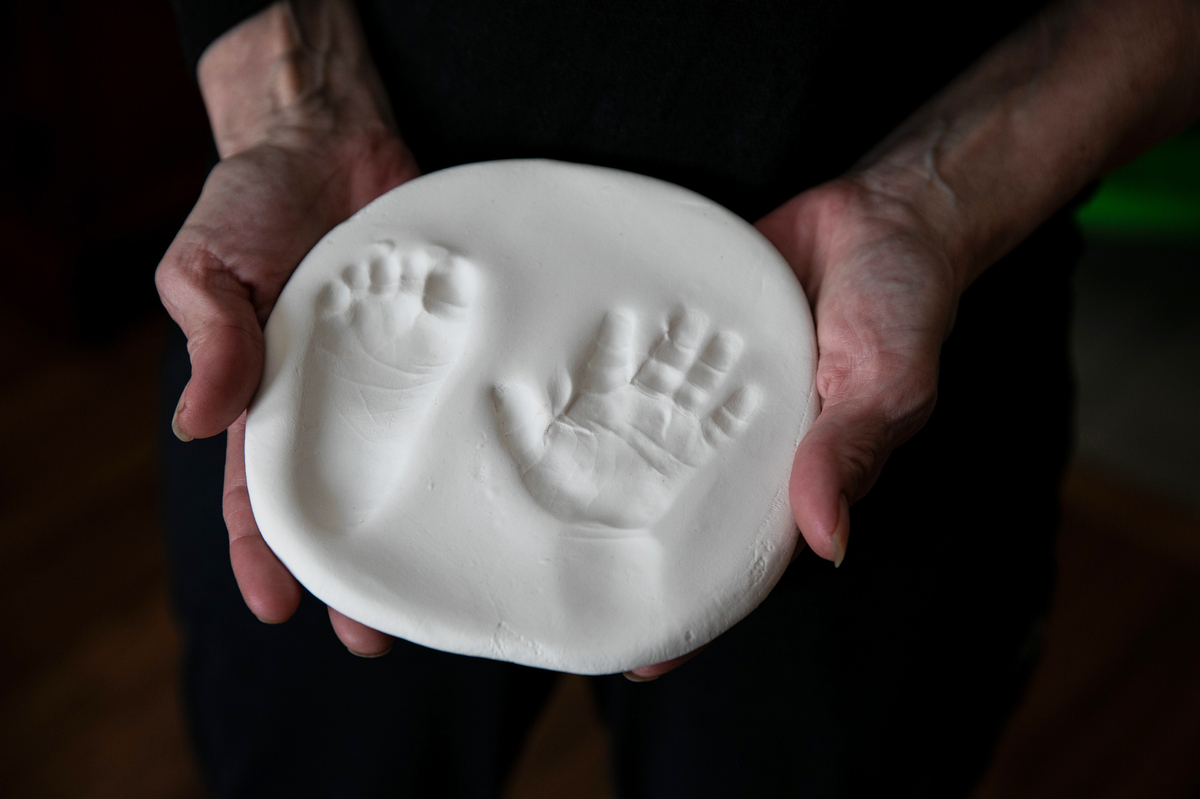 Barbara holds an imprint of her grandson Alijah's hand and foot that she was given after he died. Jessica, the baby's aunt, called 911 when he was found limp. The operator failed to recognize that the baby was in cardiac arrest, meaning that his heart had stopped and he was not breathing, according to three emergency medical experts who reviewed a recording of the 911 call.

This story is part of a collaboration between The Public's Radio and the ProPublica Local Reporting Network.

Conner had just gotten out of the shower and gone back downstairs to where his infant son was napping. Barbara heard Conner scream and ran up the stairs of her home in Warwick, R.I.

Conner handed her 6-month-old Alijah, who was limp.

Barbara tried to stay calm as she carried her grandson into the living room. She'd watched medical shows on TV where they did CPR on babies.

"He's turning purple!" Barbara shouted as her daughter, Jessica, spoke to a 911 operator. (We're not using last names at the family's request to protect their privacy.)

"Do we give him mouth-to-mouth? What do we do?" Jessica, the baby's aunt, asked the 911 operator at one point.

She never got a good answer.

The 911 operator — whom officials refused to identify — asked the same questions repeatedly, wasting crucial time. She gave incorrect information. And she failed to recognize that the baby was in cardiac arrest, meaning that his heart had stopped and he was not breathing, according to three emergency medical experts who reviewed a recording of the 911 call obtained by Barbara and provided to The Public's Radio.

The call on that Friday morning in February 2018 lasted nearly four minutes, at which point emergency medical services personnel arrived. During the call, the 911 operator never instructed the family in how to perform a basic, potentially lifesaving treatment: cardiopulmonary resuscitation, or CPR.

By the time the baby arrived at the hospital, it was too late. Alijah was dead.

"I've listened to thousands of calls," said Dr. Jeff J. Clawson, medical director for the International Academies of Emergency Dispatch, a nonprofit in Salt Lake City. "I would say that this particular call is in the top 15 worst calls I've ever heard in my life, maybe in the top 10."

When it comes to out-of-hospital cardiac arrests such as this one, among the most serious calls the 911 emergency system handles, Rhode Island seems set up to fail, experts in emergency medical dispatch say.

The American Heart Association says that providing CPR instructions over the phone for emergency 911 calls involving cardiac arrest is the standard of care. Knowing how to perform CPR in person, experts say, is very different from instructing someone to do it by phone, akin to the difference between knowing how to tie your shoes and trying to explain it by phone to someone who has never done it before.

But there are no national training requirements for 911 call-takers. And the United States is a patchwork of different systems where performance varies widely.

On average, about one in 10 people in the U.S. who go into cardiac arrest outside a hospital survives. But even in a small state like Rhode Island, experts say, the survival rate could double or triple with earlier CPR — potentially saving hundreds of more lives a year.

The benefits are well documented. Seattle launched its program in the 1980s. "They saw very quickly that they were literally snatching lives from the jaws of death among patients who had cardiac arrest in their homes and in the community," said Dr. Mickey Eisenberg, medical director of King County Emergency Medical Services.

At the urging of groups like the American Heart Association, Louisiana, Wisconsin and Kentucky passed laws last year requiring 911 call-takers and other emergency dispatchers to be trained in telephone CPR.

For the roughly half of Americans who don't know CPR, as well as others who are reluctant to perform it, the guidance they receive from a 911 operator can be crucial.

Rhode Island public safety officials have defended the way their system is set up, pointing out that call-takers are certified in CPR and basic first aid. A spokeswoman for the Rhode Island Department of Public Safety said in an email that officials were prohibited from discussing specifics of the 911 call involving Alijah, citing state confidentiality laws. The agency also declined to answer questions about the call-taker, who was not identified in the recording.

The final autopsy report, which Barbara shared with The Public's Radio, said the baby had been propped on his left side with a bottle in his bassinet. "He was later found unresponsive on his back."

The report states the cause of death as "sudden unexplained infant death."

Doctors who reviewed the 911 call, Alijah's autopsy report and a patient care report prepared by the local fire department said it's impossible to know whether Alijah would have survived with earlier intervention.

Throughout the investigation of Alijah's death, the baby's aunt, Jessica, said nobody asked them about the emergency response to their 911 call or told them it had been mishandled.

"I mean, there were a million other questions," Jessica said. "But no one ever said, 'You know, what was the 911 call like? Did they give you clear instructions?' "

Barbara shook her head. "Not once," she said. "None of them."

Since the full version of this story was published last month, the head of the Rhode Island State Police has pledged to conduct a thorough review of procedures and training provided to 911 call-takers.

Lynn Arditi is a health reporter for The Public's Radio in Providence, Rhode Island. Email her at larditi@thepublicsradio.org, and follow her on Twitter: @LynnArditi.