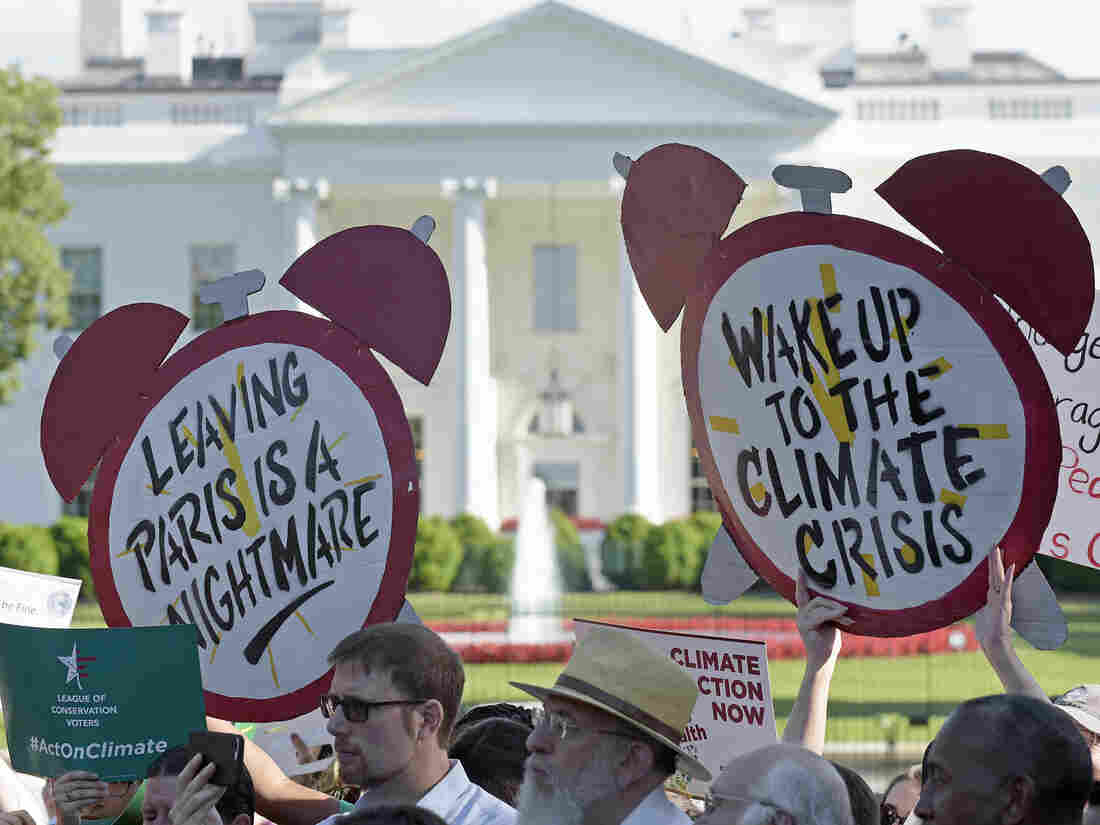 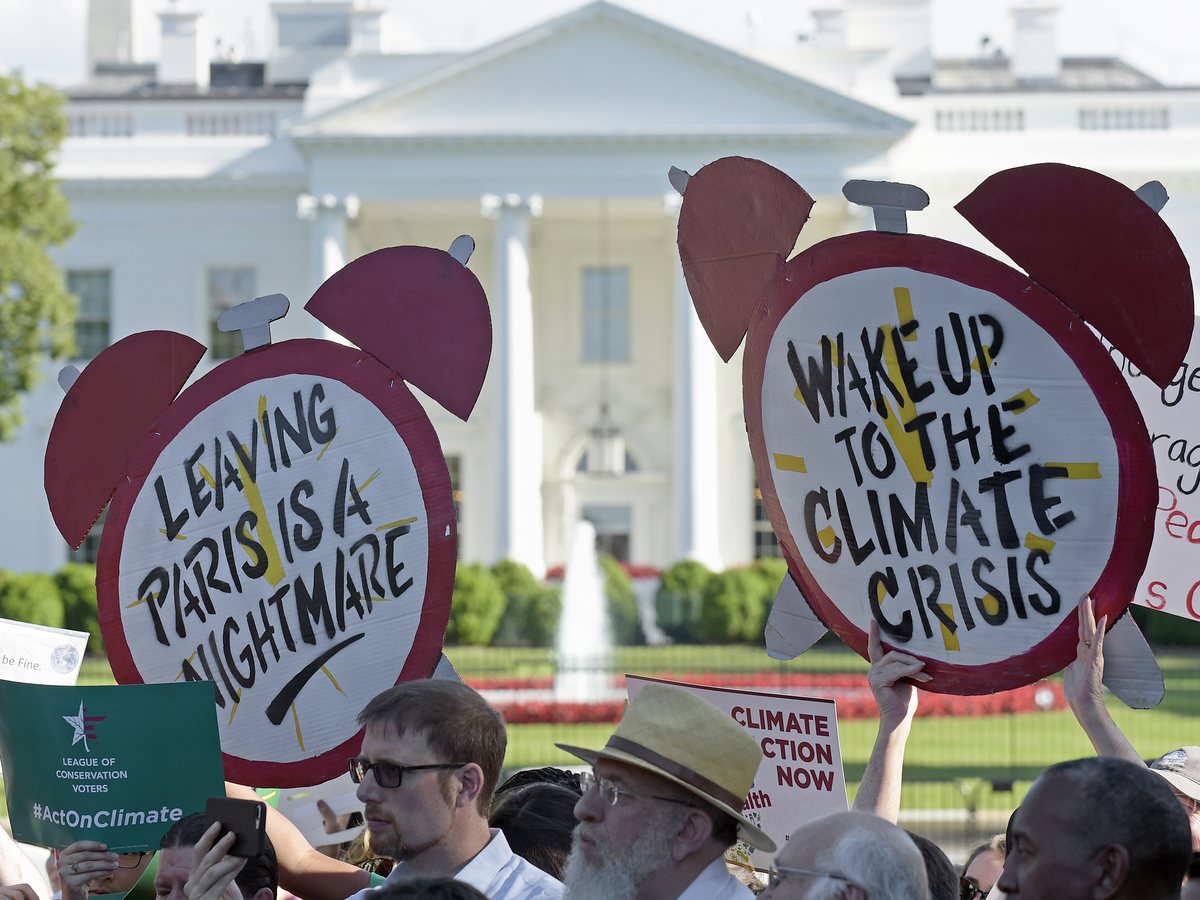 Protesters gather outside the White House June 1, 2017, to protest President Trump's decision to withdraw the Unites States from the Paris climate change accord.

Climate change is often thought of as a partisan issue in the United States, but New York Times journalist Nathaniel Rich says that wasn't always the case.

Rich says that from 1979 until 1989, climate change was viewed as a bipartisan problem — then the the oil industry "descended and bared its fangs" and everything changed.

In his new book, Losing Earth, Rich writes that in the late 1980s, the American Petroleum Institute began paying scientists to write op-eds questioning climate science. He describes the effort as a campaign to "sow propaganda [and] disinformation, to buy off politicians and scientists, and, ultimately, to convert an entire political party to denialism."

Rich says the campaign paid off. No longer was climate science accepted as fact: "All of a sudden," he says, "you have a number of pieces that start to appear that say maybe there's not scientific consensus about this problem."

As a result, the Republican party began to shift its stance on climate change: "It's become a starkly partisan issue," Rich says. "And it seems like we are much further from a solution than we were 30 years ago."

The industry has been following this issue for a long time. There are studies from Exxon or even Humble Oil, the predecessor to Exxon, going back into the mid-1950s and even then, those studies were not about whether or not this was happening. The question was how much of the added CO2 in the atmosphere was because of Exxon — basically because of the fossil fuel industry. They continued to monitor this over the decades.

The head of the API program told me they gave $2,000 to a scientist whenever he wrote an op-ed for a national publication. That is almost an afterthought at the time. It's pretty low on the totem pole of what they're doing. They're also meeting with Congressmen and so on. But it pays enormous dividends, because all of a sudden national news publications start quoting these scientists — it's really a handful of people, four or five people — over and over again. And an issue that, at this point, has been a story about fear of what's going to happen, all of a sudden has two sides.

We've entered this weird funhouse realm where now if you jump ahead to the present day you have a political party ... that endorses a position that's essentially to the right even of what the industry now says in their public statements. Exxon publicly today doesn't deny climate change, but you have a party that does. I think it's something that future historians will spend a lot of time piecing out is: How this little lie grew into a big lie and overwhelmed our politics. 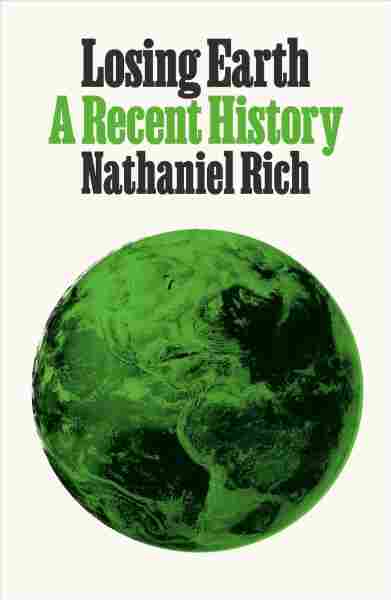 On a major turning point that occurred in 1989 when George H.W. Bush declined to sign a United Nations treaty addressing climate change

From '79 to '89 there are a series of escalating efforts to first bring the issue to the attention of the powers that be — people at the highest levels of the federal government — and then to bring it into the public to generate public concern. And finally, in the middle of the decade, a solution materializes which is a global treaty to reduce emissions that would be binding, and it's modeled after the ozone treaty, that's then in process.

By the end of the decade we've reached the point of high level diplomatic meetings to negotiate this binding global treaty. We get to the precipice of an agreement on the framework of this treaty, and at the very last second the U.S. pulls out. ... At least on paper that's the closest we've come.

I think you could have a reasonable debate about whether or not if the U.S. did sign the treaty we would've lived up to the terms of it, whether other countries would have lived up to the terms of it even if it was binding. And that's a more complicated conversation to have. I think at the very least we'd be a lot further ahead than we are now. That seems indisputable.

On what the Trump administration has done to undermine environmental protections

[Trump's] trying to roll back just about every policy that President Obama introduced, trying to roll back clean air standards, emissions from coal factories, mileage standards, CAFE standards they're called. You name it — an all-out assault, and not just on climate, but on any kind of environmental protection, I should say. I guess the only silver lining is that [with] something like the Paris Accord, he can he can withdraw, but the formal withdrawal doesn't happen for a couple of years, and even then the treaty is voluntary to begin with, so it's more of a political statement than anything else.

Rolling back emission standards is probably at the top of the list of the bad things that are going on. But I think more destructive is just this peddling of this fantasy, and it's connected to a lot of other stuff you see in the administration: a basic affront on objective reality. You see that extends beyond the climate conversation and into, the conversation we're having about news and reporting and historical fact and all the rest.

Climate change victimizes the victimized. It oppresses the oppressed. ... It cuts along class lines, racial lines, generational lines and socioeconomic lines. So the worse off you are, the more marginalized you are, the worse you're going to suffer from what's coming.

It's a statement of principles. Primarily it's not a law. It's not a bill. ... In some of the particulars, it's less ambitious than bills that were proposed and introduced into Congress at the end of the '80s by both Republicans and Democrats. I think what distinguishes it — and what makes it a truly transformational document — is that it identifies the climate crisis as connected to every form, essentially, of social injustice that we have. I think that's the only honest way of looking at it.

Climate change victimizes the victimized. It oppresses the oppressed. ... It cuts along class lines, racial lines, generational lines and socioeconomic lines. So the worse off you are, the more marginalized you are, the worse you're going to suffer from what's coming.

So [the Green New Deal is] extremely valuable in that it says that climate change is not just one item on this sort of menu of political items, but it's the one that encompasses them all. You can't have social justice if there's not climate justice. You can't have a civil society, a stable society, if you don't have a stable climate.

I think that's a profound argument and an honest one. It puts it into moral terms in a way that is new in Washington, and I think that is enormously valuable. You can get into the debate about how best to achieve certain goals — and those are important policy debates to have — but it's reframed the issue dramatically and I think critically.

On how to motivate Americans to care about climate change

This has been a big debate, particularly within the activist community, for a while now. It's essentially a marketing question: How do we get people to care about this problem and prioritize it? Is fear the best approach? Is hope? Inspiring people? I think that the trend has been towards the latter more.

... We think of it almost in, like, Hollywood terms, like either we're going to win this thing, or we're going to suffer a crushing defeat. But, of course, there's a huge range of outcomes in between, and at this point where we're at — ranging from the not very good to the apocalyptic — but that doesn't mean that we shouldn't try to better our situation as much as possible.

Sam Briger and Seth Kelley produced and edited the audio of this interview. Bridget Bentz and Molly Seavy-Nesper adapted it for the Web.