Accessibility links
Eric Swalwell Running For President; Expected To Focus on Guns The 38-year-old congressman upended the party establishment by defeating a 40-year incumbent to win his House seat in 2012. Swalwell is the 18th Democratic candidate for president.

California Rep. Eric Swalwell Is Running For President, Too, With A Focus on Guns

California Rep. Eric Swalwell Is Running For President, Too, With A Focus on Guns 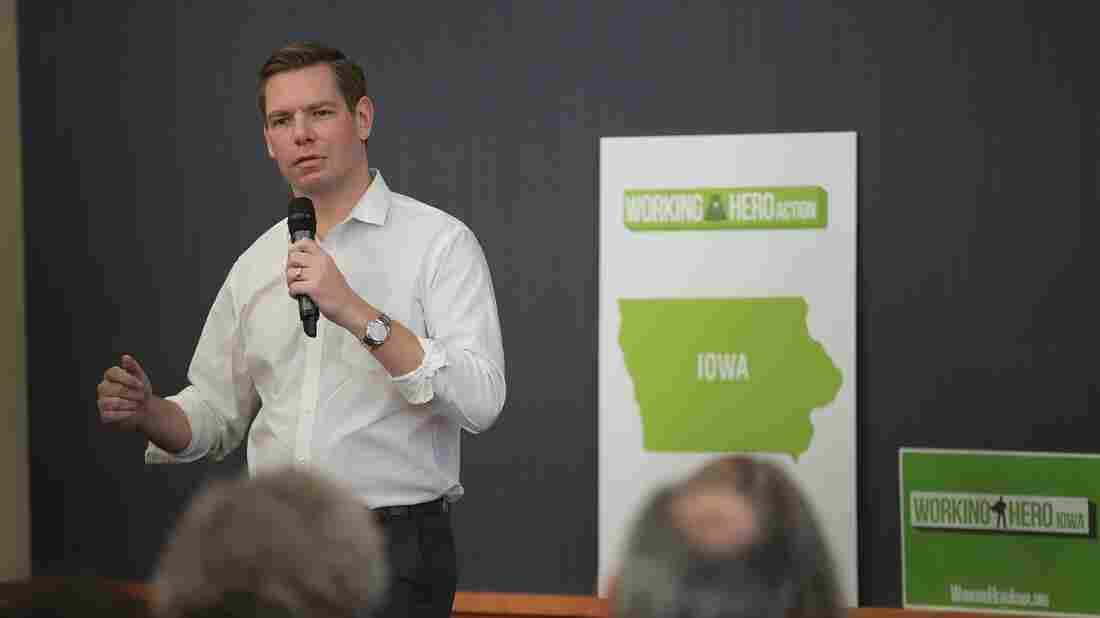 Rep. Eric Swalwell, D-Calif., speaks to a group in Iowa City, Iowa, in February. Swalwell, who became the latest Democrat to run for president, was born in Iowa but grew up in California. Scott Olson/Getty Images hide caption 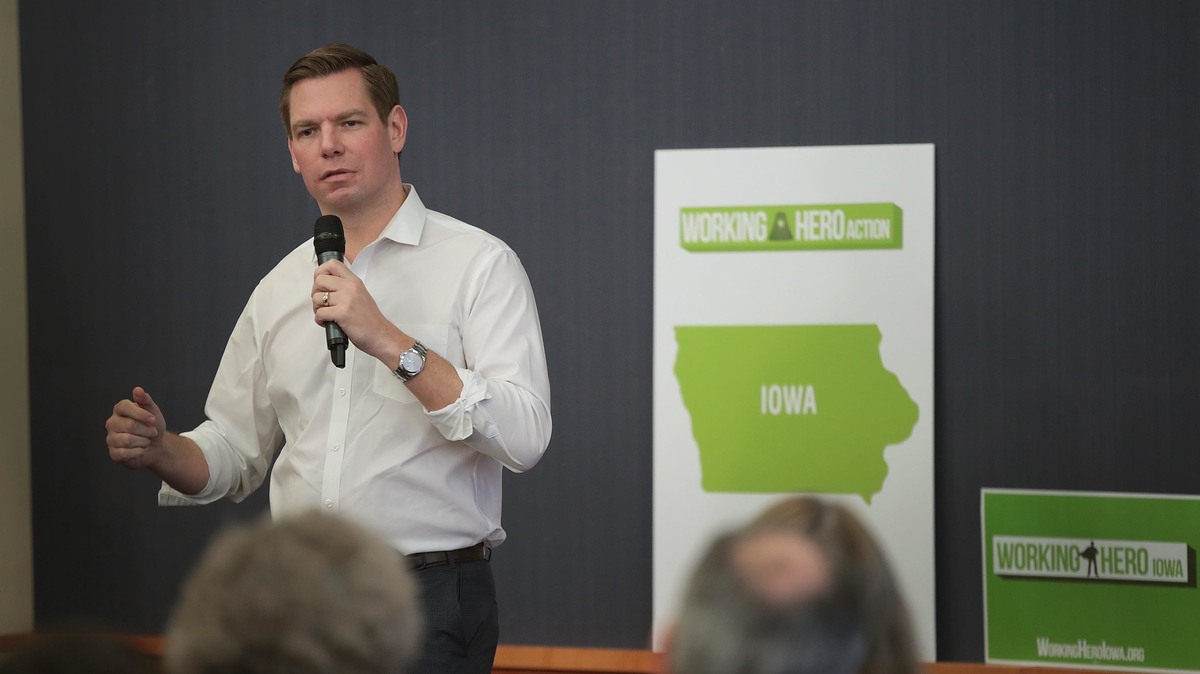 Rep. Eric Swalwell, D-Calif., speaks to a group in Iowa City, Iowa, in February. Swalwell, who became the latest Democrat to run for president, was born in Iowa but grew up in California.

California Rep. Eric Swalwell is the latest Democrat to jump into the race for president.

"I see a country in quicksand, unable to solve problems and threats from abroad, unable to make life better for people here at home. Nothing gets done," Swalwell said in an appearance on The Late Show with Stephen Colbert Monday night.

After walking through a list of issues from foreign threats to student loan debt to gun violence, he added, "None of that is going to change until we get a leader who is willing to go big on thee issues we take on, be bold in the solutions we offer and do good in the way that we govern. I'm ready to solve these problems. I'm running for president of the United States."

Swalwell is the 18th Democrat to join the race for the party's 2020 presidential nomination.

TONIGHT: California Representative @EricSwalwell announces on @colbertlateshow that he is running for President! #LSSC pic.twitter.com/bvzBPIkSnz

One of the key issues the California Democrat, 38, is highlighting is one important to young voters in particular: gun safety. He's hosting a town hall Tuesday on the subject at the BB&T Center in Sunrise, Fla., only 13 miles from Marjory Stoneman Douglas High School in Parkland, Fla., the scene of the 2018 massacre that killed 17 people. The BB&T Center, where the Florida Panthers ice hockey team plays, is an arena with capacity seating of more than 20,000.

That Parkland shooting has led to mass demonstrations and activism from not just survivors of the shooting but many other young people across the country. In fact, helping to organize the town hall was Cameron Kasky, a Parkland survivor, who was Swalwell's guest for the State of the Union address.

Swalwell has also taken on the National Rifle Association, proposing an assault-weapons ban. The NRA put Swalwell on the cover of its January magazine, which Swalwell embraced, saying he is "living in the NRA's head."

Living in the @NRA’s head & on the cover of their magazine! But they mischaracterized my position. My plan to ban assault weapons is not “hollow.” It’s very real & the public is with me.

Swalwell got put on that cover after landing in controversy a couple months earlier because of a reply to a Twitter user. The user said Swalwell "wants a war" over gun rights and that he's out of his mind "if you think I'll give up my rights and give the gov[ernment] all the power."

To which Swalwell said, "it would be a short war my friend. The government has nukes."

And it would be a short war my friend. The government has nukes. Too many of them. But they’re legit. I’m sure if we talked we could find common ground to protect our families and communities.

"The Snapchat king of Congress"

It would make some sense that Swalwell announce in a pop-culture setting, given that he was appointed as the director of youth outreach for the House Democratic caucus by House Democratic leader Nancy Pelosi in 2015.

Swalwell, who was born in Iowa but grew up in California, is less known than some other Democrats running for president. But he has been a fixture on cable news during the Mueller probe into Russian interference in the 2016 election and alleged collusion with the Trump campaign.

Swalwell is used to being the underdog. He won his seat to Congress in 2012 when he was only 31. The former deputy district attorney from the East Bay are of California, near San Francisco, ousted a 40-year incumbent Democrat, Pete Stark.

That rankled the party establishment, but he quickly made nice with Pelosi, a fellow Bay Area congresswoman – and powerful leader on Capitol Hill.

Instead of making an enemy of Swalwell, Pelosi, who has faced criticism that the party needs younger leadership, embraced him. Swalwell became known as the "Snapchat king of Congress."

"I realized that so many of our constituents were on Snapchat," Swalwell told The Hill in 2016. "It wasn't just young people, but their parents had figured out that's where their kids are."

Swalwell has been married to Brittany Watts since 2016. He was married once before, but it ended in divorce.