Accessibility links
Book Review: 'Trust Exercise,' By Susan Choi Susan Choi's new novel is set at a performing arts high school in the 1980s, as students navigate the line between adolescence and adulthood, student-teacher relationships and the drama of first love.

Teen Years Echo Through A Lifetime In 'Trust Exercise'

Teen Years Echo Through A Lifetime In 'Trust Exercise' 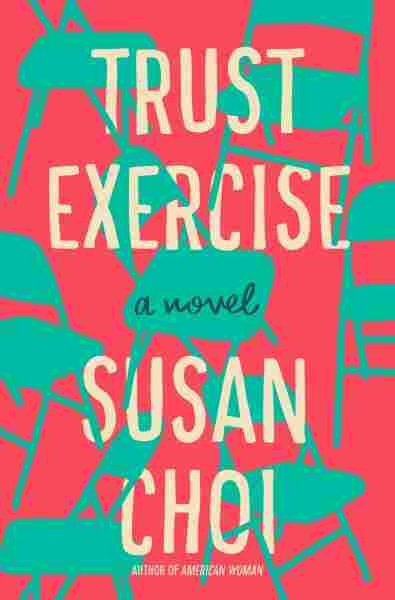 Book groups, meet your next selection. Trust Exercise, Susan Choi's powerful fifth novel, will give you plenty to talk about. At 257 pages, it's not a major time commitment, but be warned that it is impossible to discuss this book meaningfully if everyone hasn't read the whole thing. It's also tricky to review, as it derives so much of its impact from audacious narrative twists that I don't want to risk spoiling.

What I can say is that the book's title, echoed in its three section headings, tips us off that this entire novel is a trust exercise. Of course, when you think about it, so is all literature: While more fantastical stories require a willing suspension of disbelief, realist narratives, whether fiction or nonfiction, raise questions like, Who's telling the story? How reliable is their account? Should we believe it?

Trust Exercise shares several preoccupations with Choi's last novel, My Education (2013). Once again, she hovers over the murky line between adolescence and adulthood; the intensity, drama, anguish, and obsessional nature of first love; and the dynamics of student-teacher relationships, both formative and deformative.

Both books are campus novels. My Education is set in graduate school, while Trust Exercise focuses on a group of 15- and 16-year-olds who attend an elite high school for the performing arts in a small, unnamed southern city in the early 1980s. These teens are having sex and driving cars, but their emotional maturity lags well behind their physical development.

In Art Lost And Found, The Echoes Of A Century's Upheaval

Choi is an extraordinarily patient writer, slowly building her novel sentence by careful sentence, as if layering coats of paint until she achieves the desired intensity of hue. Her descriptions of what it's like to be a high-strung, artsy teenager in an environment where you're emotionally stripped, exposed and on constant display are uncomfortably astute. Like Meg Wolitzer's The Interestings, Trust Exercise digs into the nitty-gritty of adolescents' social machinations and the bitter aftertaste of their disappointments, and shows how these years reverberate across a lifetime.

In a particularly elegiac passage, Choi writes, "Remember the impossible eventfulness of time, transformation and emotion packed like gunpowder into the barrel. Remember the dilation and diffusion, the years within days. Theirs were endless; lives flowered and died between waking and noon."

Reader: Remember that gunpowder image. Like Chekhov's proverbial gun on the mantel, it's bound to go off, at least metaphorically.

I know plenty of people who look back on college nostalgically, but I don't know many adults who would happily return to high school — which could be a problem. Trust Exercise evokes a complicated, miserable high school experience so vividly and intricately that it's liable to try readers' patience and turn them off early. And that would be a pity.

Choi's book isn't long, but its first half, the set-up for all that follows, feels long. Her construction, with its bottom-heavy foundation, raises issues about how long you want to hang around in a basement before ascending to floors with a better view — but it's worth hanging in there for her payoff, which is certain to cast what preceded it in new light. That said, I want to point out that Lisa Halliday, in contrast, managed to make all three sections of her clever novel Asymmetry equally compelling even on your first readthrough.

'Trust Exercise' is fiction that contains multiple truths and lies. Working with such common material, Choi has produced something uncommonly thought-provoking.

Which isn't to say there aren't pleasures aplenty right off the bat in Choi's laminated prose. She writes of "the excruciating in-betweenness of no longer being children, yet lacking those powers enjoyed by adults." One character sees her "lonely, unloved competence" reflected in a lowly stage prop, a plastic sewing kit. Then there's the Svengali-like teacher, a man who "slid into the room like a knife" with "a noiseless and ambushing style of movement," who insists his students spell theater the British way, ending in "re."

There are all sorts of resonant observations that bear on the reliability of narratives, even when they involve events experienced first-hand: "We never know, when life reunites us with someone, how closely our stories will match," Choi writes. (The same can be said of siblings who grew up in the same household yet have starkly different memories of it.)

Notions of truth become complicated in an environment where students are being taught to dissemble. Acting, they learn, is "fidelity to authentic emotion, under imagined circumstances." Literary fiction plays similar games, leading one character to argue, "The whole thing about fiction not being the truth is a lie."

Trust Exercise is fiction that contains multiple truths and lies. Working with such common material, Choi has produced something uncommonly thought-provoking. Trust me.