Accessibility links
Supreme Court Limits Asset Forfeiture, But Defining 'Excessive' Is Tricky The Supreme Court ruled that seizing a $42,000 Land Rover was an "excessive fine" in a recent landmark decision on civil asset forfeiture. Future rulings will have to further define that term. 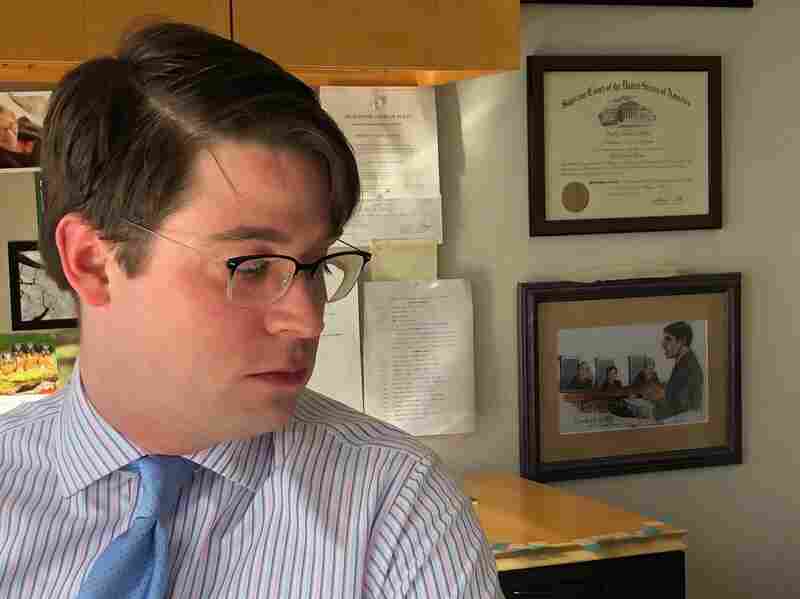 Institute for Justice lawyer Wesley Hottot in his Seattle office. On the wall is a framed illustration of him arguing Timbs v. Indiana at the Supreme Court last fall. Martin Kaste/NPR hide caption 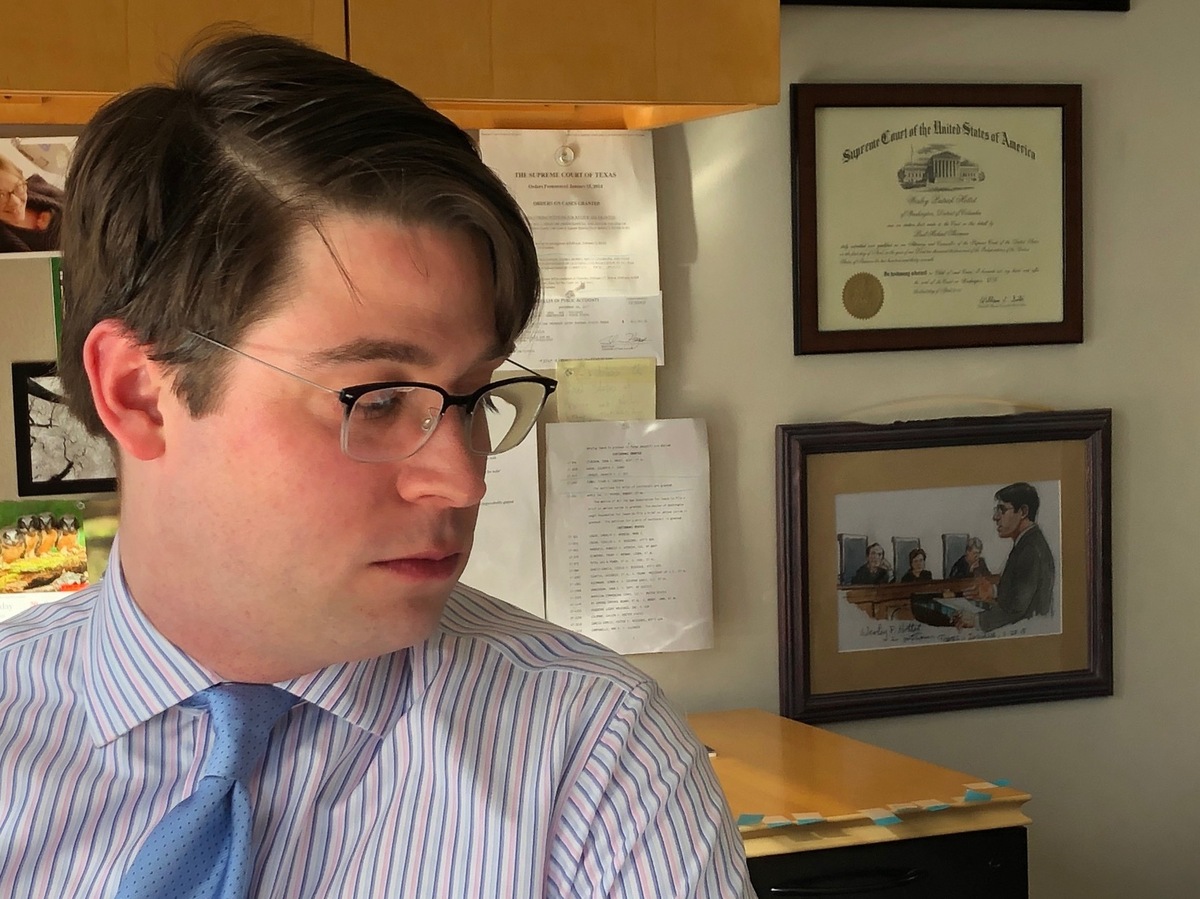 Institute for Justice lawyer Wesley Hottot in his Seattle office. On the wall is a framed illustration of him arguing Timbs v. Indiana at the Supreme Court last fall.

Tyson Timbs won his Supreme Court case in February, but he still doesn't have his Land Rover.

"I want my truck back. I've always wanted it back," says Timbs, whose Land Rover was seized by police in Indiana. They took it after he was arrested for selling a small amount of heroin to undercover cops. He served a period of house arrest and probation for the drug crime — punishments he accepted.

But Timbs never accepted that police were entitled to his $42,000 vehicle, which he'd bought with proceeds from an insurance settlement.

"I thought it was kind of ridiculous that they could take my vehicle so easily," he says.

And yet this kind of confiscation is common. Called "civil asset forfeiture," it was developed as a law enforcement tactic in the drug war of the 1980s. Authorities use the lower standard of proof of civil law to take property — usually cars or cash — based on the suspicion it's associated with crime. In Timbs' case, police suspected he'd used the Land Rover to transport heroin. Since the tactic was developed, billions of dollars in assets have been seized this way.

The technique attracts the ire of activists on the left and right, and occasionally it bursts into public view after especially egregious seizures.

One of the most visible opponents of civil asset forfeiture is a libertarian-leaning nonprofit called the Institute for Justice. It has argued for years that the billions of dollars in forfeited property amounts to a system of "Policing for Profit." They took on Timbs' case, arguing that the seizure of the truck constituted an "excessive fine," in violation of the Eighth Amendment of the U.S. Constitution.

If we look at these forfeitures that are occurring today, many of them seem grossly disproportionate to the crimes being charged.

During arguments last October, the justices seemed to agree that something is out of whack with forfeitures.

"If we look at these forfeitures that are occurring today," Justice Sonia Sotomayor said, "many of them seem grossly disproportionate to the crimes being charged."

In February, the court ruled unanimously in Timbs' favor. But the victory was a narrow one.

What constitutes an "excessive fine?"

"It's a landmark ruling because it made clear that the states have to comply with the excessive fines clause" of the Bill of Rights, says Wesley Hottot, the Institute for Justice lawyer who argued the case. But what's still undetermined is what constitutes an "excessive fine."

[T]here's no meat on the bones! And the meat will be when the Supreme Court defines what 'excessive' is. We're just not there yet.

"I do think it will result in a case-by-case development of where the line is," Hottot says. "How much property can the government take from a person in connection with a crime? Can they take your car? Maybe. Can they take your cash? Maybe. ... We don't know the answers to those important questions yet."

Lisa Soronen is executive director of the State and Local Legal Center, which took Indiana's side in the case. She also believes the Timbs case is just the beginning of a longer process — she says it's a legal "skeleton."

"But there's no meat on the bones! And the meat will be when the Supreme Court defines what 'excessive' is," Soronen says. "We're just not there yet."

Others think Timbs may have a quicker effect. In Georgia, a lawyer named Matt Cavedon says it strengthened his hand when he challenged the county's seizure of his client's moped. Police took it when his client was caught riding it while in possession of a couple of grams of meth.

"This was actually his main mode of transportation," Cavedon says.

Cavedon was negotiating with the prosecutor for the return of the moped around the time the Timbs case was decided. "Being able to bring in a part of the Bill of Rights, and say that prohibited this seizure — that mattered a lot," he says.

Hall County Assistant District Attorney Wanda Vance denies the Timbs case made a difference. She says she gave the moped back mostly because it simply wasn't worth her time.

"I personally had spent as a prosecutor days working on this one asset forfeiture," Vance says. "So it just got to be to where we made kind of the decision that it just wasn't in the interest of justice anymore for us to continue."

Abandoning property to the state

That's an important factor. When someone contests a civil asset forfeiture, it costs time and money, for the prosecution, but also for the property owner. Because it's a civil case, no one is entitled to free legal representation, so challenging a forfeiture can quickly cost more in lawyer fees than the property is worth. In the moped case, Cavedon took the case pro bono, because he's an alumnus of the Institute for Justice's campaign against civil asset forfeiture.

That financial barrier means people often abandon their property to the state, rather than challenge a forfeiture. And, says Seattle attorney Hottot, that slows down the process of letting the courts determine what the protection against "excessive fines" really means.

"It's hard for the law to develop in a way that favors property owners when the amount in controversy is so much less than what it costs to litigate," Hottot says. "The more societally efficient remedy here is for lawmakers to fix this."

A few legislatures have acted. New Mexico eliminated civil asset forfeiture, requiring the state to get a criminal conviction before claiming property.

In Minnesota, legislators of both parties are pushing for restrictions on what the state terms "administrative asset forfeiture," and they say their effort got "moral support" from the Supreme Court's unanimous Timbs ruling.

A needed tool in fighting crime

Law enforcement groups are worried about the shifting political climate on this issue.

"Our goal is to put a pause" on this legislation, says Dakota County Sheriff Tim Leslie. He says there's a mushrooming meth trade in his part of Minnesota, and he needs asset forfeiture to disrupt the crime networks by seizing property, even when the culprits can't be found for prosecution.

"Why are we moving toward less tools in the toolbox?" he asks. At the same time, he acknowledges the political pressure created by high-profile seizure cases such as Timbs.

"Those outrageous examples, we have to face those," he says. "But we just don't want the pendulum to swing too far. We want to still have some tools for the outrageous things that we see going on" in drug trafficking networks.