Accessibility links
Trump Relies On Record Number Of Acting Positions Kirstjen Nielsen's departure from the Department of Homeland Security means that 15 of President Trump's Cabinet-level appointments have departed, a number far higher than in previous administrations. 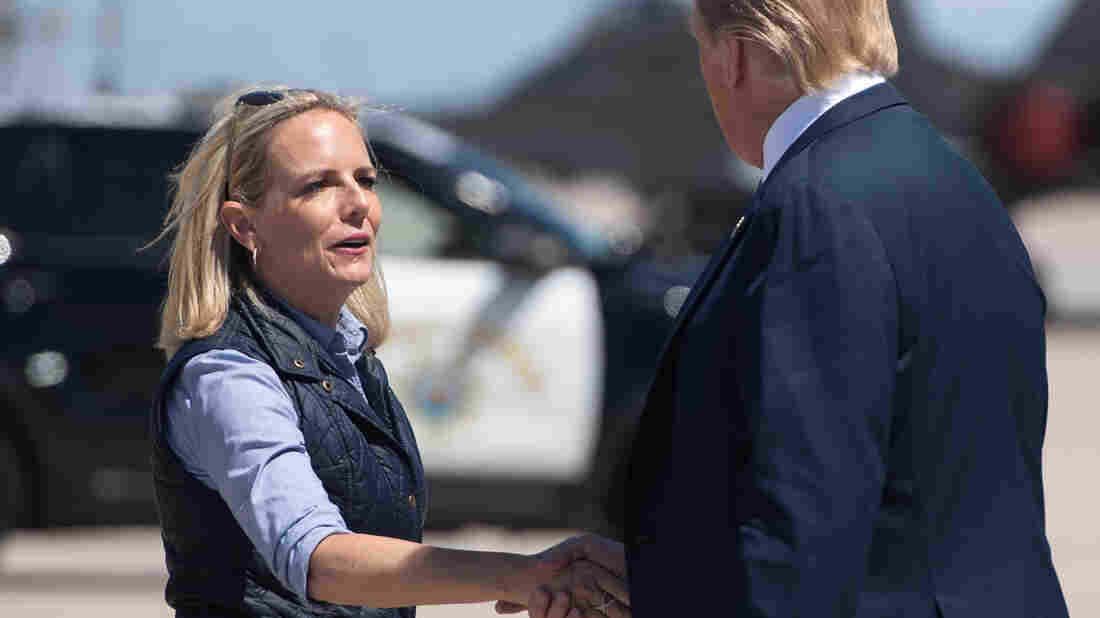 Secretary of Homeland Security Kirstjen Nielsen shakes hands with President Trump in El Centro, Calif., on April 5 after he arrived to visit the border wall between the United States and Mexico. Saul Loeb/AFP/Getty Images hide caption 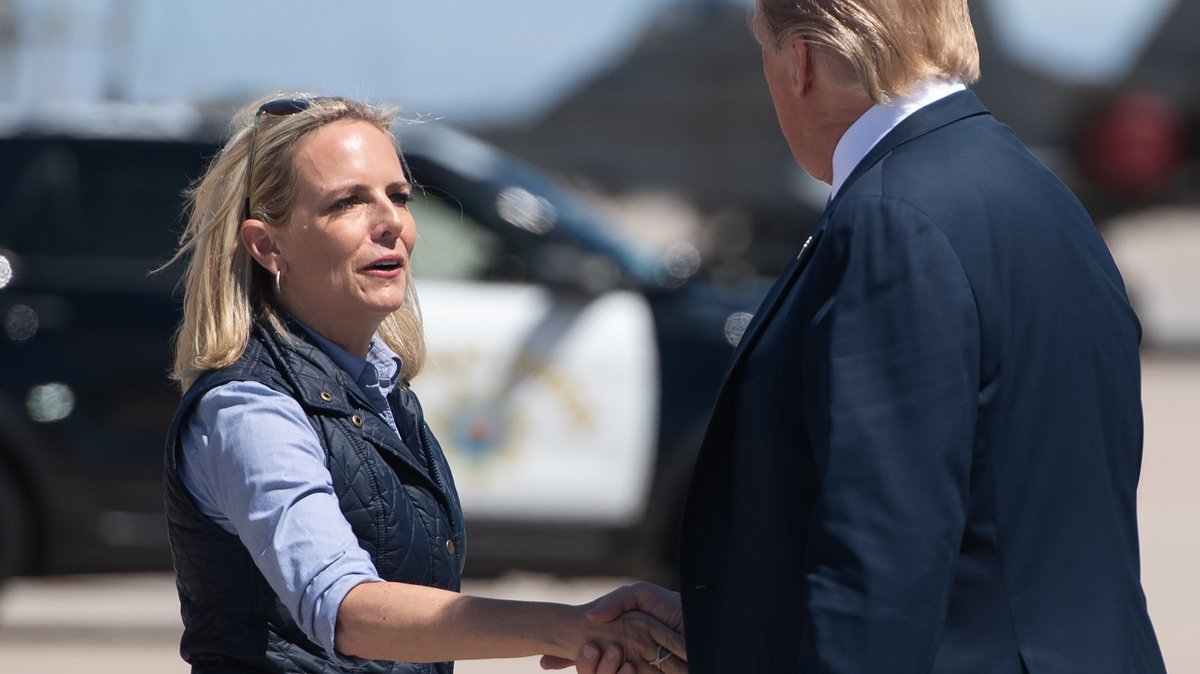 Secretary of Homeland Security Kirstjen Nielsen shakes hands with President Trump in El Centro, Calif., on April 5 after he arrived to visit the border wall between the United States and Mexico.

Secretary of Homeland Security Kirstjen Nielsen's resignation may have come as a surprise, but it's part of a pattern for the Trump administration. Replacing Cabinet secretaries has become a feature, not a bug, of this White House.

And it means that after Nielsen leaves her post later this week, three of the president's Cabinet members will be serving in an acting capacity.

Trump sees an advantage in their status.

"I like 'acting' because I can move so quickly," he told CBS' Face The Nation in February, adding, "It gives me more flexibility."

The lack of permanence at the top of these departments means "we don't have established leaders in really important places in our government," says Max Stier, CEO of the Partnership for Public Service.

"They might be amazing educators or amazing leaders in their own right," Stier says, "but they're not set out for success. They're not going to be perceived as having complete and full authority by those that are around them."

And it's a crucial issue, he says, because "these are jobs that are fundamental to keeping us all safe."

Nielsen's departure means a total of 15 of Trump's Cabinet-level appointees have left in the first three years of the Trump administration, according to Kathryn Dunn Tenpas, a senior fellow at the Brookings Institution. (That includes White House chief of staff and ambassador to the U.N., two positions that are not considered Cabinet-level jobs by every administration.)

That compares with seven such departures in the first three years of the Obama administration and four for President George W. Bush.

Trump will be on his third secretary of homeland security in that period, which Tenpas says is "record breaking."

She says the high turnover in the Cabinet and among White House staff is "off the charts" and undermines the president's efforts to fulfill his campaign promises.

"In the private sector, corporations are all about how to retain their best people," she says. "You would think President Trump would have a proclivity" for such stability.

The reliance on acting officials is especially acute at the Department of Homeland Security, which lacks a permanent deputy secretary, as well as permanent heads of key agencies, including Immigration and Customs Enforcement and the Federal Emergency Management Agency.

It also amounts to an end-around of the Senate, which under the U.S. Constitution has a role to advise and consent to the president's appointments.

"It's not only the Senate that's voting on them. In some very real way, it's also a public vetting that's occurring when the Senate is performing this function," says Stier.

To have so many people in acting positions, he says, puts off that public review and vetting.