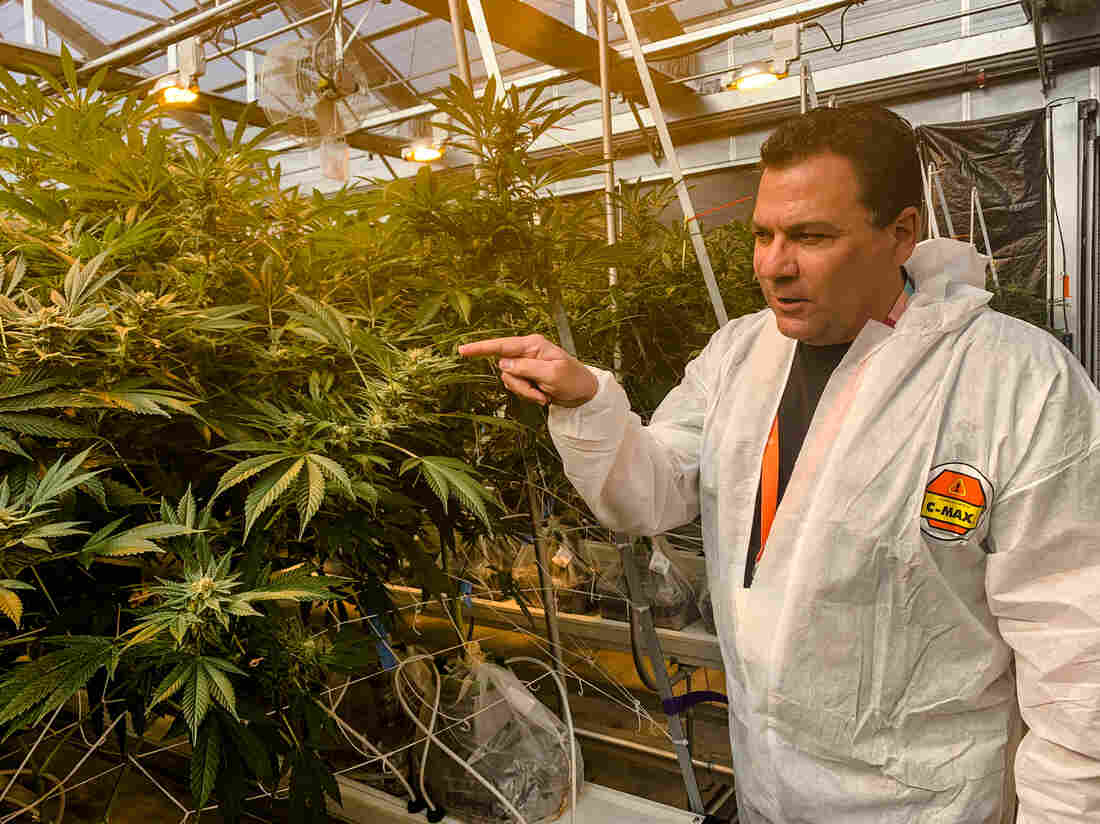 Tom DiGiovanni's job as chief financial officer for Canndescent involves managing bags of cash by the millions which must be counted, then hauled in armored vehicles. Devan Schwartz for NPR hide caption 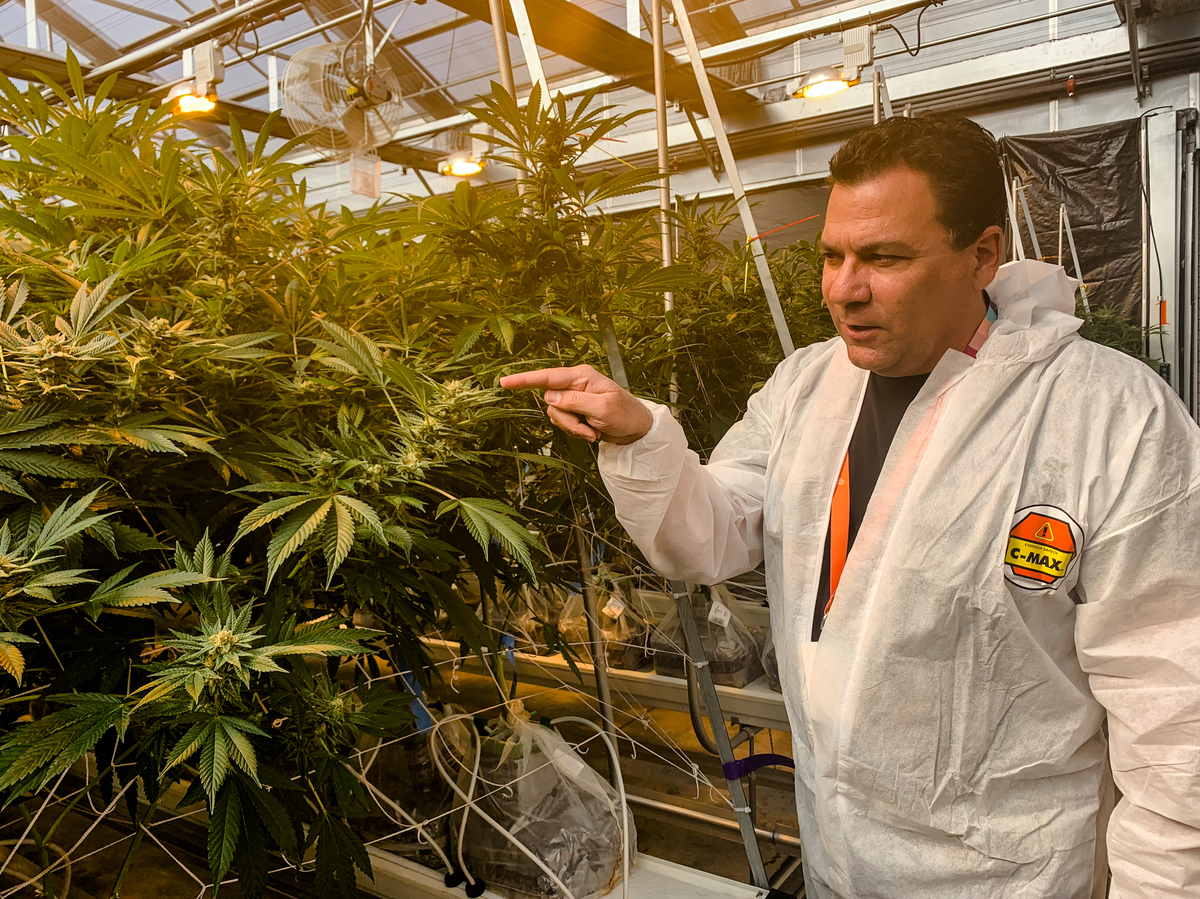 Tom DiGiovanni's job as chief financial officer for Canndescent involves managing bags of cash by the millions which must be counted, then hauled in armored vehicles.

Normally, a chief financial officer's job involves poring over balance sheets and bank statements. But in the pot business, the job still bears a lot of similarities to the illicit trade — transporting loads of cash under the watchful eye of big guys carrying lots of guns.

This chief financial officer and former Ernst & Young accountant leans into an unmarked armored van where there's a metal cage to protect the revenues for his company, Canndescent, from would-be thieves.

"Over the course of a month, we probably have $2 million in cash that's in some state of transit," he says. By the end of the year, that's expected to top $4 million, which will mean more armored vans and heavily armed guards.

"They have an ankle holster and another one in the small of their back and they're wearing tactical gear," DiGiovanni says. "It's pretty crazy."

DiGiovanni looks like he could be Ray Liotta's brother, with a nightclub bouncer's build. He says he likes living on the edge — at least businesswise. That's good, since aspects of his job feel more akin to gangster than pencil pusher.

Marijuana is legal medically or recreationally in 34 states, but it's still illegal under federal law. And though many businesses have entered that new gray market, the financial services industry has not. No major U.S. banks will open accounts for a company like Canndescent or its retail clients. 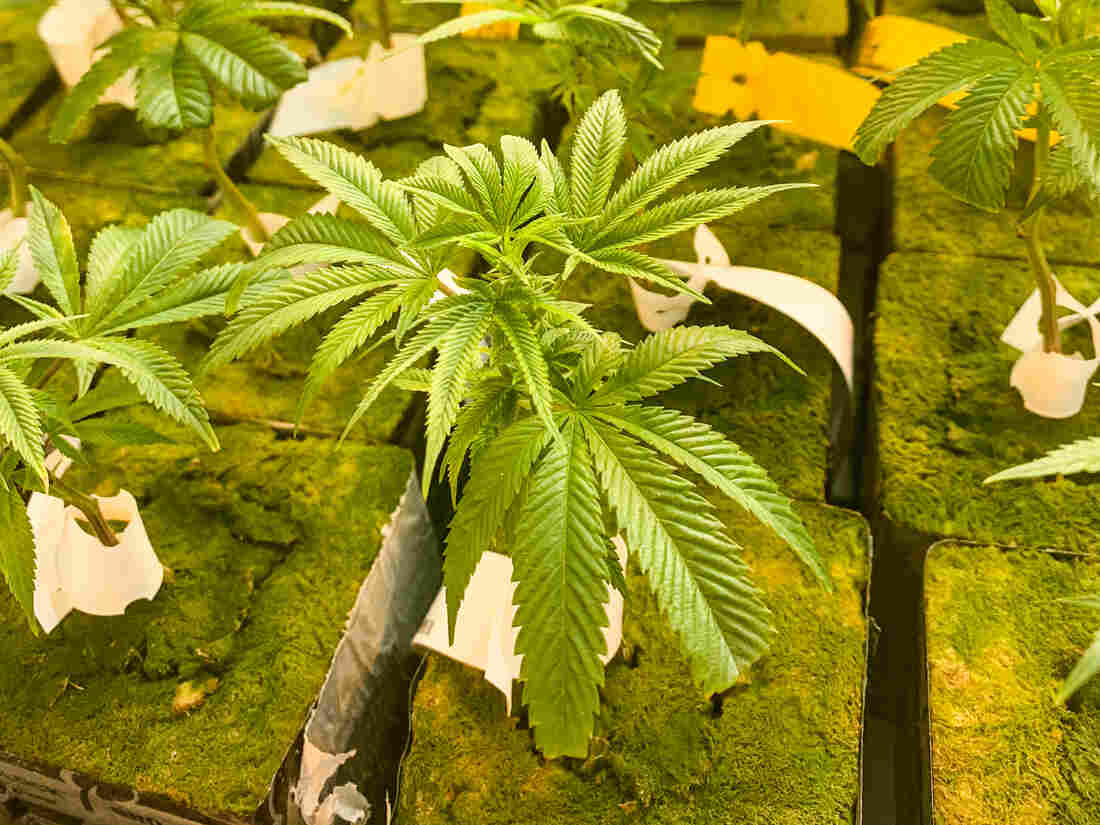 Banks won't lend to the cannabis industry, so much of the money Canndescent used to build its 27,000-square-foot grow house came from friends and family of the owner. Devan Schwartz for NPR hide caption 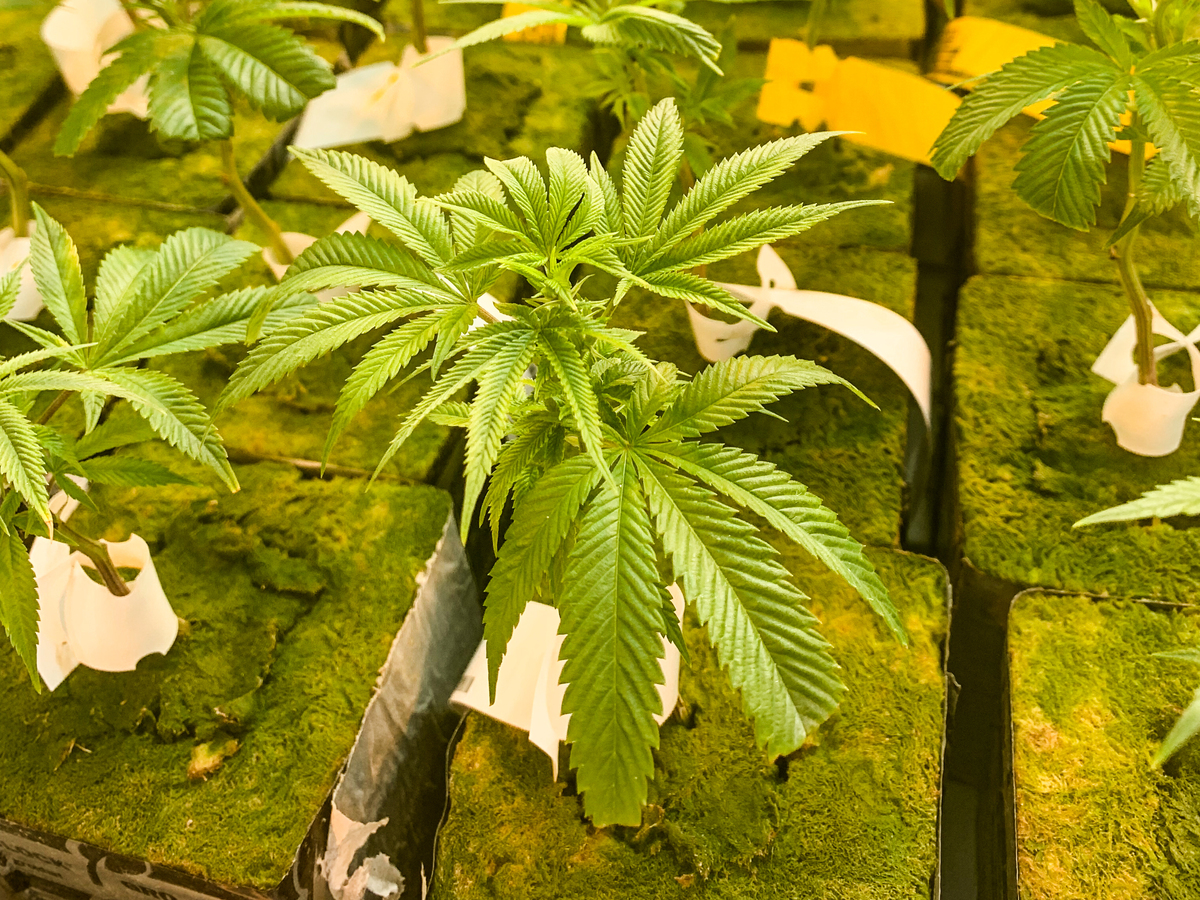 Banks won't lend to the cannabis industry, so much of the money Canndescent used to build its 27,000-square-foot grow house came from friends and family of the owner.

Anti-cannabis groups oppose the bill, and legalization generally. They argue the legal trade is a threat to public health that outweighs the tax benefits.

The measure has 157 bipartisan co-sponsors so far. But until it passes the full House and Senate, every aspect of DiGiovanni's job will be fraught with added risk and costs — from getting insurance, to paying employees, to filing taxes.

The estimated 300 U.S. financial institutions that serve the pot industry are small, state-chartered banks or credit unions. They're audited frequently, and transactions are monitored closely for suspicious activity. A cannabis business pays thousands in monthly fees just to have an account.

After scouring the state looking for a credit union to work with, DiGiovanni found one willing to deposit his marijuana revenue. But about every week, he gets calls from retail clients looking for a way to bank, because their accounts were shut down.

Banks also won't lend to the industry because if the federal government were to seize a company's assets, the lender would have nothing to collect on the loan.

DiGiovanni says the risk of that is extremely low. Yet that fear makes everything harder to access. He's been turned down by payroll companies, human-resource software firms and insurance brokers.

And, because of the extra risk, everything costs more. Canndescent invested $200,000 in an automated weighing machine that makes packaging six times faster, for example. The interest rate was 18 percent, or nearly three times the normal rate. 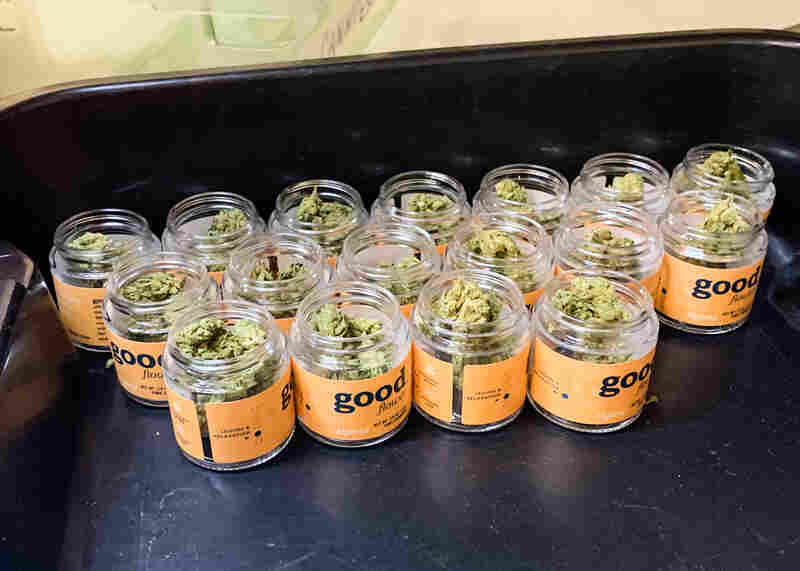 Canndescent grows and sells premium pot to retailers throughout California. Most of them pay for the goods in cash. Devan Schwartz for NPR hide caption 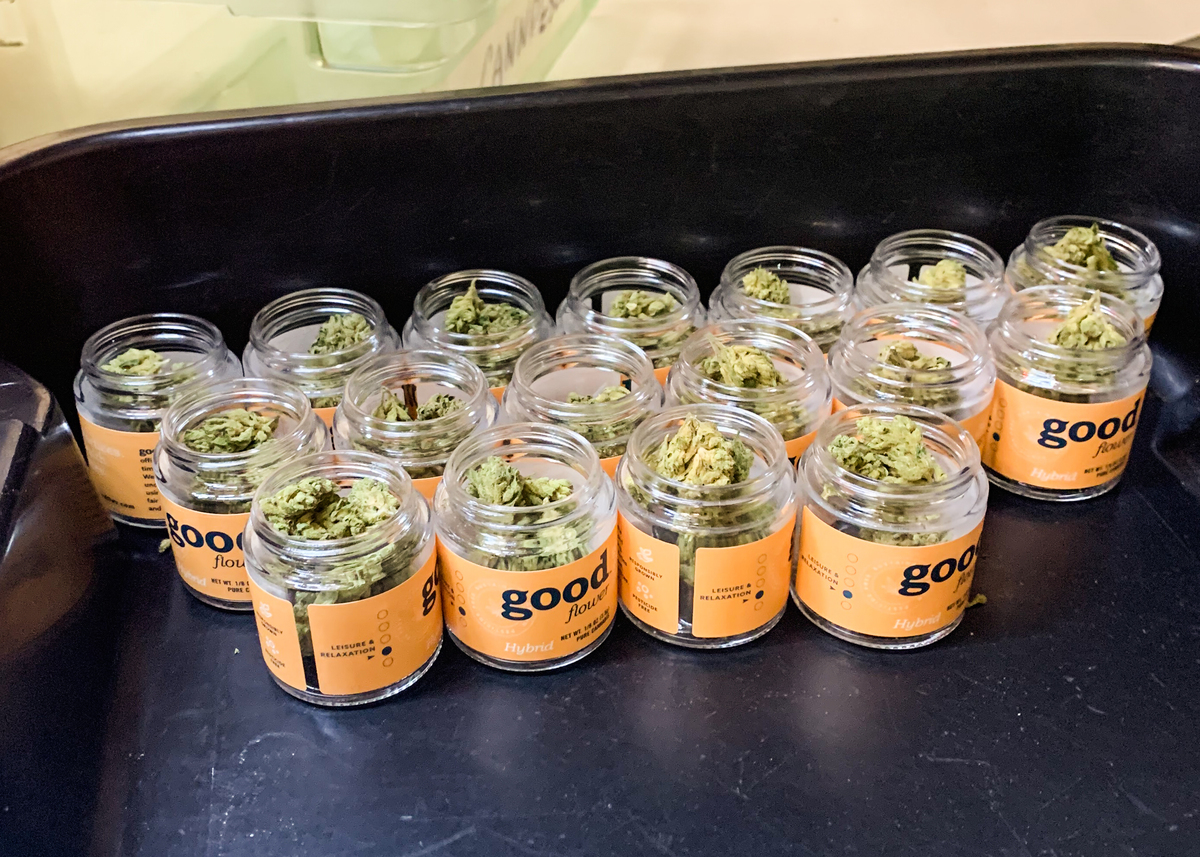 Canndescent grows and sells premium pot to retailers throughout California. Most of them pay for the goods in cash.

Two years ago, an infection destroyed Canndescent's hydroponic beds of seedlings. But crop insurance wasn't available for marijuana, so the company ate the $600,000 loss.

Most financing for cannabis businesses come from individual investors. Canndescent built its 27,000-square-foot grow house in Desert Hot Springs, Calif., largely with money from friends and family of the founder.

Meanwhile, sales keep growing, which means dealing with the headache of handling more cash — most of it in $20 bills. Counting all of that money is a pain, and it's heavy. DiGiovanni employs workers to do just that.

"It's three or four hours a day that they're standing in front of that machine, feeding cash into it," he says. And it must be counted three times, at an undisclosed location, after every transfer — a process we're not allowed to see. "It gets transported again on a random schedule to our processing facility, which is in a different city that I won't name," he says.

Safety is one primary argument in favor of legalizing banking for the industry, says Alyson Martin, co-founder of news site Cannabis Wire.

"Because these are essentially cash-only businesses, they become sitting ducks for robberies, thefts and those sorts of things," she says.

Banking is the industry's biggest challenge, she says. "I don't think I've talked to anybody who hasn't had banking headaches."

DiGiovanni says he thinks the legislation will eventually pass and that will change things for the company. He says better access to banks would help him grow the business faster and hire more. And, in the long run, raise even more tax revenue for the government. But until then, he'll continue moving piles of cash about in bulletproof vans under a blanket of secrecy.