Accessibility links
Marsai Martin, Star Of 'Little,' Is The Youngest Executive Producer In Hollywood She's 14 years old and about to make her big-screen debut in the comedy Little. You may already know her from the ABC sitcom Black-ish — but now, Martin is also taking bigger reins. 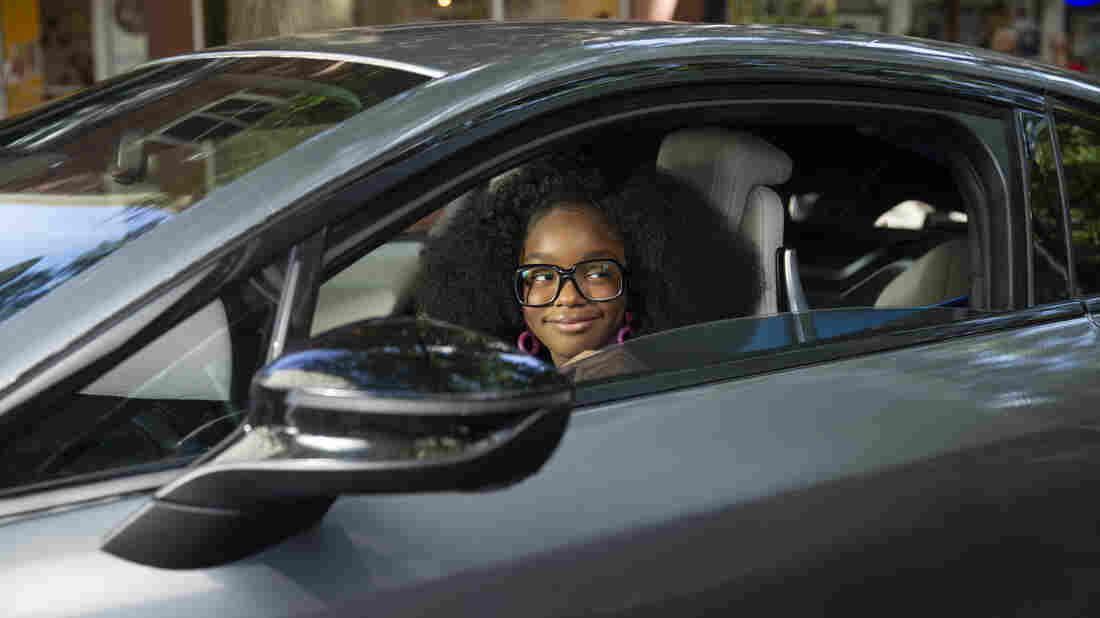 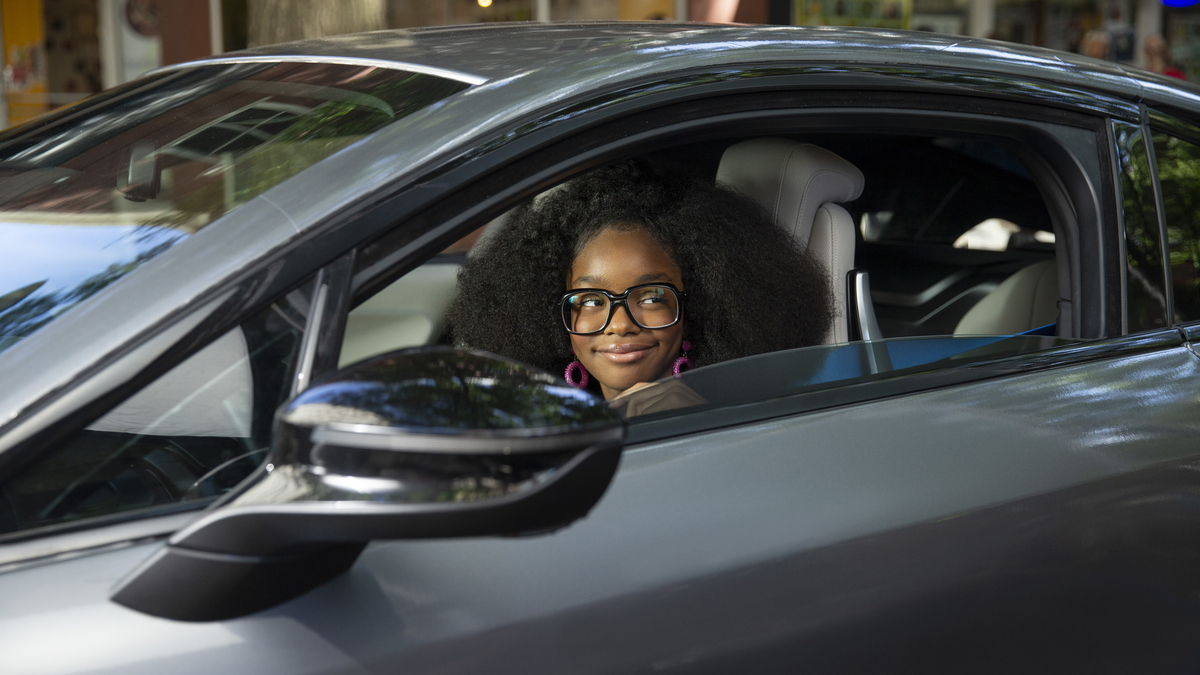 The youngest executive producer working in Hollywood makes her big-screen debut this weekend.

Little is a comedy where a big and powerful tech executive wakes up as a little kid. In the end credits, the movie screen reads: "Introducing Marsai Martin."

Marsai may be new to the big screen, but she needs no introduction to fans of the ABC sitcom Black-ish, in which she's starred since 2014. In fact, she's been acting for almost a decade. She's now 14 years old — "almost 15," she says.

"We stumbled upon this by accident," says her father, Joshua Martin. "This was not planned — so you know."

Martin says the family was minding its business at a mall near their home in Texas when a woman handed them a coupon for glamour shots. Marsai was 5 at the time, and they signed her up to get her portrait taken.

The photographer was so impressed with the way she took direction that he offered a bigger discount — if her dad promised to show the photos to a few talent agencies. Her parents kept that promise, and submitted the photos to four.

But at agency number four, Marsai landed an interview.

"She had all the agents in a conga line around the room and they're like: 'We want to sign her!'" Carol Martin says. 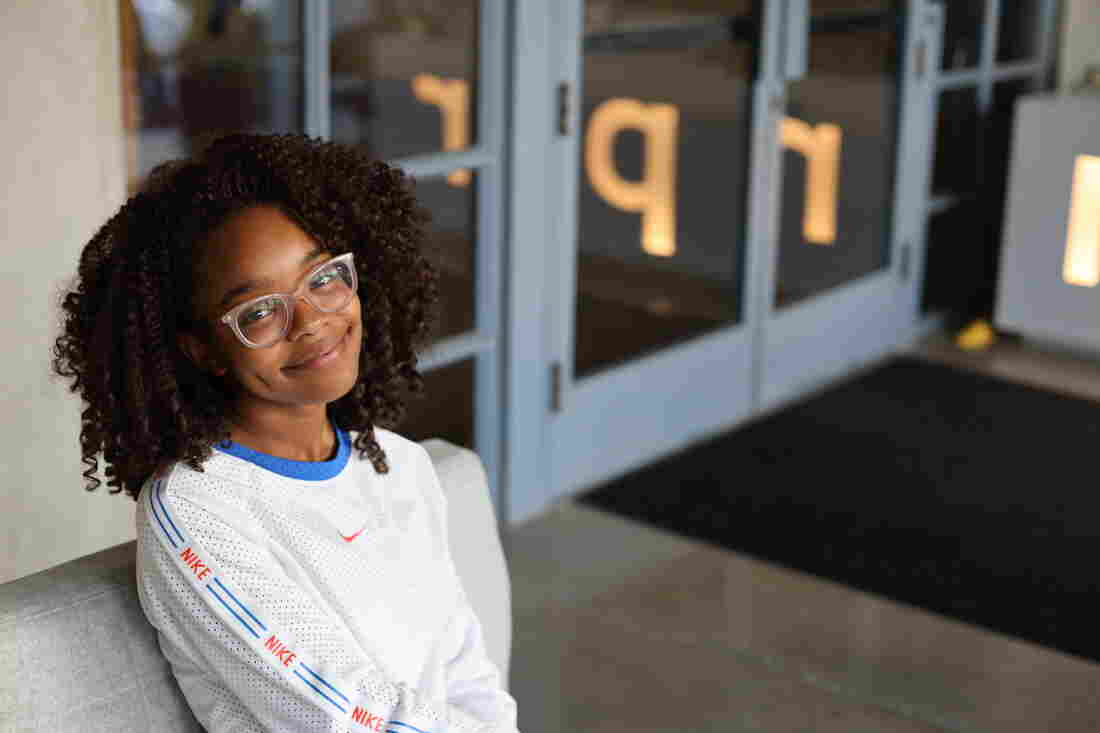 Marsai Martin poses for a photo upon visiting the NPR bureau in Culver City, Calif. for an interview. Shereen Marisol Meraji/NPR hide caption Marsai Martin poses for a photo upon visiting the NPR bureau in Culver City, Calif. for an interview.

Marsai Martin is best known for her work on Black-ish, which is about an upper-middle-class black family living in a mostly white neighborhood. It's loosely based on the life of show creator Kenya Barris.

"From the moment we met her, it was this pint-sized little ball of talent with these amazing glasses," Barris says.

He cast Marsai as one of the fraternal twins on the show, Diane. Diane is wise beyond her years and can intimidate most adults with a withering glance over her trademark glasses.

Barris says Marsai made that character her own by the second episode – with very little formal acting training. He calls her an old soul.

'Little': A Wrong-Body Comedy That Can't Get Comfortable

Her most recent character is Jordan from the comedy Little — a tech mogul who magically reverts back to her nerdy 13-year-old self. Marsai doesn't just play the lead; she pitched the idea.

If it sounds familiar, it's inspired by the 1988 film Big, starring Tom Hanks as a teenage boy who magically becomes an adult. Marsai says it was her mom's favorite movie growing up.

"That [movie] was kind of when it started to get into my head, and just saying to myself: 'What if we do this in a modern perspective?'" she says. "And, 'Maybe what if we do a female-empowerment, all-black-women cast?' So, I started talking about that with my parents, and then that's kind of how it got started."

She ran the idea by her boss, Kenya Barris. She was 10.

"She said, 'Well a lot of people tell me I kind of remind them of Gabrielle Union or of Taraji P. Henson,'" Barris says. "'Well, remember that movie Big? I want to do a movie called Little.' And I was like, 'I'm going to stop you right there.' Nothing more needed to be said."

Barris is one of the producers on Little, which is being distributed by Universal Pictures. In February, Universal signed what's called a "first-look" production deal with Genius Productions — the company Marsai runs with her parents.

"Basically, all the ideas you come up with, or anything that you have in mind for TV, film, any of that — in my case, you talk to Universal about it, and it goes to them first," she says.

Universal Pictures president Peter Cramer said he looks forward to moviegoers seeing Marsai in Little and "watching her evolve as a filmmaker."

Mask hopes Marsai looks to other women of color creators for mentorship and inspiration. Specifically Ava DuVernay, Kasi Lemmons (director of Eve's Bayou) and Dee Rees, whose screenplay for Mudbound was nominated for an Oscar.

"Because I'm concerned about what is going to happen after this film has been released and what comes next," Mask says. "I mean, we know that it can be difficult to maintain a certain high-profile standing and standard within the industry, and that opportunities don't come along as often, as readily, as easily for women of color. It's a tough, tough industry and I would encourage her to take heart and find solace and community — in solidarity with other women of color."

Marsai's mom Carol Martin says the family can already feel the difference between their daughter being on a sitcom vs. a heavily marketed film. Now, her face is everywhere.

"The billboards are now on the sides of buildings, and it's amplified in a way that is new for all of us," she says. "So we are all kind of checking in on each other. Like, 'Are you good? Are you good?' OK, she's done 18 interviews in a row, you know."

Marsai points out that anyone coming off 18 interviews would be tired.

"Like, a lot of people kind of underestimate me because I am a kid," she says.

Kenya Barris definitely has not underestimated Marsai Martin. When asked where he sees her in a decade, he laughs: "as my boss."

Until then, you can watch Marsai Martin playing the boss in Little — which opens on Friday.