Accessibility links
Sudan's Military Says It Has Taken Control And Arrested President Omar Al-Bashir Sudan's defense minister says a transitional military council will rule the country for two years — a plan that doesn't satisfy many of the thousands who demanded a regime change. 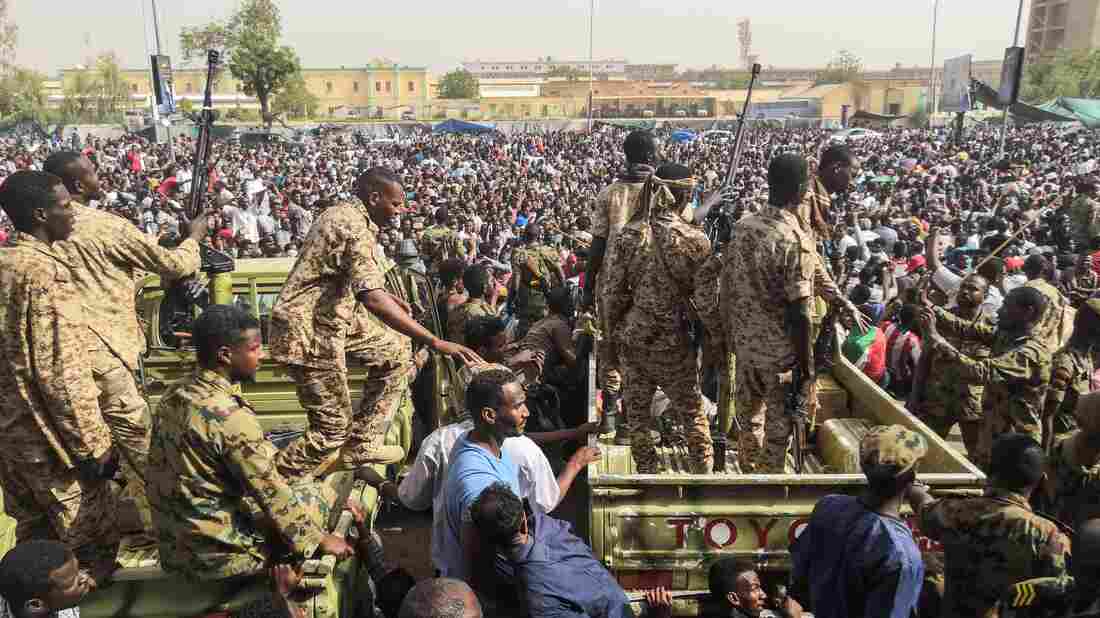 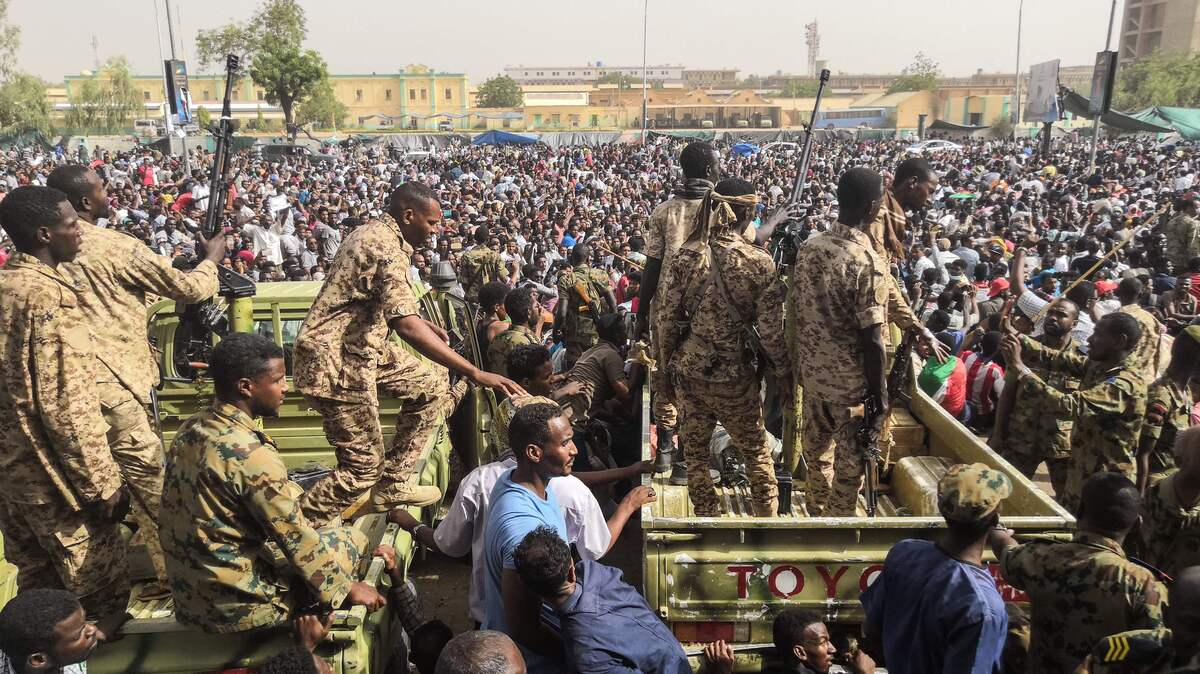 Sudan's defense minister, Awad Mohamed Ahmed Ibn Auf, said the "regime" had been removed and its head arrested, as he announced the coup in a televised statement.

The minister said a transitional military council will rule the country for two years before any democratic elections will take place.

Sudan awoke early to word from the state news agency that the military would be making an announcement — news that sent thousands of people flooding to the site where protesters have been calling for al-Bashir's ouster for months.

There has been so much anticipation for this moment, NPR's Halima Gikandi reports, that "some people were cheering but not really knowing what they were cheering for, and what was going to happen." In one sign of change, activists said many of their colleagues had been released from state prisons.

For protesters, the moment is bittersweet. Their primary demand has been for al-Bashir to step down. But their second demand was for a transitional government to move the country toward a democracy — and on Thursday, there were no indications of that happening.

The woman who has become an icon of the protests, Alaa Salah, tweeted that the military's announcement was unacceptable: "The people do not want a transitional military council. Change will not happen with Bashir's entire regime hoodwinking Sudanese civilians through a military coup. We want a civilian council to head the transition."

It's unclear what will happen next, but many Sudanese fear a military takeover. And with a number of military forces and government agencies now free to assert themselves, the political picture seems more complicated than ever.

"On one hand, you have the army, which in the past few days has been seeming to protect protesters," Gikandi explains. "And on the other hand, you have the national intelligence agency, which has been known to have done human rights violations. So what does it mean now for demonstrators to be seeing that the military is taking over, and installing a two-year transitional government, consisting of all of those various intelligence agencies?"

The opposition protests began in December over the price of bread, after the government ended subsidies. But the demonstrations soon spread to political concerns, and protesters demanded al-Bashir's ouster. Since Saturday, tens of thousands have maintained a protest vigil near the military headquarters in Sudan's capital, Khartoum.

The country's armed forces have been deployed around the capital's main roads and bridges, the BBC reports, and the city's main airport is closed.

The Sudanese Professionals Association, the civil society group that has led protests since December, had called on residents to mobilize on Thursday for a sit-in. The group tweeted that the military leadership must "hand over power to the people."

Sudan's current crisis "cannot be addressed through another military coup," the group said. The SPA called for protests to continue until power is handed over to a civil transitional government.

"We will not accept Bashir's aides as part of the new situation," protester Mohamed Adam told Reuters. "Those people have killed protesters."

Media reports say the current swell of protesters is largely peaceful. The SPA said it advocated a peaceful "approach to revolution and change."

Sudanese security forces killed at least 14 people on Tuesday, NPR previously reported. But according to the BBC, the army stepped in to protect protesters from at least two attacks by forces loyal to al-Bashir.

Now all eyes are on the Sudanese military, which has a long history of coups in the country.

Riots and strikes in 1964 led to the military giving up control.

But Col. Gaafar Muhammad Nimeiri led a second military coup in 1969, according to the U.S. State Department's history. Nimeiri became prime minister, and the military banned political parties and dissolved parliament. He survived multiple coup attempts before succumbing to another military coup in 1985.

Gen. Abdel Rahman Swar al-Dahab led the military overthrow of Nimeiri in that coup. This time the military handed over power to a civilian government of Prime Minister Sadiq al-Mahdi after elections in 1986.

Al-Mahdi only lasted three years in power afterward. Al-Bashir, with the support of military officers and an Islamist political party, took power as leader of a junta in his own coup on June 30, 1989.

Al-Bashir had been in power almost 30 years. The International Criminal Court in the Hague issued warrants for al-Bashir's arrest in 2009 and 2010 for genocide and crimes against humanity in Sudan's Darfur region.

But those arrest warrants have not been carried out, with al-Bashir traveling to South Africa in 2015 and Chad in 2010 and returning home.