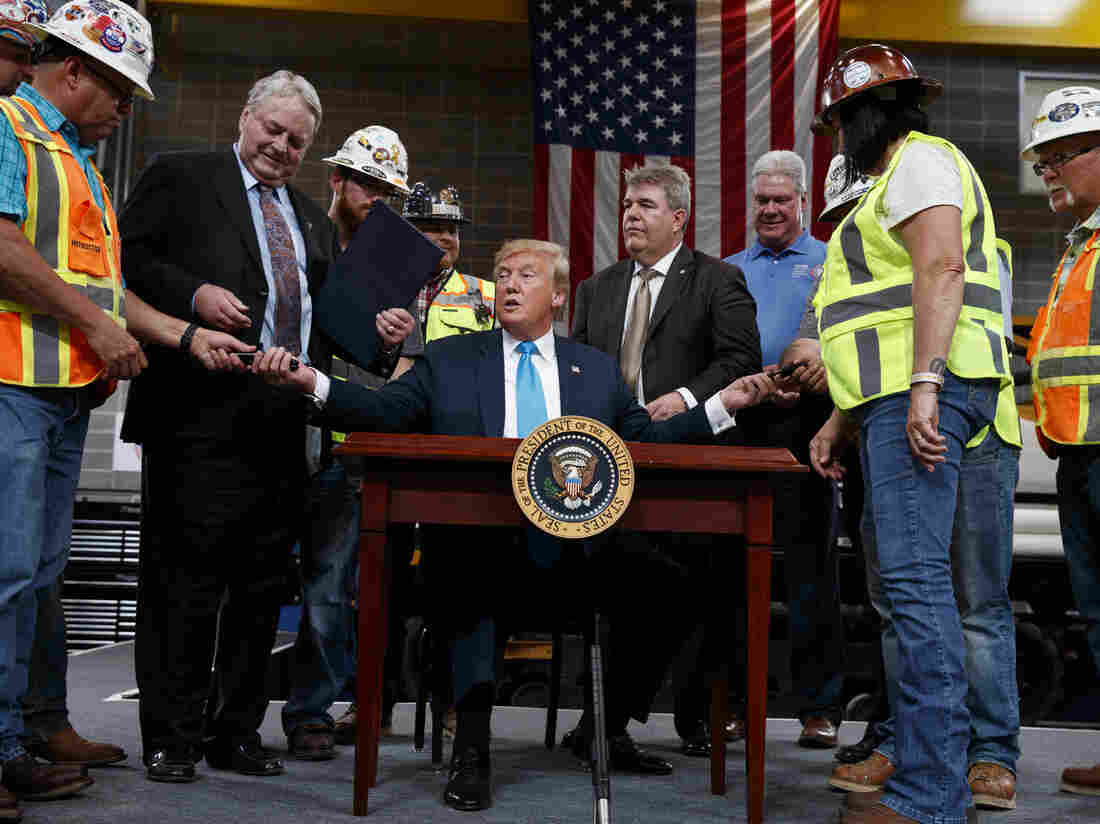 President Trump hands out pens after signing an executive order aimed at making it easier for companies to pursue oil and gas pipeline projects. The president addressed an audience at the International Union of Operating Engineers International Training and Education Center in Texas. Evan Vucci/AP hide caption 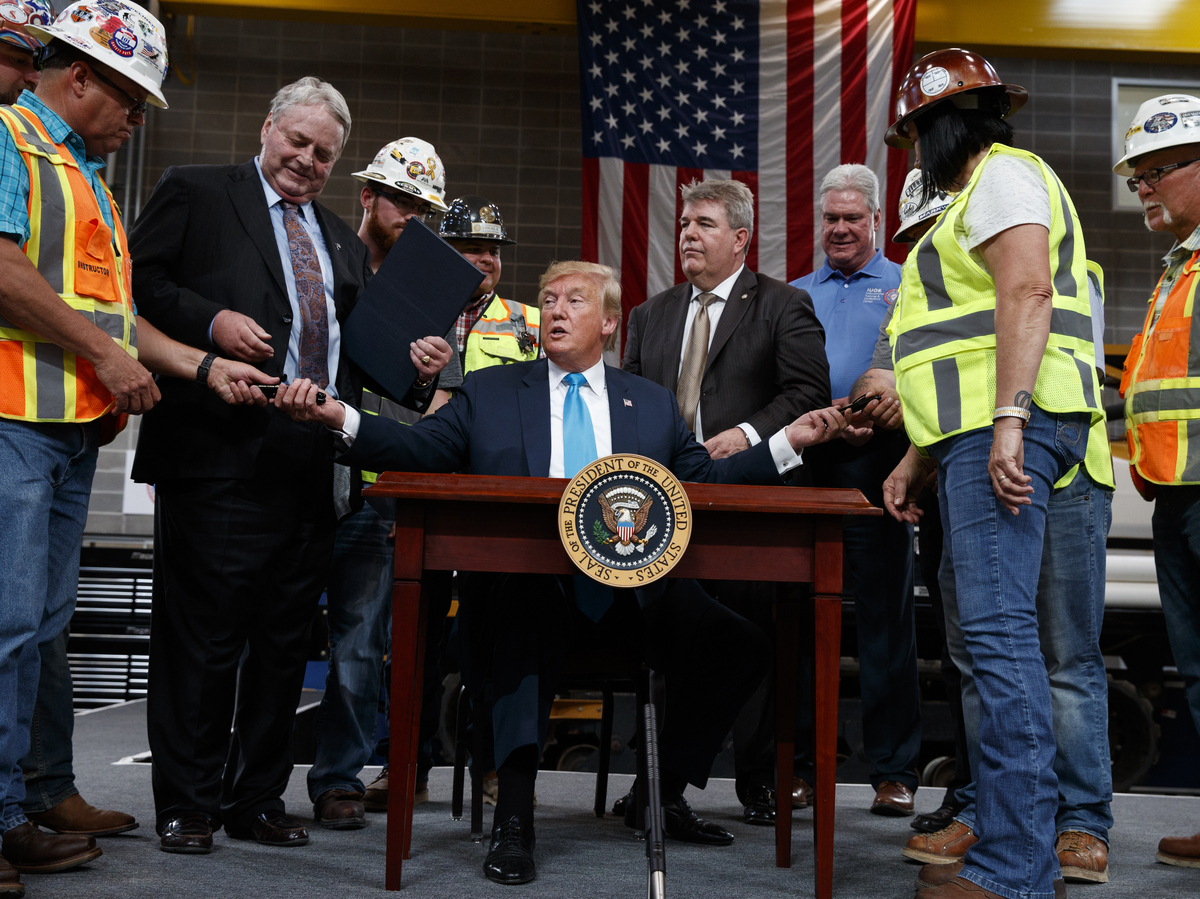 President Trump hands out pens after signing an executive order aimed at making it easier for companies to pursue oil and gas pipeline projects. The president addressed an audience at the International Union of Operating Engineers International Training and Education Center in Texas.

President Trump stood in front of an audience of operating engineers in Crosby, Texas, on Wednesday and promised to make it easier for them to lay pipe.

"Nobody in the world can do what you folks do," Trump said to applause from the assembled crowd. "And we're going to make it easier for you."

After speaking at the International Union of Operating Engineers International Training and Education Center, Trump signed two executive orders aiming to make it easier for companies to build oil and gas pipeline projects — and harder for states to block them.

"Republican lawmakers and energy groups have long accused blue states of blocking pipeline projects using a section of the Clean Water Act," NPR's Nathan Rott reports for our Newscast unit. "One of Trump's executive orders will aim to weaken that power. Whether that actually happens will remain to be seen. Executive orders only do so much — and lawsuits are sure to follow."

In early 2017, less than a month into Trump's presidency, his administration reversed an Obama administration decision to deny a key permit for the Dakota Access Pipeline and instead approved its construction. Just last month, Trump issued a second presidential permit for the Keystone XL oil pipeline after an earlier permit was overturned by a U.S. district judge. His latest permit is also being challenged in court.

One of Trump's new orders calls for the EPA to review a section of the Clean Water Act that requires applicants seeking federal permits for energy infrastructure projects that might pollute protected waters to get certification from the states where any potential contamination could happen.

Federal guidance and regulations regarding that requirement — which gives states a direct role in building projects — are described in the executive action as "outdated" and responsible for "confusion and uncertainty" that slows down infrastructure projects.

The order also seeks to make it easier to transport natural gas when a pipeline can't be used.

The action stipulates an update to a Department of Transportation safety regulation on facilities that store natural gas in its liquid state so that it can be carried long distances when pipeline transport isn't possible. The change would allow transport of the liquefied natural gas in approved railroad tank cars.

Trump's order also instructs the secretary of labor to investigate whether there are "discernible trends" in how certain managers of ERISA-protected investment-based retirement funds invest in the energy sector.

The second order gives the president the exclusive responsibility to "issue, deny, or amend" permits for infrastructure projects that cross international boundaries of the United States.

"The president — not the bureaucracy — will have sole authority to make the final decision when we get caught up in problems," Trump said.

Trump said he's ending a "war on American energy." But critics say the orders are an overstep of federal authority.

"Trump's developing an addiction to executive orders that rubber-stamp these climate-killing projects," Brett Hartl, the government affairs director for the Center for Biological Diversity, told The Associated Press.

"States must have a role in the process for siting energy infrastructure like pipelines," Cuomo said in a statement.

Inslee is making climate change a top issue in his run for the Democratic Party's presidential nomination.

"When states say 'no' to the development of natural gas pipelines, they force utilities to curb safe and affordable service and refuse access to new customers including new businesses," said Karen Harbert, the president and CEO of the American Gas Association, in a statement.

Trump stopped in Crosby for the signing on his way to meet with supporters and fundraisers in Houston.

While he had the Crosby audience's attention, Trump took the opportunity to thank part of his base.

"I know you well, and I also know who most of you voted for," the president said. "And I appreciate it."