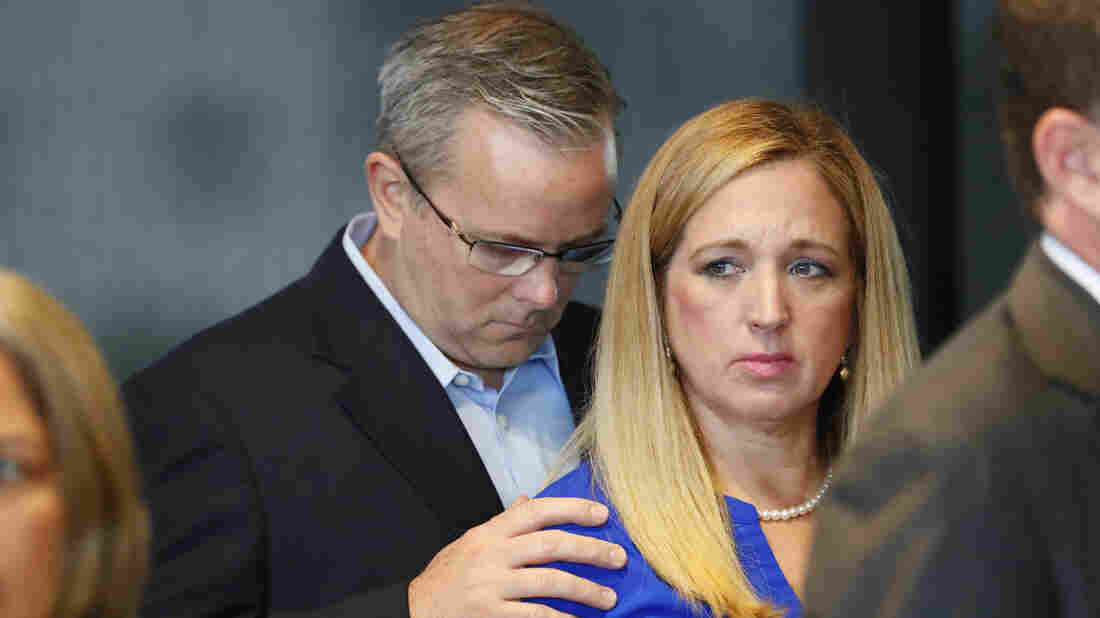 Lisa and Richard Olson, whose son was injured during last year's Parkland, Fla., school shooting, look on during a news conference Wednesday in Fort Lauderdale, Fla. Lisa Olson spoke about how difficult it has been for her family to cope with the lingering effects of the trauma. Wilfredo Lee/AP hide caption 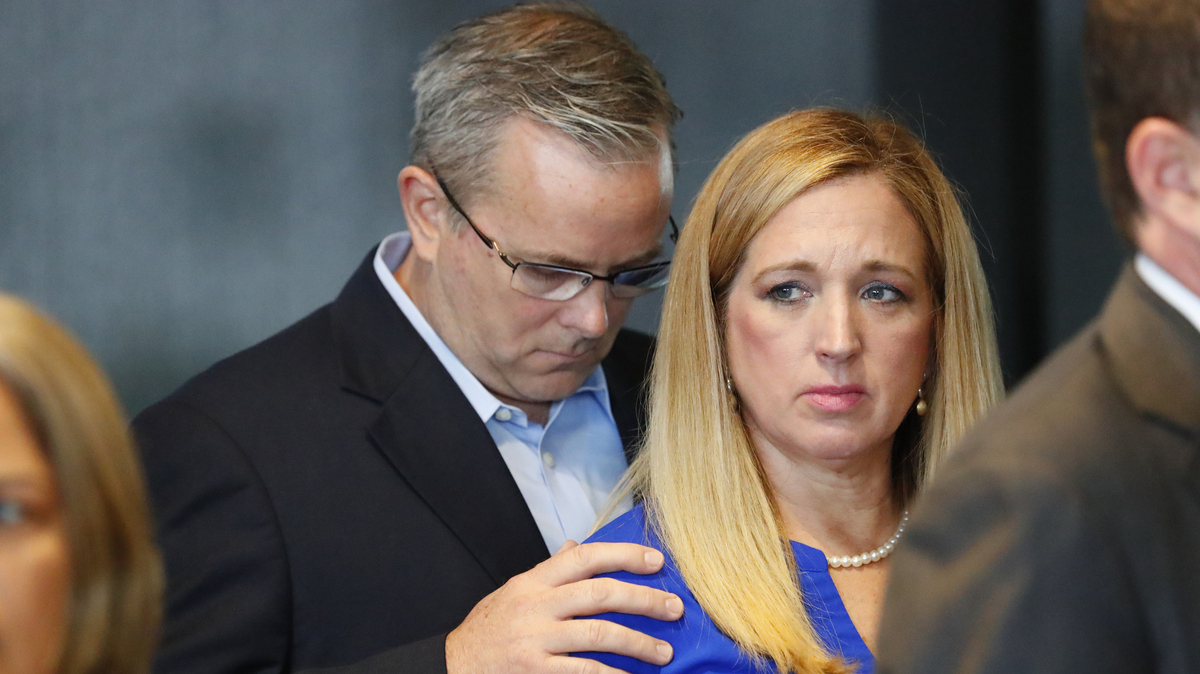 Lisa and Richard Olson, whose son was injured during last year's Parkland, Fla., school shooting, look on during a news conference Wednesday in Fort Lauderdale, Fla. Lisa Olson spoke about how difficult it has been for her family to cope with the lingering effects of the trauma.

Families of Parkland school shooting victims are filing at least 22 lawsuits against Broward County's school board, sheriff's office and more, alleging they failed to prevent the attack that left 17 people dead and another 17 injured.

Attorneys representing families of those who were killed or wounded at Marjory Stoneman Douglas High School on Feb. 14, 2018, argue several organizations and individuals were responsible for the massacre. In addition to the school district and sheriff's office, other targets in the lawsuits, announced Wednesday, are Henderson Behavioral Health, which provided mental health services to confessed shooter Nikolas Cruz; former Stoneman Douglas security guard Andrew Medina, who was the first to see Cruz on campus but did not call a "code red" lockdown; and former Broward Sheriff's Office Deputy Scot Peterson, the school resource officer who hid during the shooting rather than entering the school building to confront the shooter.

The attorneys said the families have been working over the 14 months since the shooting to reach a settlement — a fund that would provide millions in compensation for each family. But the lawyers say the school board has been lobbying against legislation at the state Capitol, where lawmakers are now holding their annual session.

A spokeswoman for the school board refuted the assertion that the district has lobbied against the legislation creating a compensation fund for families.

'We Live With It Every Day': Parkland Community Marks 1 Year Since Massacre

Chief Public Information Officer Kathy Koch said in a statement the district hired a firm that helped to write the legislation and has been lobbying in favor of it. She said the district consulted families when conceptualizing the fund. The school board voted to include the legislation on its official list of priorities for the 2019 legislative session.

As for the lawsuits, both the school board and the sheriff's office responded that they do not comment on litigation.

Joseph DiRuzzo, an attorney who represents Peterson, said he is confident that the lawsuits "lack merit," and he plans to fight them "vigorously." The attorney representing Medina declined to comment.

One of the plaintiffs is Mitchell Dworet, who said he is in a "very unique position" because one of his sons was killed and the other was injured.

Dealing With Trauma After A Mass Shooting — Over The Long Term

"My son is Nicholas Dworet. He was killed in the third room," Dworet said. "My other son is Alexander Dworet. He was in the first room. He was injured, he saw children killed and he lost his brother. This is a life sentence for me. It's every day.

"I want accountability. I'm not going away. I'm in for the long haul," Dworet said. "This is not normal. This is not right. There were failures. I want to be in court. I want to see who, what, where, how, why."

Lisa Olson — whose son, William, was shot and survived — also spoke Wednesday about how difficult it has been for her family to cope with the lingering effects of the trauma.

"My son didn't go to school today. He couldn't, and we have many days like that now," Olson said.

"It's a daily struggle," she said. Referring to the survivors, she said: "They are not the people they were before Feb. 14."

Another plaintiff is Lori Alhadeff, whose daughter, Alyssa, was killed. Alhadeff was elected to the Broward School Board last November.

When asked about Alhadeff's potential conflict of interest — she is apparently participating in lawsuits against the school board on which she sits — her attorney, Bob Kelley, said: "She obviously cannot be involved in any kind of discussion about a settlement or resolution of this case."

Under Florida law, the legislature must approve any local government settlements that exceed $300,000. The process of passing these bills often takes years, and many are never approved. State Sen. Lauren Book, a Broward County Democrat, filed three bills this session that would create compensation funds for families of Parkland shooting victims.

The attorneys representing the families said these bills could be used to ensure approval of the settlement during this legislative session, which ends May 3, if the parties reach an agreement in time.

Kelley said it's not too late to reach a settlement and pass a bill this session, if the school board and other parties are willing to negotiate.

Without a settlement, the lawyers predict the lawsuits could take years to resolve, cost millions of dollars and require survivors of the shooting to provide depositions.

"Why would they go out and spend millions of dollars on attorneys' fees to defend cases that they know they're going to lose? And that the verdicts that the juries are going to return are going to be far and above anything that these people would take to settle these things?

"They do have a fiduciary duty, and they're not fulfilling it," he said.

The attorneys didn't specify how much money the families are seeking in compensation.