Accessibility links
Amanda Kolson Hurley's 'Radical Suburbs' Takes Another Look At These Maligned Living Areas Amanda Kolson Hurley is well-acquainted with suburbia's many negative stereotypes. But in a new book, she asks us to take a look at what is possible in this realm when the human spirit is at its best.

Beyond Crabgrass: A Look At America's 'Radical Suburbs'

Beyond Crabgrass: A Look At America's 'Radical Suburbs' 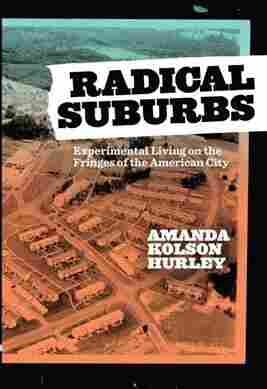 Experimental Living on the Fringes of the American City

Think you know the suburbs? Well, it might be time to revisit.

At least, that's what Amanda Kolson Hurley, a senior editor at urban news site CityLab, wants you to do. Kolson Hurley is well-acquainted with suburbia's numerous negative stereotypes — some of them, such as racial segregation and ecological threat, all too valid. But in Radical Suburbs: Experimental Living on the Fringes of the American City, Kolson Hurley sets out to reveal a different side of the vast patchwork of not-quite-urban, not-quite-rural zones in which more than half of Americans live.

Writing with brisk, upbeat directness, Kolson Hurley urges the reader to envision a very different kind of suburb: one that's a mix of ethnic groups and income levels, where you can buy or rent a starter home for a reasonable price. One where you can walk or take public transit to most of the places you need to go. One with a flourishing sense of community, where you participate in your neighborhood association and know the people on your street.

She makes a great case that such a vision is vitally necessary. "Rising social inequality and demographic shifts — and above all climate change — make it imperative to rethink who and what our suburbs are for," she writes. With unapologetic idealism, she looks forward buoyantly to the results of that rethinking, anticipating changes such as creative tax breaks to encourage diversity, improved enforcement of the Fair Housing Act, and an increase in co-housing and other unorthodox — but equitable and eco-friendly — living arrangements. When she knowledgeably describes workable solutions, her enthusiasm is contagious. "Simple design changes to connect [suburban apartment] developments to nearby commercial areas [have] made residents more than 60 percent more likely to walk rather than drive there," she notes. "Rather than slavishly pursuing new construction ... forward-thinking suburbs could redevelop ... 'grayfields' instead: dead malls, aging strip malls and high-vacancy office parks."

Kolson Hurley's visions are compelling, but it's less clear whether they're actually achievable. By way of proof, she shows that diverse, sustainable suburbs have been built before. Combing through the history of housing development all over the U.S., she's found a handful of places where political fervor, artistic audacity, social idealism or a combination of the three have fostered vibrantly unique suburban communities. Today, few of those communities still fulfill their original ideals. Even so, their illustrations of what's possible are inspiring, leading the reader to overlook (at least for a while) the implications of their decline.

In Trevose, Pa., there's Concord Park, built by socialists and Quakers in 1954 to challenge housing segregation. Its mix of black and white families — as well as several interracial ones — gave the country a model integrated community at a time when such a thing seemed utterly unimaginable. In Lexington, Mass., there's Five Fields, designed in the early 1950s by proteges of Bauhaus founder Walter Gropius. Its layout harmonizes with existing natural features and promotes neighborly bonding by providing ample common land. And there's Stelton, N.J., founded by anarchists in 1915. In its heyday, collective matters were decided by vote — children included — husbands and wives weren't always legally married and the locals "sometimes refuse[d] to stand for the national anthem at the movie theater in New Brunswick."

There's also Economy, Pa., Greenbelt, Md. and Reston, Va. — all places where high ideals were allowed to triumph, however fleetingly, producing ways of life that residents would remember as uniquely stimulating, communal and humane. "Humane" is Kolson Hurley's word, an inspired adjective to evoke a sense of what, ultimately, we really need our living spaces to be. Her stories demonstrate what the unfettered human spirit can achieve when it's at its best.

But the overall history of housing in America isn't about the unfettered human spirit at its best; it's about greed and fear and short-sightedness. Those forces have had their way with the little communities Kolson Hurley chronicles. Some have all but vanished, while others have evolved beyond recognition. Meanwhile, she admits, the vast majority of America's suburbs are as inhumane as ever.

But that makes this little book all the more necessary. The communities Kolson Hurley chronicles are welcome reminders that any place, even a suburb, can be radical if you approach it the right way.

Etelka Lehoczky has written about books for The Atlantic, the Los Angeles Review of Books, The New York Times and other publications. She tweets at @EtelkaL.