Accessibility links
A Dystopian High School Musical Foresaw The College Admissions Scandal A California high school is staging an original musical called Ranked, set in a world where class rank means everything, and some parents are willing to pay for their student to get a better spot. 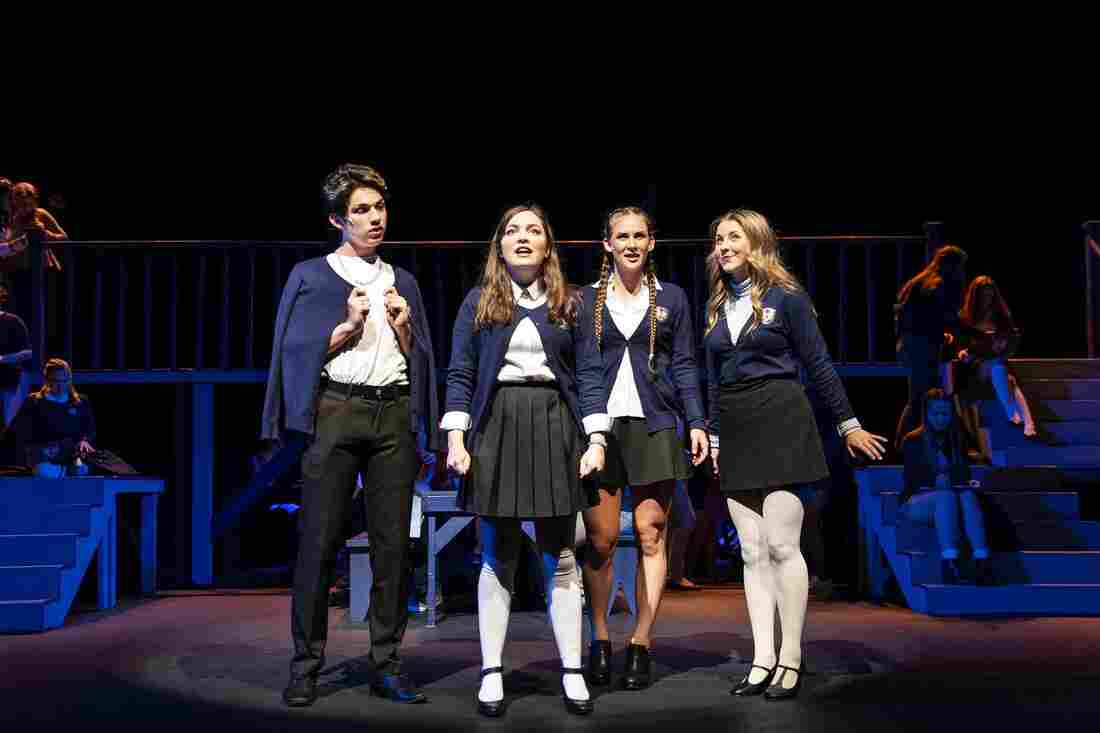 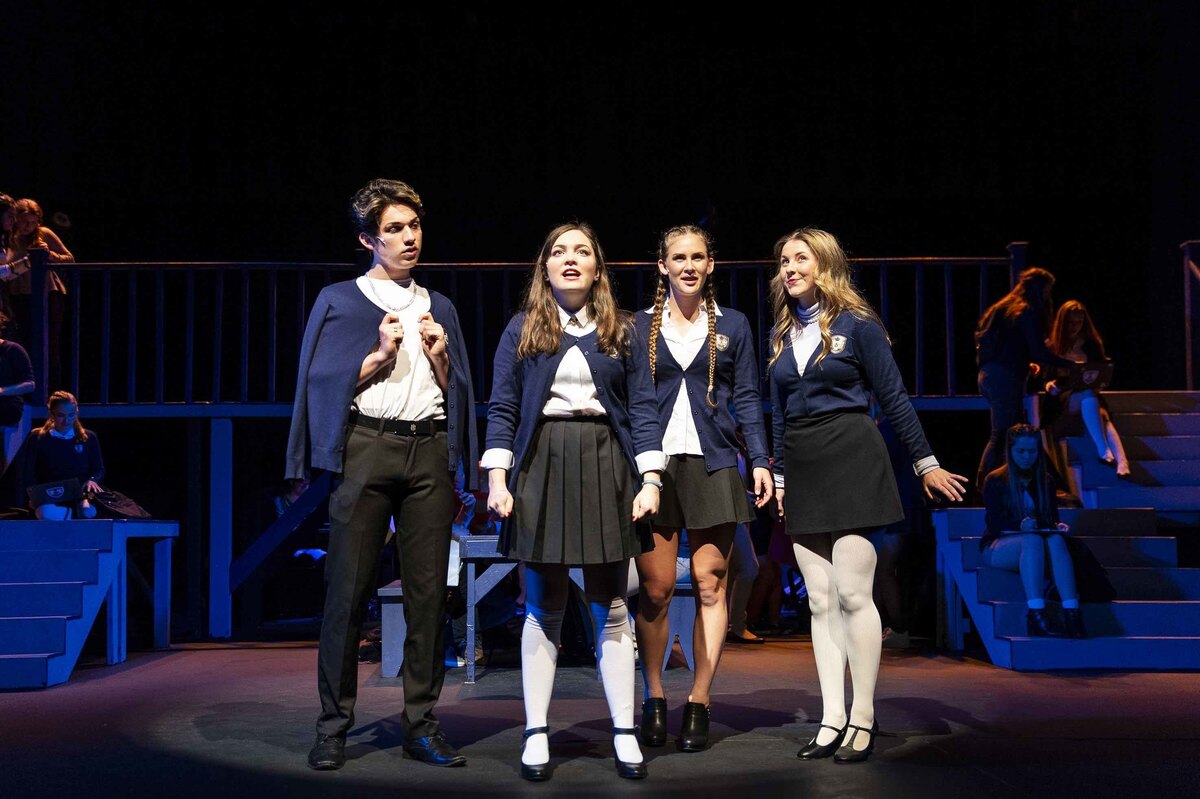 A new musical explores life in high school in a way that's eerily familiar. It's called Ranked, and it's set in a dystopian world where your class rank — determined by grades and test scores — governs everything from where you sit to what your future holds.

There's a mean girl, ranked No. 1; a student who refreshingly doesn't care about rank; and a student on the edge who's under immense pressure to improve their standing. Really, all the characters are under immense pressure. It's a major theme throughout. And at the end of Act 1, there's a major plot twist: It turns out, one of the main character's parents is paying to inflate a child's grade — and the student had no idea.

"We're literally watching our story that we wrote play out in the national news," says Kyle Holmes, a theater teacher at Granite Bay High School in Granite Bay, Calif.

He and David Taylor Gomes, who helps run the school's musical, started writing the story last spring, long before the Justice Department announced charges against about 50 people in what prosecutors called the largest college admissions scandal in the U.S.

That scandal — and the gall of wealth and privilege in America — has been the subject of conversations in nail salons, at dinner tables and even in the halls of Congress. Just this week, more than a dozen parents agreed to plea agreements and others were indicted.

How the musical came to be

Last spring, exasperated from the uninspiring list of show choices, Holmes and Gomes set out to write a show that was relevant and had realistic characters for high schoolers. They wanted to write something that explored life at a school like Granite Bay.

Holmes, who wrote the book for the musical, says it's easy to see the pressure to do well at Granite Bay. "[Our students] are stressed all the time. They're staying up late, they're not sleeping, they're studying."

That stress, and the pressure that comes with it, inspired the lyrics of the song "Someone Always Bleeds":

Rich kids like you
Never have to pay their dues
Who needs to read textbooks
You've got daddy's checkbooks
Someone always bleeds! ...
Maybe we're all pawns
Maybe we got played
We don't all have the funds
Are you feeling betrayed?

"Did I tell the future? I don't know," Gomes says with a laugh. He wrote the play's music and lyrics. "There was definitely a tangible energy in the air when we realized our story was accurate."

So how did this story, written months ago, come to be so spot-on? Early in the process, Gomes and Holmes involved experts: their students. They asked students to submit monologues, and they held workshops where dozens of students shared what their lives were like. They wanted to dig below the surface — beyond the idea of "school is hard, tests are hard," Gomes explains. He says they wanted the good stuff — "Not what they tell their parents, not what they tell their friends, but the things that they think about and don't express."

Over and over again, these conversations came back to the stress of academics and the value of self-worth. Many of the things students said made it directly into the script.

In the show, Emma Harlow, a senior who plays student Sydney Summers, delivers the line, "How do we know the difference between who we actually are and what people want from us?"

She says that line gives her all the feels. "It really hits deep."

That's partly because Harlow, the real-life student, actually said those words to Holmes, her theater teacher, months ago.

"I felt that my whole entire life," she says. "I'm just doing things to make sure my family looks good and part of me got lost along the way."

Some of those feelings are captured in the song "Come Up for Air," when the students in the show begin to reconcile expectations with who they really are. "These waves keep crashing down," they sing. "But we're still there."

"Nothing makes you feel more heard than when someone puts your words into another story," Harlow says. "And you know that story is making other people feel heard."

Senior Natalie Collins loves a line that comes right after the characters discover a student's family paid for his rank. The line is (spoiler alert!): "Ryan was playing the game, just like the rest of you."

"It's just so disgustingly real!" Collins says. "We're all fighting and we're all playing this game to get to the top, and get to the next step of education, and a lot of hard work — real work — gets lost along the way."

"Everyone feels this way"

Usually, Granite Bay announces its spring musical by posting headshots of the performers in the hallway. But this year, it tried something a little different: Holmes asked students to anonymously submit personal text messages, exchanges and emails that depicted the pressure the students were under from parents and counselors.

A: I'm watching you
B: Where am I currently then
A: Failing class

They used the messages in a collage that included headlines from recent news stories ("The Silicon Valley Suicides," "Is class rank valid?") and hung it in the hallway instead of the headshots. A banner at the top reads: "Pain is temporary. Grades last forever." 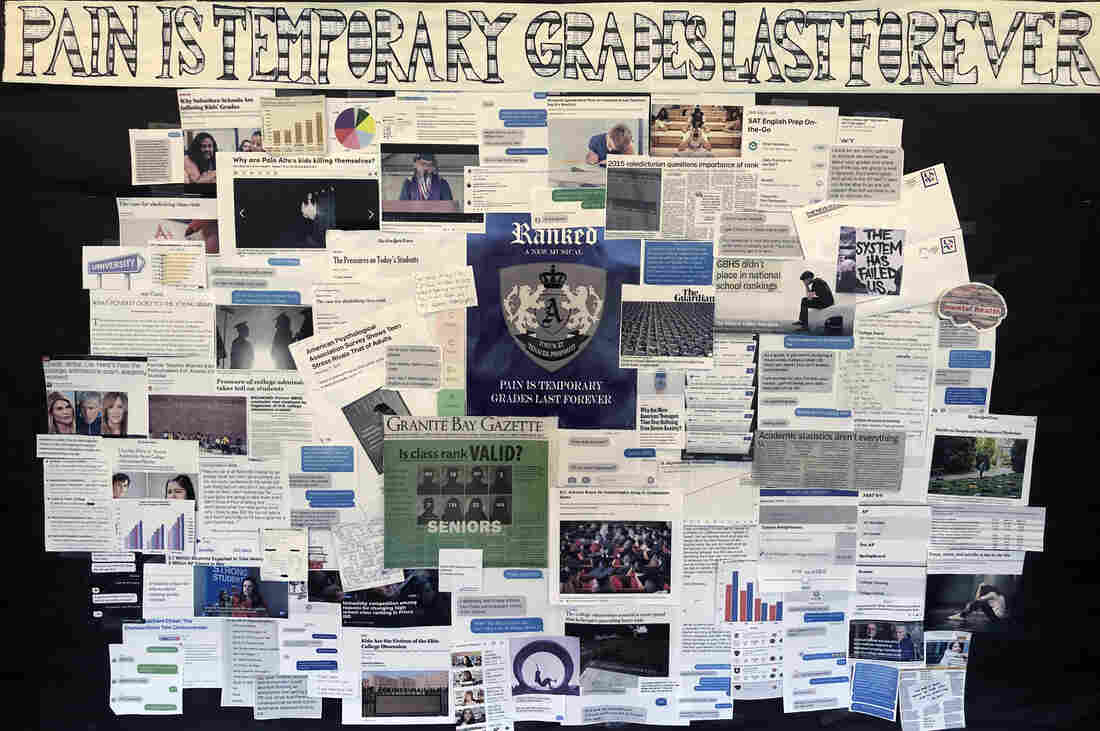 "Alone, all the messages seemed crazy," Harlow says. "And then we put it all together, and literally everyone feels this way. Everyone's parents are saying these things. We're all getting these emails. It's not good that we're all doing that, but it showed us that there is actually an issue."

When the show debuted on April 4, Harlow says she and her castmates watched their parents, and their friends' parents, start to understand just how competitive and stressful their lives feel. Harlow is hopeful those conversations will continue after the show closes this weekend.