Accessibility links
Which Presidential Candidates Have Released Tax Returns President Trump has refused to release his tax returns. Many Democrats are using that against him, as they reveal their own personal wealth and financial interests. 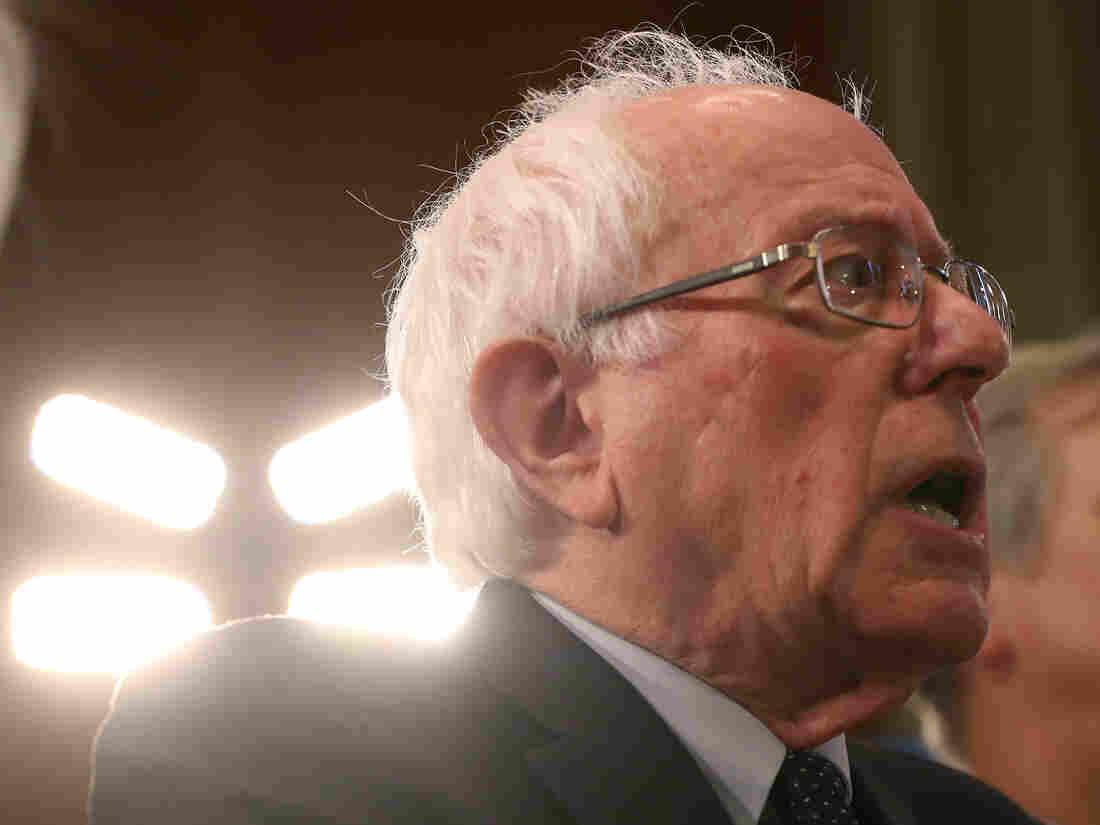 Sen. Bernie Sanders of Vermont says he is set to release his tax returns Monday. For the first time in his career, it's been revealed that Sanders is now, in fact, a millionaire. Mark Wilson/Getty Images hide caption 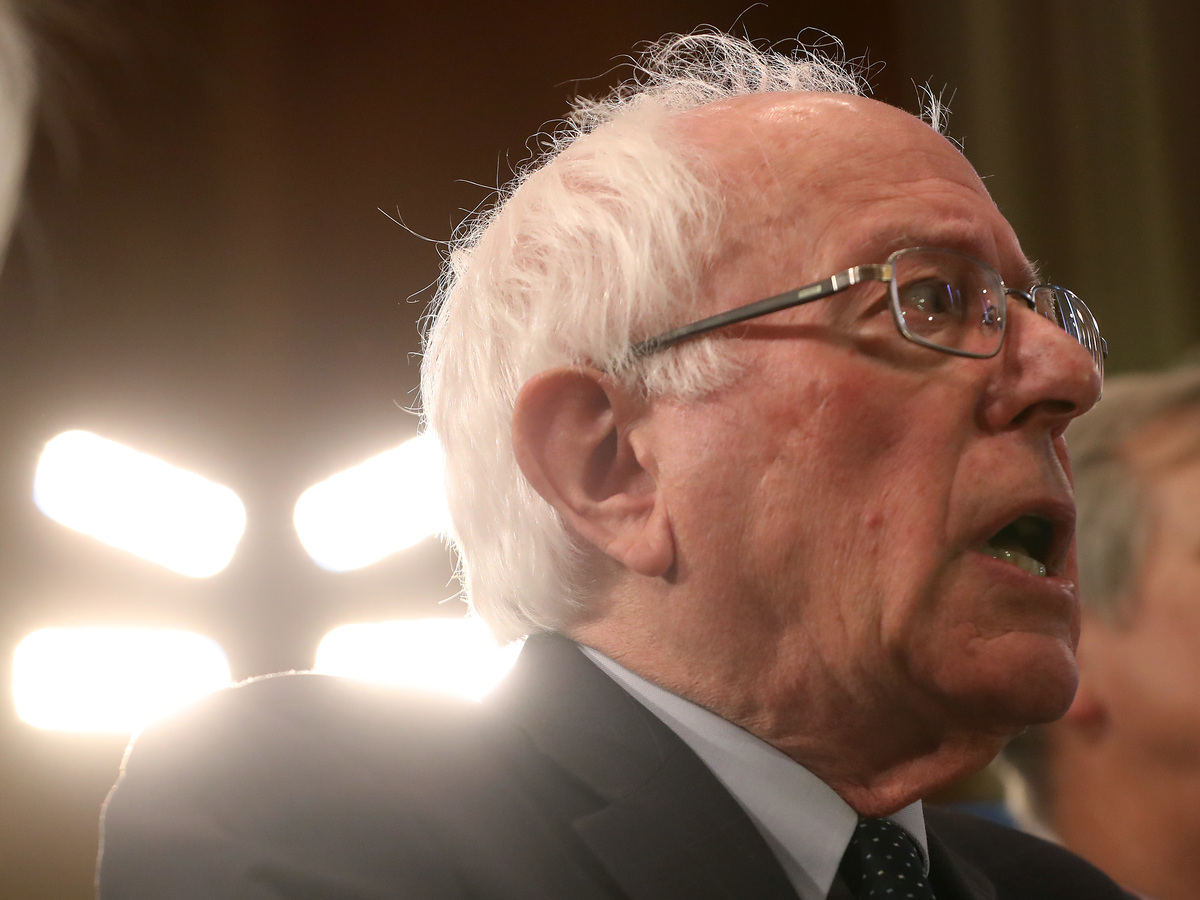 Sen. Bernie Sanders of Vermont says he is set to release his tax returns Monday. For the first time in his career, it's been revealed that Sanders is now, in fact, a millionaire.

Congressional Democrats are embroiled in the fight to try to compel the release of President Trump's tax returns, which he continues to decline to do. But with the deadline to file taxes coming Monday, it's Democratic candidates who are in the spotlight.

As Democrats try to grab the higher ground on transparency with regard to their personal finances, so far only three of the almost 20 Democratic candidates have released their 2018 returns as of Thursday night.

Sen. Elizabeth Warren of Massachusetts, Washington Gov. Jay Inslee and Sen. Kirsten Gillibrand of New York have released them. Gillibrand was the first to do so. Sen. Amy Klobuchar of Minnesota has also released 12 years of taxes through 2017 so far. Sen. Bernie Sanders of Vermont is pledging to release his by Monday. Kamala Harris, Beto O'Rourke, Pete Buttigieg, Cory Booker and others have indicated they will release them but haven't been specific about when.

"I've put out 11 years of my tax returns, because no one should ever have to guess who their elected officials are working for," Warren said Wednesday. "Doing this should be law."

But it's not law. It's merely been a 40-year custom, and another precedent that Trump broke as a candidate and as president. To some, it may seem nosy and superficial to want to see every cent someone running for office has made, but to many others, there are good reasons to care. Here are three things that voters often look for, as your author wrote about in 2016:

1. Conflicts of interest: Where does their money come from, and could that influence the kind of policy they try to implement as president for the rest of us?

2. How charitable are they? Most of these candidates are far wealthier than the average American. The median U.S. household income as of 2017 was just shy of $58,000 a year. Expect everyone running to make more than that, so how much do they give to charity, and what does it say about their priorities depending on who they give to?

3. Are they like us — or do they bend the rules? There are lots of candidates over the years who have been creative about how to reduce their tax rates, using various tax deductions and loopholes. Do they pay a rate that is commensurate with most Americans? President Trump said during a 2016 presidential debate that if it's true he hasn't paid federal income taxes in some years, "that makes me smart."

Candidates have released tax returns for all those years prior as a way of being transparent. Rumors had circulated for years about Richard Nixon's campaign expenses, wealthy backers and an effort to game the tax system in the 1950s and then again in the 1970s. (This was separate from the Watergate investigation.)

Trying to tamp down the criticism, he released four years of tax returns in 1973, and he had a congressional committee review them. That committee found he owed almost $500,000 in back taxes and interest (more than $2 million in today's terms).

Since then, it has become routine for presidential candidates to release their taxes. Candidates do so to try to reassure the public that there is nothing untoward hidden away and to be on the level about any potential conflicts.

They are, after all, seeking to hold power in arguably the most public and influential office with the loudest microphone in the world. At any time, a president can command an audience on any subject he or she wishes.

Despite pressure to release his, Trump has declined to, first as a candidate and now as president. He's the first president since Nixon not to release them. Trump has said that he continues to be under audit by the Internal Revenue Service as a reason for not releasing his taxes — despite there being no prohibition from releasing them even if under audit.

Leaked tax documents during the 2016 campaign showed Trump incurred almost $1 billion in losses that might have allowed him to not pay taxes for almost two decades.

Sanders, an independent from Vermont running as a Democrat for president, has landed in the spotlight about his not-yet-released tax returns, partially because of the irony that the candidate who has routinely lambasted the millionaires and billionaires is now, himself, a millionaire.

Sanders has routinely been ranked as one of the less-wealthy members of Congress — that is until he caught fire in his 2016 campaign. His 2017 Senate financial disclosure shows he was able to cash in on that bid. His book, Where We Go From Here, helped him make slightly more than $1 million overall for the year. That income included more than $880,000 from book royalties.

The self-avowed democratic socialist's reaction to his newfound wealth was rather ... capitalistic.

Sanders' earnings were a nearly fivefold increase from 2014, when he and his wife, Jane, made just under $206,000 combined, according to tax returns Sanders released during the 2016 presidential campaign.

Warren and her husband, Bruce Mann, made $906,000 combined in 2018. Mann makes about $400,000 as a professor at Harvard Law School. Warren, like Sanders, made most of her money because of her book, This Fight is Our Fight.

She reported getting about $430,000 in advances and royalties from its publication, according to Warren's most recent Senate financial disclosure. Warren gave away $50,128 to charity, or about 6 percent of her total household income.

Charitable giving is noteworthy with this field, considering many of their policy prescriptions call for making the wealthy pay more in taxes to fund many of their social programs.

Harris said she will release her tax returns "soon." During her 2016 Senate run in California, she released her 2015 taxes, which showed she and her husband made $1.2 million. Her husband, Douglas Emhoff, is a partner at the law firm Venable. She reported an estimated net worth of just under $400,000, according to her 2017 Senate financial disclosure.

Texans Beto O'Rourke and Julián Castro have said they will release their taxes but aren't committing to how many years they will put out.

"We're going to release them with more than enough time before the voting starts for people to take a look," Castro told The Texas Tribune, before noting that he would wait and see how many years others release before he does.

O'Rourke seems to be taking a similar tack. Asked in New Hampshire, per The Tribune, how many years he'd release, he replied: "That's a great question. I haven't thought about that. I do plan on releasing our tax returns, and I want to do that as soon as we can. Certainly last year, but we'll find out what the standard is and release that."

During O'Rourke's Senate bid, The Tribune dug into his finances with the release of the ex-congressman's U.S. House financial disclosure. It noted:

"O'Rourke and his wife listed assets that could range from $3.5 million to a little over $16 million, most of it coming from rental and commercial real estate, a stake in the candidate's software and technology company and his wife's trust fund. Their liabilities — mostly from their real estate holdings — total between $1.3 million and $5.7 million."