Accessibility links
Kim Tightens Leadership Over North Korea In Major Government Reshuffle The North Korean leader shunted aside a pair of long-serving senior officials and seated a newly elected parliament. The move is thought to be aimed at helping Kim ride out U.S. sanctions. 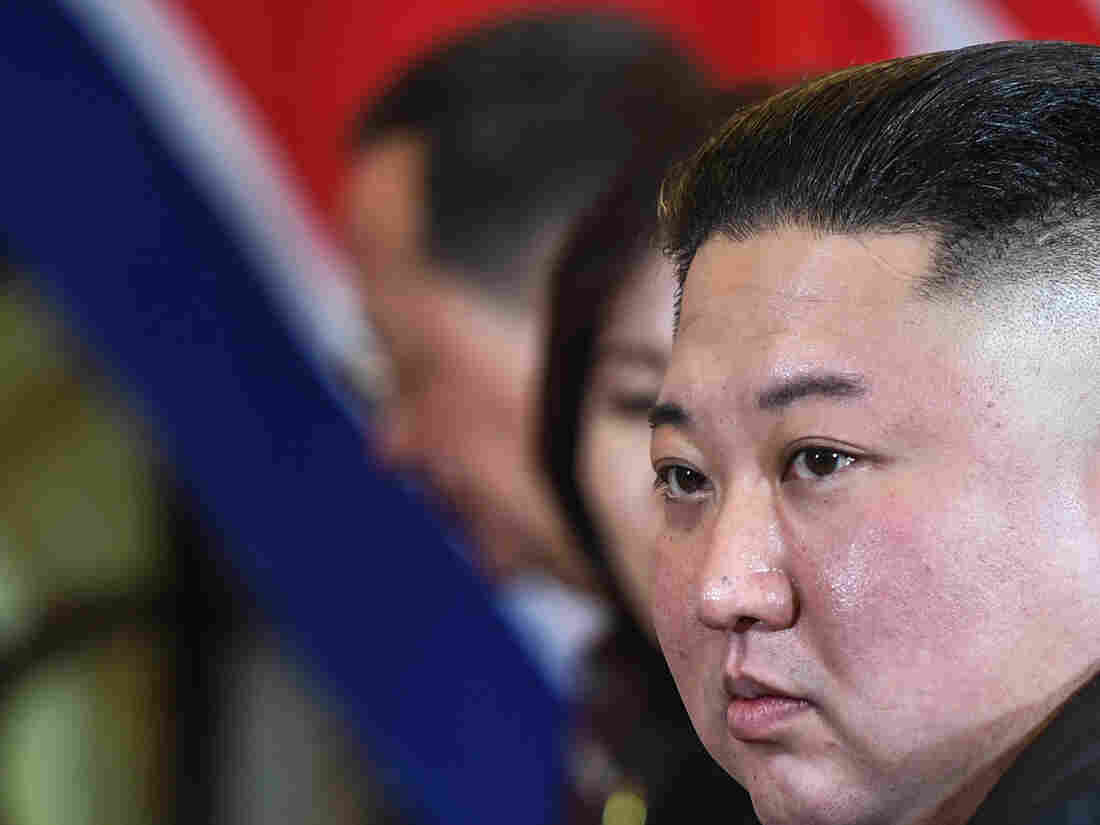 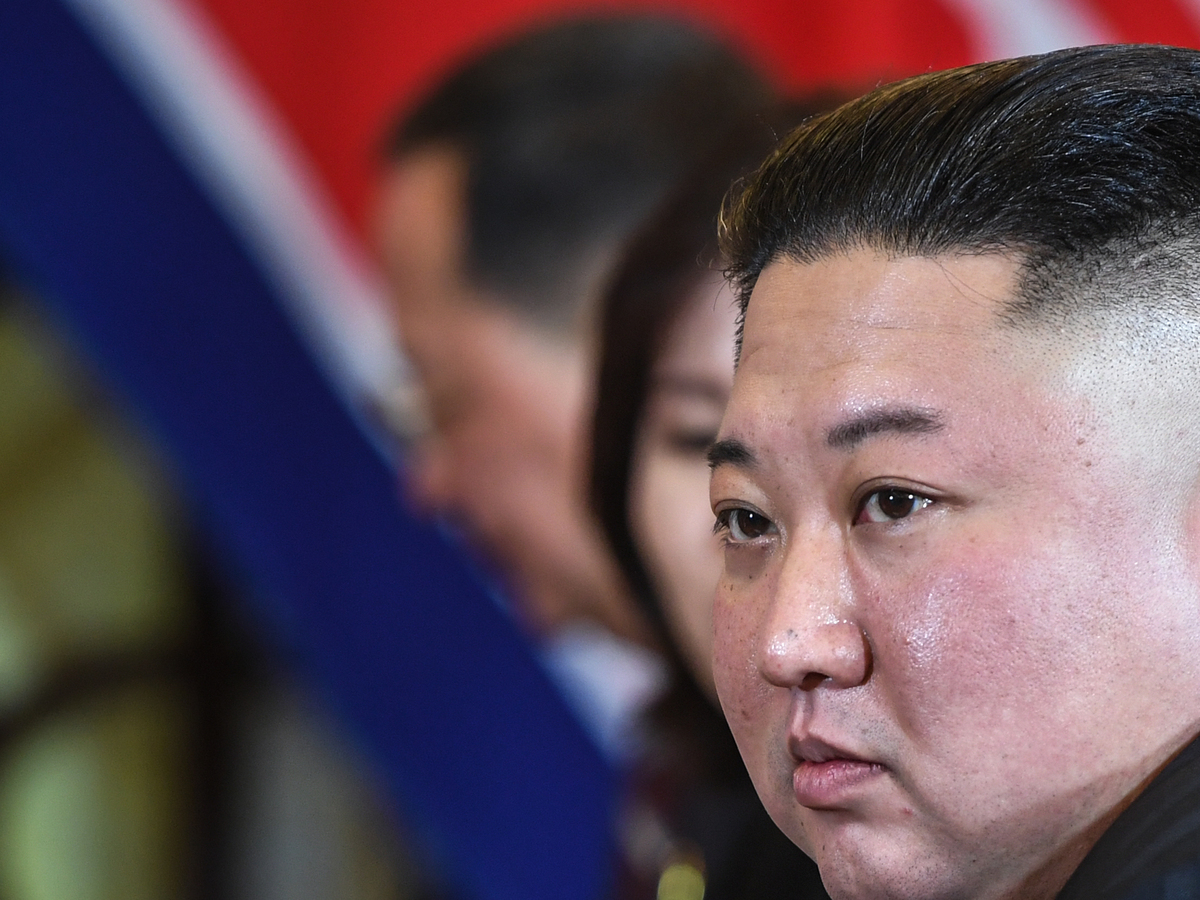 North Korea's leader Kim Jong Un listens during a meeting in February with President Trump at the second U.S.-North Korea summit in Hanoi.

North Korean leader Kim Jong Un signaled his impatience with the United States, saying he was willing to hold a third summit with President Donald Trump, but only if the U.S. comes up with mutually agreeable terms for a deal by the end of this year.

"We of course place importance on resolving problems through dialogue and negotiations," Kim told a session of parliament Friday, the Korean Central News Agency reported on Saturday. "But U.S.-style dialogue of unilaterally pushing its demands doesn't fit us, and we have no interest in it," he added.

"Anyway, we will wait for a bold decision from the U.S. with patience till the end of this year," Kim continued, "but I think it will definitely be difficult to get such a good opportunity as the previous summit." That summit, in Vietnam in February, ended without an agreement.

Kim has repeatedly pledged to give up his nuclear weapons, but insists that it must be done one step at a time, with sanctions relief in exchange for each step. He has rejected the U.S. position that he must denuclearize all at once, before sanctions are lifted.

Pyongyang has also indicated that if the U.S. is unwilling to compromise, it could give up on negotiations, abandon a self-imposed moratorium and go back to testing nuclear bombs and missiles.

Kim made his remarks at a session in Pyongyang of a newly elected parliament — the result of voting last month in which all candidates ran unopposed. Kim further cemented his grip on power at the session with a big reshuffle of the country's leadership.

His other remarks pointed to economic belt-tightening in an attempt to ride out economic sanctions — and perhaps the Trump administration, too – while hanging on to his country's nuclear arsenal.

At the meeting, Kim was re-elected as Chairman of the State Affairs Commission. That means he retains, as expected, his posts as leader of the ruling party, state and military.

He added an extra honorary title though, "Supreme Representative of all the Korean People," apparently for use in ceremonial and diplomatic occasions.

Long-serving officials such as 91-year-old Kim Yong Nam, the titular head of state, and Premier Pak Pong Ju, 80, were either retired or promoted to symbolic posts and replaced by younger officials.

On Wednesday, Kim he told ruling Workers' Party officials to make the country's economy self-sufficient, "so as to deal a telling blow to the hostile forces who go with bloodshot eyes, miscalculating that sanctions can bring (North Korea) to its knees," the official Korean Central News Agency reported.

Kim's comments and his reshuffle of the leadership appear to have two aims, says Park Hyeong-jung, a North Korea expert at the Korea Institute for National Unification, or KINU, a government think-tank in Seoul.

"One is to double down on economic self-reliance, through strengthened mobilization," Park says. "The second is to reinforce control over society." He explains that tighter control is necessary because anecdotal evidence out of North Korea suggests the economy is deteriorating under the pressure of sanctions, and citizens feeling the pinch are starting to gripe.

There are fewer merchants and fewer customers, for example, in the "jangmadang" or free markets, Park says. And North Korean officials, he adds, are becoming more "extractive" and predatory, demanding bigger bribes from merchants as a sort of tax on the markets.

Kim's expectations of tough times ahead seemed to anticipate President Trump's comments to visiting South Korean President Moon Jae-in on Thursday that he was unwilling to ease sanctions on the North, or make big concessions in nuclear negotiations.

Moon's trip to Washington was seen in Seoul as a crucial test of his role as mediator between North Korea and the U.S. South Korea's government had voiced hopes for a "good-enough deal," and an "early harvest." In other words, a smaller, interim deal to get the denuclearization ball rolling.

But Trump mostly rebuffed Moon, saying "at this moment, we're talking about the big deal. The big deal is we have to get rid of the nuclear weapons."

Trump did leave some wiggle room for incremental progress. "I'd have to see what the deal is," he told reporters. "There are various smaller deals that maybe could happen."

"The question is what Kim can be convinced to give up at a future meeting, in exchange for what he left on the table in Hanoi," says Leif-Eric Easley, an international relations expert at Ewha Womans University in Seoul.

Trump and Kim failed to reach a deal in Hanoi in February, Easley says, because North Korea's offer to dismantle its main nuclear facility at Yongbyon was not enough for a comprehensive deal, while Pyongyang's "asking price — the lifting of key U.N. Security Council resolutions — was unreasonably high."

Seoul says Moon's next step will be to seek a fourth summit with Kim Jong Un to try to broker a deal.

But whether Kim Jong Un will be interested in another meeting is unclear, says KINU's Park Hyeong-jung.

"Probably, North Korea would assess that South Korea does not have much leverage to change U.S. attitudes," he says, as evidenced by Moon's meeting Thursday with Trump, and therefore Moon's usefulness as a broker is questionable.