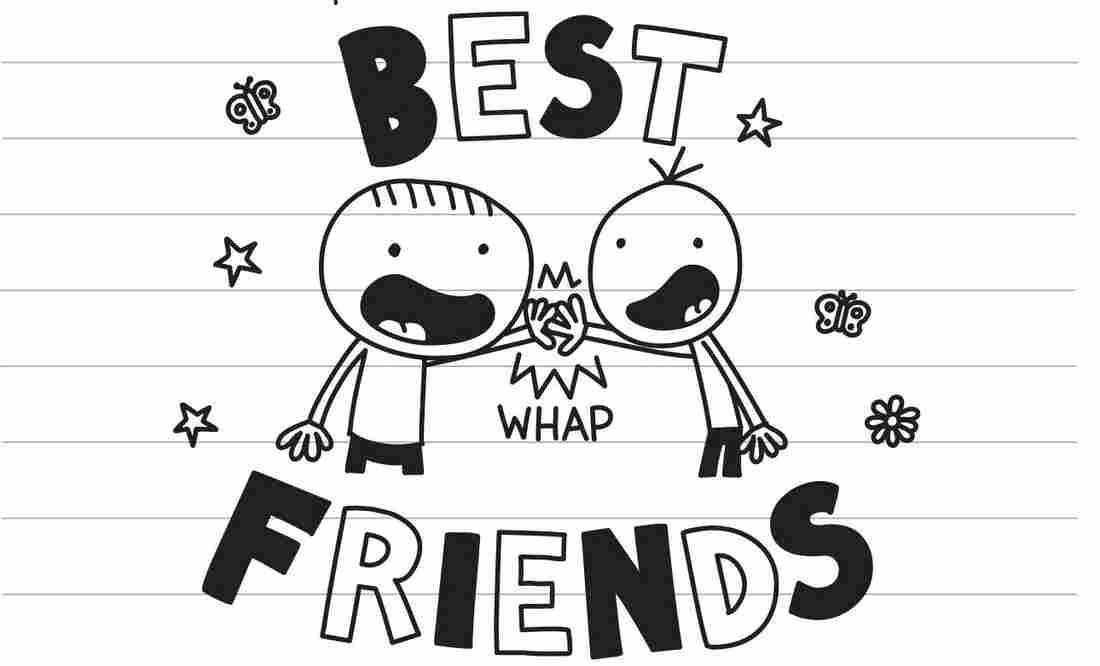 "The first thing you need to know about me is that I am Greg Heffley's best friend," Rowley Jefferson writes in his journal. "I know it says that on the cover but I wanted to mention it in case you missed that part." Jeff Kinney/Amulet Books hide caption 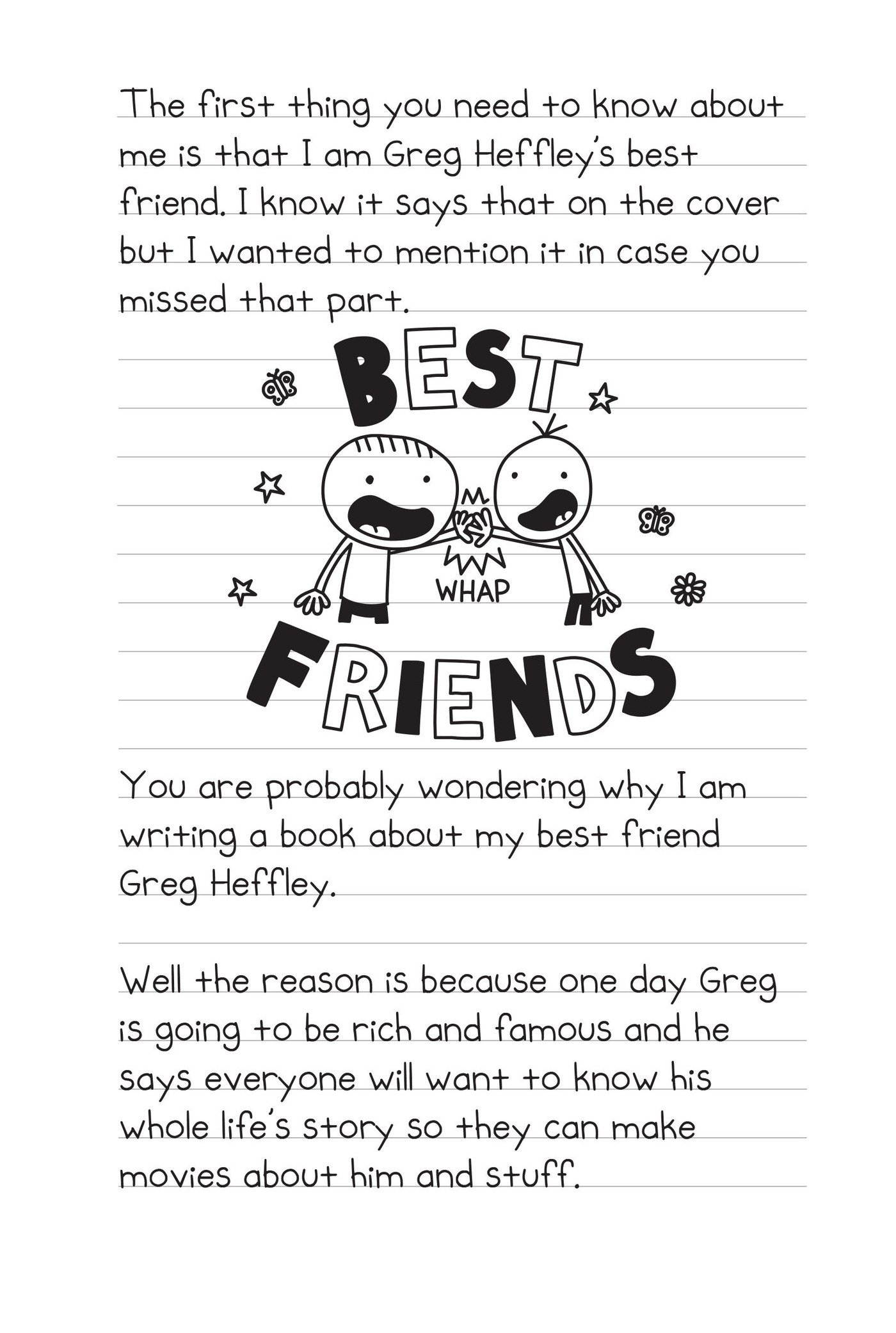 "The first thing you need to know about me is that I am Greg Heffley's best friend," Rowley Jefferson writes in his journal. "I know it says that on the cover but I wanted to mention it in case you missed that part."

When Jeff Kinney started working on Diary of a Wimpy Kid, he thought he was writing a comic for adults. "I always thought of comics as being for grown-ups, or maybe just for everyone," he says. After eight years of work, he finally showed it to an editor and learned: "I had actually written a children's series which was an absolute surprise to me."

That "surprise" has now sold 180 million copies. There are 13 installments of Greg Heffley's diary and now, Greg's best friend Rowley Jefferson, is getting his own book — Diary of an Awesome Friendly Kid.

Best friends get on each other's nerves and Greg can be pretty mean to Rowley. (Greg, after all, is a "comically exaggerated version" of the author — "He's sort of based on the worst parts of myself," Kinney explains.)

But Rowley remains loyal to his best friend — his superpower is kindness, Kinney says, "and that is a great superpower for today's day and age."

Greg doesn't necessarily deserve a friend like Rowley, Kinney says, "but he got one, so he's very lucky."

Kinney also counts himself as being quite lucky, having landed his dream job.

[Greg is a] kid who's in a rush to grow up. ... He's a kid who wants to get to that next level. He wants his bedtime to be a later. He wants a cell phone. He wants to be able to see that PG-13 movie instead of PG and he doesn't realize what a good thing childhood is — what a good gig it is.

Rowley is really quite the opposite. He loves being a kid. He's not in a rush to grow up and ... he's very pure.

On people always rooting for Rowley

The thing that I've learned from the four [Diary of a Wimpy Kid] movies and from the musical that we put together is that the audience is always rooting for Rowley to win. And you know — as a person who Greg is based upon — I'm always like, why are they rooting for this guy? So I decided to embrace that. He's a really positive kid. He's really incorruptible in a way.

On writing for Rowley vs. Greg

It's sort of easy for me to write for Greg, and I wasn't so sure that I could write for this other character who was more naïve, and innocent, and positive. But I found it to be really refreshing. 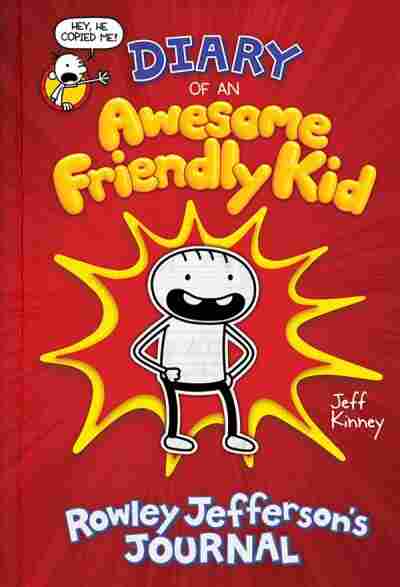 Diary of an Awesome Friendly Kid

On what he's trying to teach kids through Greg's character

I'm really not trying to moralize to kids at all. I think Greg is sort of like a stand-up comedian who gets up on stage and talks about his own experiences but it's through the prism of weakness and human failing. He wouldn't be that interesting of a character if he was always heroic. ... Greg is always frowning on the covers of the books. I think he's more interesting because bad things happen to him. ... I know lots and lots of Gregs. I think we've all got a little bit of Greg in us.

I wanted to be a newspaper cartoonist. That was my goal: To be on the pages with ... ["Peanuts" creator] Charles Schulz and ["Calvin and Hobbes" creator] Bill Watterson and ["The Far Side" creator] Gary Larson. That was my goal and I tried at it for a few years — for about three years tried hard, got nothing but rejections. And then I had the idea to get my comics into books which was really kind of different. Back then, there weren't a lot of books with comic strip DNA in them. So I wanted to invent something new. I worked on it for a long time. I worked on it for eight years before I showed it to anyone.

On running a bookstore

I have a bookstore called An Unlikely Story in Plainville, Massachusetts — and it's great. ... It's so fun to invite lots of different authors to the bookstore. We must have two or three nationally famous authors in our bookstore each week and I love to sit in the audience and learn from them.

I'm very, very, very lucky to be in this privileged position that when I write a book, it reaches millions of kids. That's something I really embrace. I try to do my best by kids, and to try to write the funniest books possible.

Mayowa Aina and Barrie Hardymon produced and edited this interview for broadcast. Beth Novey adapted it for the Web.