Accessibility links
Democratic Candidate Pete Buttigieg Leans On Record South Bend Mayor On the campaign trail he talks a lot about how being mayor since 2012 of the once-industrial city in northern Indiana has prepared him to be president of the United States. 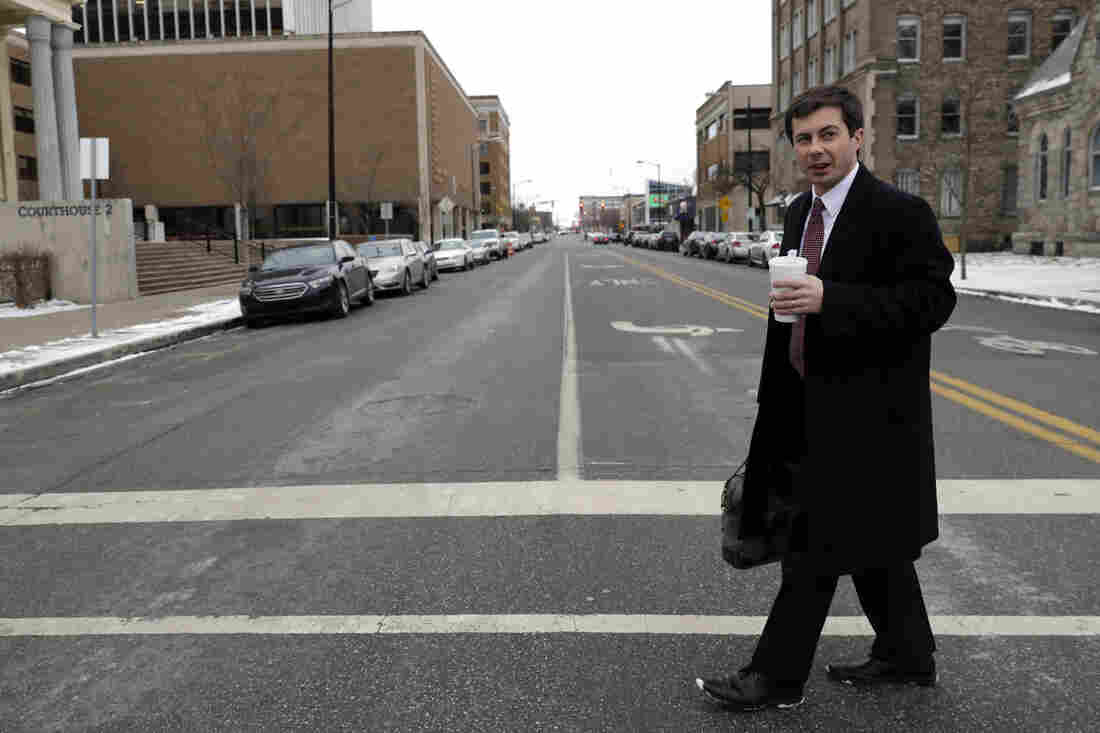 Mayor Pete Buttigieg in downtown South Bend, Ind., in January, 2019. First elected in 2011, Buttigieg has based his presidential candidacy, in part, around the revival of South Bend that he's helped engineer. Nam Y. Huh/AP hide caption 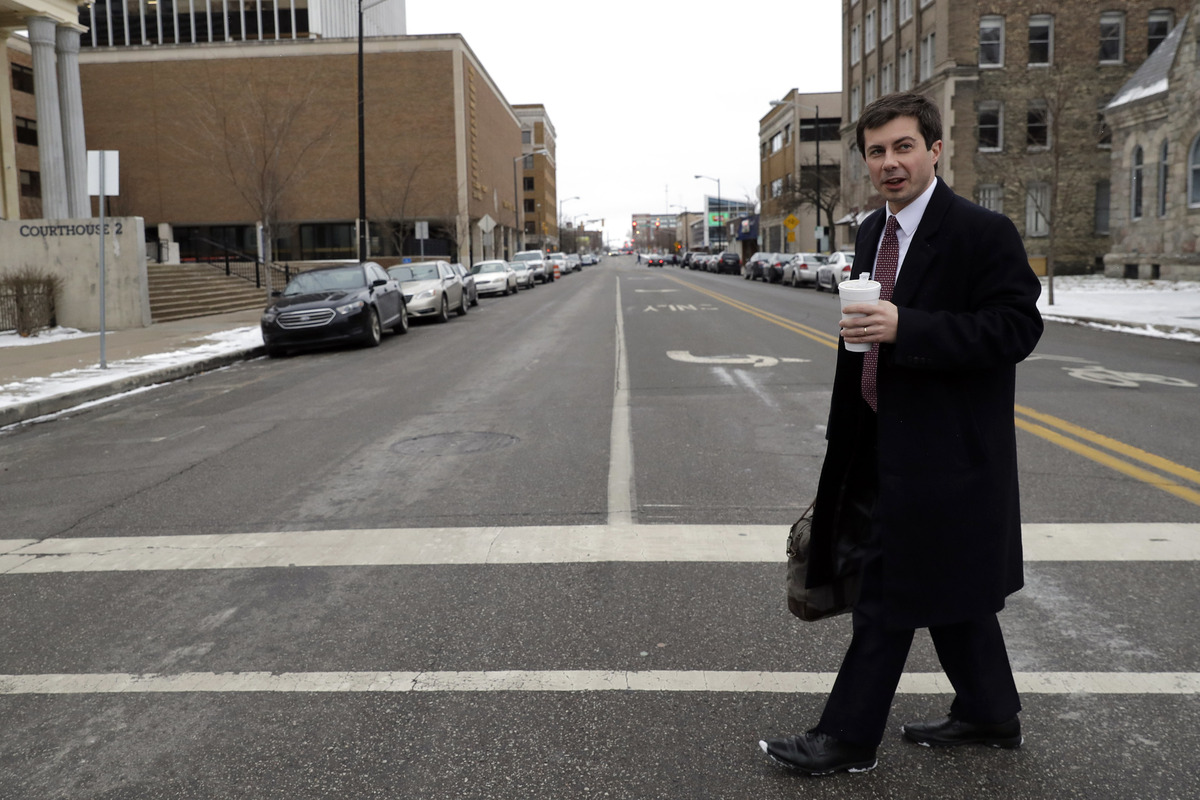 Mayor Pete Buttigieg in downtown South Bend, Ind., in January, 2019. First elected in 2011, Buttigieg has based his presidential candidacy, in part, around the revival of South Bend that he's helped engineer.

When Molly Hewitt left South Bend, Ind., for college, she didn't think she'd return to live there again. Since the 1960s, the city had suffered the same brain drain that plagued many other Midwestern cities faced with industrial decline.

"The goal was always to be successful enough that you don't have to come back to South Bend," she said.

But while she was away, things were turning around. Hewitt's parents kept her in the loop and she decided to give another chance to the city led by Democratic mayor Pete Buttigieg.

"I came back, honestly because of Pete and I've seen a lot of my friends do that and a lot of people who didn't grow up here that want to come to South Bend," she said. Now Hewitt is 23, living in South Bend and volunteering for the campaign of James Mueller, the candidate Buttigieg endorsed to replace him in this year's mayoral election.

Buttigieg, 37, officially announced his candidacy for the presidency on Sunday. On the campaign trail he speaks a lot about how being mayor of South Bend since 2012 has prepared him to be president.

"We transformed the trajectory of our city," Buttigieg said in an interview on Morning Edition in January. "This is a community that was written off as dying at the beginning of this decade. Now it's growing again."

South Bend's population is up more than 1,000 people since 2010 following decades of hemorrhaging tens of thousands of residents.

Investment in the city's downtown, public private partnerships, economic development — including turning the long vacant Studebaker auto plant, which closed its doors in 1963, into a tech hub — have been credited with the change.

"There's a definite difference in how it used to be versus how it is now," said Jake Mitchell, who went to high school with Buttigieg. "Just kind of an intangible feeling. You know, everything seems nicer, cleaner."

But others in this once-industrial town feel left out, despite what Buttigieg has done.

"You're doing a lot for downtown and you're building hotels and apartments that people who are native to this town can't even afford, even the people with college degrees," said activist Lisa DeBerry. "So it's like, who are you developing that for?"

Early in his first term Buttigieg set a goal to knock down 1,000 blighted houses in a thousand days - which the city exceeded.

"And that's certainly helped," said Jack Colwell, a long time columnist for the South Bend Tribune. "Neighborhoods where there had been these vacant houses they were drug houses, gangs used them, they were eyesores."

A lot of the housing stock in South Bend comes from the heyday of the Studebaker plant, which employed thousands of workers.

Now, most of the deteriorated neighborhoods are historically minority and lower income. And when the houses started coming down, teacher Regina Williams-Preston says she stepped up and got involved with others there.

"The people rose up and said, 'Hey, we need help out here. Don't knock down our communities, give us help. It's our tax dollars, invest in us,'" she recalled.

"And that's when we got two million dollars of investment in home repair and two million more invested in new construction for affordable homes," added Williams-Preston, who is now a council member and is also running to replace Buttigieg as the mayor of South Bend when his second term ends Dec. 31.

Williams-Preston said she felt that working with Buttigieg as a mayor, part of the job was preparing him for the next step.

Jason Critchlow, another mayoral candidate, who used to be the county Democratic Party chair, said Buttigieg didn't turn the city around on his own.

"I think there's a feeling here that it's disingenuous to pretend that one person had solely to do with any of the progress made here in South Bend," Critchlow said. "I think there's been literally decades of public servants that have gotten us to where we are today."

A Look At How Pete Buttigieg Is Reaching Out To Voters

And it's still far from a complete turnaround. More than a quarter of the population still lives at or below the poverty line, compared to the national average of around 14 percent.

DeBerry, the activist, says Buttigieg shouldn't become president."That's like a mother having her own children and not taking care of them and then wants foster children," she said, expressing a feeling she says is shared by many who were left behind by the city's transformation. "It's like no, we're not going to give you more."

Williams-Preston says she hopes that if Buttigieg becomes president, he would take the lessons he learned in South Bend forward.

"You could really be like the president of the United States one day. It's up to us, like the people of South Bend to make sure you're ready for that task."

Buttigieg was an improbable mayor — he was only 29 when he was first elected. And he's hoping his experience since then in South Bend will land him in another improbable place - the White House.