Accessibility links
Tiger Woods Rises Again — And Sponsors Are Celebrating His Resilience Woods' historic victory Sunday at the golf Masters Tournament shows the continued earning power of a player who was dropped by many of his sponsors over the course of a tumultuous decade.

Tiger Woods Rises Again — And Sponsors Are Celebrating His Resilience

Tiger Woods Rises Again — And Sponsors Are Celebrating His Resilience 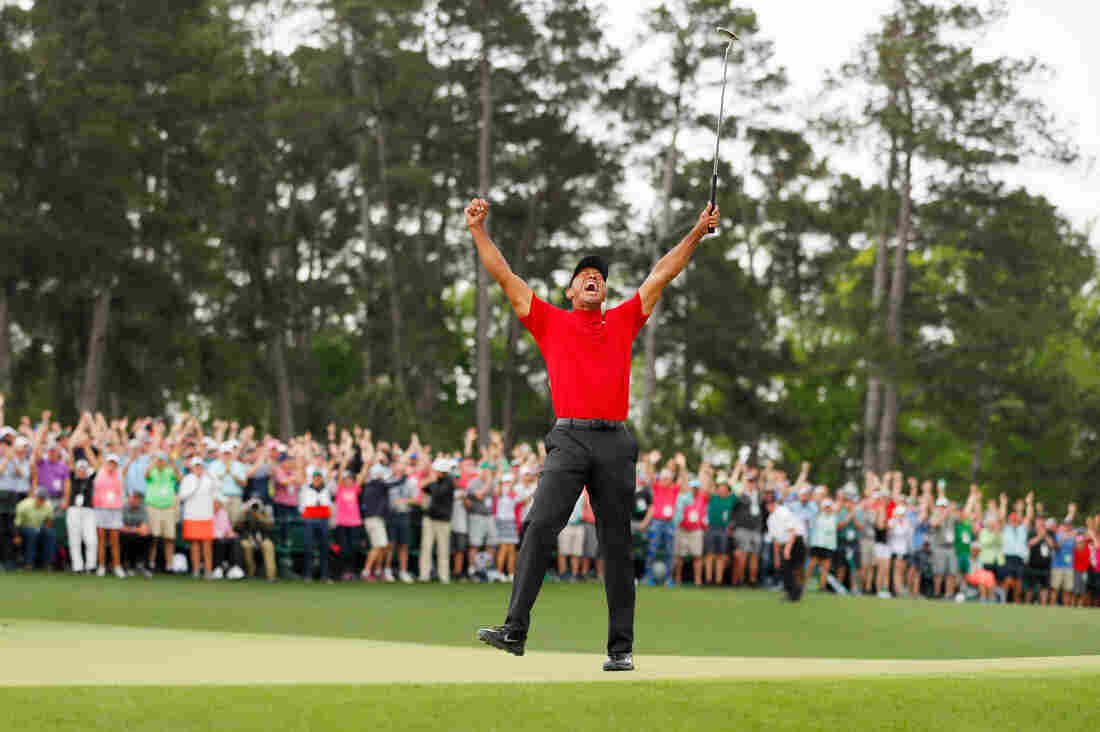 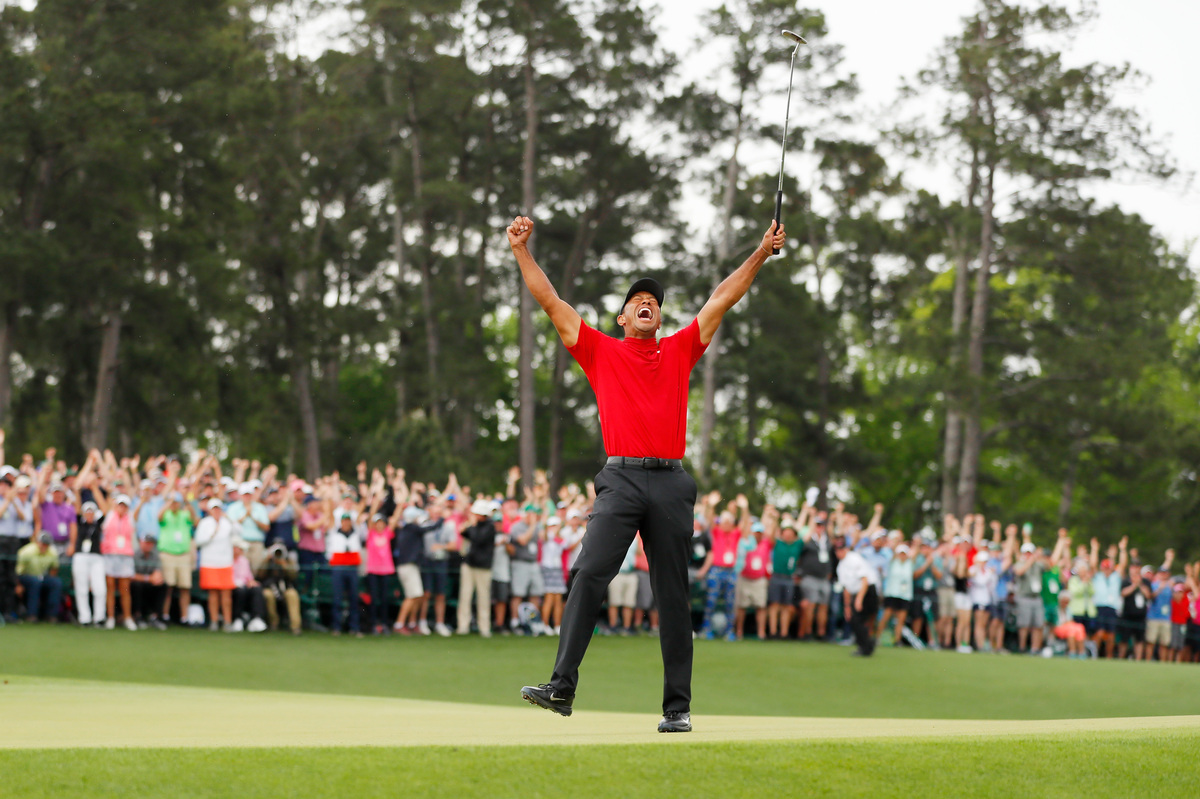 Tiger Woods celebrates after making his putt on the 18th green to win the Masters at Augusta National Golf Club on Sunday in Augusta, Georgia.

Tiger Woods' historic comeback victory Sunday at the The Masters Tournament shows the enduring star — and earning — power of a player once dropped by many sponsors because of his problems on and off the golf course.

"It's crazy to think a 43-year-old who has experienced every high and every low and has just won his 15th major .... is chasing the same dream as a 3-year-old," a new Nike ad says.

President Trump announced Monday that he will award Woods the Presidential Medal of Freedom, the nation's highest civilian honor, "because of his incredible Success & Comeback in Sports (Golf) and, more importantly, LIFE."

At 43, Woods is the second-oldest winner of the Masters. In 1986 Jack Nicklaus won The Masters for a sixth time when he was 46.

And after Woods' momentous victory Sunday, multiple sponsors are celebrating his resilience. At the end of the Nike ad, a very young Woods is seen on camera saying: "I'm going to beat Jack Nicklaus."

Woods now has 15 major wins, compared to 18 for Nicklaus. "I felt for a long time that he was going to win again. ... He's got me shaking in my boots, guys," Nicklaus told the Golf Channel after Tiger's victory.

TaylorMade, a golf club manufacturer and another sponsor of Woods, is promoting the hashtag "#NeverDone" – a reference to the player's longevity.

Tiger last won the Masters Tournament in 2005 – the longest period ever between wins in that tournament. Since then, he's gone through a high-profile sex scandal and major injuries.

"I had serious doubts after what transpired a few years ago. I couldn't walk, I couldn't sit, I couldn't lay down, I really couldn't do much of anything," he told reporters. "Luckily I had the procedure on my back, which gave me a chance at having a normal life. ... The body's not the same as it was a long time ago, but I still have good hands."

According to Forbes, in 2009 he brought in $105 in endorsements and appearance fees, compared to $37 million in 2017. As Bloomberg noted, many top sponsors such as AT&T, Accenture, Gillette, Gatorade ended their relationships with him following the scandals. TaylorMade is a newer sponsor, as is golf ball manufacturer Bridgestone Golf and drink company Monster Energy.

But Nike, which has been a sponsor since 1996, has stuck by him. And that has turned out to be lucrative.

According to sponsorship analytics firm Apex Marketing Group, the brand exposure that Nike got from Woods during the final round of this tournament was worth more than $22.5 million. They calculated that branding on his bag from Monster Energy and on his golf balls from Bridgestone Golf was also worth more than $1 million total.

The amount of exposure that Woods produced for Nike in the final round is nearly double the $12 million that Apex estimates Nike gained last year from Masters winner Patrick Reed.

That's largely due to the intense focus the TV broadcast placed on Woods, said Apex president Eric Smallwood. "Pretty much every hole, every time he hit the ball, they were showing him ... or the Nike logo," he told NPR.

Nike has drawn down its relationship with Woods over the years – now concentrating on his apparel rather than balls or clubs.

But Smallwood doesn't see the company ever dropping him. "I think Nike will stick with him until he stops playing golf, in some capacity. I don't foresee that ever going away," he says.

From a branding perspective, he says, Woods' story has obvious appeal. "This is coming back from not even playing and winning the Masters. It's got a lot of good story lines to it," he says, that brands would want to hold onto. 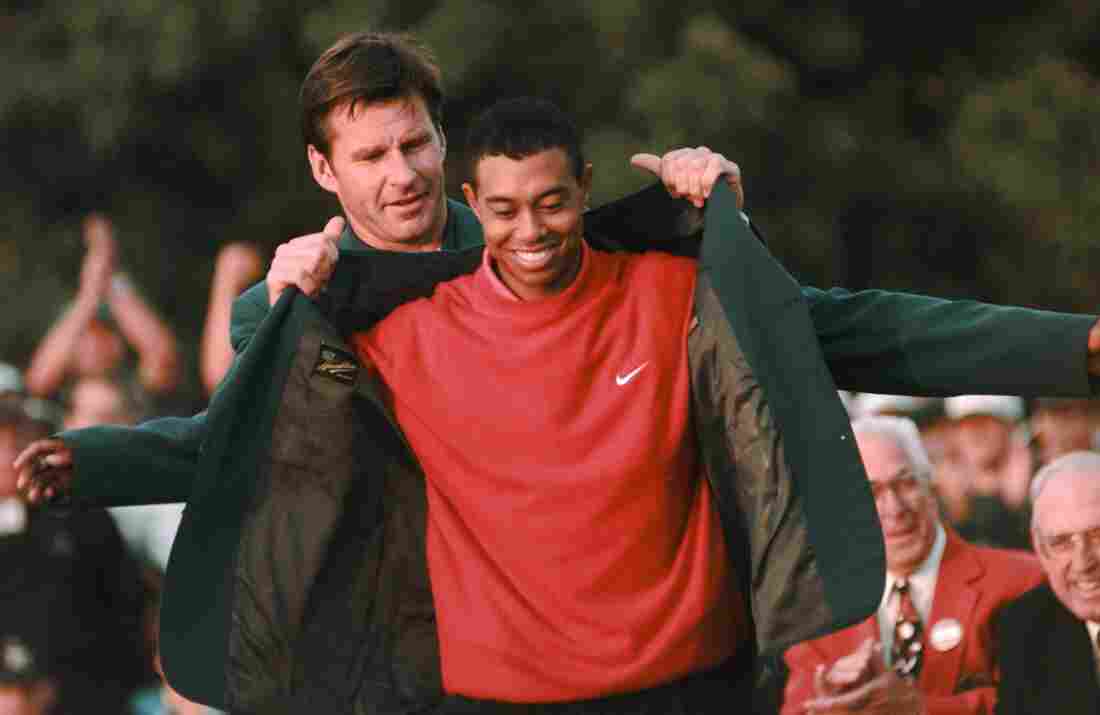 Tournament officials were eagerly touting the moment: "No man in golf has ever been the subject of more interest or speculation than has Tiger Woods. No man in the game has inspired more opinion, and his story is well known."

A Forbes analysis asks, now that Tiger is on top again, how his branding might change:

"Maybe the most interesting question involving the return of Woods is this: Who will become the first major brand to take a risk on him? And will that open the door to getting Tiger back on top in terms of endorsement deals?"

Woods himself appears introspective. After his first-ever Masters win in 1997, he hugged his father, who died in 2006. This year, he shared an emotional hug with his two children and his mother. He reflected on how this win could change how his kids see him and his place in the professional golf.

"I think the kids are starting to understand how much this game means to me and some of the things I've done in the game. Prior to this comeback, they only knew that golf caused me a lot of pain," Woods told reporters. "We're creating new memories for them."