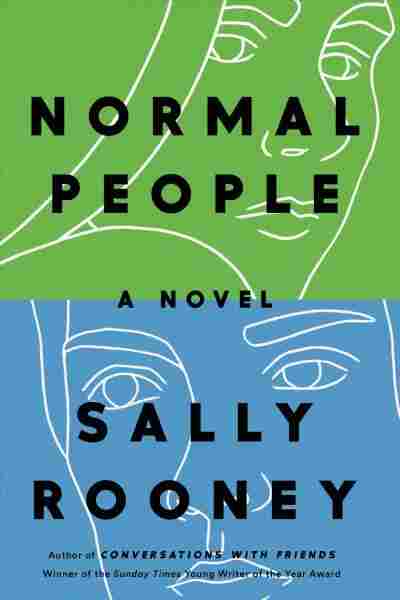 Such heaps of praise have piled up for Irish writer Sally Rooney, there's a danger of suffocation from avalanching expectations. At 28, the Trinity College Dublin graduate has published two novels, Conversations with Friends (2017) and Normal People, both to the sort of excitement that more typically greets new hand-held electronic devices.

I'm happy to report that Rooney's novels are exciting hand-held devices — new books that bring a 21st century perspective on insecurity to the coming-of-age narrative. Normal People is a compulsive, psychologically astute will-they-or-won't-they love story involving two of the most sympathetic people you're liable to meet between covers. Although hailed as a voice of millennials, Rooney offers plenty to appeal to readers across genders and generations.

Marianne Sheridan and Connell Waldron meet as teens in County Sligo, Ireland. Both are star students, but Marianne is an outcast raised in material wealth and emotional poverty by her widowed mother, a lawyer who apparently deems aggressive behavior from men — including her abusive late husband and nasty son — acceptable. Lower-middle-class Connell lives way across town with his unwed mother, who had him in her teens and works as a cleaning woman for the Sheridans. Ironically, Connell has been better nurtured by this wonderful woman, whose education was derailed by his birth.

Marianne and Connell fall into an intense, complicated relationship that's repeatedly muddled by secrecy, miscommunications, and anxiety about their place in the social hierarchy. Rooney's novel tracks them closely over four years, between 2011 and 2015. In high school, Connell worries about eroding his social standing if his association with unpopular Marianne becomes known. At Trinity College Dublin, both Marianne and Connell are considered "culchies" — hicks — but her social star rises, while he attains "the status of rich-adjacent" only through his connection with her.

'Normal People' is a compulsive, psychologically astute will-they-or-won't-they love story involving two of the most sympathetic people you're liable to meet between covers

Normal People shares many similarities with Conversations with Friends, which is narrated by a young woman whose initiation into adulthood involves a troubled adulterous affair that impinges on her closest friendship and is further exacerbated by a painful physical condition (endometriosis). She feels — like Marianne and Connell in Normal People -- that she deserves to suffer. But in her second novel, Rooney demonstrates that she is gender blind when it comes to insecurities. Normal People's third person narrative, which alternates convincingly between Marianne's and Connell's points of view, wryly underscores the gap between their perspectives, even at the best of times.

The novel also deftly yo-yos between periods of deep communion (with beautifully wrought sex) followed by painful misunderstandings that compound her characters' insecurities. "I don't know why I can't be like normal people ... I don't know why I can't make people love me," Marianne says, well into their on-again-off-again relationship, after confessing that she never told Connell about her miserable home life because she was afraid he would think she was "damaged or something." Quickly switching perspectives, Rooney writes, "But he always thought she was damaged, he thought it anyway. He screws his eyes shut with guilt."

Among Rooney's abiding concerns are the fluctuating power dynamics in relationships. Issues of class, privilege, passivity, submission, emotional and physical pain, kindness, and depression all come into play. Her focus is on young adults as they struggle to navigate the minefields of intimacy against the backdrop of an economically uncertain, post-recession world threatened by climate change, political upheaval, and questions about the morality and viability of capitalism. Rooney's characters may be academically gifted, but they aren't sure how they want to live or what they want to do with their lives. In response to emotional injury, they sometimes seek physical pain. When overwhelmed, they detach. A crippling sense of unworthiness chafes against feelings of intellectual superiority.

Rooney's dialogue, like her descriptive prose, is slyly ironic, alternately evasive and direct, but always articulate. It cuts to the heart. She seems remarkably comfortable writing about sex — even uncomfortable sex — and she seamlessly integrates well-crafted texts, emails, and Facebook posts into her narratives like the digital native she is. Yet while Rooney may write about apparent aimlessness and all the distractions of our age, her novels are laser-focused and word-perfect. They build power by a steady accretion of often simple declarative sentences that track minuscule shifts in feelings.

At one point, Connell reflects on the serendipity of his connection with Marianne: "At times he has the sensation that he and Marianne are like figure-skaters, improvising their discussions so adeptly and in such perfect synchronisation that it surprises them both. She tosses herself gracefully into the air, and each time, without knowing how he's going to do it, he catches her."

It's a lovely image that also captures the graceful feat that Rooney pulls off in this novel. Although frequently heartbreaking, Normal People isn't bleak. The brave determination of Rooney's characters to reach out and try to catch each other with no guarantee of success — and to open themselves to "moments of joy despite everything" — is ultimately hopeful.