Accessibility links
'Late Bloomers' Makes The Case For Patience In A Culture Focused On Early Success In an interview with NPR about his new book Late Bloomers, Forbes magazine publisher Rich Karlgaard talks about the idea that early achievement is not necessary for lifelong success. 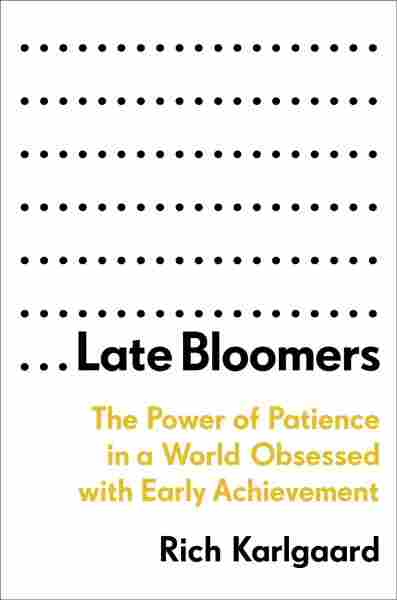 The Power of Patience in a World Obsessed With Early Achievement

Read an excerpt of Late Bloomers

It seems like every week a video shared on social media shows some incredibly early achiever: a 5-year-old playing a piano concerto; an 11-year-old college graduate; the preteen sports prodigy.

But in the new book Late Bloomers: The Power of Patience in a World Obsessed with Early Achievement, Forbes magazine publisher Rich Karlgaard isn't so interested in young achievers. Instead, Karlgaard looks at those for whom success comes later — in their 30s, 40s, 50s and beyond — in a culture obsessed with early achievement. He makes the case that while we can surely celebrate the phenoms, the premise that early blooming is necessary for lifelong success is flawed.

"Some people are naturally gifted, focused prodigies. I have nothing against them — in fact, I applaud them," he tells NPR. "The problem arises when we think that's the path that's appropriate for all kids, teens and young adults."

If you look at what neuroscience has to say — and there was a great 2015 study, and they looked at: What do we do best during each decade of our life? And sure enough ... our rapid synaptic processing speed and working memory peak in our 20s. But then in our 30s, 40s and 50s we begin to develop a whole range of skills we didn't have before: executive functioning, management skills, compassion, equanimity. ... Wisdom really begins to kick in in our 50s, 60s and 70s.

On the obsession with early success

100 Years Of Woody Herman: The Early Bloomer Who Kept Blooming

Where I live in Silicon Valley, it's kind of ground central for putting pressure on teens and young adults because there are so many examples of young adults who have gone out and done tremendous things — whether it's the two founders of Google, whether it's Mark Zuckerberg at Facebook. The pressure that this is putting on kids, teens and parents is incredible. So this pressure cooker and this idea that we're putting kids on a conveyor belt and they're supposed to trade their youthful curiosity for determined focus is having, on the whole, I believe a very bad outcome — and that's why I wanted to start a national conversation about this.

On how he sees ambition

On Charles Bradley: Sweaty Hugs And Screams 'From The Center Of The Earth'

I think ambition is good. Some people will really respond to ambition. There are people who — and this characterizes most early bloomers, I think — they're naturally ambitious, they're naturally competitive, they like to win, they like to impress people, they like to run up the score. ... Late bloomers tend to be more of the explorer type. I do poorly when I'm under competitive pressure. I do much better when I explore my curiosity. It's the difference between feeling being pushed — which I don't like and I think a lot of people don't like — versus being pulled by some vision and dream and higher purpose.

Catherine Whelan and Jessica Smith produced and edited this story for broadcast. Heidi Glenn adapted it for the Web.