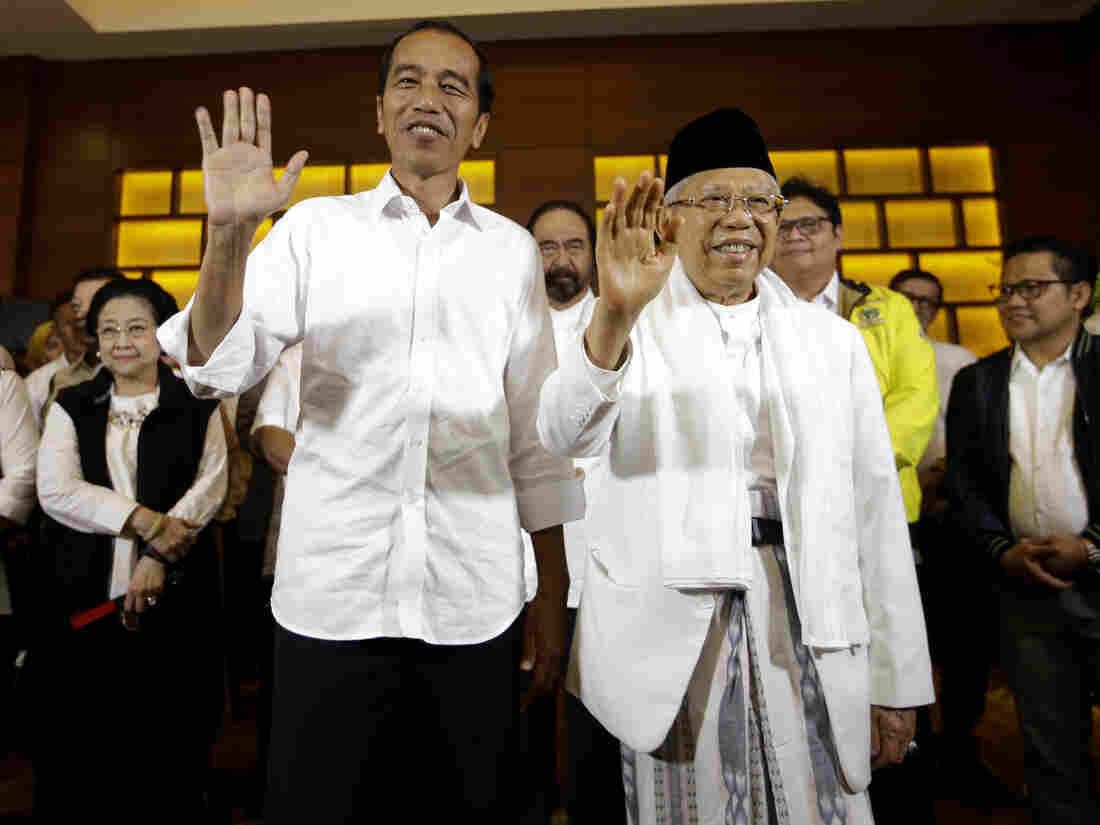 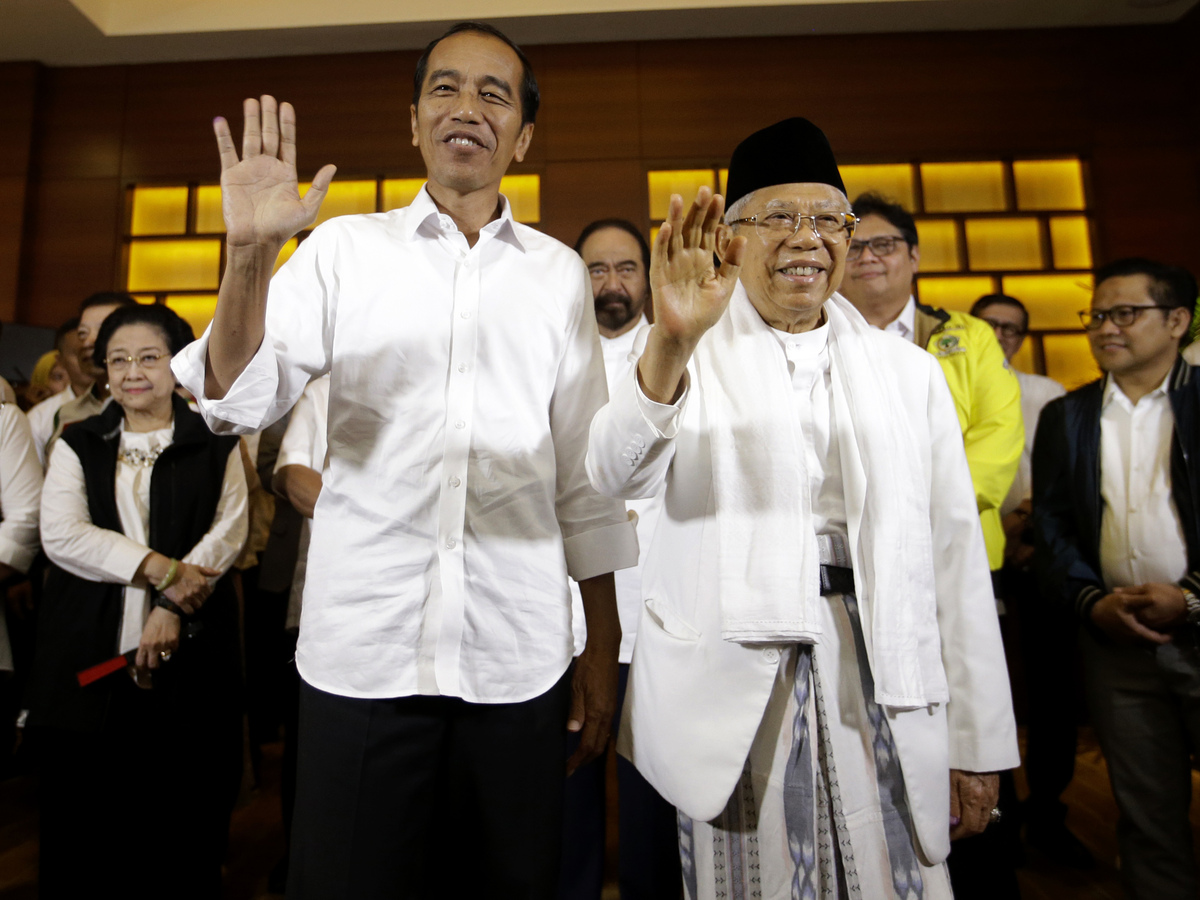 Indonesian President Joko Widodo (left) and his running mate, Ma'ruf Amin, wave to journalists after a news conference in Jakarta, Indonesia, on Wednesday.

Early election results from Indonesia show the incumbent president easily securing victory against his old-guard challenger in the world's most populous Muslim-majority country.

President Joko Widodo, a former furniture businessman and political moderate, was up against former military general Prabowo Subianto. Subianto was the son-in-law of Indonesia's longtime dictator Suharto, who was ousted in 1998.

The results are not yet official – they're "quick counts" from multiple polling organizations, which show that Widodo won about 54 percent of the vote.

"From the indications of the exit poll and also the quick counts, we can see it all, but we must be patient to wait for the official counting from the Election Commission," the president told supporters after voting wrapped up, according to The Associated Press. He called for unity. Official results are expected in May.

Subianto has not yet conceded, the wire service adds. His campaign alleges some irregularities — but, as the AP notes, "analysts say the claims are absurd and designed to undermine the election."

During his campaign, the wire service says, he "ran a fear-based campaign, highlighting what he sees as Indonesia's weakness and the risk of exploitation by foreign powers or disintegration." 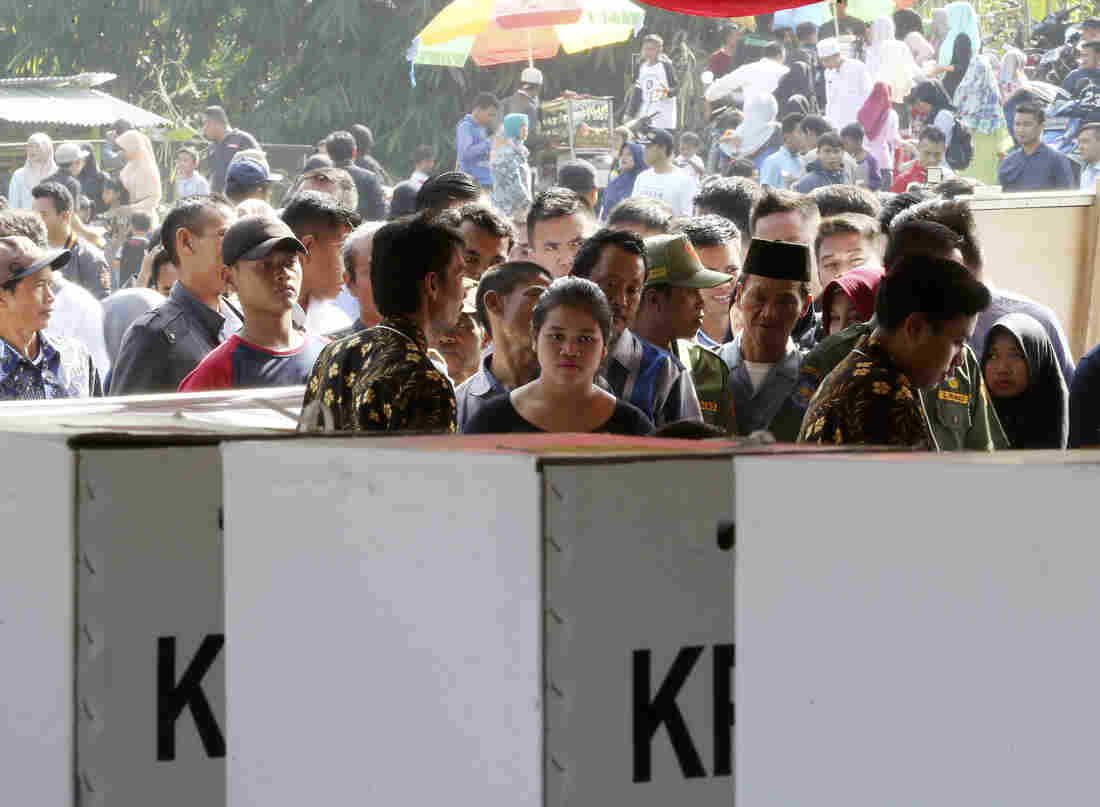 People queue up to vote at a polling station in Bogor, Indonesia, on Wednesday. Achmad Ibrahim/AP hide caption

Indonesia's rising religious conservatism played a major role in this race. Widodo named a religious cleric with some hard-line views as his running mate.

"That's a move that really jolted some of his supporters," NPR's Julie McCarthy reported from Jakarta. "Widodo moved to the right in a bid to neutralize the allegation that came up against him that he's not Islamic enough."

Human Rights Watch has said that the cleric, Ma'ruf Amin, "has been central to some of the most intolerant elements of Indonesian contemporary religious and political culture, so fear of the negative impact he could have on the rights and safety of religious and gender minorities is well founded."

McCarthy says the president, commonly known by his nickname Jokowi, will face a challenge in the coming term: "He faces the daunting task of balancing an increasing Islamization with his more secular goals of building roads and strengthening his country's young workforce."

The power of the country's clerics has been visible during the campaign – for example, at a rock concert campaign event, the heavy-metal-loving incumbent made sure to thank clerics for supporting him, as McCarthy reported.

For example, after pressure from hard-liners and street protests, a former governor of Jakarta who is Christian was jailed for blasphemy against Islam.

The BBC has reported that the two candidates' policy platforms were not especially different. "Therefore, the only contrast they can draw is by showing their religious credentials," Made Supriatma, an Indonesia expert at the ISEAS-Yusof Ishak Institute in Singapore, told the broadcaster.

The vote itself was a massive logistical undertaking for a country made up of some 17,000 islands spread across three time zones. About 193 million people could vote in some 800,000 polling stations, the AP reported. Parliamentary and regional elections also took place on Wednesday.