Accessibility links
Mueller Report:Trump Tried To Stop Investigation Fearing Presidency Over The 448-page document, released Thursday after nearly two years of investigation, depicts a president distraught by the special counsel's inquiry — and aides thwarting his attempts to stop it. 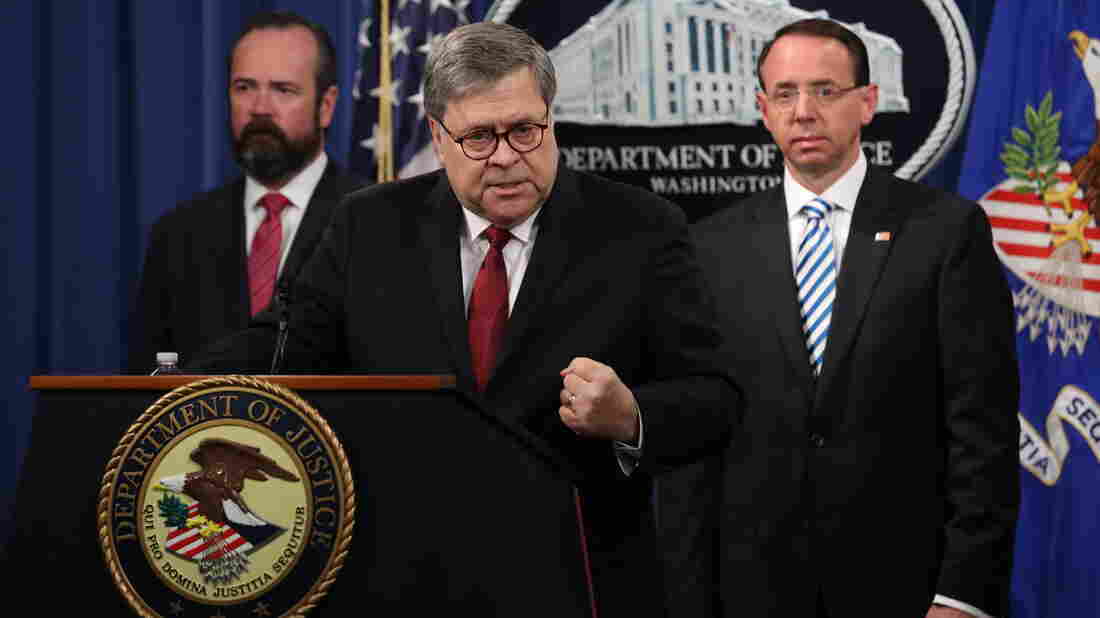 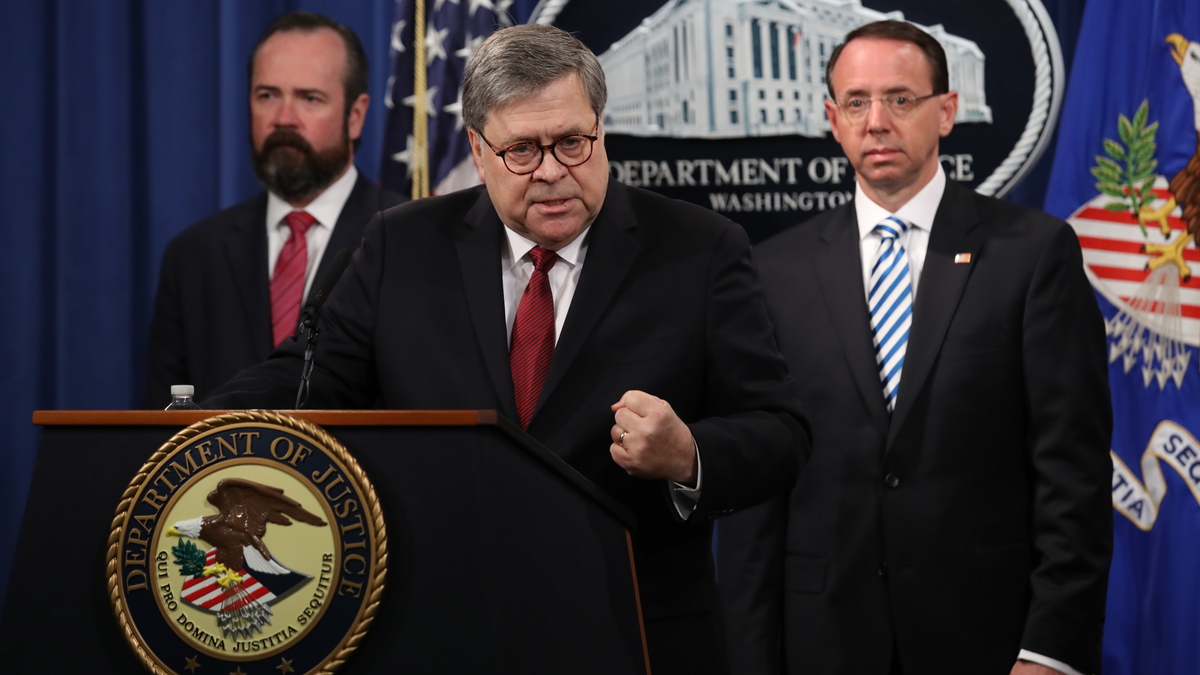 When President Trump learned two years ago that a special counsel had been appointed to investigate Russian interference in the 2016 election, he was distraught.

Trump "slumped back in his chair and said, 'Oh my God. This is terrible. This is the end of my presidency. I'm f***ed,' " according to the report by special counsel Robert Mueller that was released Thursday in redacted form.

The president's prediction, written down by an aide and contained in the 448 pages of the Mueller report, has not come to pass. But Mueller's 22-month investigation did turn up numerous instances of the president trying to prevent investigators from carrying out their mandate — and it suggests that he might have been successful were it not for his own aides ignoring his directives.

As a result, the Mueller report's conclusion on whether the president obstructed justice was decidedly noncommittal.

"If we had confidence after a thorough investigation of the facts that the president clearly did not commit obstruction of justice, we would so state," the report reads. "Based on the facts and the applicable legal standards however we are unable to reach that judgment. The evidence we obtained about the president's actions and intent presents difficult issues that prevent us from conclusively determining that no criminal conduct occurred."

Mueller's doorstop report thumped to Earth on Thursday after much anticipation. 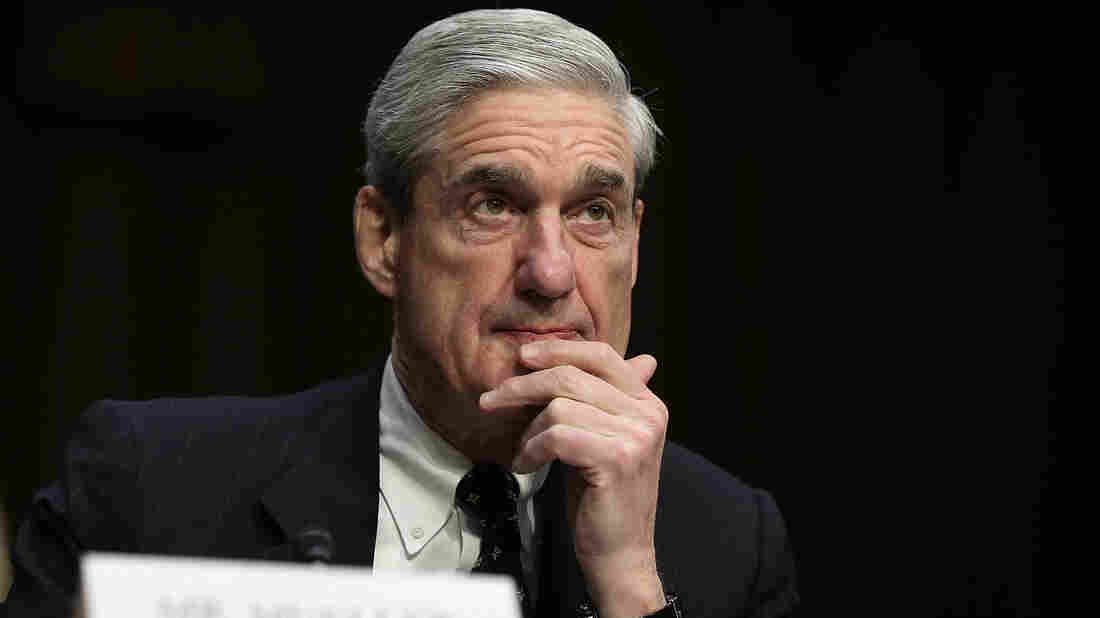 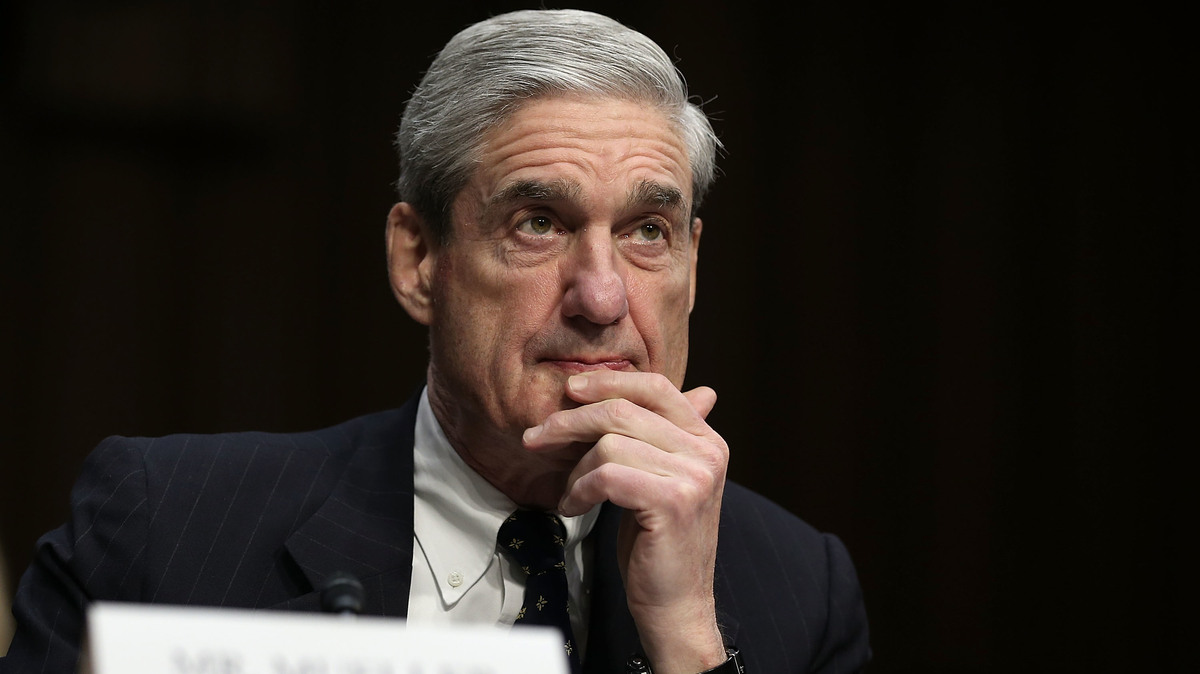 The report was divided into two volumes. Volume I looked at Russia's interference in the 2016 presidential election and its interactions with the Trump campaign. Volume II focused on the president's actions toward investigations carried out by the FBI and by the special counsel.

Mueller concluded that investigators could not establish that the Trump campaign "conspired or coordinated" with the "sweeping and systematic" Russian interference effort.

The report was released only after Attorney General William Barr held a news conference to talk about it.

He told reporters that "no collusion" had been found between the Trump campaign and Russia — repeating the phrase that the president himself has used many times.

Barr also said that the president "was frustrated and angered by a sincere belief that the investigation was undermining his presidency, propelled by his political opponents and fueled by illegal leaks."

Barr said he was satisfied Trump had acted based on "noncorrupt motives" and decided not to prosecute the president for obstruction.

Trump responded following the press conference with a post on Twitter that included an image of himself in a "Game of Thrones" motif with the legend: "Game over."

Trump also mentioned the report at a White House ceremony Thursday morning for veterans taking part in an bike ride sponsored by the Wounded Warrior Project.

Kellyanne Conway, counselor to the president, told reporters following the report's release that Thursday was "really the best day since he got elected" and that "we're accepting apologies today, too, for anybody who feels the grace in offering them."

Leading Democrats in Congress had a very different take on the report.

At news conference in New York, House Judiciary Chairman Jerry Nadler, D-N.Y., said, "Even in its incomplete form, however, the Mueller report outlines disturbing evidence that President Trump engaged in obstruction of justice and other misconduct."

Nadler called for Mueller to speak for himself about his work, in public, to Congress, in a hearing by May 23.

"Special Counsel Mueller's report paints a disturbing picture of a president who has been weaving a web of deceit, lies and improper behavior and acting as if the law doesn't apply to him," they said in a joint statement. "But if you hadn't read the report and listened only to Mr. Barr, you wouldn't have known any of that because Mr. Barr has been so misleading. "

Earlier, leading Democrats on Capitol Hill objected to Barr's giving the White House a preview of the Mueller report and to his convening a press conference before the report was public.

It is clear Congress and the American people must hear from Special Counsel Robert Mueller in person to better understand his findings. We are now requesting Mueller to appear before @HouseJudiciary as soon as possible. pic.twitter.com/Mmo6PA4KPt

Pelosi and Schumer said before the press conference that Barr's "regrettably partisan handling of the Mueller report ... [has] resulted in a crisis of confidence in his independence and impartiality."

Pelosi and Schumer added that "the only way to begin restoring public trust in the handling" of the Mueller investigation is for Mueller himself to testify publicly before the House and Senate "as soon as possible."

Barr said at his press conference that he would let key congressional leaders and staff review a version of the Mueller report with fewer redactions than the one that was released to the public, leaving in place those said to protect grand jury information.

The report says the president's efforts to influence the investigation were mostly stopped by those around him declining to carry out his orders.

On June 17, 2017, the president called then-White House counsel Don McGahn and directed him to tell the Justice Department that Mueller had a conflict of interest and must be removed. The report says McGahn did not act on the order and decided "he would resign rather than trigger what he regarded as a potential Saturday Night Massacre" — a reference to the purge of Justice Department officials during the Watergate scandal.

Several other such instances include Trump instructing his former campaign manager Corey Lewandowski to deliver a message to Sessions to limit Mueller's probe.

And in early summer 2017, the president called Sessions at home and asked him to reverse his recusal from the investigation.

What the campaign knew

The report also describes contacts between members of the Trump campaign and the Russian government as the presidential race between Donald Trump and Hillary Clinton was taking place in 2016:

Trump specifically told investigators that he had no recollection of learning at the time that his son Donald Trump Jr., son-in-law Jared Kushner and campaign chairman Paul Manafort planned to meet with the Russian delegation they hosted at Trump Tower in June 2016.

No one has faced criminal charges in connection with that meeting, although Manafort was sentenced to prison following other conspiracy and fraud charges.