Accessibility links
Columbine Anniversary: Shooting Survivors Band Together To Offer Support Over the past 20 years, mass shootings have resulted in communities of survivors. Heather Martin, who was a senior at Columbine High School in 1999, runs a nonprofit that connects them.

Listen · 4:41 4:41
After Columbine, An Unlikely Friendship Bound By The Trauma Of Mass Shootings 4:41 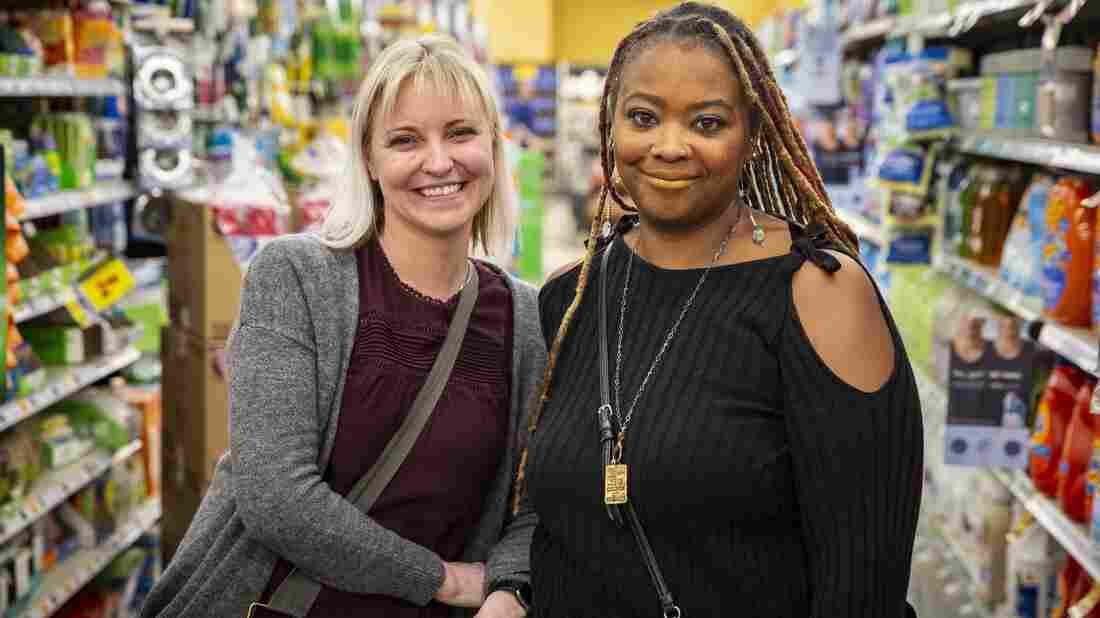 Heather Martin (left) was a student at Columbine High School in 1999. She met Sherrie Lawson, who worked at the Washington, D.C., Navy Yard in 2013 during the shooting there, through Martin's support organization, the Rebels Project. Nathaniel Minor/CPR hide caption 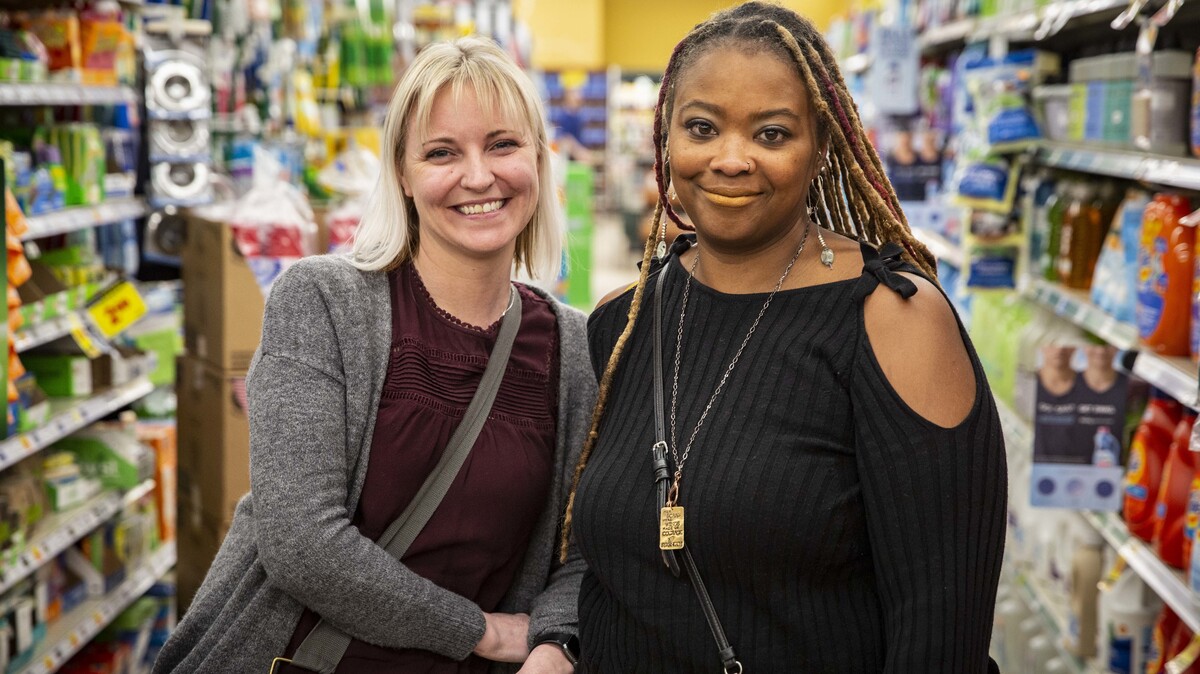 Heather Martin (left) was a student at Columbine High School in 1999. She met Sherrie Lawson, who worked at the Washington, D.C., Navy Yard in 2013 during the shooting there, through Martin's support organization, the Rebels Project.

On April 20, 1999, as two students carried out the deadly shooting at Columbine High School, senior Heather Martin was barricaded in a choir office with 60 other students. It would be several hours before emergency responders found the room and were able to help the group get out.

"I only saw the aftermath," she said. "I didn't see anything as it was happening." But she was shocked to find out that the perpetrators were two of her peers, including one she had grown up with.

It took her 10 years to return to her alma mater.

"I was really scared," she said. "I thought that I would be a wreck." But something unexpected happened. As she walked through the halls with her little sister, she found herself having fun. They took photos and met the children of their classmates. It was less of a memorial than it was a reunion.

"It was great to see everyone and just to reconnect and be around your people," Martin said.

That was a turning point in Martin's life. She founded the Rebels Project, a nonprofit named after her high school's mascot. She and other Columbine alumni visit and support survivors of other shootings across the United States. While professional help is essential, Martin and other survivors say the help they've given one another has made a big difference in their lives.

It took Martin years to get to where she could help herself, let alone others.

In the months after the shooting, which she survived physically unharmed, Martin found that it was all anyone around her wanted to talk about.

An English professor at her community college even assigned a paper on school violence. Martin tried to get out of it.

"And the response I got was just kind of like, 'Well, that's the assignment. You have to do the paper, or you're going to fail the class,' " she remembered.

Heather's life spiraled. She dropped out of college and developed an eating disorder that landed her in the hospital. She dabbled in drugs.

"It was pretty short-lived, but it was definitely a red flag for me," she said. "I wasn't right."

Martin started to see a therapist, which helped her get her life back on track. After her visit to Columbine in 2009, she went back to college and earned her teaching license. Then, after the Aurora, Colorado, theater shooting in 2012, she started the Rebels Project.

Unfortunately, all the time new people were going through what she'd gone through.

In September 2013, a little more than a year after the Aurora theater shooting, Sherrie Lawson was at work early on a Monday morning. She was a contractor at the Navy Yard in Washington, D.C., a massive campus that employs some 15,000 workers.

A little after 8 a.m., the shooting started.

Dealing With Trauma After A Mass Shooting — Over The Long Term

"We ended up scaling the eight-to-10-foot brick wall that surrounds the Navy Yard and running up to safety because the shooter was still actively shooting behind us," she said.

A dozen people were killed. Just a few days later, Lawson was told to go back to her office to pick up her laptop. She took the bus over but couldn't make herself get off at her stop.

"I had to stay on for a couple of blocks and then just kind of had an emotional meltdown in the middle of the sidewalk," Lawson said.

In the months following the shooting, she had panic attacks nearly every day and landed in the hospital with an irregular heartbeat. Her employer was pressuring her to keep working. Lawson said she wasn't physically wounded but was an emotional and mental wreck. She felt like her friends, relatives and co-workers weren't giving her the support she needed.

"If I had a cast on or if I was on crutches, people would be a little gentler around me," she said. "But there's no way to do that when you have this injury that people can't see."

Her physical condition deteriorated, and her social life became nonexistent. In her lowest moment, she contemplated suicide.

And on top of all that, she started to have nightmares.

"And so, one night at 3 a.m., I did this frantic Google search looking for some type of support system," she said.

She found the Rebels Project and sent Martin an email. After six months of correspondence, Lawson flew to Denver for a survivors event. The two ended up sitting in Martin's car for hours talking and listening to Bruce Springsteen — his post-Sept. 11 album, The Rising, was particularly meaningful.

"I feel like I emotionally just vomited all over her car," Lawson said.

Lawson made a decision to fight for her health. And she wanted to do it where she felt like she had meaningful support: Colorado. After living in Washington, D.C., for years, a move to Denver was a big shift — a million dollars wouldn't have convinced her to do that a decade ago, she said.

But she has gotten used to Denver's relatively laid-back vibe. And she's all but made herself part of Martin's family.

Grocery stores can trigger past trauma for both of them, so now they shop together. Part of recovering from a shooting, they say, is not trying to avoid the world — it's relearning how to live in it.

More mass shootings have resulted in more communities of survivors. But not every group is as constructive.

Hayley Steinmuller, a survivor of the Las Vegas shooting in 2017, was part of a handful of Facebook survivor groups. One of them had more than 8,000 people in it, Steinmuller said.

"I thought it was a very supportive group," she said. "But kind of quickly, I realized that it was almost more detrimental to my own healing. There was a lot of negativity in the groups and a lot of people comparing their traumas and what they had been through."

Beyond that, these groups were full of people who'd lived through the same traumatic event; they were all trying to process similar feelings at the same time. The Rebels Project also has a Facebook group, but access is tightly controlled. And its members are more varied; some lived through their traumas decades ago and have developed ways to cope, especially with the challenge of parenting.

"It's so many different stories," Steinmuller said. "But there are common themes for us that help us understand each other."

A friend told Steinmuller about the Rebels Project, which she quickly joined. She left the other Facebook groups and is now planning to move to Colorado for work. The network she has developed at the Rebels Project is a big draw too, she said.

"It's just not anything that I had"

These days, Martin and Lawson spend time traveling across the country together to communities affected by shootings. They've gone to places that have seen high-profile shootings, like Orlando and Parkland, Fla., and to more out-of-the-way locales, like Cedarville Rancheria, a Native American community in remote Northern California.

"We thought we were going to go out there and do a presentation," Lawson said of the Cedarville Rancheria trip. "And we get there, and we ditch the PowerPoint and basically just have a support group meeting."

Lawson said they needed someone to listen — someone who understood what they were feeling.

"We experienced that in Florida when we met with one of the first responders from the Pulse shooting," she said. "He was able to just tell us things that he hadn't been able to share with other people."

Having these conversations is an emotional and draining task. Martin said she has to take breaks and focus on self-care but added that her mission is one that not many others are qualified to do.

"If I can provide that system of support earlier in the recovery just to make that process easier, it's just not anything that I had," she said. "I want to offer it to others."

Martin gets something out of her work too. It forces her to think about her own recovery. That's top of mind right now as Martin and Lawson plan events for the Columbine anniversary. Those are always tough, but Martin said big, round-number anniversaries — like the 20th — are particularly challenging.

"I'm trekking through," she said. "But this one's really heavy."

Lawson said it's her job to step in and help carry the load. She knows she'll need help herself in the fall when her anniversary comes around. And Martin said she'll be there, ready to support her friend.