Accessibility links
Review: 'Hail Satan?' Is Devilishly Compelling The film spotlights the Satanic Temple, an organization that stages wry publicity stunts to underscore the separation of church and state. The doc "makes for an electric modern theological debate." 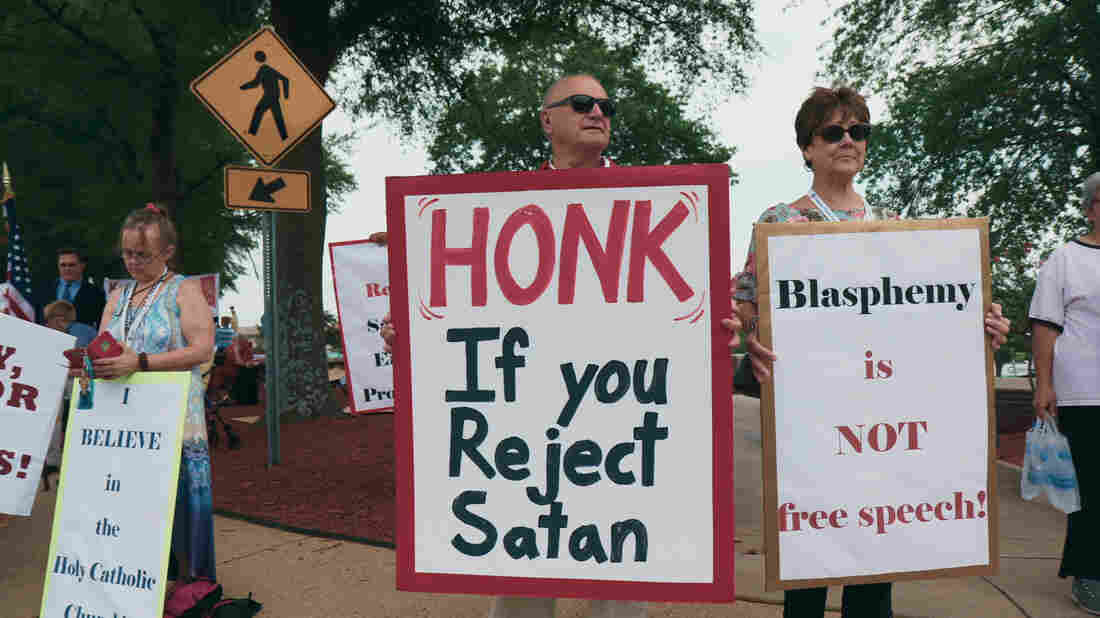 Hail Satan? skimps on some devilish details, but as a profile of the Satanic Temple's efforts on behalf of the First Amendment, it's infernally compelling. Magnolia Pictures hide caption 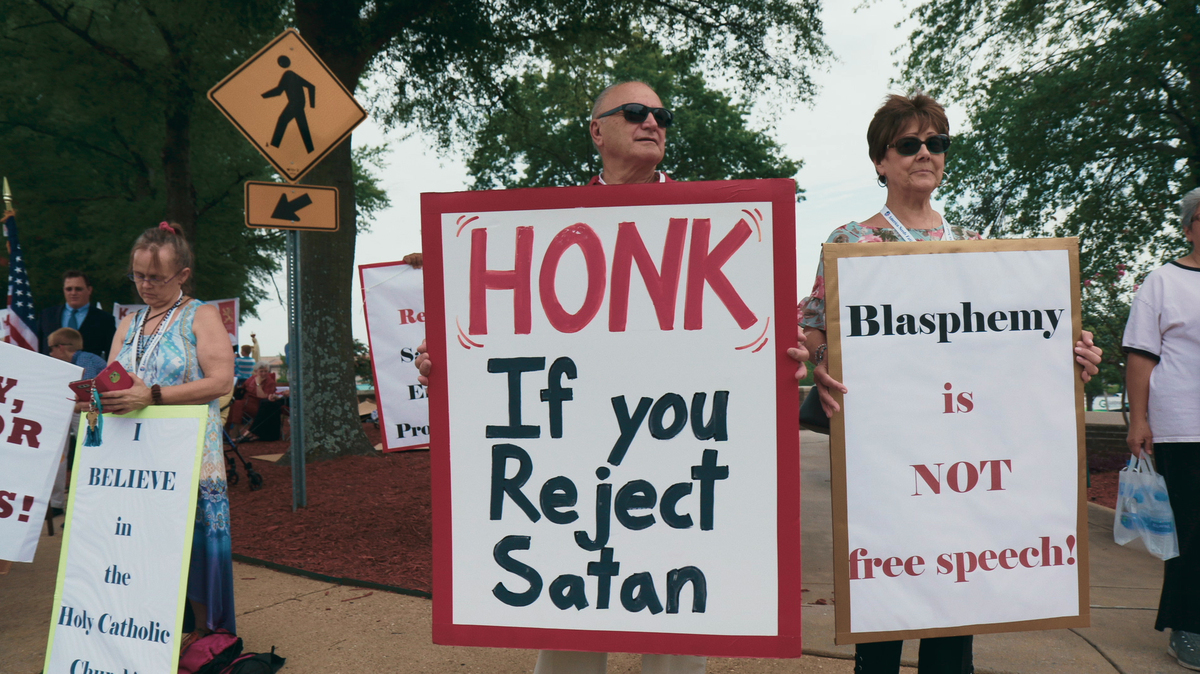 Hail Satan? skimps on some devilish details, but as a profile of the Satanic Temple's efforts on behalf of the First Amendment, it's infernally compelling.

When they write the bible on the great trolls of history, the Satanic Temple should be on the cover. Founded in 2013 as a poke in the eye of religious conservatism, the organization has since transitioned into a fully sincere spiritual movement itself, one advocating principles of nonviolence, religious pluralism, scientific inquiry, individual liberty and Dungeons & Dragons garb. To date, the temple has attracted thousands of members worldwide, people who see themselves as outcasts disillusioned by traditional spirituality but still searching for a sense of community and purpose in their lives. Like Mormonism before it, Satanism has become a distinctly American religion.

And no, they don't really worship evil ... at least, so they claim.

Hail Satan? is a richly entertaining new documentary on the Satanic Temple's exploits from director Penny Lane, who has become one of our foremost chroniclers of bizarro Americana. Her debut, Our Nixon, charted an alternative history of the Nixon White House from the eyes of three of the disgraced president's closest aides, while Nuts! spun the salacious tale of a quack doctor who hoodwinked a gullible public into improving its sex drive with surgically implanted goat testicles. Now Lane steps from our weird history into an even weirder present: a time when state capitals are constructing Ten Commandments monuments on public grounds, and lawmakers are increasingly finding more inspiration from religious texts than from the Constitution.

Into this moment steps Lucien Greaves (not his real name), an activist for the separation of church and state, frequently clad in all-black shirts and sporting a mischievous grin. Along with the considerably more camera-shy Malcolm Jarry, Greaves co-founded the Satanic Temple (in Salem, Mass., naturally) by co-opting the likeness and imagery of Christianity's biggest, baddest evil figure and applying his own philosophy to the Horned One's symbology. So Satan becomes merely an "adversary," not a villain: a metaphor for questioning any kind of authority. And Eve's munching on the apple is celebrated as the moment the human race decided to embrace knowledge and develop a healthy sense of skepticism.

The temple's logic is simple: Whenever a public institution passes a new law on religious freedom grounds, the Satanists believe Satanism should get a cut of it right alongside Christianity and everyone else. So when Florida Gov. Rick Scott signs a bill allowing student-led prayer in public schools, these guys hold a press conference outside the state capitol in Tallahassee, where a horned and cloaked spokesman "thanks" the governor on behalf of all the Satanic children who can now pray in school. And when some public schools start offering after-school Bible study clubs, here's "After School Satan," complete with devil-themed coloring books.

Lane gets a bit muddled with establishing characters in the early going, hindered by her subjects' insistence on pseudonyms. Certain details that informed the organization's principles, like the preexisting separate organization Church of Satan and the "Satanic Panic" reactionary purge of the 1990s, get glossed over to spend more time with the temple's punkish stunts. There's a very good moment when performance artist Jex Blackmore, one of Satanism's most prominent faces and former head of the temple's Detroit chapter, pushes things too far in some of her more ghoulish ceremonies (not for the squeamish, these gore-and-nudity-filled sermons are shot like they actually did rise from hell); she essentially becomes excommunicated. More delving into that kind of conflict could have let us see the humans behind the proudly hoisted devil masks.

Yet as it is, Hail Satan? still makes for an electric modern theological debate, with First Amendment principles and varied biblical imagery clashing in the public square. Sometimes quite literally. In what becomes the film's strongest narrative, statehouses in Oklahoma and Arkansas move to install those aforementioned Ten Commandments monuments. This, in turn, leads the Satanists to construct their own 8-foot-tall statue of a demonic, goat-headed Baphomet and ask that it be placed alongside the tablets.

The showdown builds to one of the wildest moments in any recent documentary: a livestream of a (non-Satanist) free-speech activist mowing down the Ten Commandments with his car as he bellows a very Braveheart-like "Freeeeeedommmmm!"

Freedom has its price, though. Like every other faith collective with growing pains, the Satanic Temple has had to create a hierarchical structure and lay down set tenets for chapters to follow. It can't risk anyone stepping out of line and giving the devil a bad name. But could it become the very thing its adherents despise: an organized religion? Lane leaves the question dangling in the air, but her film raises so many heady ideas that you'll be clamoring for a Second Book of Satan.