Accessibility links
Trump Administration Announces Measures Against Cuba, Venezuela And Nicaragua Most of the measures are aimed at Havana. One change will allow lawsuits against foreign companies operating on property in Cuba that was seized from U.S. citizens. 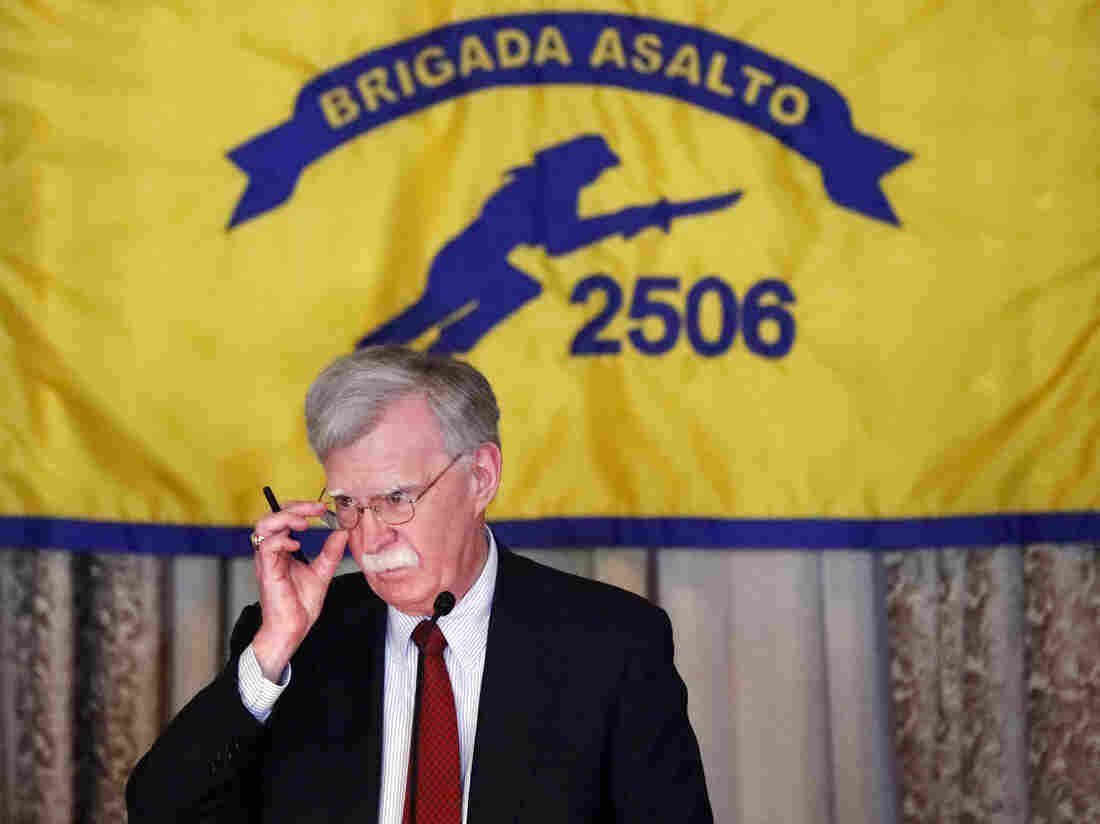 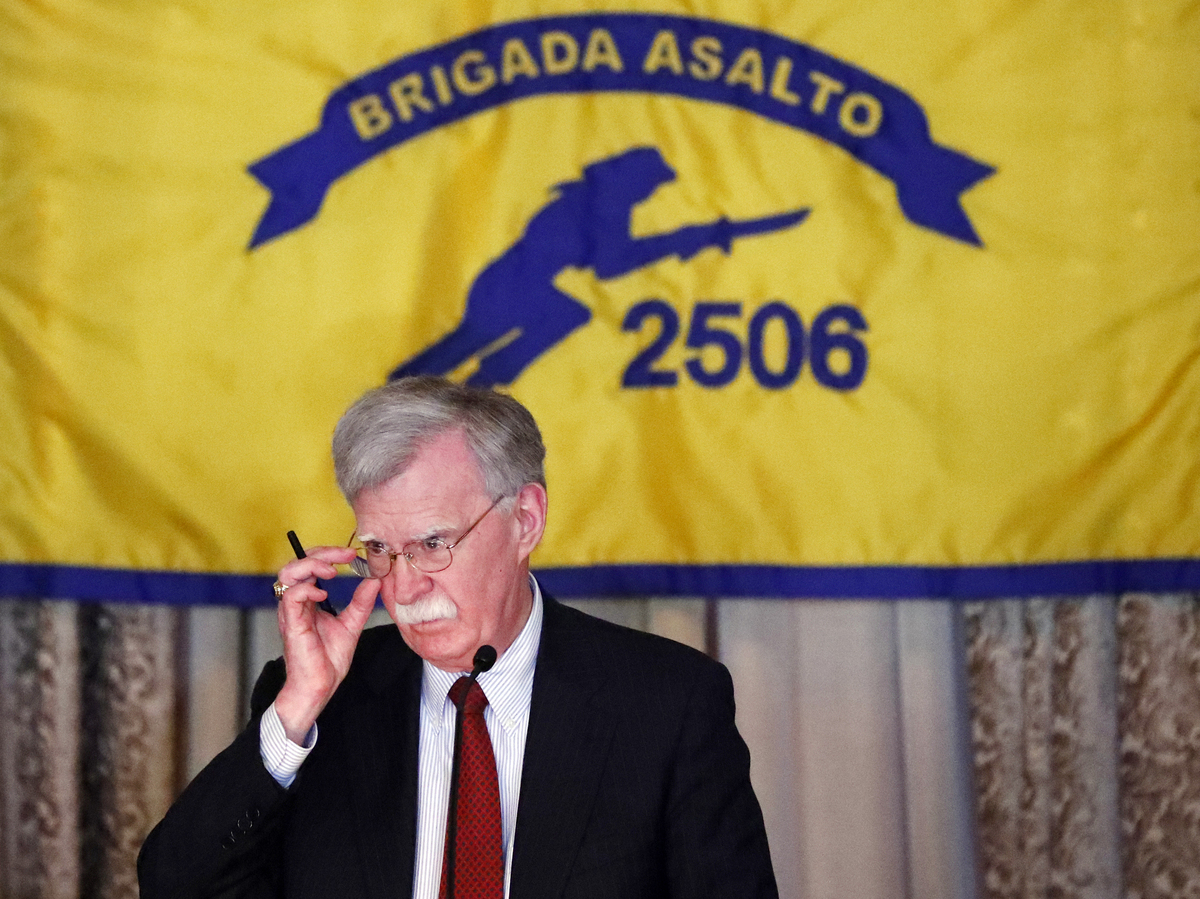 The Trump administration has announced new sanctions and penalties against Cuba, Venezuela and Nicaragua aimed at both ending the rule of Venezuelan President Nicolás Maduro and weakening Cuba's communist regime.

One of the measures will allow lawsuits against foreign companies operating on property in Cuba that was seized from U.S. citizens during the Cuban revolution — a reversal of more than 20 years of U.S. policy.

Announcing the crackdown in Coral Gables, Fla., on Wednesday, national security adviser John Bolton called Cuba, Venezuela and Nicaragua the "troika of tyranny" and said the new measures would "end the glamorization of socialism and communism."

The measures come as the U.S. pushes for Venezuela and the international community to recognize opposition leader Juan Guaidó as interim president.

"This is just the beginning," Bolton said. "As long as the people of Cuba, Venezuela and Nicaragua stand for freedom, the United States will stand with them."

Earlier on Wednesday, Secretary of State Mike Pompeo announced that the U.S. would no longer suspend Title III of the Helms-Burton Act.

That provision allows U.S. citizens to file lawsuits in U.S. courts against foreign companies "trafficking" in property confiscated after the 1959 revolution in Cuba. Previous administrations had a long-standing policy of waiving the provision for six months at a time. But the Trump administration had signaled its intent to tighten the U.S. trade embargo with Cuba earlier this year when it renewed the waiver for only 45 days.

The new policies announced Wednesday also include sanctions on Venezuela's central bank and a financial services provider in Nicaragua that the administration calls a "slush fund" for President Daniel Ortega.

But Havana took the brunt of the measures, which experts say are likely to affect the country's stagnant economy.

Bolton said the U.S. would institute restrictions on "non-family" travel in order to decrease the amount of money Americans spend on tourism in the country, an industry that Bolton said is controlled by the regime.

Tourism is a structural factor in Cuba's economy, and a rush of visitors hit the island when President Barack Obama made it easier for U.S. citizens to make the trip. But the industry has seen a decline since President Trump took office and rolled back several Obama-era policies.

Bolton also announced a cap on remittances to Cuba of $1,000 per person per quarter. The Obama administration had removed remittance limits, and the State Department says remittances to Cuba from the United States amounted to $3 billion in 2016, The Associated Press reports.

One attendee of the speech told the AP he believes the measures announced by Bolton will bring down Cuban President Miguel Díaz-Canel's government.

"Today is a big day," said Rafael UsaTorres, who was a member of Brigade 2506 that worked for the CIA during the failed Bay of Pigs invasion in 1961. "But I feel very sad — too many years waiting."

With End Of Castro Era In Sight, Cuba Prepares To Pass Power To New Generation

Fernando Cutz, who helped shape Latin America policy on the National Security Council in both the Trump and Obama administrations, says that the policies announced on Wednesday are likely to bring hardship to Cuba, but not regime change.

"What we are leading the Cuban people toward is a darker day where there will be less economic opportunity, there will be less of a middle class and essentially just very hard times to come for the people of Cuba," he told NPR's Carrie Kahn.

As NPR's David Welna reports, ending the Title III waiver opens the door to hundreds of thousands of lawsuits seeking billions of dollars from Cuba. According to Robert Muse, a Washington attorney with expertise in Cuban expropriations, the decision will likely trigger a flood of lawsuits against the Cuban government.

"It puts virtually every commercial enterprise on the island in question at this point and subject to a lawsuit," Muse told Welna.

Pompeo called the move a "chance at justice" for Cuban-Americans and urged anyone doing business in Cuba to examine whether they were "abetting" the regime.

"Those doing business in Cuba should fully investigate whether they are connected to property stolen in service of a failed communist experiment," he said.

"No one is going to take away from us, neither by allurement or by force ...," Cuba's Díaz-Canel responded on Twitter. "We Cubans are not surrendering."

Title III is not any worse than Titles I and II, that are part of the array of actions against all the people of #Cuba. No one is going to take away from us, neither by allurement or by force, "the Homeland the forefathers won us standing". We Cubans are not surrendering. pic.twitter.com/rtg70vsSvK

In a joint statement, the European Union and Canada called the Trump administration's decision regarding Title III "regrettable" and said it would have "an important impact on legitimate EU and Canadian economic operators in Cuba."

With regard to Venezuela, Bolton said the state's central bank had been crucial to Maduro's continued rule and that the sanctions imposed on it "should be a strong warning to all external actors, including Russia, against deploying military assets to Venezuela to prop up the Maduro regime." The sanctions do not bar humanitarian aid or private remittances, the AP reports.

And he announced sanctions on Nicaragua's BanCorp, which the U.S. Department of the Treasury said on Wednesday has financially supported President Daniel Ortega and played a role "in corruption and money laundering for the personal gain of the Ortega regime."