Accessibility links
Lee Smolin's 'Einstein's Unfinished Revolution' Looks At The Quantum-Physics-And-Reality Problem A century after the birth of quantum mechanics, no one is sure what it is telling us about the nature of reality — and Lee Smolin's book adds to a stream of excellent works on the topic. 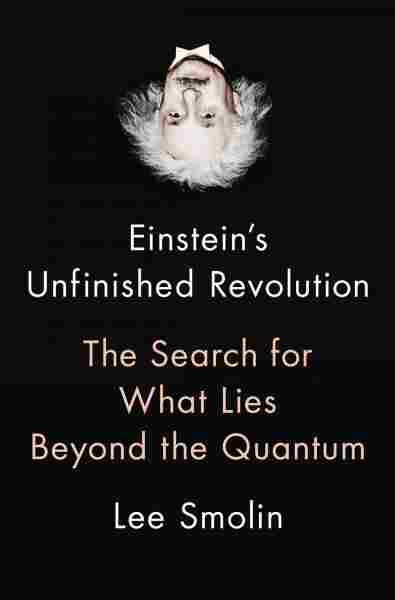 The Search for What Lies Beyond the Quantum

by Lee Smolin and Kaca Bradonjic

If that seems like a weird question to you, consider the fact that it's the one most pressing for physicists and for their most successful theory about the physical world. That theory is called quantum mechanics — and every digital electronic device you've ever used owes its existence to the understanding of atomic-scale physics that comes with it.

But for all its success, quantum mechanics has one tiny problem: No one understands it.

To be more exact, even a century after its birth, no one really understands what quantum mechanics is telling us about the nature of reality itself. That open and uncertain territory is the focus of Lee Smolin's new book Einstein's Unfinished Revolution: The Search for What Lies Beyond the Quantum.

Smolin is an extremely creative thinker who has been a leader in theoretical physics for many years. He is also a gifted writer who manages to translate his own insights about how science works into engaging language and compelling stories. For full disclosure, I've had the pleasure of meeting Smolin a number of times at sciency events and admire his originality and iconoclasm. Both are on full display in Einstein's Unfinished Revolution. The fact that I very much disagree with him and his take on quantum mechanics made my enjoyment of the book even deeper.

Disagreement pretty much defines the debate about the meaning of quantum mechanics, and Smolin's book is the latest addition to a stream of excellent works on the subject including Through Two Doors at Once: The Elegant Experiment That Captures the Enigma of Our Quantum Reality by Anil Ananthaswamy and What Is Real? The Unfinished Quest for the Meaning of Quantum Physics by Adam Becker. As you can tell from the titles, 100 years after its founding, quantum mechanics and reality remains a hot topic.

So, what is the problem with quantum physics and reality? If all you want are calculations for building a laser or a computer chip, the answer is nothing. Quantum mechanics gives physicists hyper-accurate mathematical machinery for manipulating the atomic world to hyper-accurate specifications.

The trouble comes when you ask a simple question like: "What is an atom?" Before quantum mechanics, you could have imagined atoms as little billiard balls. They were tiny "things" which, like the big things we encounter in our daily life, had definite properties like their position or how fast they're moving. They were, in other words, real in the same way we think tables and chairs are real. What that means is that we think that tables and chairs (and the other stuff we encounter day to day) exist independent of us. That makes us, in Smolin's words, Realists about tables and chairs. Smolin thinks this kind of realism is what being a physicist is all about:

"We realists believe that there is a world out there, whose properties in no way depend on our knowledge or perception of it... We also believe that the world may be understood and described precisely enough to explain how any system in the natural world behaves."

Unfortunately, the history of quantum mechanics has made it hard to be Smolin's version of realist about atoms. It's a field is rife with weirdness. For example, in the standard way of dealing with quantum physics if you put an atom in a closed box with a partition in it, then the atom will exist in both sides of the box at the same time. It's only by opening the box (making a measurement) that the atom "collapses" into being in one side of the box or the other. Unpacking the experimental basis for this kind of claim is the point of Ananthaswamy's Two Doors at Once.

How can the atom be in two places at once? And why would the act of looking at it force the atom to choose one side or the other? Let's face it, tables and chairs don't behave this way. So the question becomes: How are we to interpret quantum mechanics? It's the role of measurement, required to give the atom definite properties (like position), that really bothers realists. Measurements and observations are an essential part of the standard Copenhagen interpretation of quantum mechanics established by Danish physicist Niels Bohr. Realists hate the Copenhagen interpretation. So how then can the realism we have about tables and chairs still be held for atomic scale quantum phenomena?

The answer for Smolin is that the weirdness sapping realism from the atomic world is a fundamental problem with quantum theory as it now stands. He sees the weirdness as "gaps and failures" which "underlie the fact that we have gotten only partway towards solving the central problems in science before seeming to run out of steam." For him, there must be a deeper theory waiting to be discovered.

The task Smolin has set out for himself is to show readers that pathways already exist that might lead to a new theory that goes beyond quantum mechanics. To do this, Smolin begins the book with a lucid explanation of the basic rules of quantum theory and where exactly what he calls the "anti-realist" focus on measurements and observations appears. Then he takes readers through a cogent tour of history including a reevaluation of the famous arguments between anti-realist Niels Bohr and the unrepentant realist Albert Einstein. Smolin's particular focus then turns to American physicist David Bohm's and his "pilot wave theory" which never required observers to bestow reality on tables and chairs. The story of Bohm as well as other anti-Copenhagen quantum rebels was also covered adroitly in the Becker's What Is Real?

Einstein's Unfinished Revolution is at its best when it's laying out these foundations for the realist vs. anti-realist arguments. Smolin's description of how quantum mechanics works is both elegant and accessible using real world examples like the order you put your clothes on — underwear first and pants second vs. the other way around — to demonstrate a key principle of quantum weirdness. His description of Bohm's alternative to Bohr's Copenhagen interpretation is also clear and will be helpful for non-scientists trying to understand how these different interpretations sort themselves out and why they matter. If you want to understand the basic issues at hand in these long running debates, as well at least one line of alternative, you will enjoy this book. The last third of the book, where Smolin articulates directions to pursue now, may be a steeper climb for some folks — but it is still worthwhile to see where Smolin believes promise lies.

I deeply enjoyed Einstein's Unfinished Revolution, just as I did Ananthaswamy's and Becker's books. Together they demonstrate how vibrant this debate remains. Part of the fun of Smolin's book, for me, is I am simply not his kind of realist. For me, even the using the terms "realism" vs. "anti-realism" keep us from seeing the steep price every interpretation of quantum mechanics forces us to pay in describing the atomic world. There's no going back to simple pictures of simple tiny marbles bouncing around in space. When it comes to the atomic realm, there is going to be some kind of weirdness. So until we have experiments that separate one interpretation from the other (if we ever do) the real question becomes: Which can of weirdness are we willing to accept?

But Smolin so clearly and expertly articulates his position that Einstein's Unfinished Revolution becomes useful whether you agree, disagree or just want to learn some very cool ideas about physics and reality.