Accessibility links
McConnell Wants To Raise Minimum Age To Buy Tobacco To 21 Citing an "unprecedented spike" in teens vaping, Sen. Mitch McConnell said the bill would raise the minimum age for people to buy tobacco products from 18 to 21. Tobacco companies back the proposal. 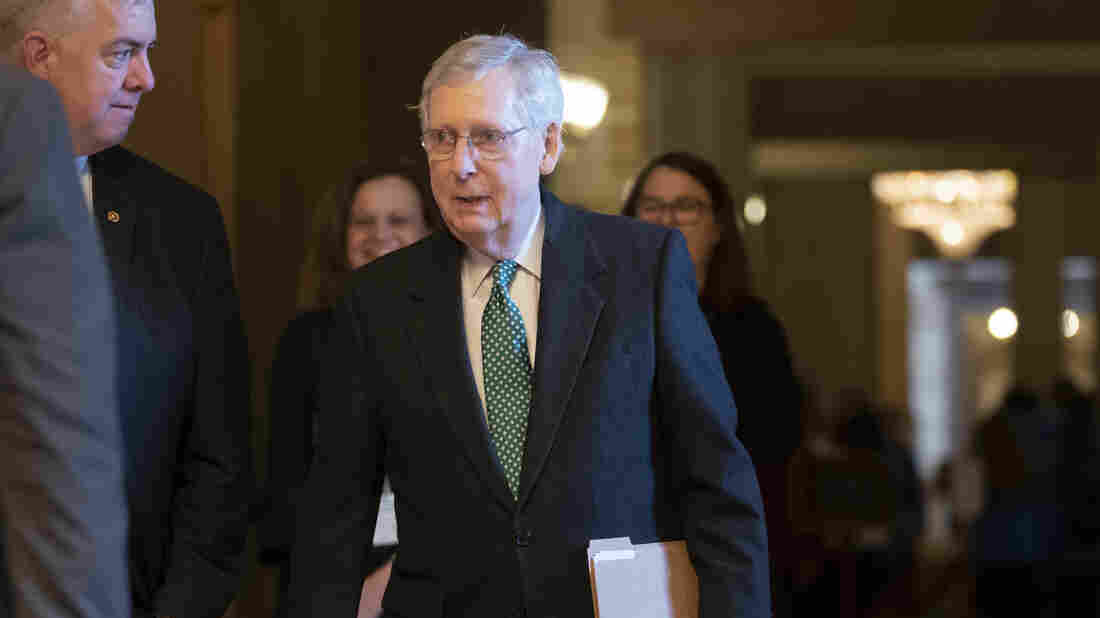 Senate Majority Leader Mitch McConnell, R-Ky., said he was spurred to act because of an "unprecedented spike" in the number of teenagers who were vaping, or smoking e-cigarettes. J. Scott Applewhite/AP hide caption 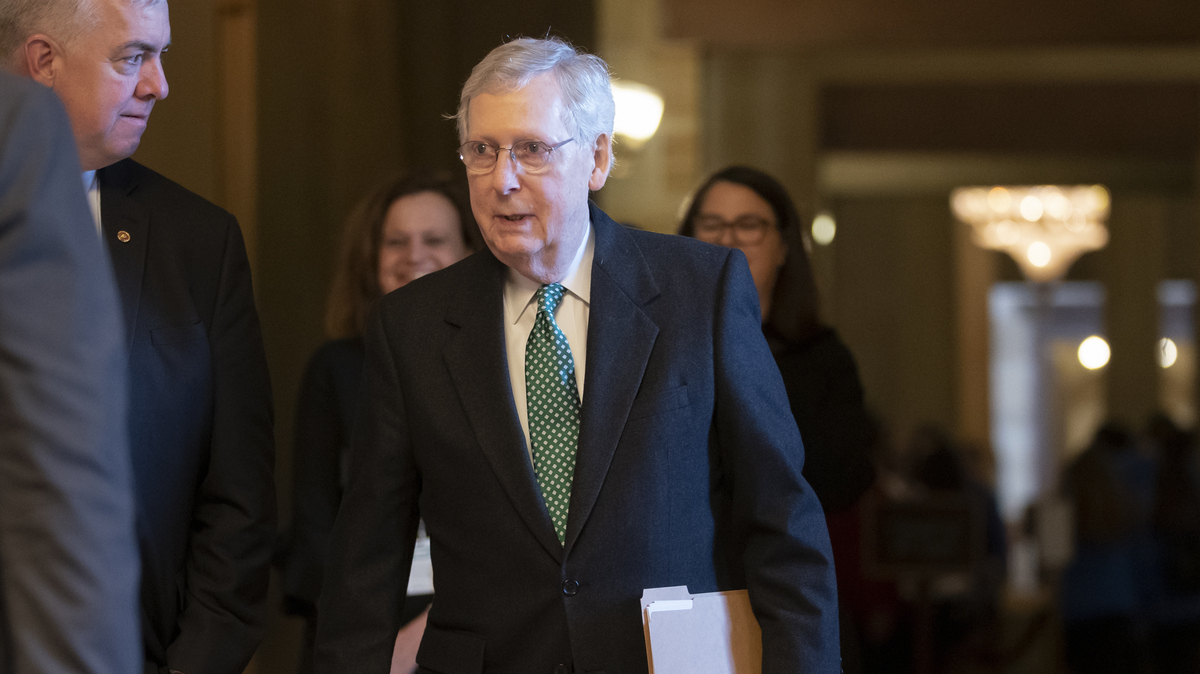 Senate Majority Leader Mitch McConnell, R-Ky., said he was spurred to act because of an "unprecedented spike" in the number of teenagers who were vaping, or smoking e-cigarettes.

Senate Majority Leader Mitch McConnell, R-Ky., announced he will introduce national legislation to raise the minimum age for people buying tobacco products from 18 to 21. Some anti-tobacco advocates worry that the plan could actually harm children by heading off other regulation efforts.

The proposal from McConnell, who hails from a top tobacco-producing state, came Thursday at a conference with the Foundation for a Healthy Kentucky, a Louisville-based organization. He has received more than $160,000 in contributions from Altria, a major cigarette manufacturer.

McConnell said he was spurred by an "unprecedented spike" in the number of teenagers who were vaping, or smoking e-cigarettes.

"We have an epidemic of nicotine consumption either through cigarettes or through vaping in high schools and even middle schools, not only in our state but around the ... country," he said.

McConnell plans to introduce a bill next month. "This is going to be a top priority that I'll be working on," he said.

Twelve states have already raised the minimum purchasing age to 21 with so-called Tobacco 21 laws, according to the Campaign for Tobacco-Free Kids.

McConnell's announcement was met with praise by giants in the tobacco industry, who say they support the age increase. "By raising the minimum age to 21, no high school student will be able to purchase tobacco products legally, adding another hurdle to help reduce social access," Altria said in a press release.

Yet some members of the anti-smoking community are skeptical about what's really going on.

Matthew Myers, president of the Campaign for Tobacco-Free Kids, says the organization does not yet have a position on McConnell's legislation because it has not seen the bill. But Myers said he is concerned that tobacco companies are attempting to include special-interest provisions that would hinder protections for kids.

"Congress must not allow tobacco companies to use Tobacco 21 legislation as a Trojan horse for provisions that benefit the industry at the expense of kids and public health," he tells NPR by email.

At the federal level, a provision introduced by Rep. Robert Aderholt, R-Ala., would allow certain items, such as the heated tobacco product IQOS, to be classified as vapor products, thereby evading stronger regulations than cigarettes.

Stanton Glantz, director of the Center for Tobacco Control Research and Education at the University of California San Francisco, tells NPR that tobacco companies are trying to "co-opt" a movement to protect kids. "They try to get in front of it by introducing bad legislation that preempts good legislation to make it look like they're supporting a pro-health situation," he says.

Glantz says provisions backed by tobacco companies can criminalize youth for buying tobacco products instead of retailers that sell them the products, while other provisions have meaningless implementation language that makes the laws harder to enforce.

"To bring McConnell in, that's like the super, biggest gun you could bring in," he says.

Philip Morris International tells NPR it has applications pending before the Food and Drug Administration to commercialize its product IQOS in the U.S. "Increasing the legal age of purchase for tobacco and nicotine products can play an important role in further guarding against youth use of such products," spokesperson Ryan Sparrow says. "However, that process must first begin with companies themselves."

A spokesperson for Juul, a popular e-cigarette, tells NPR in a written statement that the company supports "category-wide actions to reverse the trend in youth use, while preserving this unprecedented opportunity for adult smokers, and we will continue to work with federal, state and local policymakers in a transparent and collaborative fashion to achieve that goal."

Altria, the parent company of Philip Morris USA, has taken a major stake in Juul.

In an email, an Altria spokesperson says the company backs "straight-forward tobacco 21 bills. ... We remain fully committed to pursuing this legislative goal without condition."

McConnell's state, Kentucky, has one of the highest cancer mortality rates in the country, according to the Centers for Disease Control and Prevention. Along with West Virginia, Kentucky also has the highest rates of death linked to smoking.

The senator says the bill will uphold the current system, which makes retailers responsible for verifying the age of anyone who buys tobacco. The measure will also have an exemption for members of the military, something that anti-tobacco groups have urged Congress not to offer.