Accessibility links
Colombia's Salt Cathedral Is A Marvel Of Architecture And A Popular House Of Worship On Easter, people will gather to pray in the cathedral, situated 600 feet underground in the Andean mining town of Zipaquirá. It was built in the caverns and tunnels left behind by salt miners.

Listen · 3:31 3:31
Colombia's Salt Cathedral Is A Marvel Of Architecture And A Popular House Of Worship 3:31 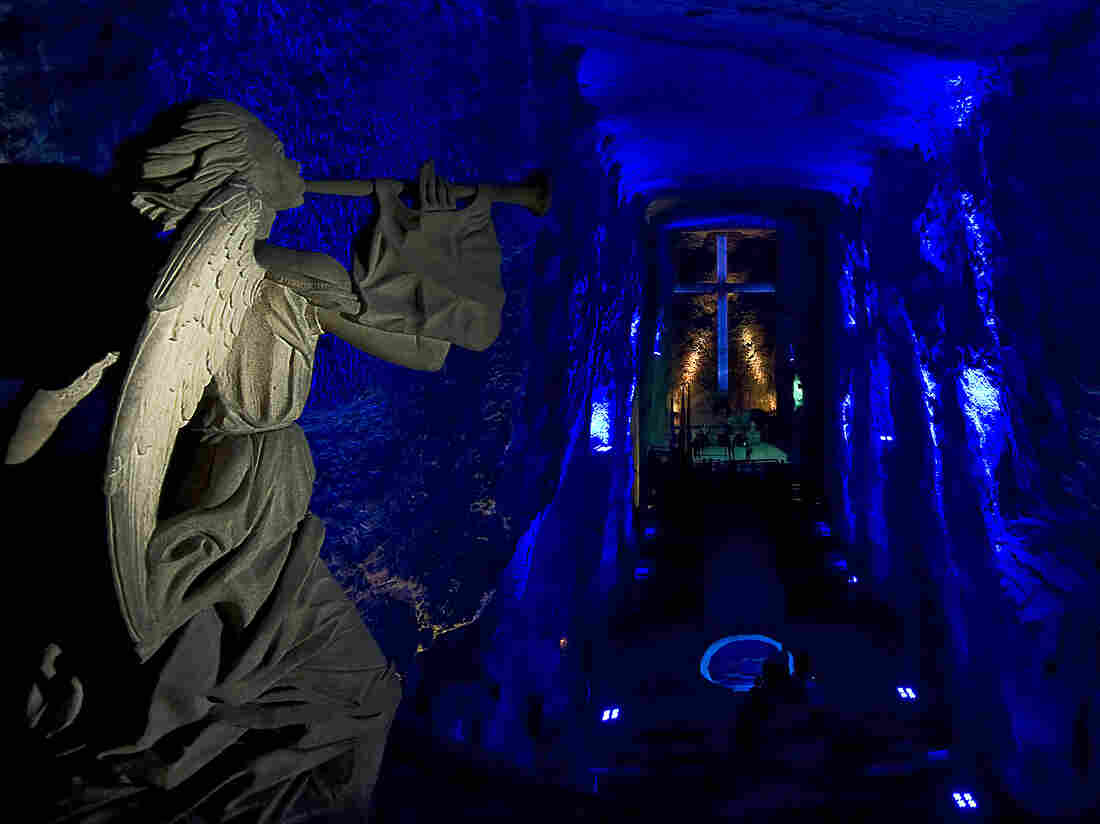 The Salt Cathedral of Zipaquirá is an underground church built inside a salt mine, and made entirely of salt. Luis Acosta/AFP/Getty Images hide caption 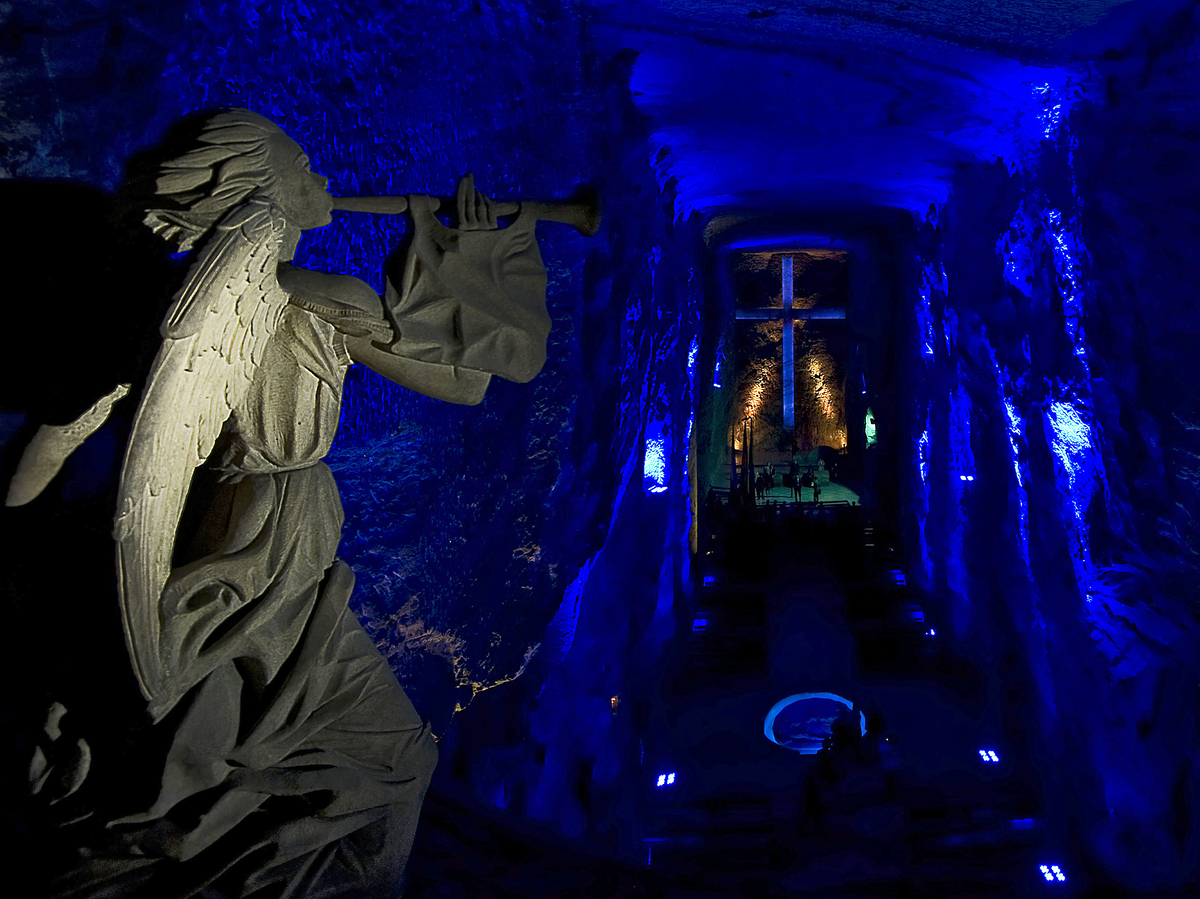 The Salt Cathedral of Zipaquirá is an underground church built inside a salt mine, and made entirely of salt.

The tunnel leading to Colombia's most famous church feels more like a byway into the bowels of the earth. It's dark and dank, with a faint smell of sulfur in the air. But after a few hundred yards, the shaft gradually widens to reveal Roman Catholic icons, like the Stations of the Cross and Archangel Gabriel.

And they're all carved out of salt.

Colombia's Salt Cathedral is located about 600 feet underground, in a former salt mine in Zipaquirá, just outside Bogotá. It's especially busy during Easter, with thousands attending services marking the crucifixion and resurrection of Christ.

But the cathedral is also an architectural wonder, built in the caverns and tunnels left behind by miners, who extracted millions of tons of rock salt starting two centuries ago.

At the bottom, the temple opens up to reveal three naves representing the birth, life and death of Christ. There is a basilica dome, chandeliers and an enormous, floor-to-ceiling cross illuminated with purple lights. The pews are jammed with the faithful and when a choir breaks into song ahead of Mass, the sound envelops the chamber. 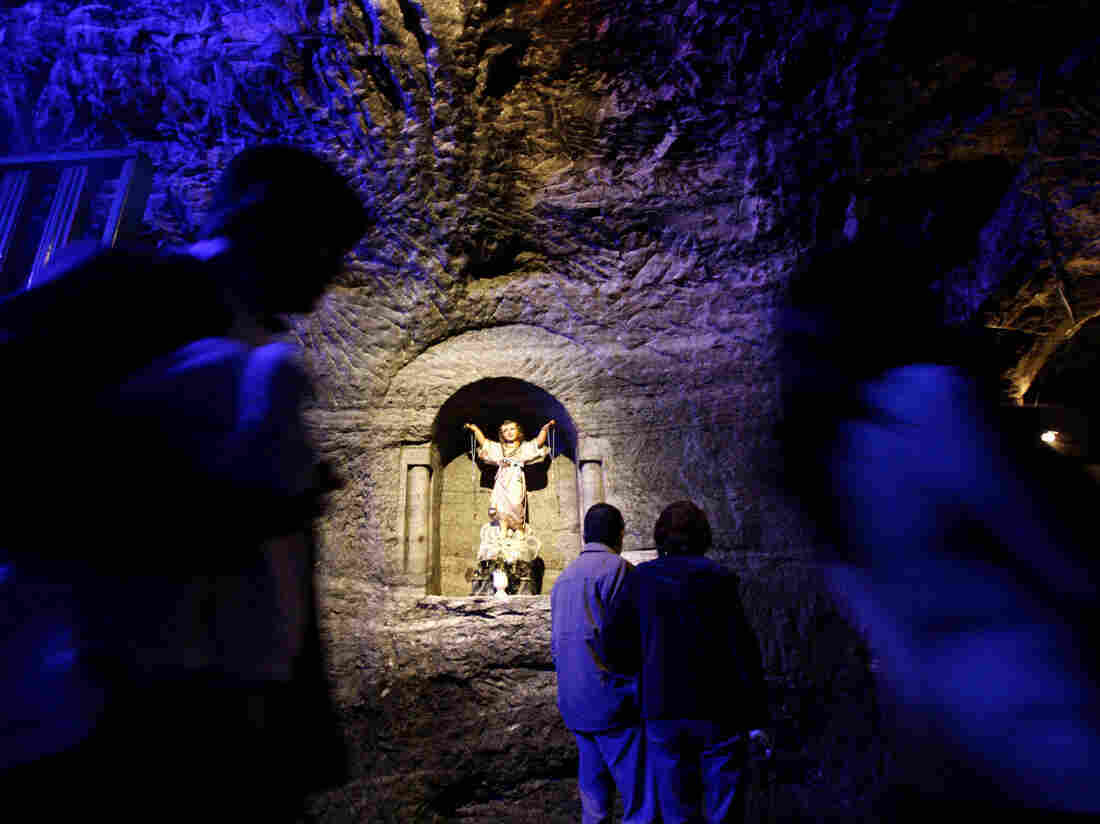 Visitors pass a sculpture inside the Salt Cathedral of Zipaquirá in 2007. Rodrigo Arangua/AFP/Getty Images hide caption 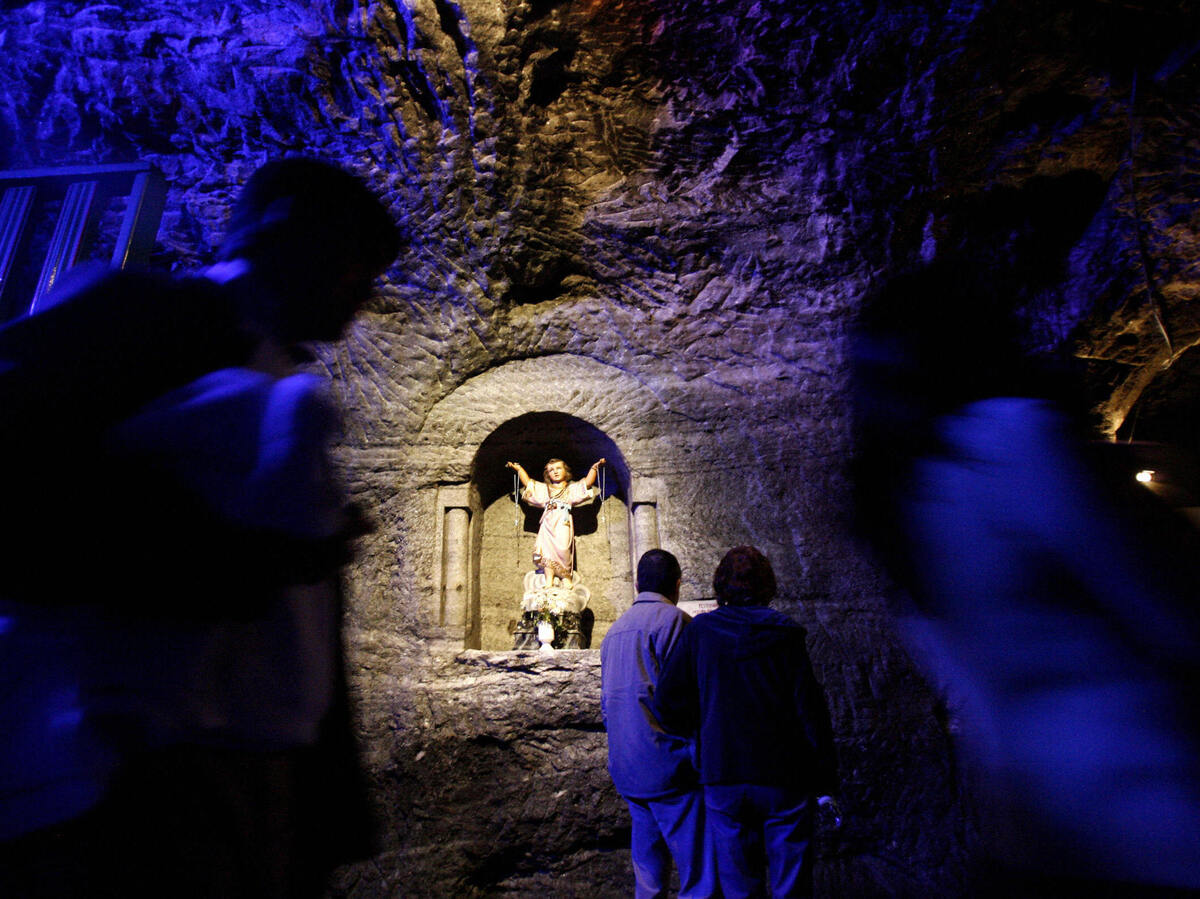 Visitors pass a sculpture inside the Salt Cathedral of Zipaquirá in 2007.

"I found it to be incredibly impressive," said Reagan Jeffries, a Dallas-area schoolteacher, after touring the site. "How do you even make this? How do you bring the equipment down?"

For all of its grandeur, the church had modest beginnings.

Initially, miners prayed in a small sanctuary built inside the caverns. There, they would pray to the Virgin of the Rosary of Guasá, the patron saint of miners, to protect them from toxic gases, explosions and other accidents. That first sanctuary was built in the 1930s. 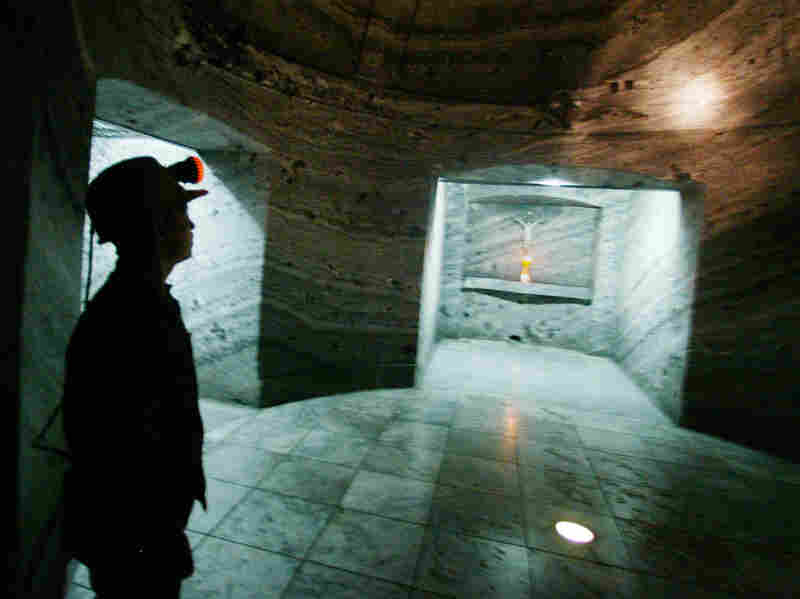 A worker looks for scratches at the Salt Cathedral in 2003. Javier Galeano/AP hide caption 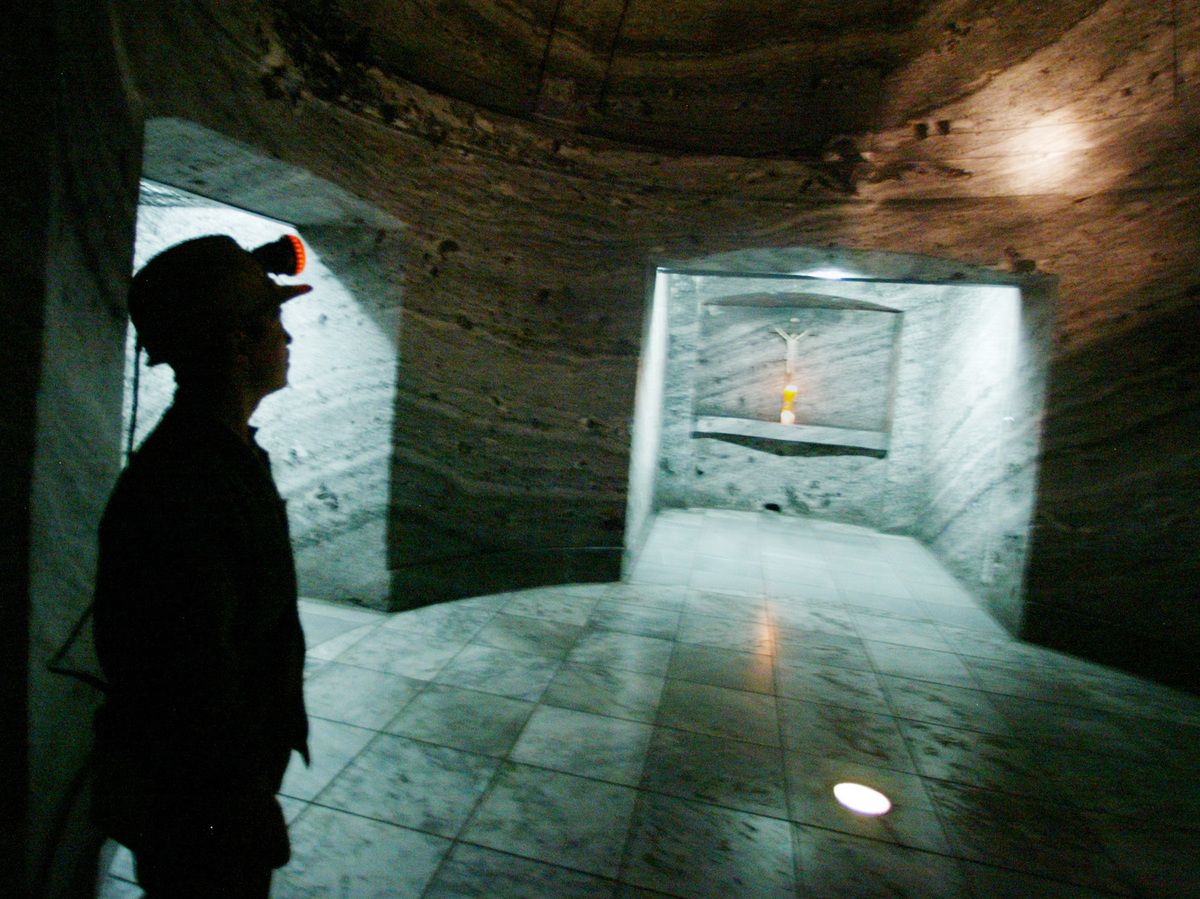 A worker looks for scratches at the Salt Cathedral in 2003.

"The work was very dangerous," Juan Pablo García, a cathedral administrator, said of mining the Zipaquirá salt deposits, where commercial mining began in 1815. "Every day that they came out of the mine alive was a reason for giving thanks."

After extracting salt, the miners left in their wake a vast network of grottoes, pits and passageways. Retired mining engineer Jorge Castelblanco says most exhausted mines are simply abandoned and sealed up. But Zipaquirá's miners and church officials — influential figures in this deeply Catholic country — persuaded the Colombian government to convert the empty spaces into a church in 1953.

Structural problems forced its closure in 1990. That's when Castelblanco, 127 miners, plus a handful of sculptors were brought in to build the current version of the cathedral — located 200 feet below the original cathedral. (The first sanctuary from the 1930s had been closed earlier because it was unstable). 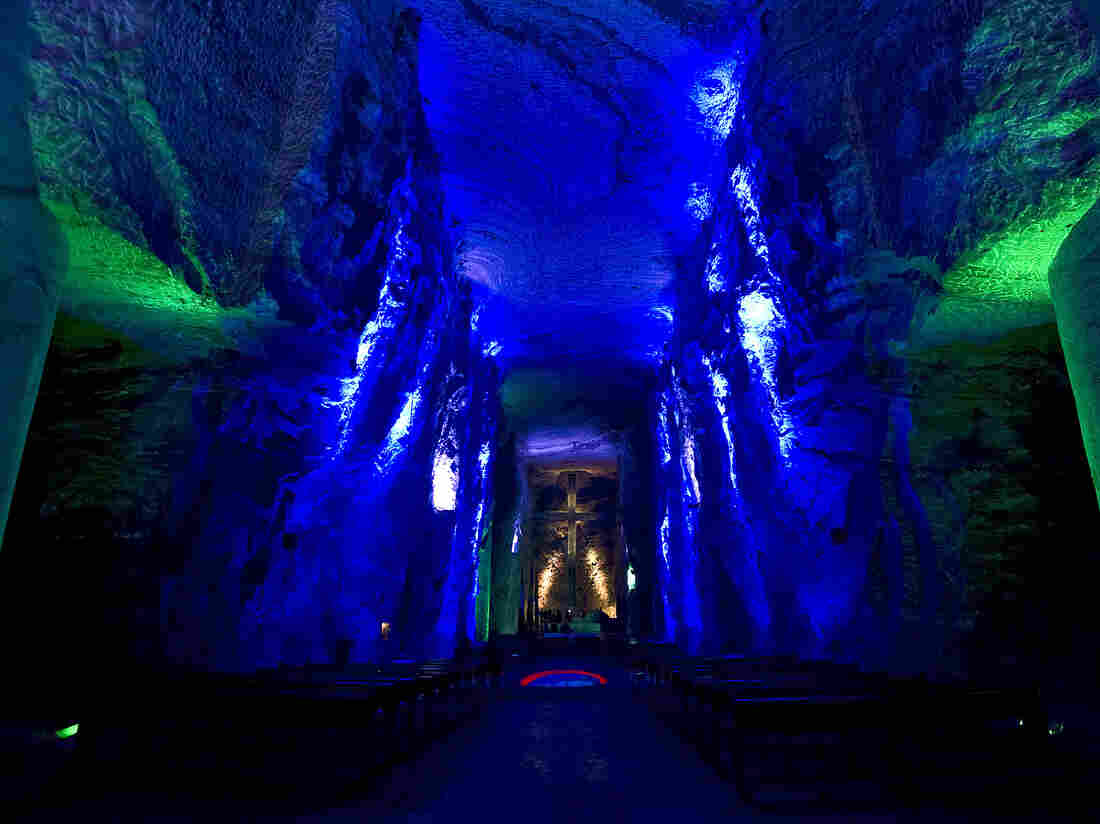 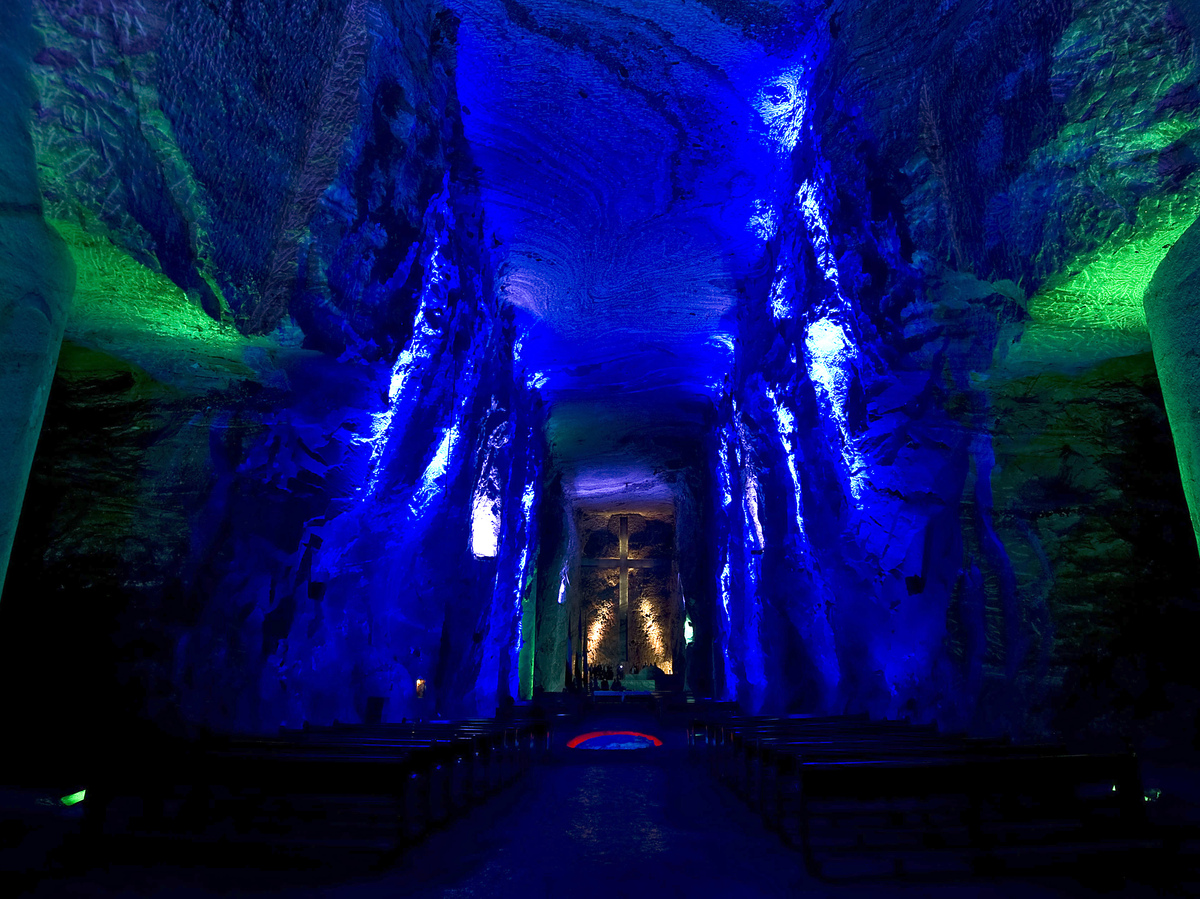 It was a massive undertaking. Just carving the Stations of the Cross into the walls took five years. Another challenge was transferring the massive rock salt altar from the old site to the new.

"It weighed 16 tons," Castelblanco said. Workers had to cut it into three pieces to make the move.

Their efforts appear to have paid off.

"It's magnificent," said Ana Milena Arroyo, a Catholic pilgrim from northern Colombia, after exiting the cathedral following Mass on Palm Sunday. "It's amazing that people had the genius to build this."

And although it's not among the Seven Wonders of the World, Colombia's Congress proclaimed the Salt Cathedral to be "the first wonder of Colombia."