Accessibility links
Book Review: 'Arid Dreams,' By Duanwad Pimwana Duanwad Pimwana is one of Thailand's preeminent female writers, and this newly translated story collection — while not uniformly flawless — lets readers watch her grow into a true master of the form. 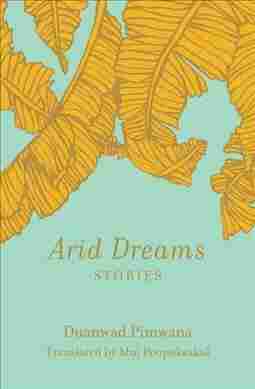 Duanwad Pimwana is one of Thailand's preeminent female writers. She's beloved for her writing across forms, but especially acclaimed for her short fiction, translated for the first time in the excellent 13-story sampler Arid Dreams. Pimwana's translator, Mui Poopoksakul, does a beautiful job with prose and selection alike, offering stories from the first two decades of Pimwana's literary career. As a result, Arid Dreams serves as both an introduction to Pimwana's style and preoccupations, and a sped-up way to watch her grow from a gifted story writer to an utter master of the form.

This is not to say that Arid Dreams is perfect. Its stories range from exceptional to definitively flawed, but its few misfires serve to illuminate the rest of the collection in fascinating and relevant ways. Take "The Attendant," in which a farmer-turned-elevator-attendant laments his new life of silence and enclosure. "A body cannot survive sitting still in a confined area forever, so my limping heart tells me," the attendant protests, and it seems a short story can't, either. "The Attendant" has too slow a pulse to fully succeed. Within Arid Dreams, though, it becomes a marker of Pimwana's abiding interest in entrapment.

In the collection's title story, which is also its newest, Pimwana traps one of her characters on an island, not in an elevator. The narrator of "Arid Dreams" is a Thai man who goes on an island vacation, hoping for a few days of relaxation and some beachfront massages. He's immediately taken with a beautiful young masseuse named Jiew, and once he discovers that she's a sex worker, he becomes determined to sleep with her. She turns him down, though: "I don't sleep with Thai men because the island's a small world ... The fact that I'm a prostitute to westerners [is] something temporary. We meet, then we go our separate ways. But if you're a prostitute in your hometown, that's what you'll be until the day you die." Jiew does not have the resources to leave her island or community. Her only escape is to an imagined future when sex work will no longer be among the conditions of her life.

'Arid Dreams' serves as both an introduction to Pimwana's style and preoccupations, and a sped-up way to watch her grow from a gifted story writer to an utter master of the form.

The narrator of "Arid Dreams" does not push Jiew for sex, but many of Pimwana's male protagonists would have behaved differently. She writes often about straight male sexuality, which appears on a spectrum from patriarchal to predatory. In "Kanda's Eyebrows," the narrator feels "cheated" because his wife, Kanda, stops wearing stylish outfits and a full face of makeup after they get married; in "Men's Rights," a husband named Wasu decides to murder his wife, Namfon, for cheating. Both are surrounded by other men who encourage their behavior, and in both cases, the results are the same: The men are increasingly unhappy, and the women around them are increasingly unsafe.

All of Pimwana's stories operate at a very high emotional pitch. The narrator of "Arid Dreams" tracks his responses to Jiew like a statistician or a Sally Rooney character, noting every slight shift in feeling. In "Men's Rights," she writes Wasu's inner life with such minute detail that he emerges simultaneously as a monster, a tragic antihero, and a pitiable jerk. Perhaps the best example of Pimwana's attention to emotional detail is "The Awaiter," a story in which nothing happens. The protagonist finds three hundred and fifty baht on the ground at a bus station; he stands on the spot for hours, waiting for the money's rightful owner to come and claim it. While there, he ruminates on luck, ethics, and his desire to lead "a life to which others are connected." By the time the story ends, it has transformed into a highly moving reflection on hope in the face of solitude — without a single moment of visible action.

Pimwana is profoundly good at compression. She can turn a moment or gesture into the point at which an entire life turns. Unusually, she's able to do this as both tragedy and comedy.

Pimwana is profoundly good at compression. She can turn a moment or gesture into the point at which an entire life turns. Unusually, she's able to do this as both tragedy and comedy. In "How a Lad Found His Uncle and Learned a Lesson," she revisits the same feminist concerns found in "Men's Rights" and "Arid Dreams," but this time her narrator is a prototypical literary innocent, unable to detect unkindness even in himself. The result is both comic and infuriating, another habit of Pimwana's. Most of the stories in Arid Dreams land in dual emotional territory, nudging the reader to reconsider her laughter in the light of her rage, or her rage in the light of her empathy. Pimwana's skill at creating multiplicity makes her mastery clear. Each of her stories poses its own moral challenge, pleasurable and unsettling at once. Taken together, they are a phenomenal puzzle to read.