Accessibility links
Interview: Peter Bagge, Author Of 'Credo' Cartoonist Peter Bagge takes on the life of another independent woman in Credo, his biography of pioneering libertarian Rose Wilder Lane (also known for being the daughter of Laura Ingalls Wilder). 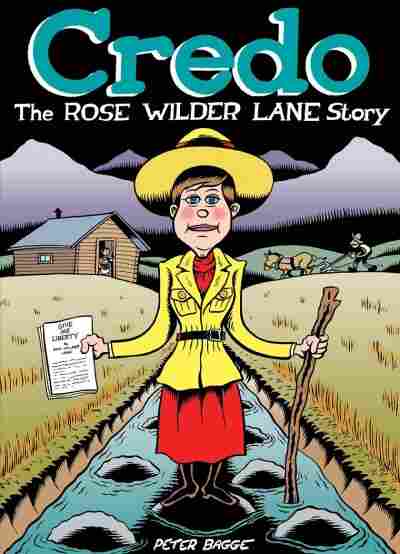 Journalist, novelist and polemicist Rose Wilder Lane may be the most controversial woman nobody's ever heard of. Today she's known primarily for her turbulent collaboration with her famous mother, Laura Ingalls Wilder, on the Little House on the Prairie books. But Lane's story doesn't end there — far from it. A fire-breathing libertarian, she denounced Social Security as a "Ponzi scheme" and grew her own food to protest World War II rationing. From the 1920s through the 1960s she wrote one of the first libertarian manifestos (1943's The Discovery of Freedom), hobnobbed with Ayn Rand, penned six novels and amassed a 100-plus-page FBI file. In Credo: The Rose Wilder Lane Story, cartoonist Peter Bagge illustrates Lane's hurly-burly life in his own inimitable way.

Lane isn't the first controversial woman Bagge has chosen to write (and draw) about — he published books on Margaret Sanger in 2013 and Zora Neale Hurston in 2017. In an email conversation, he told me why he decided to focus on these particular women.

"I was ready to do a book-length comic-book biography, and while reading about people's life stories I noticed there were women during the years around the world wars who pretty much did exactly what they wanted," he says. "It struck a note in me just because there's been — and it isn't just with women, it's with everybody these days — this obsession with safety. You know, 'I don't feel safe,' or, 'Because of how I identify myself, there are people trying to hold me back.' These women never, ever stopped for a single second in doing what they wanted to do. In the back of my mind I thought this would be something of a demonstration of how people could be and — I would argue — should be."

Lane had an intense bond with another powerful and conflicted woman: Her mother, Laura Ingalls Wilder. There's a long-running controversy over Lane's contribution to the Little House books. Was it hard to decide how to depict her role?

It's interesting that it took until, like, the '90s for this to become an open topic, because the evidence of what a heavy hand Lane had in writing those books was right in front of everybody's faces. Wilder didn't have a typewriter and wrote the first drafts in longhand. She'd hand it to her daughter, who would type it. Lane would send it back to her mother and they'd fight like cats and dogs, but the last draft that was sent to the publisher was always typed. And you could see the different writing styles.

How was Lane as a writer?

She was very good, but her writing is inconsistent. She could be a hack. My favorite book of hers is Old Home Town, a collection of short stories about what it was like to grow up in a small town like Mansfield, Missouri. To me that's her masterpiece.

Another book that is fascinating is 1919's Diverging Roads. It's this feminist shout-out. She describes herself as a feminist throughout, and it's all about discovering herself and becoming independent. Her attitude was that professional women should encourage each other to stick with their careers, as she did throughout her life.

You depict the intense friendships she had with other women, but it's only in the book's back matter that you write, "the current consensus among people who closely follow her work is that she was bisexual." Why didn't you focus on that in the main part of the book?

It's shocking how a lot of the topics she wrote about still come up.

Mainly because that is literally the first time it's ever been discussed in print. When you read her biographies you're like, "All these intimate, close, long-term relationships — it feels like they're more than just pals, you know?" The problem is that there is no hard proof. Other authors didn't even want to speculate in print. So I felt it was reckless for me to put it in the comic.

It was fun to see Lane hashing over ideas with Ayn Rand. How do you think they influenced each other?

It was the two of them and a third woman, Isabel Paterson. They bounced their ideas and arguments off each other, and it emboldened them. It wasn't a coincidence that, around that same time, the three of them all wrote books espousing their political views.

Lane was also engaged with the politics of race at the time, since she wrote for the African-American newspaper The Pittsburgh Courier. What did she write about?

It's shocking how a lot of the topics she wrote about still come up. She talked a lot about redlining and how difficult the whole economic structure, between banks and governments, made it for black communities to progress. She wrote a lot about the over-policing of black people — things you still hear about all the time today.

Between her political stridency and her personal quirks, Lane isn't always lovable. Do you worry that readers won't like her?

I really struggled with that. She was a very flawed person. She was temperamental, she suffered from very severe mood swings. To me it made her ridiculous, which was part of the fun of doing the book. I had a lot of laughs while reading and writing about her. But yeah, it's still a mystery to me how readers will respond.