Accessibility links
Inside The Mueller Report, This Man Saw A Photo Of His Dad Being Used By Russians Coal miner Lee Hipshire was photographed in 1976 emerging from a mine after a long day's work. Years after his father's death, his son found out the photo was used by Russian trolls to support Trump. 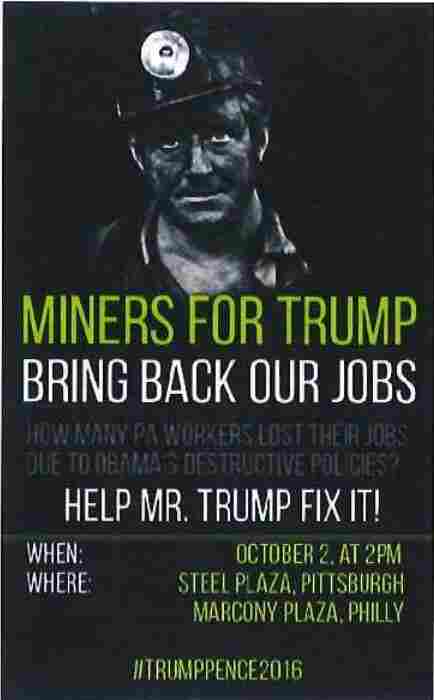 When the Mueller report was released, Ronnie Hipshire was surprised to find a photo of his father Lee on a poster to support President Trump that was created by Russians. Screenshot by NPR hide caption

When a redacted version of special counsel Robert Mueller's report on Russian interference in the 2016 election was released to the public and Congress on Thursday, the effects of Russian influence efforts through social media became clearer.

Part of the information in the report included examples of material that Russian trolls used, and one particular image stood out to Ronnie Hipshire, a retired coal miner in West Virginia.

On Page 31 of the Mueller report, Hipshire saw a photo of his father, Lee, a coal miner who died of complications from black lung disease, on a poster for a "Miners for Trump" rally in Pennsylvania. The Russian troll farm called the Internet Research Agency had used the photo, without the family's permission, for a pro-Trump poster.

In the photo taken by photographer Earl Dotter, Lee is seen after what Hipshire says was "a hard day's work" as he emerges from a mine in Logan County, W.Va. His shift had ended, and the grit of his mining work covered his face. It's a striking image, but one that Hipshire says his father would not have wanted used to support President Trump.

"What I didn't like about seeing this on the Mueller report is them stealing my dad's picture and putting it on a Trump campaign rally," Hipshire said in an interview with NPR's All Things Considered. "My dad was one of the most staunch Democrats that you'll ever see in your life, and he never would have even thought about putting his face on something like that. It just was beyond me to see it."

Dotter is the one who told Hipshire the photo was included in the report. Hipshire says neither he nor Dotter would have given permission for the photo of Lee to be used in material to support Trump.

But if the circumstances were different, meaning Hipshire had given his permission and the promotion was for a political issue that he advocates for, Hipshire said he would approve of the image being used.

He doesn't want this to continue to happen, but is frustrated.

"I don't know what you would do to keep them from doing it," Hipshire says. "If they can get in and steal stuff like this, how can they — how could you block the Internet down? I mean, I don't know."

This story was produced and edited for radio by Nell Clark and Tinbete Ermyas.